The geography of Russia is a rather complicated thing, simply because of the fact that the country is so huge. Since childhood we hear so many geographical names, but even for an avid traveller it is a challenge to point a certain city or a region on the map of Russia.

The "South/East" geographical belt of Russia (the Sayan Mountains, Altai, Baikal, Primorye) is widely known, but still many people are not aware that Moscow and Petropavlovsk-Kamchatsky are situated on the same latitude. As for me, I've always been interested what the great spaces of the Russian North are like. The names of the Laptev Sea, the Kola Peninsula, the Barents Sea, Tamyr Tamyr,Russia , Chukotka Chukotka,Russia , Yamal Yamal district , the Kara Sea have been so attractive to me since I was a kid. 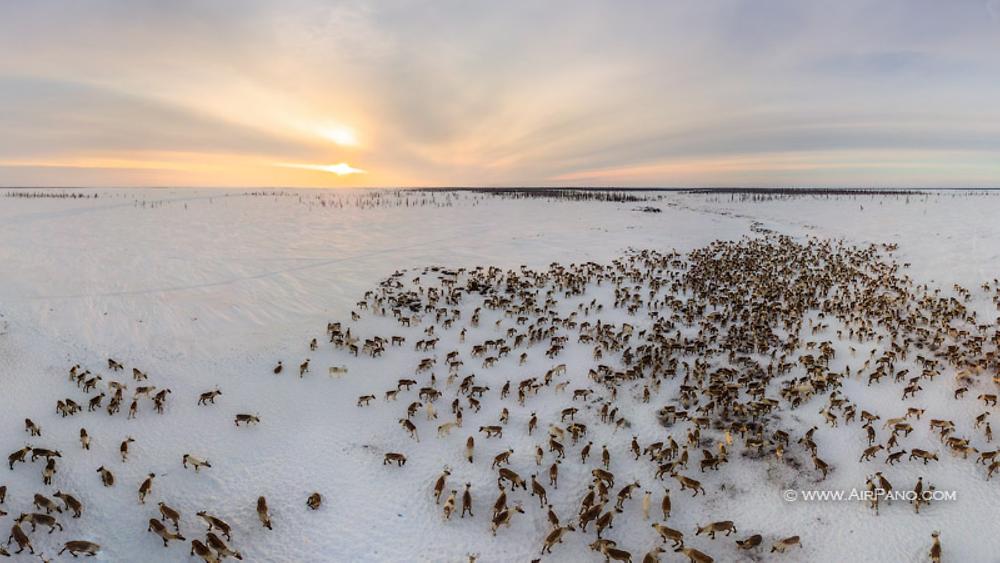 Every area or region needs to have its own "poet". He would make some good photos, publish a couple of books and soon people would express a strong desire to see the place with their own eyes. The Yamal Peninsula has its own "story-teller" in the person of Sergey Anisimov. And when he invited me to visit the places glorified by him, I did not hesitate.

The Yamal Peninsula is a part of the Yamal-Nenets autonomous district lying on both sides of the Ob River in its widest part just before flowing into the Kara Sea. The landscape of Yamal is mainly tundra and marshes; forests grow only in the south of the region. Development of gas production is the key feature of the local economy. Locals (Nenets and Khanty) are occupied by reindeer herding and fishing. Salekhard, the capital of Yamal, is one of the biggest cities of the region. It is a cozy city with the population of around 50,000 people. 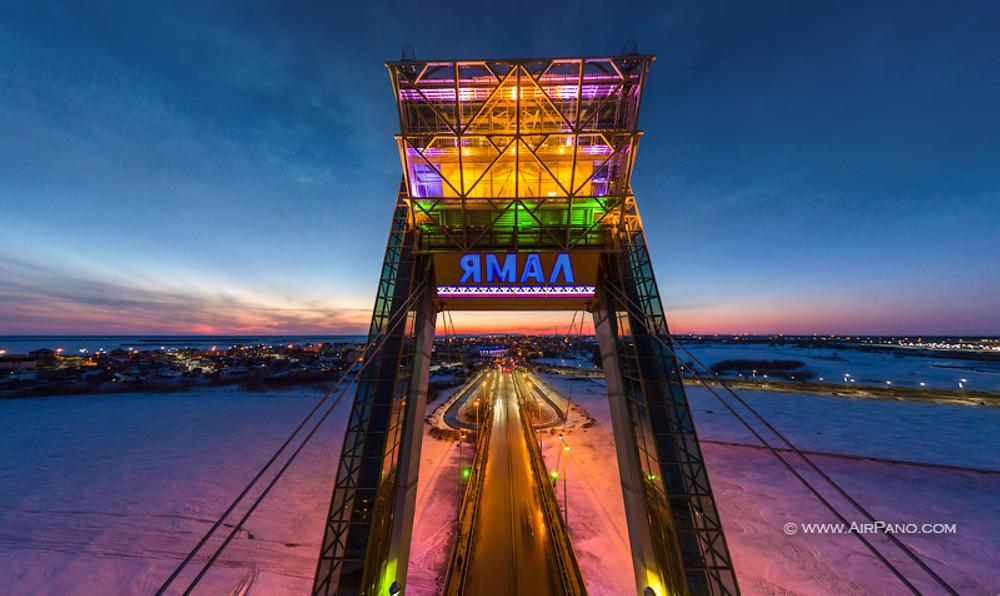 My flight from Moscow to Salekhard lasted 3 hours. On the first day of my arrival we attended a local photo-exhibition and in the evening we went to an unusual restaurant "Yamal" built on piles of a bridge across the river. We also decided to include the sight of the northern lights in the virtual tour, although we had to drive 30 kilometres away from Salekhard. In addition to bright colours not spoiled by city lights, we also longed for the interesting and more authentic atmosphere with chum-tents in the foreground. 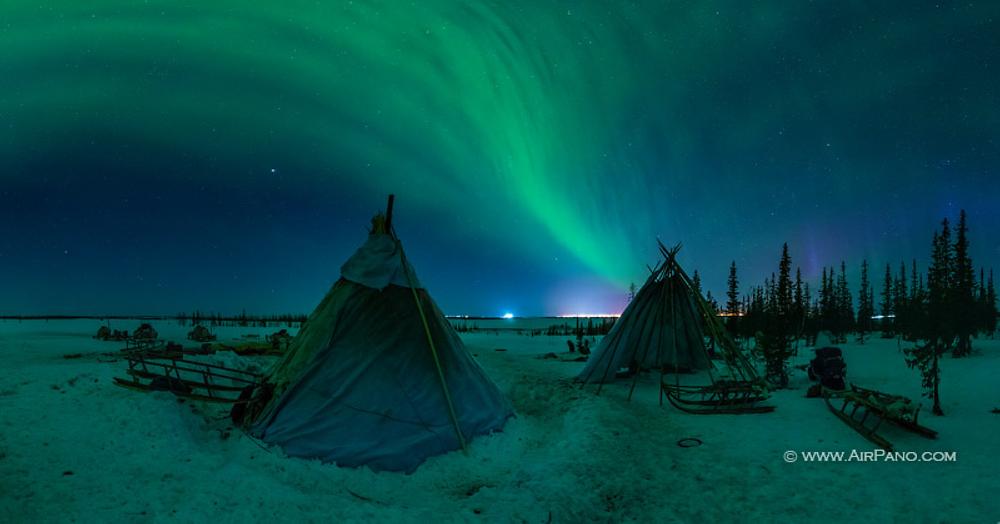 Northern lights above the chums
© AirPano

Our next aim was to visit the event named "The Day of the Reindeer Herder" in Aksarka village. Representatives of local people come here for the communication, to take part in the trade and the competitions. And the latter was just the key moment of the whole event, as the winners of the competitions were awarded cash prizes. 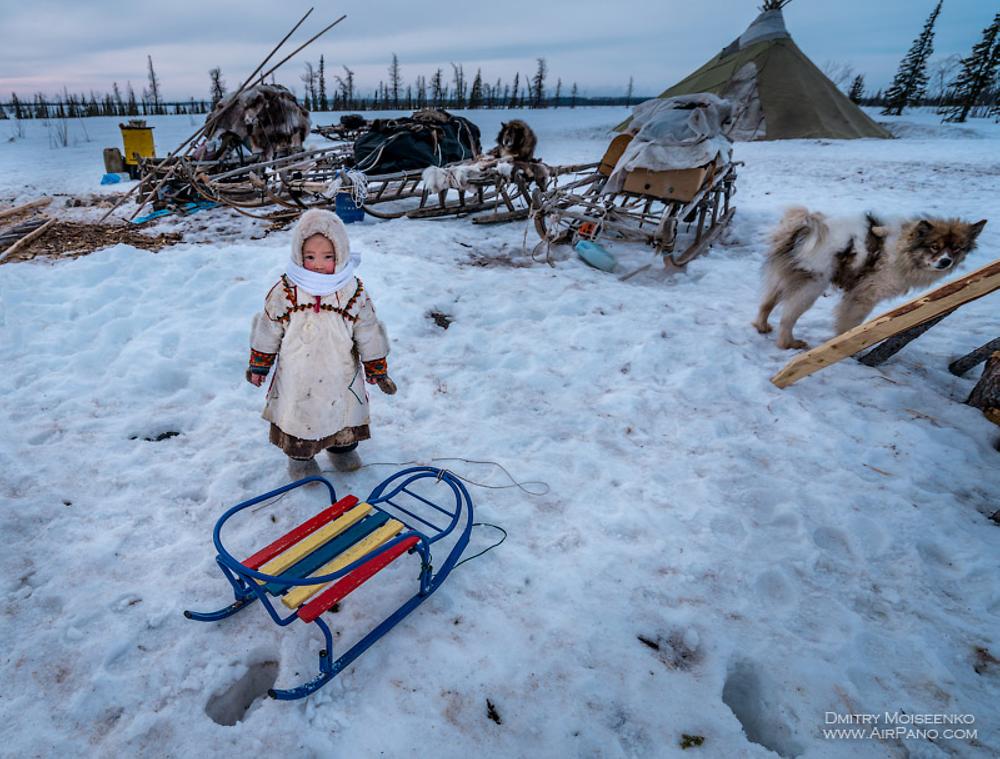 To my surprise, the "Stick-tugging" competition turned out to be a dynamic and challenging action, even being just a slow-moving opposition of two people: in a sitting position, they pressed their feet against each other, took a stick and pulled it, each to his own side. Traditional wooden skis together with a peculiar kind of oar were used for ski-racing. But the highlight of the whole day was a reindeer race. Not all the participants managed to successfully finish the race: several teams were driven aside for some reasons, others seemed not to hurry at all. 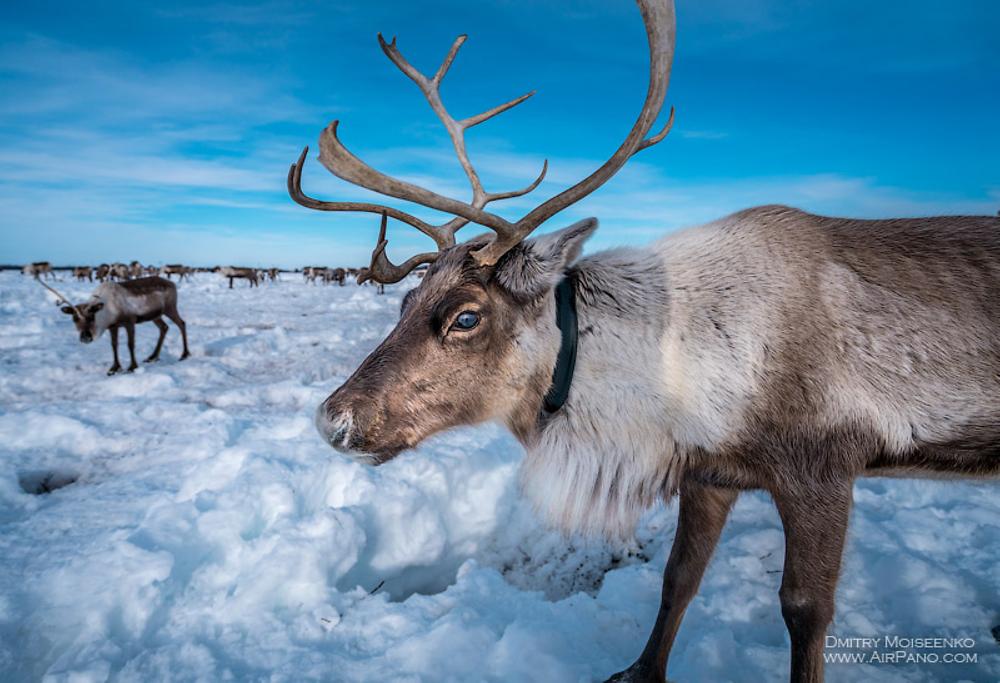 Most of the reindeers turned out to be good "models" to take pictures of. To make some good photos, we decided to have a position with a view of a barrel that served as a turning point on a lap, while Sergey decided to stand right at the barrel. But the very first sledge of reindeers was so excited and engaged in the process of "posing" that it lost its way and crushed the barrel where Sergey was hiding. 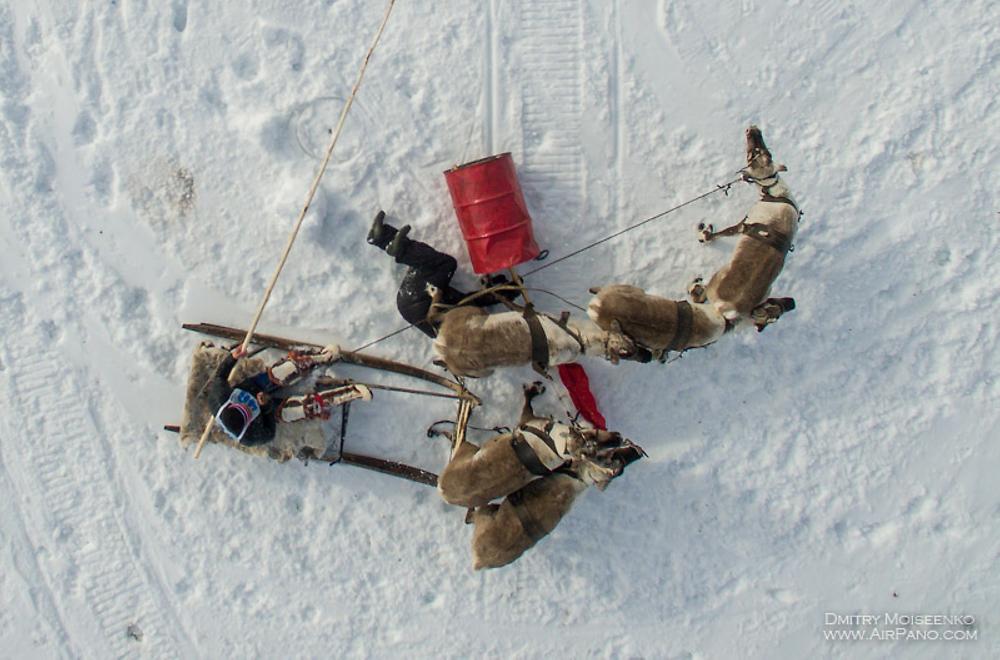 Fortunately, both Sergey and his camera were safe and sound. Moreover, he managed to make, in my opinion, the best picture of reindeers smiling right at the camera. 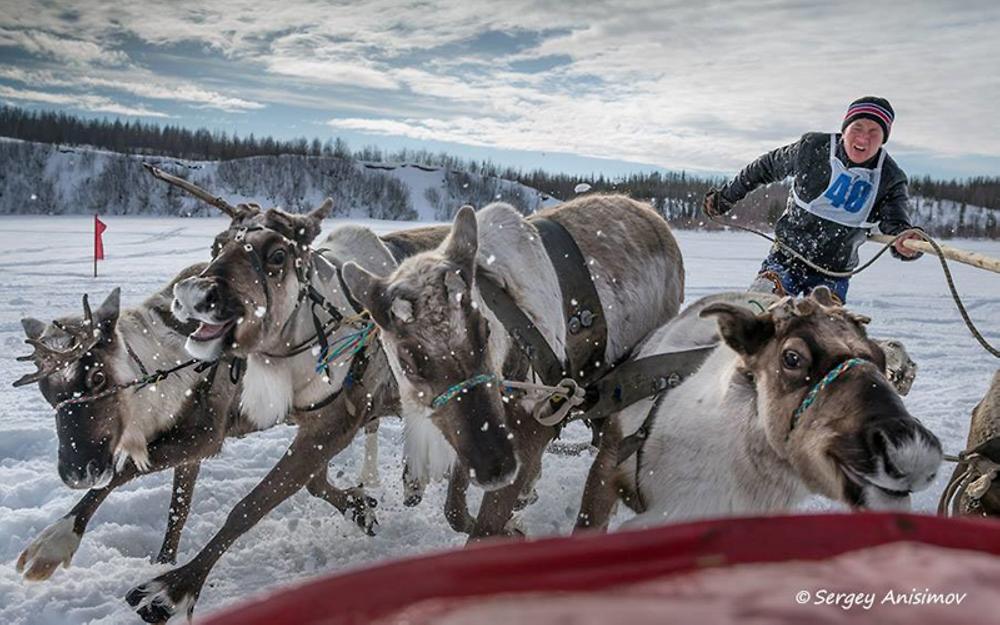 After that, we went to visit chum-campings and reindeer pastures. We were aware that photographers were invited only to the specially selected nomad-campings following the beaten tracks. But even while riding a specially equipped cross-country vehicle, we got stuck several times. At the end of an adventurous day, we finally found ourselves standing in a forest near several chums. One of them was our accommodation for the night. The tent was heated by woods, so we felt quite comfortable in our sleeping bags. But, on the other hand, how could we sleep when there was a hope for a northern light! But the sky was overclouded and we spent our passion for taking pictures of sparks in a stove. 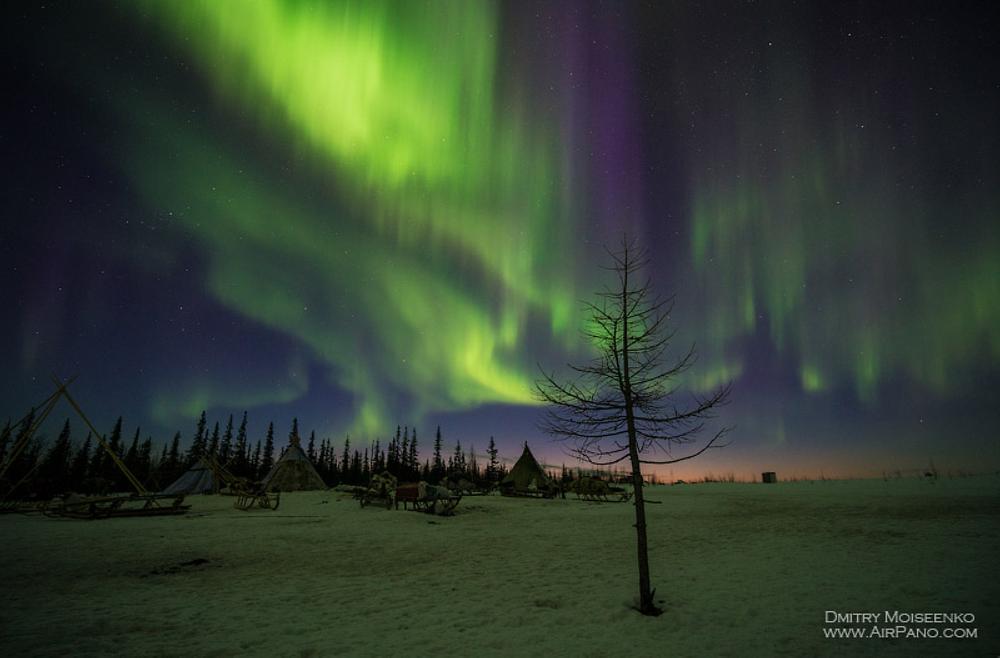 In the morning we went to herd reindeers together with the owners. Imagine, several thousands of animals, what a sight! In winter reindeers eat lichen lying under the snow and from time to time the herders have to change the emptied pastures. That's how the day passed: riding a snowmobile and chasing the herd. I was amused by several "domestic" reindeers that were kept in stock stands, like dogs. 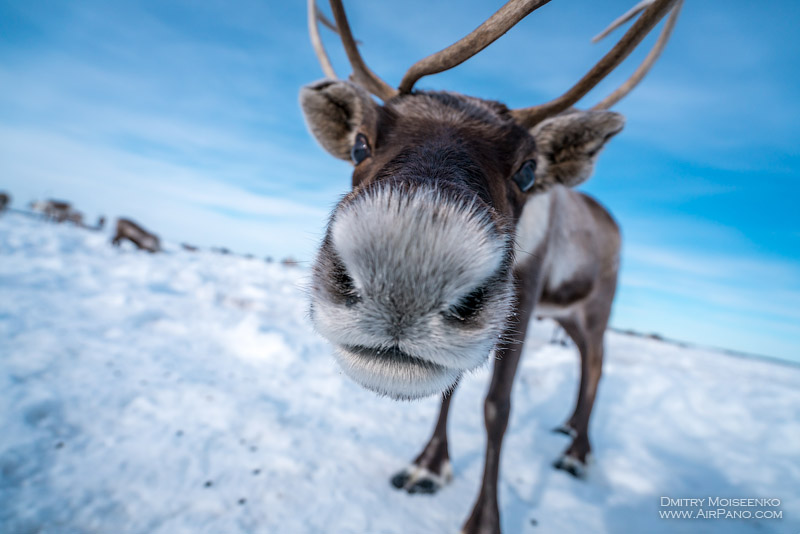 Having thanked the owners, we again sat in our cross-country vehicle and started our way back. Several days in Yamal were truly bright and adventurous, in addition, I have brought some interesting material to share.