Almost every year my family goes to Krim (also known as Crimea) for a summer vacation. Two years ago I was fortunate to shoot several aerial panoramas of the city of Sevastopol. Unfortunately I didn't have enough photo materials for a complete virtual tour, so my photographs ended up in an archive. At that time even I couldn't imagine the circumstances in which I would have to go back to photographing the city.

I went to Crimea with Ilya Varlamov, a famous Russian blogger. I have to say that our first attempt to fly to Simferopol failed. Our Aeroflot flight was cancelled because airspace above Crimea was closed off. Mass media reports on the situation in Ukraine became more and more unsettling, and I even though of cancelling the entire trip. However, my adventurous nature took over and we arrived to Simferopol, the capitol of Autonomous Republic of Crimea, as soon as they opened airspace for civilian flights.

It was already springtime in Crimea. Busy streets of Simferopol were lit by the gentle southern sunlight. We didn't see military personnel even in the city center near the Council (Rada) of the Autonomous Republic of Crimea. Cossacks and people's militia maintained order on the streets.

As soon as we arrived to Sevastopol, we tried contacting city officials to get support in our photo sessions. Our attempts failed, but we were used to that by now. We went online, posted our request on one of the local Internet forums, and immediately received help. Denis and Pavel, local professional photographers specializing in shooting panoramas, offered to be our guides. They also assisted us in accessing museums of Sevastopol to shoot on their territory. 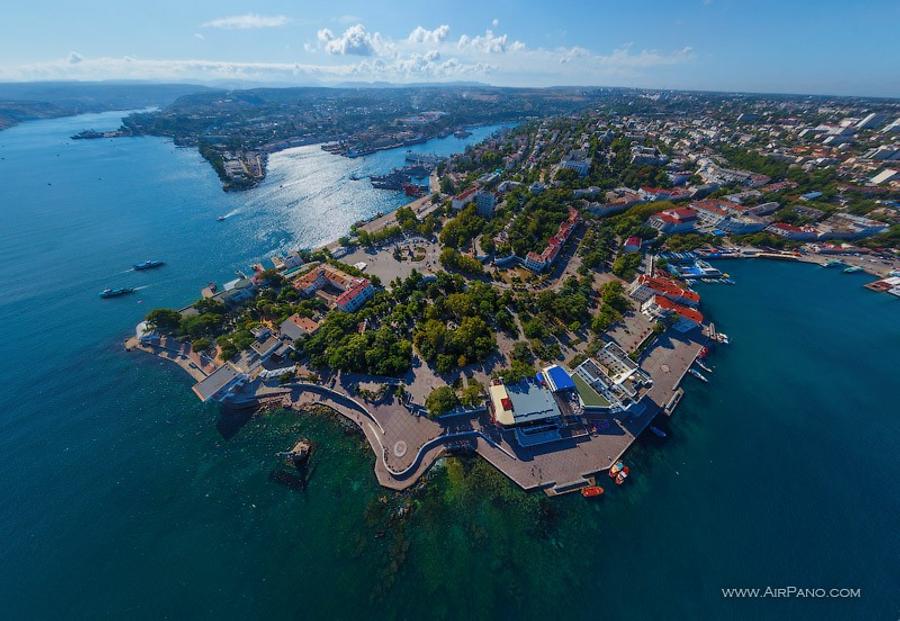 The city of Sevastopol is a stronghold of the Russian Fleet and a place of glory of the Russian Navy. Our virtual tour would be incomplete without photographs of the Sevastopol Bay and the navy ships. We took an observation tour of the bay first thing in the morning. In the beginning it was not clear if we would be able to shoot: the bay was crowded with Russian Navy and civilian ships that blocked the view of the Ukrainian Fleet. Nevertheless, our aerial photo session went just fine!

Perhaps, nobody noticed our flights? Of course they did! Two people dressed in militia uniform waited for our tourist boat on the pier. They politely asked, who we were and what we were doing. I always keep an iPad with examples of our work in my backpack just in case. That was exactly the case, and so it helped us again. The officers checked our IDs, looked at the panoramas, and wished us good luck in our work. I wish we'd always have such a response! 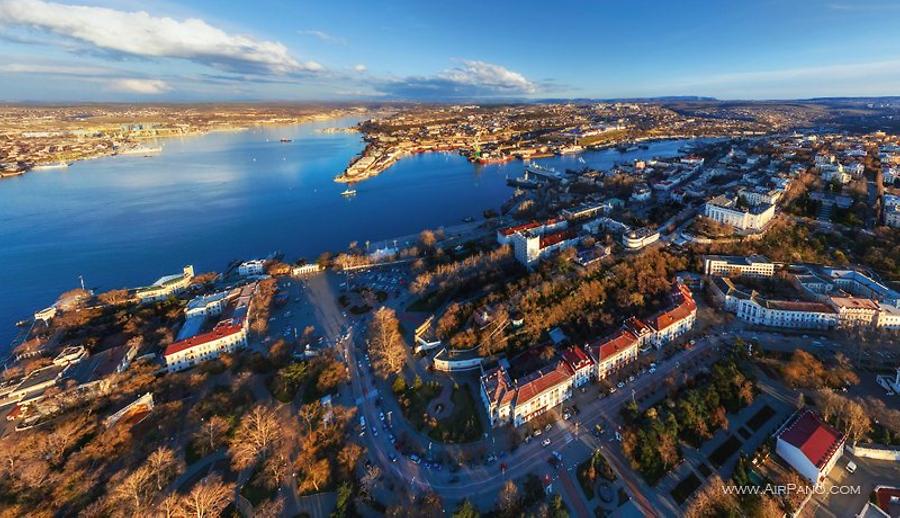 Inspired by the success of our morning boat tour, we continued shooting in the city. Like Simferopol, the city of Sevastopol carried on with its everyday peaceful life: public transportation was on schedule, cafes and shops were open. We saw armed men wearing a uniform (with no insignia) only once near the gate of one of the Ukrainian military bases.

Something interesting happened to us during an evening photo shoot. We flew near the Vladimir's Cathedral. The cathedral is listed as the UNESCO World Heritage Site. There is also an excavation site of the ancient Greek port city of Chersoneses near the cathedral. As soon as our RC helicopter landed, people's militia patrol approached us. After a long conversation they turned on a full illumination of the site especially for our team. What a great luck! We were able to shoot yet another unique image, which you will see in today's virtual tour.

The city of Sevastopol is located on Heraclea Peninsula in the southwestern part of the Crimea. In 5th century BC a prosperous Greek colony of Chersoneses was located right on this spot. 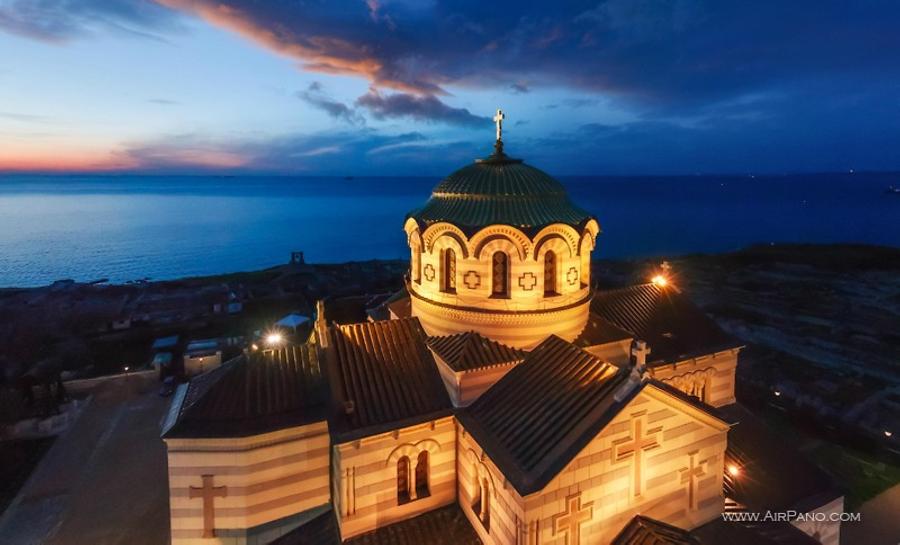 In 9th and 10th centuries Slavic people fought with mighty Byzantine Empire for the Northern Black Sea territory, for the Crimea. In the second part of the 11th century Crimea was cut off from the rest of the territory by numerous hordes of nomads. In 13th century Mongol hordes invaded Crimea; and after the collapse of the Golden Horde in 1443 it became the Crimean Khanate.

As the time passed Chersoneses and its surrounding territories lost their importance and gradually became a part of the Ottoman Empire. In 1783 the Crimean Khanate was dissolved, and the entire Crimea was annexed by the Russian Empire. At the same time Catherine The Great ordered to build Sevastopol in place of Chersoneses, which became the main Russian Navy Port on the Black Sea.

There are many unforgettable milestones in the history of the city. One of the most important historical events is the legendary First Siege of Sevastopol, when the Russian Army defended the Fortress of Sevastopol during the Crimean War. 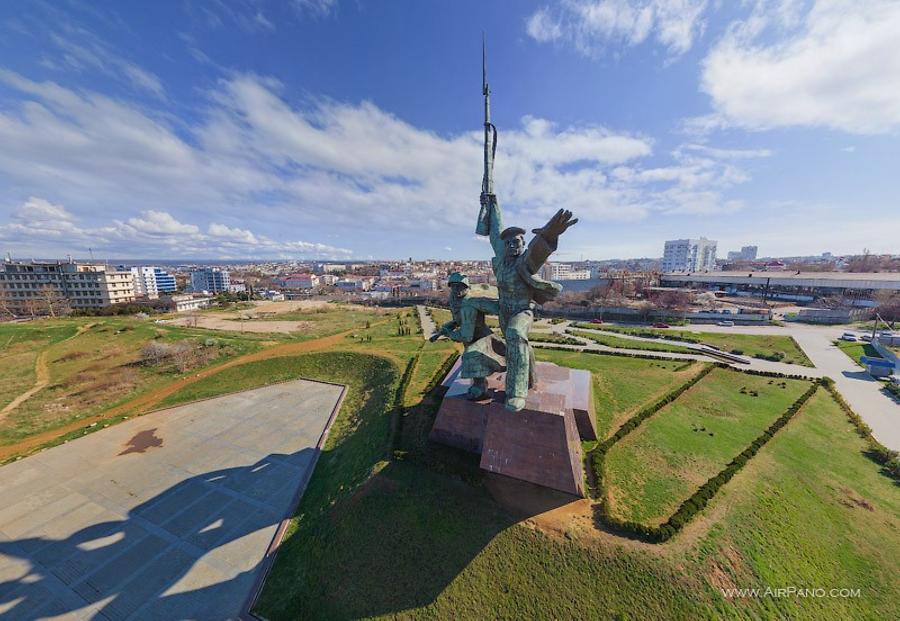 The monument to the sailor and soldier

The allied army of Ottoman Turkey, Great Britain, France, and Sardinia brought 60 thousand troops to take over the city of Sevastopol. The siege lasted 349 days, from September 13th, 1854 until August 27th, 1855. According to the engineers' calculations, during this period of time the enemy has bombarded the city of Sevastopol with 1,356,000 artillery shells. Cleaning the bay of the sunken ships and debris took more than 10 years.

According to the Peace Treaty signed in Paris after the siege, Russia was prohibited to have a Navy Fleet on the Black Sea and was not supposed to build fortresses and navy bases here. These conditions led to the 20-years period of decline of the city of Sevastopol. However in 1870 Russia unilaterally refused to comply with the humiliating articles of the Parisian Treaty and successfully rebuilt the Black Sea Fleet, bringing life back to the city.

The World War II (the Great Patriotic War of 1941-1945) took a great toll on the city. On the 22nd of June 1941 Sevastopol was one of the USSR cities assaulted by the Nazy's aviation. The Black Sea navy, marines, and citizens of Sevastopol defended the city as one. 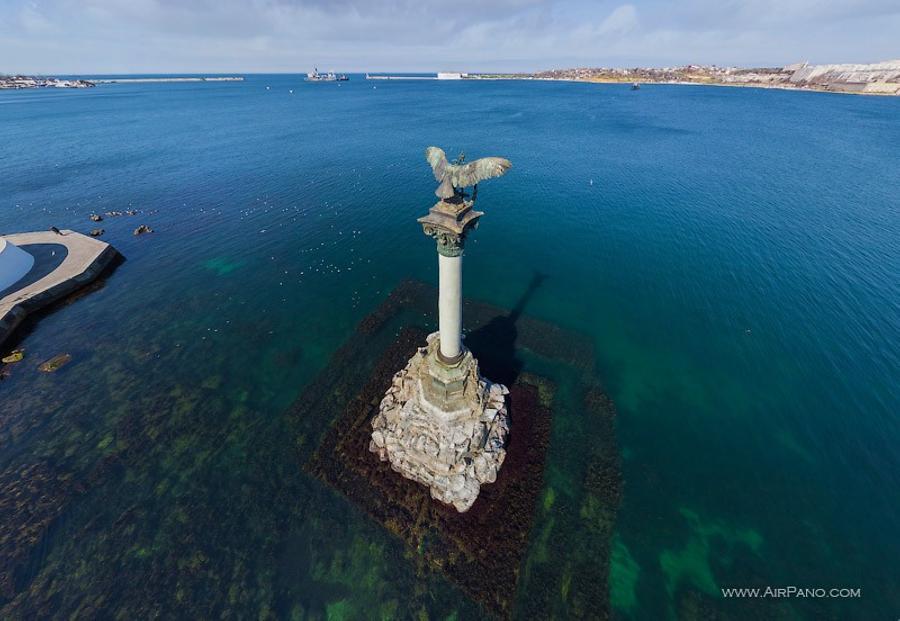 Monument to the Flooded Ships

The second heroic siege of Sevastopol began on the 30th of October 1941. It lasted 250 days before the city fell and was destroyed once again. In spring of 1944 forces of the 4th Ukrainian Front of the Red Army liberated the Crimea and the city of Sevastopol. The scale of restoration work in the Hero City was so massive that sometimes it is called "The Third Act of Bravery of Sevastopol". In relatively short period of time the city returned to its normal life becoming the largest port on the Black Sea, as well as an industrial hub and the center for science, technology, history, culture, and recreation.