Being one of the most ancient Russian cities, Rostov the Great (Rostov Veliky) is situated in Yaroslavl region, approximately 200 kilometers from Moscow, on the bank of the lake Nero. The first mention of Rostov in chronicles is dated 862, and the word ‘the Great' was added to the official name of the city only in the 12th century.

There is one more city bearing the name ‘Rostov'. It is situated in the south of the country, on the banks of the river Don. That is why sometimes there is confusion: Rostov-on-Don is much bigger. However, this one is much younger, so it is exactly the ‘northern' Rostov that is considered to be ‘the Great'. Its centuries-old history is strongly connected to the whole Russian history, and a lot of unique monuments can illustrate it. First of all it is the famous Rostov Kremlin. It is included in the list of the most precious heritage of Russian nation. So, this is what we start our story about the sights of Rostov with.

In ancient Russia the word ‘Kremlin' was used to denote the main urban defensive installation. Some of the most famous kremlins are the Moscow Kremlin, the Novgorod Kremlin, the Kazan Kremlin, and some others. In the 13th century Rostov was one of the biggest cities in the north-eastern part of the country and had its own fortified part surrounded by bank and ditch as well (its area covered more than 100 hectares). However, by the name ‘Rostov Kremlin' is meant another architectural complex: former residence of metropolitan.

In the course of centuries Rostov was the biggest religious centre and the Rostov's hierarchs were ones of the most influential church rulers. At the same time, by the 17th century the city was not on the lines of military actions, so the construction of the Kremlin was rather symbolic. Ion Sisoevich, the Rostov's and Yaroslavl's metropolitan, suggested the creation of ‘the heaven in full accordance with the Biblical description'. The construction took place from 1670 till 1683, and after that a marvelous ensemble appeared in the city - ‘Paradise garden' surrounded by overarched towers of the fortified wall. 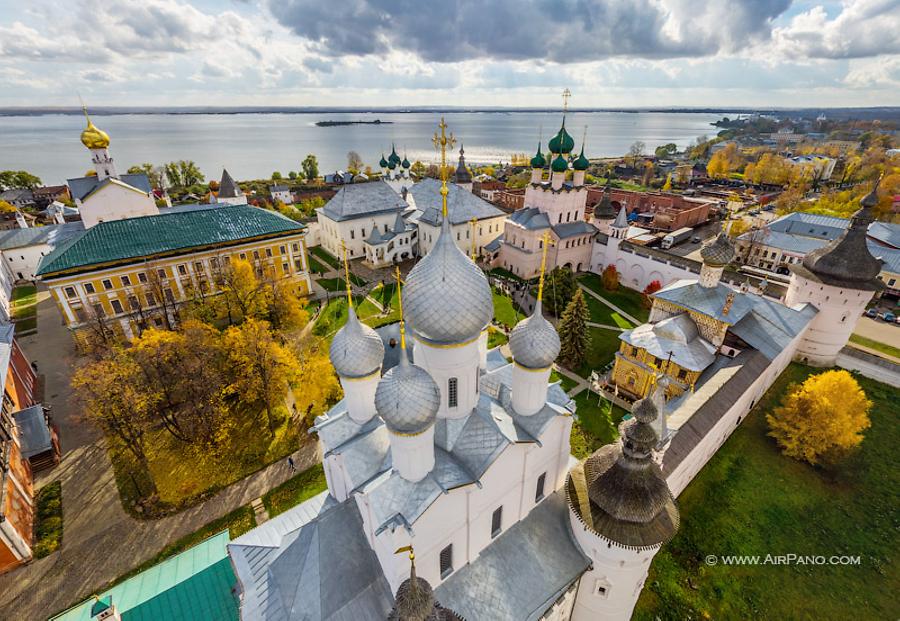 Rostov Kremlin, Church of the Saviour on Anteroom

But in 1787 archdiocese moved to Yaroslavl and the metropolitan yard in Rostov deserted. Even regular divine services did not take place there, so having faced the impossibility of maintenance such a huge construction, church administration considered the option of its total destruction. Fortunately, local merchants found the money and by the end of the 19th century the Rostov Kremlin had been restored. 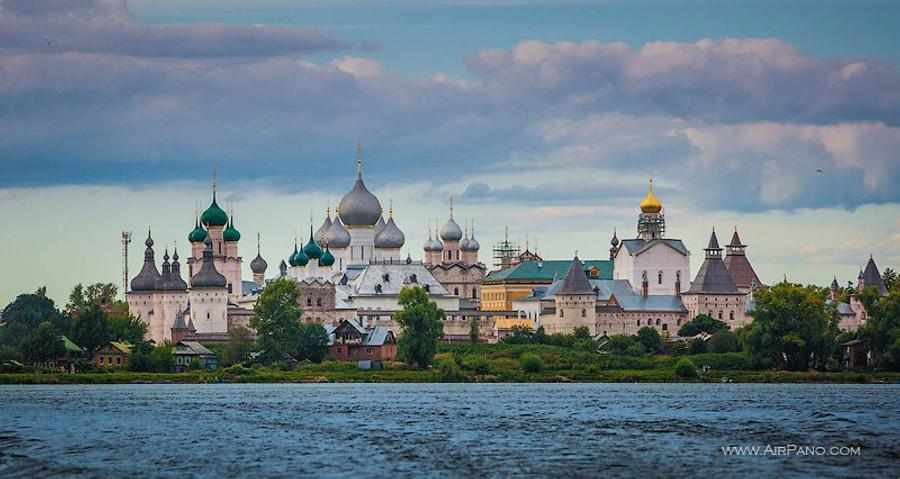 In 1953 there was a severe tornado in Rostov which damaged a lot of architectural constructions, but, fortunately, after that they were restored. Nowadays Red and White Chambers, the garden of metropolitan, Judgment department, churches of St. John the Apostle, Hodegetria and Image of Edessa with some other historical and religious monuments are situated within the walls of Kremlin with its eleven towers. 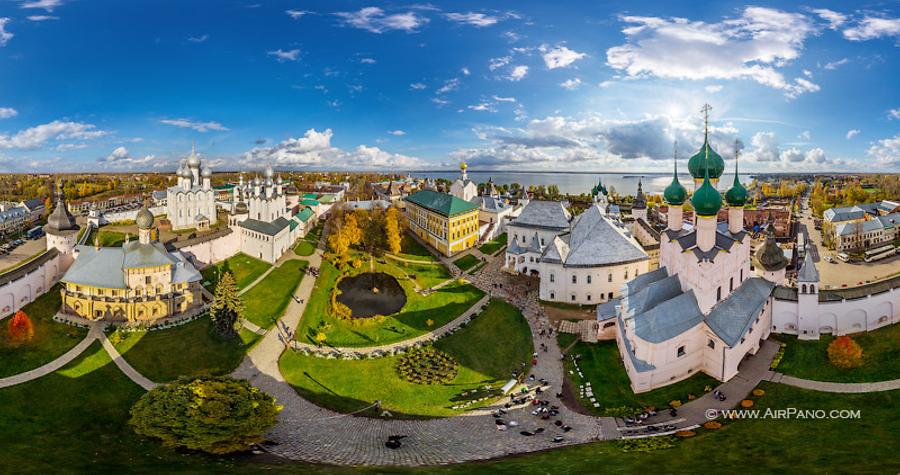 The heart of the Rostov Kremlin is the Assumption Cathedral (construction dated 1508-1512). Actually, the metropolitical residence was built on the place of its ‘predecessors', former temples. This sixty meter tall cathedral looks very much alike to the one that is situated within Moscow Kremlin and bears the same name. This monumental five-doomed construction is fulfilled with brick and white stone, different decorative elements add some expressiveness to this temple. 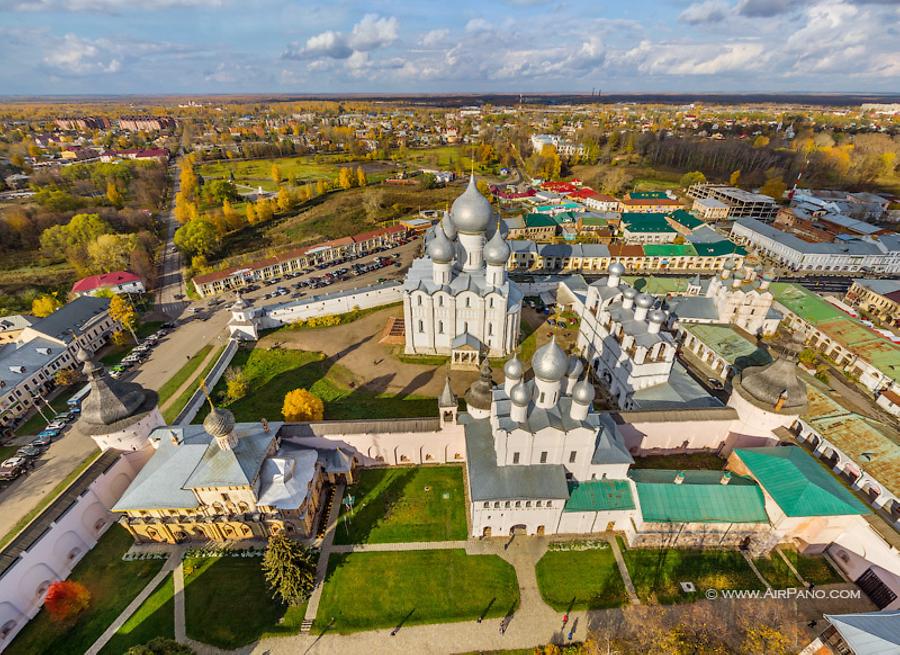 During 1682-1687 a four-doomed belfry was built to the south-east of the Assumption Cathedral. Each of its 13 bells, from the biggest one that weighs 2 thousand poods (32 tons) to the smallest one, has its own special sounding, so the unique chime of Rostov is the property of the whole world's culture.

These days on the territory of Rostov Kremlin there are both functional temples of Russian Orthodox Church and the state museum-estate, a huge scientific centre of archeology, art and history.

There always were many churches and monasteries in Rostov, but the most ancient of them didn't remain till today: in the beginning of the 17th century, in the time of Polish-Lithuanian intervention, the city was significantly ruined. But later intense construction activity began there, so now Rostov has 326 cultural monuments and more than 100 of them are of federal significance. 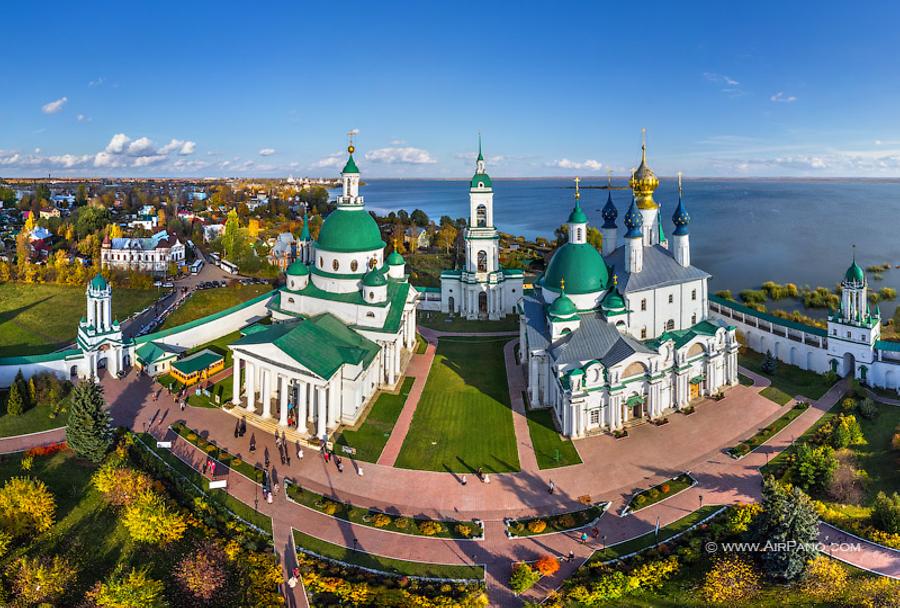 In addition to the great number of temple complex, there is also great stone and wooden building system dated the 18-19 centuries which is a pride of Rostov. The genuine landmark of this place is a lake landscape. There is also a Livery Yard dated the 17th century, it is the only livery yard in Russia that remained till today, though not completely. Diggings on its territory are still ongoing, and sometimes valuable items can be found.

One more famous church complex of Rostov is Borisoglebsky male orthodox monastery, situated on the way towards Uglich. It was founded in 1363; afterwards it was rebuilt and enlarged. But starting from the 17th century its architectural ensemble was scarcely changed. For many years this residence was a significant religious centre. In 1612 knyaz Dmitry Pozharsky and Kuzma Minin, posadnik (mayor) from Nizhny Novgorod, were given blessing for protection of Moscow from Poles just exactly in this place. Now this outstanding architectural monument is under state protection.

So, our panoramas will help you to experience Rostov the Great - the magnificent city included into the famous tourist route "The Golden Ring of Russia".