Petropavlovsk-Kamchatsky is one of the oldest cities situated in the Far East of Russia. Its history began in 1697 when Cossacks founded a fort on the coast of Avacha Bay for warehousing animal furs — a "natural" tax paid by the peoples in Siberia and Northern regions of Russia. Half a century later on October 17, 1740 the Second Kamchatka Expedition headed by famous sailors Vitus Bering and Alexey Chirikov arrived here. This date is considered as the birthday of the city and it got its name the same day after the two ships on which the expedition had arrived: St. Peter and St. Paul. 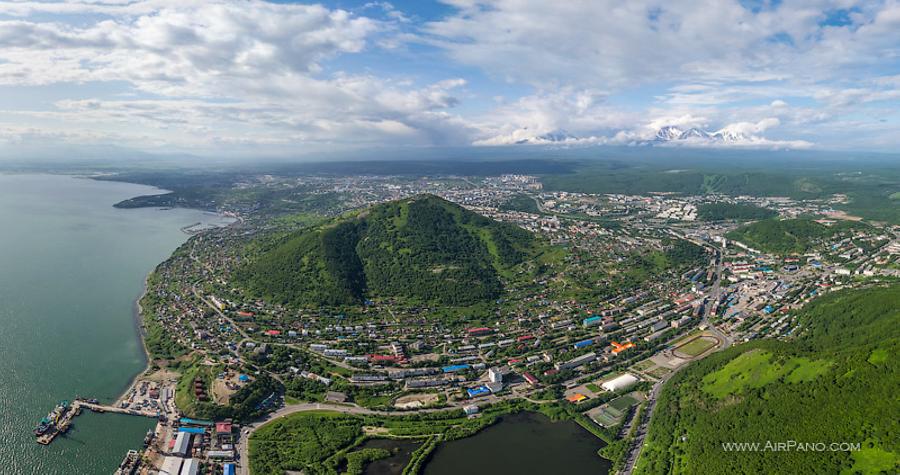 In 1854, during the 1853-1856 Crimean War the city was held under siege by the Anglo-French fleet ten days, but managed to resist and prevent the intervention. The historians consider this as one of the most important battles in the second half of the 19th century.

And then the city's destiny was to... disappear for a period of time. Even though the enemy was driven away, another problem arose: it turned out that it was quite difficult to maintain and secure such a remote area. The weather in this region was a problem as well: Petropavlovsk lies practically on the same latitude as Manchester and Dublin, but the climate here is much more severe than on the same latitude somewhere in Northern Europe or in the European part of Russia.

Having considered all the factors, military commanders decided to evacuate the whole port and the Kamchatka garrison. In a very limited time all the constructions were dismantled and the most valuable ones were hidden. Local inhabitants were ordered to go somewhere north. The Russian squadron managed to leave the port before the second arrival of the enemy. And when in May 1855 the British-French Alliance entered Avacha Bay in order to gain revenge, all they could find were the silence and the abandoned coast.

After the end of the Crimean War the reconstruction of Petropavlovsk was initiated. But still the city was developing in a rather slow pace. For many years it looked more like a village with two or three dozens of buildings scattered around the coast. Generally its sole existence was provided due to the need of the state's of a port for temporary harbouring of military, trade and scientific ships. As a result, less than a century ago (in 1923) Petropavlovsk was a rather small town with three streets and the population of about 1,500 people. The new chapter in the history of the city, now called Petropavlovsk-Kamchatsky, began in 1928 together with the development of fishing and industrial enterprises.

Evidently, having such a history, Petropavlovsk could not create some great architectural masterpieces. But, at the same time, a total absence of any heritage is not its feature. There are 28 historical memorials and monuments in the city. Among them you can find the first monuments to appear in the Far East of Russia: the memorials dedicated to Vitus Bering and Jean Lapérouse and the monument called "In honour of the Defenders of Petropavlovsk". The wooden buildings built in the beginning of the 20th century, that can still be found on the streets of Petropavlovsk, are declared as the monuments of regional importance.

However, the most remarkable sights of Petropavlovsk-Kamchatsky are its picturesque landscapes. The city lies quite close to Avacha Bay, thus the citizens can witness the sea and numerous ships from practically any place in Petropavlovsk. The main street of the city lies at the feet of Petrovskaya and Mishennaya sidehills, and on the Ozernovskaya sandspit there is a public beach. Three volcanoes that surround the city — Koryaksky, Avachinsky and Kozelsky — became such an essential part of its landscape, that the locals call them ‘homely'. So, now it is your turn to have a better look of this interesting city using our panoramas.

We are very grateful to Sergey Krasnoshchekov and Yury Pchelincev for helping us organize photo shoot.