Photo by Stanislav Sedov and Dmitry Moiseenko, members of the AirPano Team that is a member of the global-geography Consortium.

Nowadays Peterhof is a world-famous complex consisting of various palaces and gardens, and it's considered to be one of the most important sights in St. Petersburg and Russia. Before the 18th century its territory was occupied by only a few Finnish villages. It wasn't until year 1705 that the word "Peterhof" appeared in the first travel journal of Peter the Great (Peterhof is Dutch for "Peter's yard"). The tsar saw this area as a good place to construct a landing for travelling to and from Kotlin island.

By 1714 Peter the Great had the idea to build a luxurious country residence, as luxurious as French Versailles. The complex of magnificent buildings was meant to glorify the power of Russia, and its recent victory over Sweden for an outlet to the Baltic Sea. 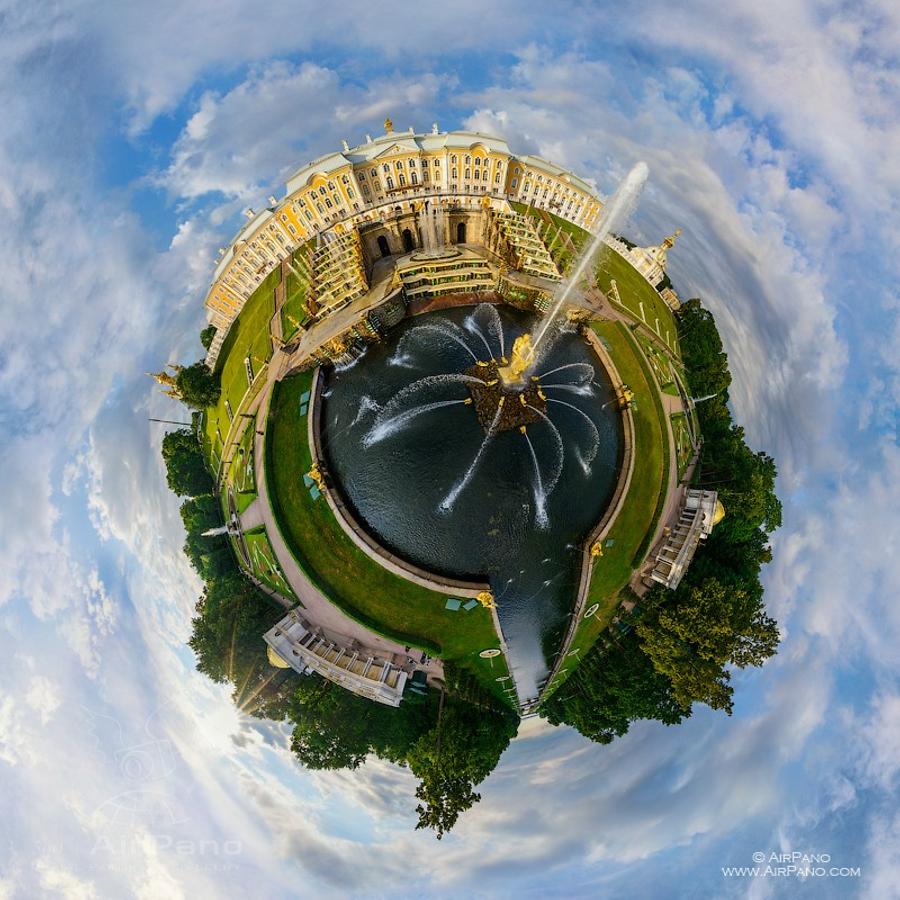 To turn this idea into reality the construction was started in the nearby village of Strelna, but later it turned out that the terrain in Peterhof would allow to build higher fountains due to its numerous underground springs, so construction was moved there. The best architects of Europe were invited to participate in the construction process. However, old drawings made by the tsar, his decrees, and notes on the documents suggest that the general concept design of entire complex, and, sometimes, design of individual architectural elements and fountains belonged to Peter the Great himself. The grand opening of the residence took place in 1723: by that time they planned out the Lower Gardens, dug the Sea Channel and launched some fountains; they also placed statues, vases, and busts on cascades, terraces, and alleys. Even then the beauty of "Peter's yard" astonished visitors, but a new round of construction started by the Empress Anna Ivanovna, successor of Peter the Great, that made Peterhof one of the largest palace-park ensembles in the world. 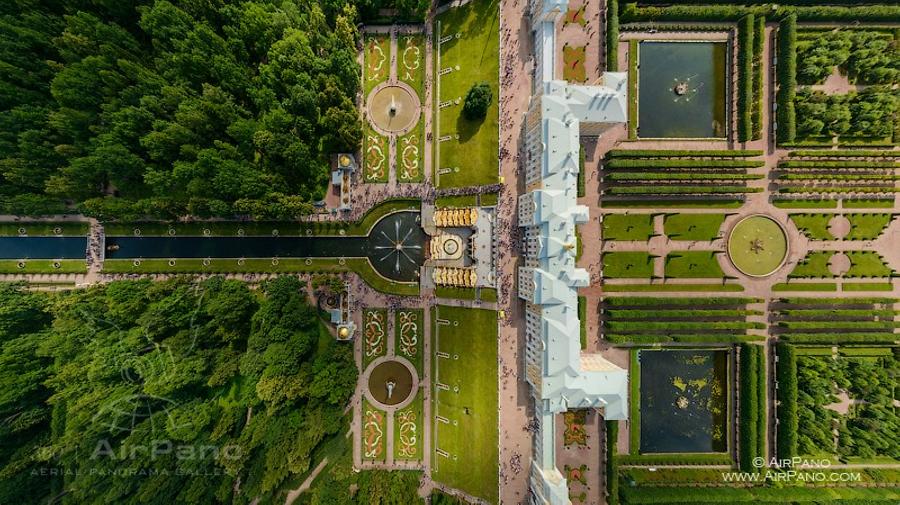 Above the Grand Cascade

Modern Peterhof includes several palaces and park complexes that were under construction for almost two centuries. The Lower Gardens, Upper Gardens, and English Park were built in the 18th century; the Alexandria Park, Kolonistsky Park, Meadow Park, Alexander Park, Sergievka Park, and Lower Dacha were built in the 19th century. Peterhof is often compared to Versailles (the tsar's project was realized as intended), but many critics believe that it's a wrong comparison. European palaces and parks are more continental, whereas Peterhof was born from the romance of sea and it perfectly blends into surrounding picturesque waters.

One of the most famous landmarks of Peterhof is Samson Fountain, the central fountain with 21 meter high water jets. According to the original plan, there was supposed to be a statue of Hercules defeating the Hydra of Lerna in the center of the Grand Cascade fountains, but it was replaced by a statue of Samson tearing the lion's mouth. 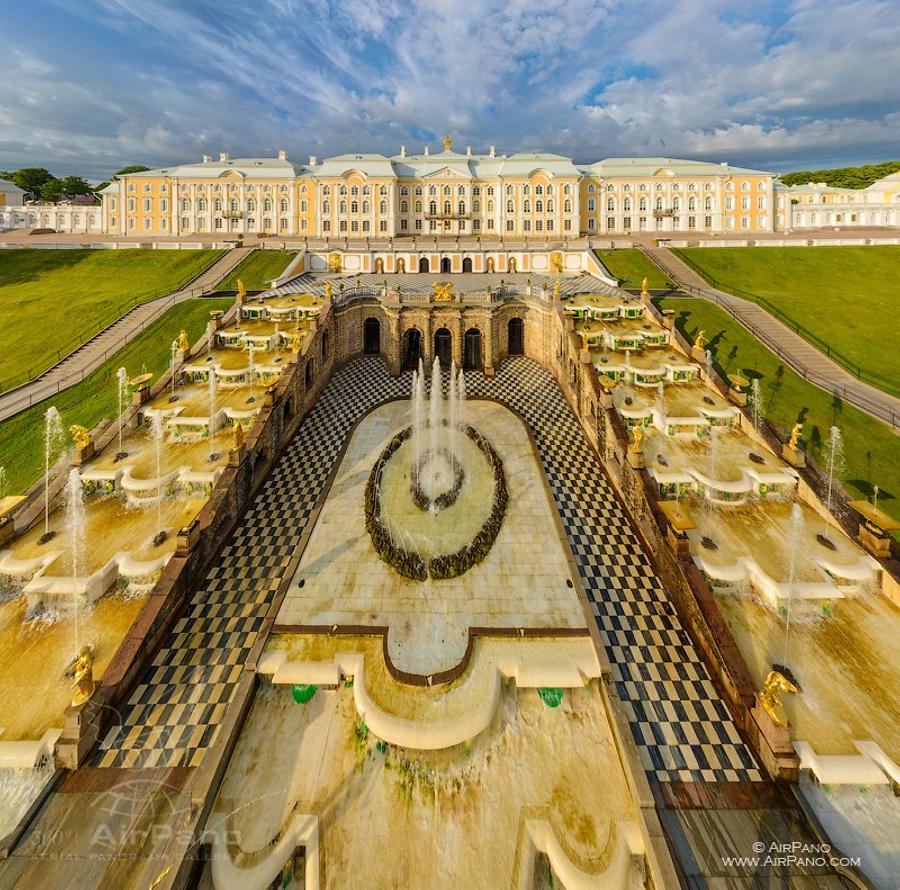 The Grand Peterhof Palace and the Grand Cascade

A fountain monument was erected in 1735 to commemorate the 25th anniversary of the historic victory of the Russian army over the Swedes at the Battle of Poltava on June 27th, 1709 (the day of St. Sampson the Hospitable). It explains why Hercules was replaced by Samson: the lion is associated with Sweden, because it's depicted on the arms of Sweden.

The fountain was badly damaged during the World War II, and the original statue was lost. The Samson that we can see now in Peterhof is a copy that was carefully re-designed using archival drawings and photographs. 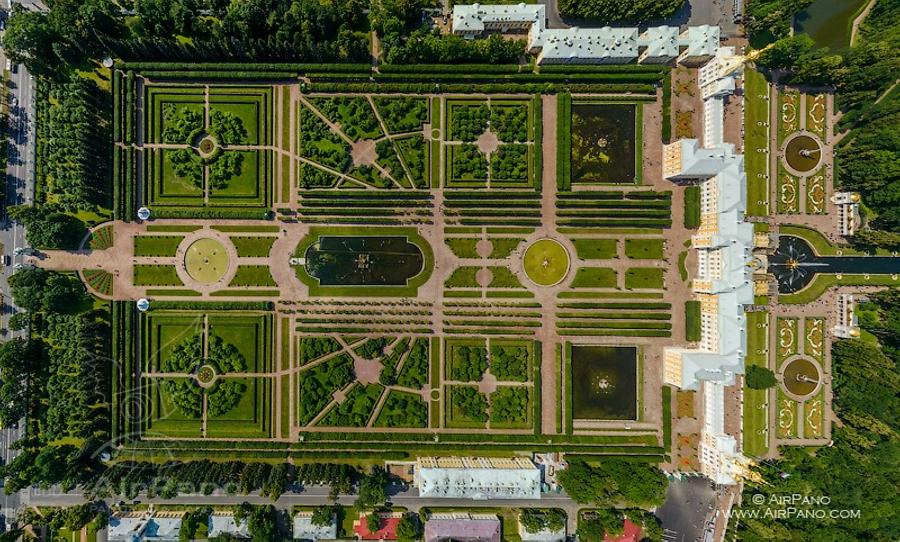 There were other Peterhof sights that were damaged during the war: the Upper Gardens, the Lower Gardens and fountain water pipeline system. The restoration work started in 1944 continues to this day. But it's hard to notice: the complex of palaces and gardens has been restored almost completely, which you can see for yourself through our panoramas.