Church of the Intercession of the Holy Virgin#

by Stanislav Sedov and Dmitriy Moiseenko, members of the AirPano Team that is a member of the global-geography Consortium.

The idea to photograph The Church of the Intercession on the Nerl River, the famous monument of medieval Russia, was rather spontaneous. I heard in the news that the territory near Ryazan city was under the state of emergency: nearly 500 houses were flooded by the high water.

I already shot the Church of the Intercession from the air in 2010. I made a few calls asking my friends about how the flood affected Vladimir city. I received several promising images very quickly — the valley, which we crossed by foot last time was flooded up to the railroad tracks. Obviously, we had to move quickly. We had to go right away, before the water goes away. Having no boat in our fleet was a serious problem. My friends told me that it was practically impossible to hire a boat on location. I described all these challenges to my partner, Dima Moisseyenko, and asked him if he was ready to put aside his business (ladies and Facebook) and come with me to Vladimir city. Like a good boy scout, Dima was always prepared. The second "boy scout", prepared to take on challenges for the beautiful photo, was Denis Sinyakov, staff photographer of the Reuters agency. 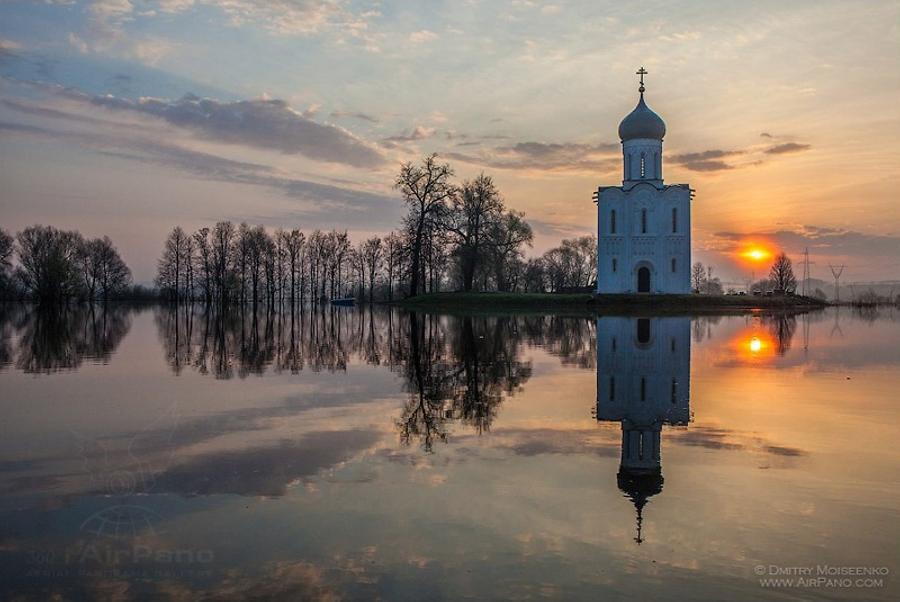 It was decided to leave immediately to arrive by sunrise. We had to find a floatation device right away, so Dima ordered a boat online. They delivered his order an hour before our departure, which was about midnight. In 3,5 hours of driving a bad road and fighting drowsiness we found ourselves near Bogolyubovo railway station. It was dark and quiet at 4 o'clock in the morning. After several attempts to read the manual for our boat in the deem light of the streetlight, and the group brain storming, we finally assembled the boat. Than we hauled it over the railway tracks and put it in the water. While in a hurry, we completely forgot to break a bottle of Champaign during this Gala launch. Well, we didn't have it with us anyway.

As promised, there was a lot of water. The fog descended on the river and made it look like we were on an ocean shore: there was nothing but the water up to the horizon. The opposite shore was completely invisible. The moment we set to launch, a group of photographers appeared on the shore. They carried a lot of photo gear, even tripods, but they didn't have the main piece of equipment required to photograph the flood — a boat. They looked at our boat, sighed, and went on along the rail tracks, disappearing in the fog...Wasting no more time, we sailed away. 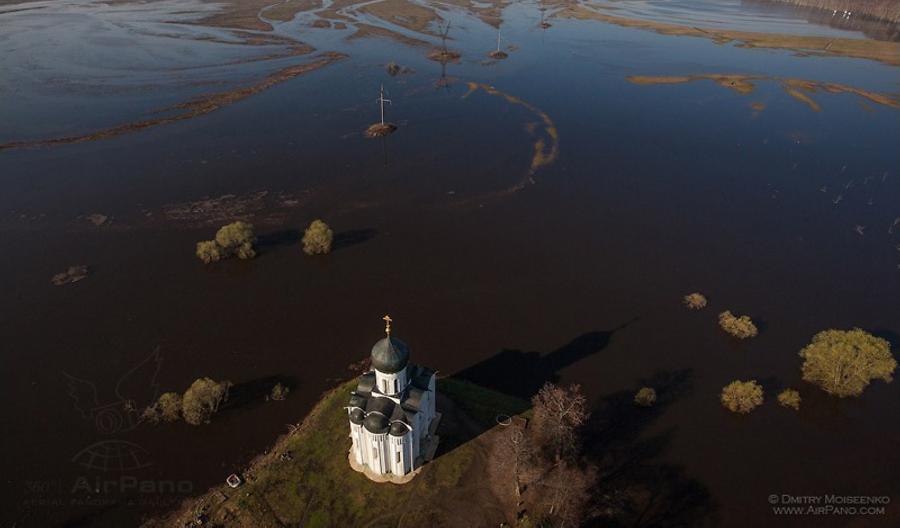 I will skip the details of our glorious voyage through the flooded forest first, then through the valleys and fields. I just want to mention that among three of us only Denis had waders, and that in ten minutes after volunteering to raw the boat, Dima confessed that he's never done it before.

After wondering through river channels for about an hour we saw a blurry silhouette of the Church. Right before the sunrise. The sun painted the sky and the water with such surreal colors that we almost forgot why we were there.

The guys grabbed their cameras and I took the paddles. Only the sound of their shutter clicks disturbed the silence for the following half an hour. Our photographers got so carried away, that only my threats to "misuse the paddles" made Dima focus on shooting aerial spherical panoramas, which you can see now in today's tour... 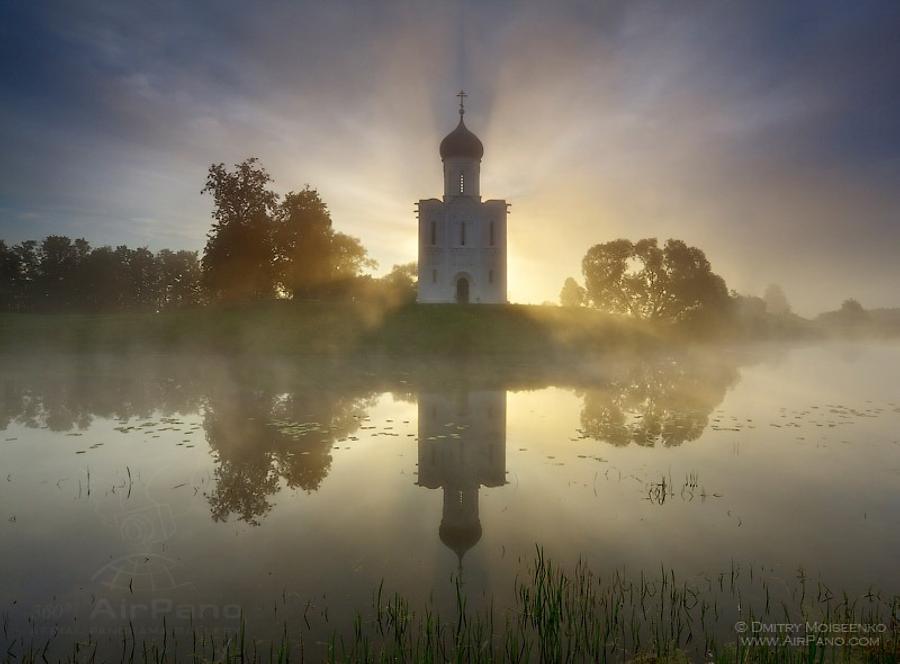 The Church of the Intercession of the Holly Virgin on the Nerl River (1165 AC) near Bogolyubovo village is a greatest monument of Russian architecture. Being an important component of the White Monuments of Vladimir and Suzdal, the Church belongs to the World Heritage of UNESCO. This remarkable Russian heritage attraction was built on the man-made hill, at the confluence of Nerl and Klyazma Rivers. The 5-meter deep foundation of the Church was especially designed to protect it from flood. The amazing fact: it took only one year to build this Church. The Life of Andrey Bogolyubsky says «This church is to by erected within one year and create home for monastics". This chronicle shows that the Church is related to the victorious campaign of Vladimir's army to Bulgarians, and to the death of Knyaz Andrey's son Izyaslav.

It is a miracle that the Church of the Intercession has survived to our days. At the end of 18th century the abbot of the Bogolyubsky monastery, under whose supervision the Church of the Intercession of the Holy Virgin was kept, decided to disassemble the building — it didn't bring any profit — because the monastery needed bricks to build a belfry. Fortunately, the abbot didn't have enough funds to commence the demolition. Unfortunately, original interior frescos were lost during its reconstruction in 1877.