The Eurasian mainland and Sakhalin Island are separated by the Strait of Tartary, with its largest island known as Moneron. When an expedition led by La Perouse was exploring these waters in 1787, Paul Merault Monneron, a French engineer officer, discovered a new piece of land; the island was named after him. However, it was only "new" to Europeans; the indigenous people of this area, the Ainu, had known about it for a long time - they called it Todomoshiri ("island of sea lions"). When the Japanese mention the island, they say Kaibato: this name is a reference to the Ainu people. 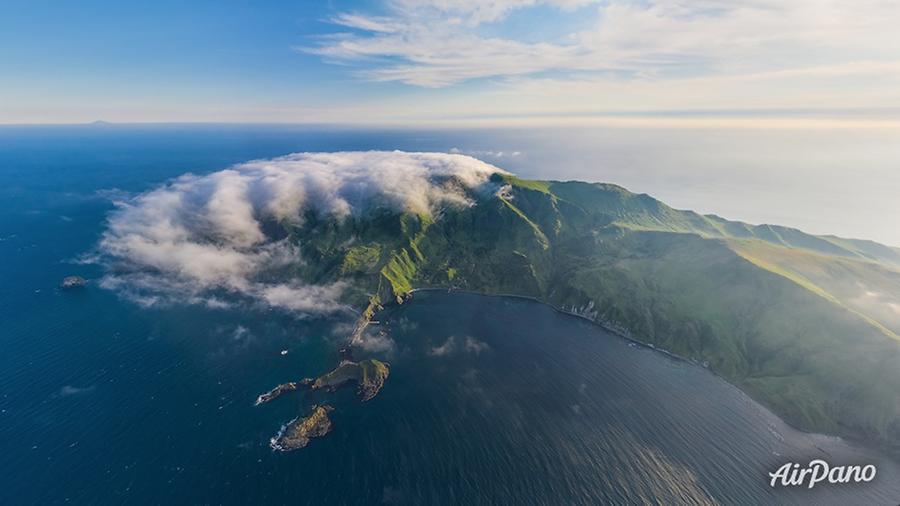 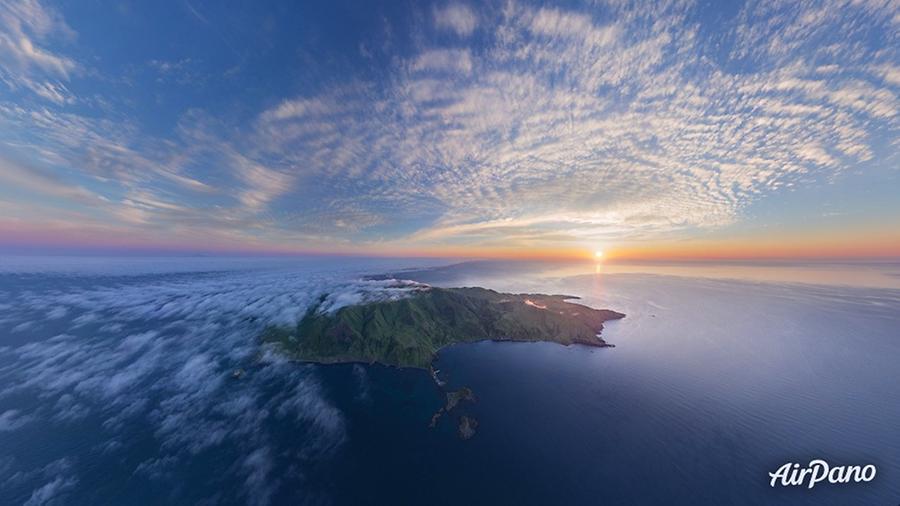 At the beginning of the 20th century, the island came under Japanese jurisdiction, and it began to be actively inhabited. The oldest surviving building was built in 1910. A weather station was built at the same time, which is still in operation today, and an underwater telegraph cable over 50 km (31 mi) long was laid from Sakhalin. In 1914, a lighthouse with powerful underground utilities was erected, which not only survived to this day, but is also actively used. The island's economy was based on logging and fishing. 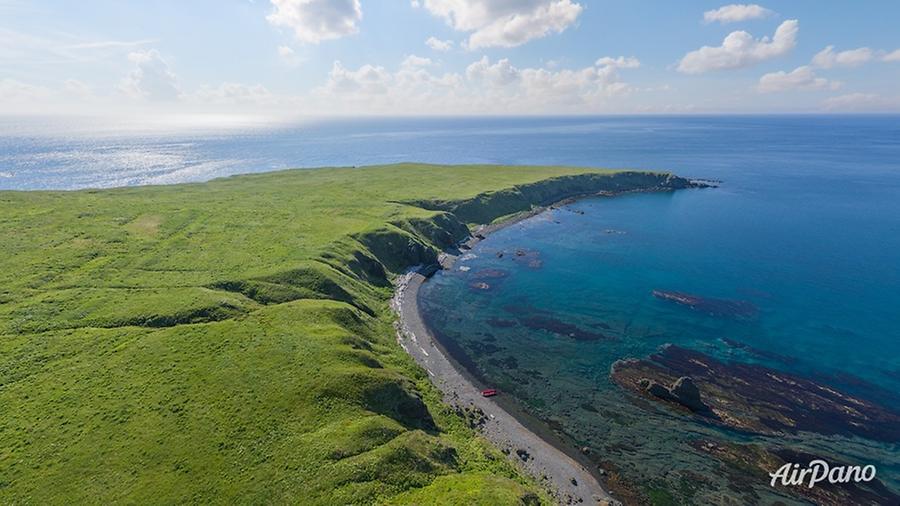 In the 1920s and 1930s, the population of Japan's Moneron reached 900 people, but together with seasonal workers employed in the maritime economy, there could simultaneously be as many as 2,000 people on the island. Near the Bay of Kologeras, there were rice paddies, the remains of rice terraces and the irrigation system have survived to this day.

After World War II, the island became part of the USSR's Sakhalin Oblast (Region). A seine fleet base was set up here, and a fish processing plant was built in the southern part of Chuprov Bay. By 1959, the settlements of Moneron, Krasny, and Bodry had about 500 permanent residents, but in the next decade the fishing industry in Sakhalin Oblast switched to the more profitable distant-water ocean fishing, and the island became less and less populated. 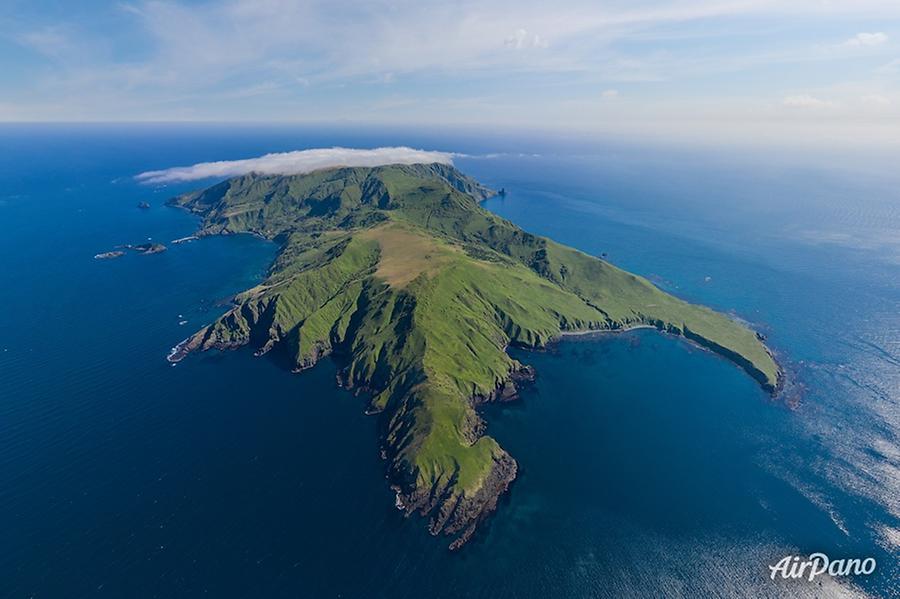 Moneron from the North
© AirPano

Having become completely uninhabited by the 1970s, Moneron received the status of a closed border area, which had a beneficial effect on the local flora and fauna. Now it is a marine nature park, which is rightfully considered one of the gems in Sakhalin Oblast. Nature here is very diverse: emerald hills and mountains (the highest point - 493 m (1,617 ft)), alpine meadows, rivers, waterfalls, columnar cliffs and grottoes with colored walls. There are ringed seals, largha seals, and Steller sea lions that frolic in the bright turquoise water here; and the southeastern coast is home to the largest seashore colony of birds. 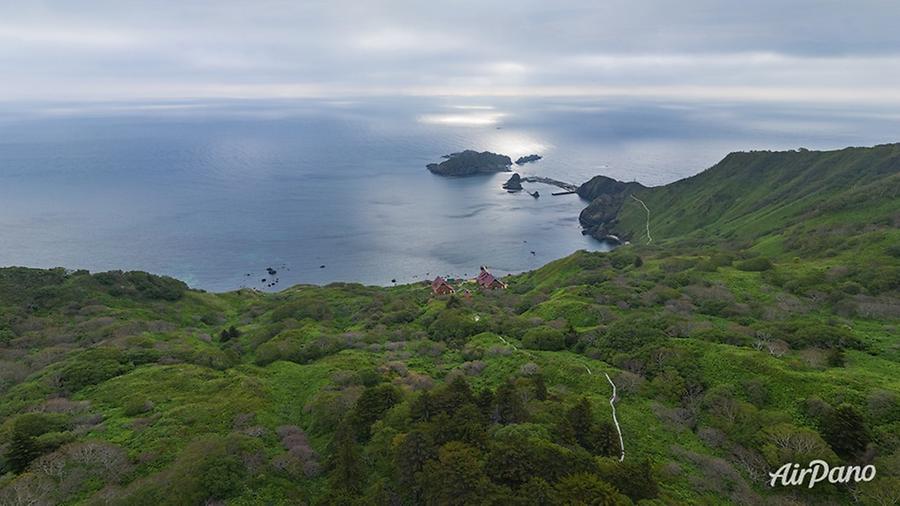 Moneron is influenced by the Tsushima Current, so the water is not only transparent, but also very warm. Besides, the water area abounds with reefs: it's a real paradise for divers! This is not just Russia's first marine park: it's the only island nature park in the country. A walk with AirPano will help you discover this beautiful spot of Russia.