Photos Stanislav Sedov and Sergey Rumyantsev, members of the AirPano Team that is a member of the global-geography Consortium.

Russia offers a variety of natural, cultural and historical sites. Some of them are well known, others remain in the background. An AirPano virtual tour will tell you about a magnificent natural landmark worthy of global recognition: the Manpupuner rock formations, the stone idols in the Troitsko-Pechorsky district of the Republic of Komi. In the local Mansi language “Man-Pupu-nyor” means a “small idol mountain”, in the Komi language they call it “bolvano-iz”, so the stone pillars are colloquially known as the “Mansi blockheads”.

Far back in the past, there was a mountain range here, but the rain, snow, wind and sudden changes in the temperature gradually eroded the soft rocks. The remains that survive today are composed of hard shale rock; the oddly-shaped pillars are a result of the centuries-long influence of the forces of nature. This process is known as “selective weathering”. Those lumps of rock that were capable of standing against wind and weather became true guards: they are protecting those rocks that lie below from destruction and erosion.

The height of the Manpupuner pillars varies between 30 and 42 meters. All in all, there are 14 pillars: six in one group, and eight in the other one. Each pillar has its unique shape, resembling a man, an animal head, a bottle, and other objects - a variety of shapes depending on the imagination of the person looking at them. Two of the eight pillars are so close to one another that they look like a single monolith. 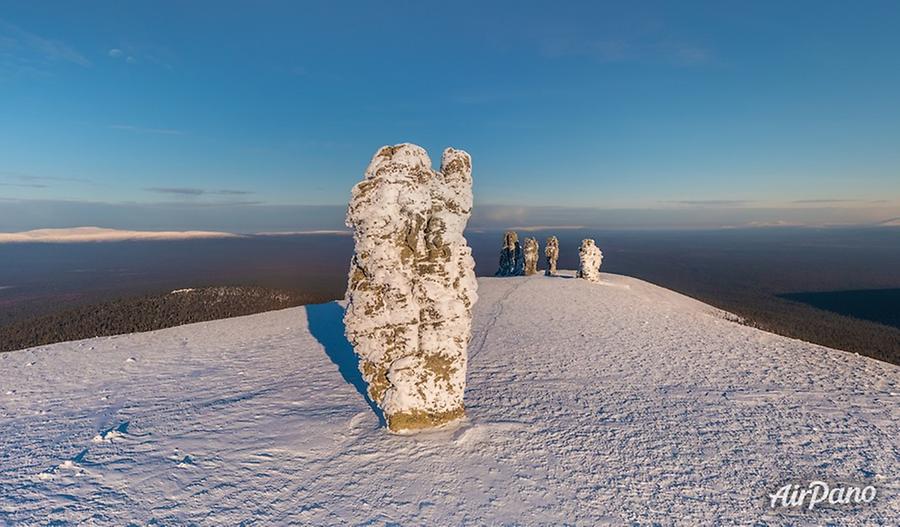 Sometimes, the stone giants make heavy sounds as if talking to one another. Given the abnormal shape of these natural wonders, it is not surprising that there is a host of legends about them. The most frequently told one is about ancient Samoyed giants who were on a march through the mountains, heading to destroy the Voguls (as the Mansi were formerly called). On the way, the shaman who led the host, saw Yalping-Ner, a sacred mountain. Sensing the powers stronger than his, he dropped his drum. The drum started rolling and turned into a conical mountain, which was later called Koyp (“a drum”), and the fighters were terrified and turned to stone. Standing apart is the Shaman rock: this is what became of the leader of the giants.

A romantic legend about the Manpupuner stone idols traces their history to a battle between the locals and the giants who wanted to steal away the beautiful Ayum. The girl turned for help to the spirits of the sacred mountain of Yalping-Ner, and they gifted her brother a magic shield. The sunlight, reflecting from it, turned the enemies into stone. According to another version of the same legend, a powerful shaman was wooing Ayum. Being rejected and feeling desperate, the shaman threw down his shield and magic started happening. The girl’s brothers and the shaman got petrified turning into the first group of the stone idols; the girl and her family form the second group of the stone pillars, and the shield, having rolled up to the mountain, gave birth to that very conical summit called Koyp. 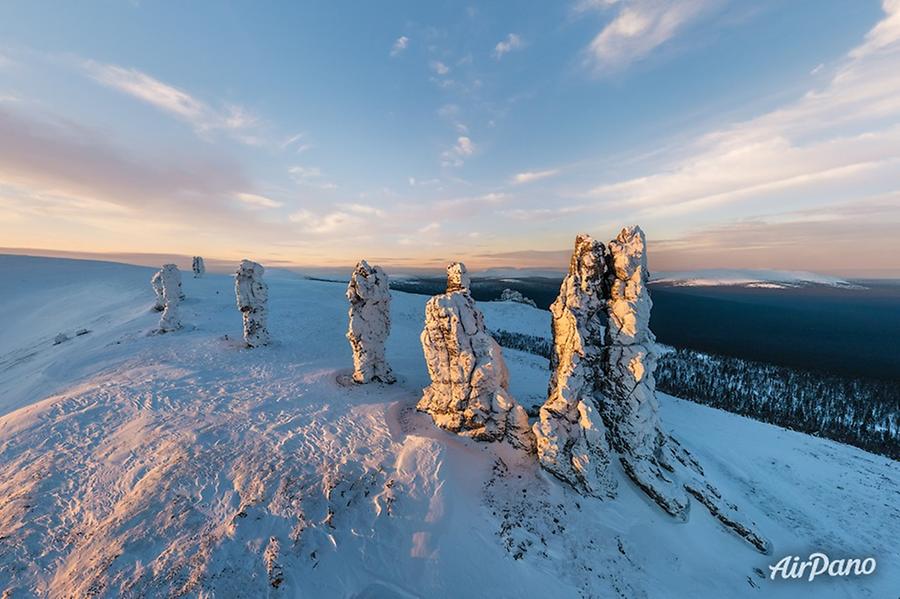 As we see, the legends get intertwined and transformed; yet, they surely only add to the mystery surrounding the Manpupuner pillars.

The group of “blockheads” is in a hard-to-reach spot, the first explorers came to the area only in the 1930s. Before that, the area was believed to be sacral and was visited by shamans only who went there for spiritual practices. Today, Manpupuner makes part of the Pechoro-Ilychsky Reserve; in 2008, the formations were recognized as one of the Seven Wonders of Russia. 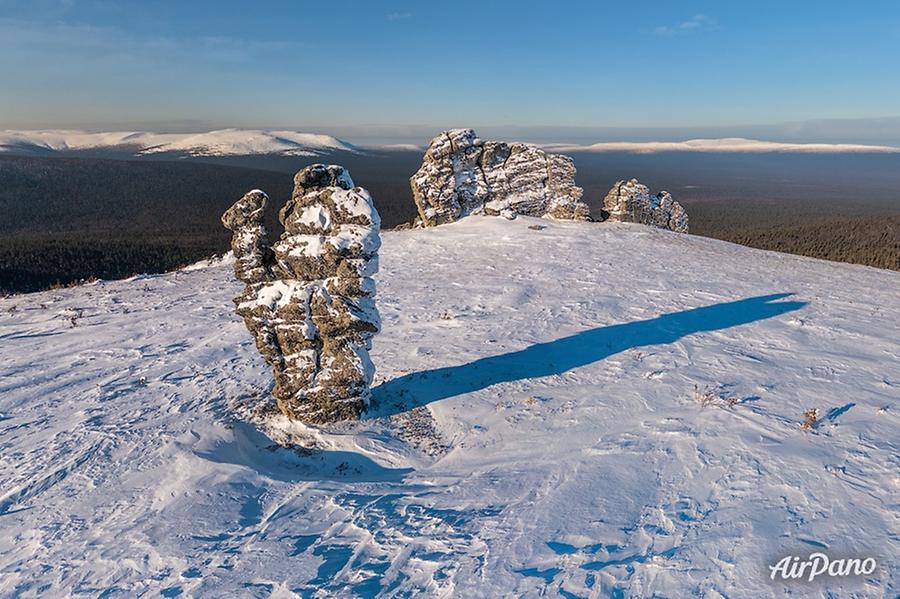 The second group of stones
© AirPano

Yet, the place has never become a mass tourism destination - it is not easy to get there. Manpupuner can be accessed either from the European part, the Komi Republic, or from Asia. The AirPano team started off in Komsomolsk on Pechora (Komi), and travelled 227 kilometres using a snowmobile. When making such a trip, it is advised to stay overnight at the Shezhim-Pechorsky cordon. You can enjoy the spectacular scenery of the place from our panoramas. If one is lucky to get a special permit in the reserve, it is possible to spend the night close to the Manpupuner stone idols. Perhaps, a mere video of this sacred place is not enough to make one experience all the emotions, but its beauty and grandeur are sure to strike a chord with everyone. 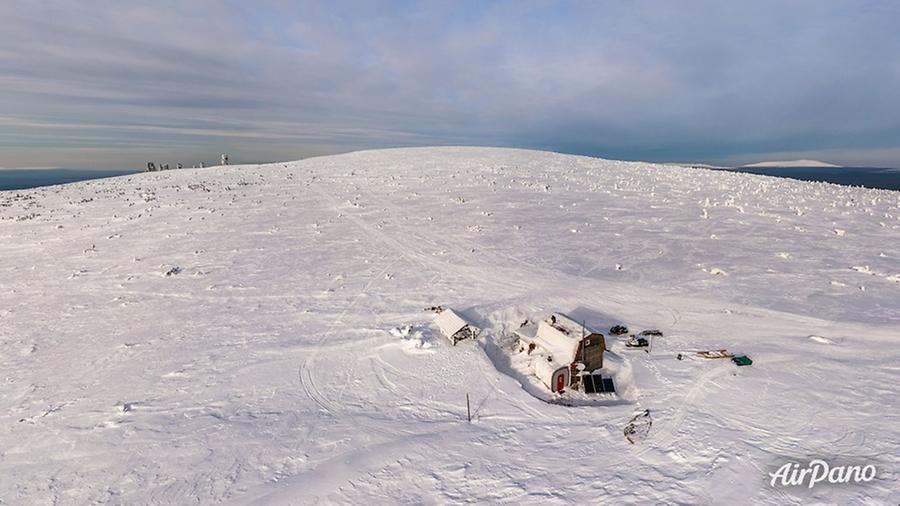 We express our gratitude to the staff of the Pechora-Ilych Nature Reserve and personally to the director Leonid Simakin for the help in organizing the filming as well as our guide Alexey Larionov for the amazing snowmobile adventure.