Altai is a truly magical place in Russia. Its nature has almost stayed untouched by the impact of the human and is absolutely amazing with its diversity and clear colours. AirPano carries on with the panoramas showing this wonderful corner of the earth, namely the Chuya and Kuray steppes. Being located between two majestic mountain ranges, they are divided by the Chuya River and its tributaries. The famous Chuya Highway (Chuysky Trakt) has a length of 968 kilometres and crosses both steppes.

These vast territories found themselves at the altitude of 1,600~1,900 meters, so these geographical features have created a dry, sharply continental climate. The average winter temperature is around -30?, but the -60? temperature records were also registered. Only around 65 days without frosts can occur here so the layer of the permafrost can reach 90 cm.

Both intermountain basins have archaeological monuments of the Stone and Iron Ages and the Turkic period in abundance: burial mounds, petroglyphs and the remnants of the ancient irrigation systems. But even having certain similarities, these two neighbouring steppes vary significantly: the Chuya steppe is covered with semi-desert vegetation, while the Kuray steppe located on the right bank of the river is closer to a desert by its nature. Some places represent an absolutely flat plain, but it gradually rises and turns into the mountains that encircle the basin.

The Kuray steppe is a home for foxes, hares and only a few species of birds, while the neighbouring Chuya steppe is the habitat for Pallas's cats, jerboas, badgers, lynxes and wolverines. Among rare species of birds, there are black vultures and saker falcons.

In the intermountain basin between the North-Chuya mountain range and the Chuya river, there is an exceptionally picturesque area named Yoshtykel with two lakes of the glacier origin. One of these lakes, the Kara-Kol, is famous for its sunsets. In addition, this area is a rare steppe place with the brown bear inhabiting it.

The Kara-Kol laying in the north-western part of the area is so much hidden from the eyes that the discoverers of the neighbouring lake, the Djangyskol (located in the north-east part), have named it "Lonely lake" (Eshtu-Kol, and Dhangys-Kol in the Altai language). The Djangyskol is shaped in the form of a rectangular trapeze with its acute angle pointing to the south. It is 700 meters long, 500 wide and up to 2,5 meters deep.

The southern side of the lake is surrounded by the highlands of the North-Chuya rang, including the famous "four-thousander" Aktru (also spelt as "Akturu" meaning the "white house" in the Altai language). The neighbouring mountains, Karatash and Kupol Trekh Ozer ("The dome of three lakes") initiate the valley covered with the Maliy Aktru glacier stretching for 3 kilometres. Its upper part lies at the altitude of 3,200 meters and is rather flat. Then the glacier curves at an acute angle and becomes flat again only in the area of the ice tongue (a narrow part located under the equilibrium line of the glacier). 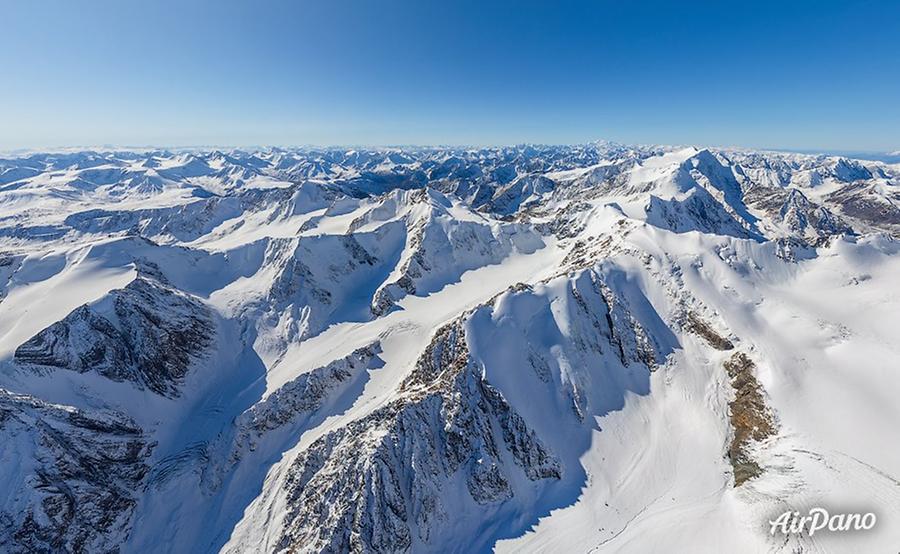 At the foot of Kupol Trekh Ozer mountain, there is the Aktru river flowing between the surrounding snowy mountains. In comparison to many other Altai places, this area is easily accessible and it makes this valley a rather popular tourist destination. Skies appreciate the opportunity to ski in both winter and summer. A meteorological station also functions here, the scientists of the Tomsk State University conduct studies, while the rescue team has arranged a base here.

Another natural landmark of the Chuya river valley is the Geyzernoye lake. It is not so big: only 30 meters in diameter and 2 meters deep. The area of the surface is 500 sq meters.

It is the only non-freezing lake in the whole Altai region: the reason for that is 6 springs functioning under the water and not allowing it to freeze. It also raises the mixture of sand and blue clay creating colourful patterns on the surface. But the water itself is very clean and turquoise-coloured.

Have a virtual trip to this remote and fascinating area!

AirPano team would like to express gratitude to the Saylyugemsky National Park and personally Valentina Semenchenko for help with organisation of shooting the Altai Mountains.