Grozny was founded as one of the fortresses of the Caucasian line of defense in 1818. When the defense line was no longer needed, many of the fortresses (including Kizlyar, Maykop, and Vladikavkaz) were granted town status. In 1870 the town of Grozny became a regional center going through a rapid growth period. In the 1890s, Grozny experienced a large migration of workers coming to the city due to the oil industry development. The first oil well was drilled in 1893, and at the same time they built a new railroad, which made Grozny the largest industrial center of the Caucasus region. In 1926-1928 a new water and sewer system was installed in the city. In 1934, the city of Grozny became a center of the Chechen-Ingush Autonomous Oblast, which was later transformed into the Chechen-Ingush Autonomous Soviet Socialist Republic (ASSR). The Chechen administrative status in the country has changed more than once during the course of its history, but the city of Grozny has always remained its capital. 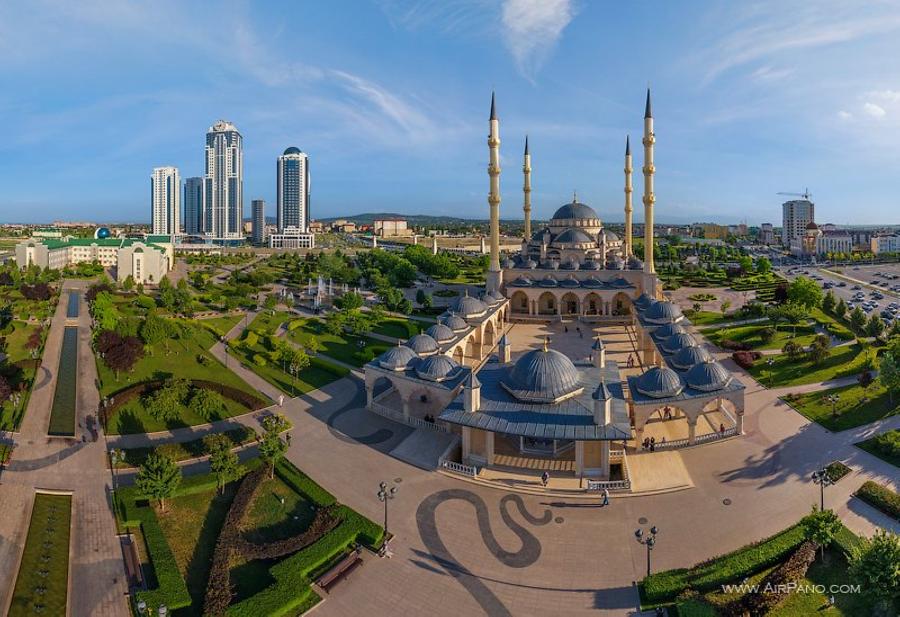 The city of Grozny suffered its last trial in current history during the First and the Second Chechen Wars (1994— 1999) when the city was taken by storm and was seriously damaged. After that, some people proposed to move the capital of the republic to the less damaged town of Gudermes. However, Akhmad Kadyrov, the president of Chechnya at that time, did not support the idea, saying that the entire history of Chechnya was closely connected to Grozny. During that time there had been a restoration and rebuilding of the city. Within a decade, the famous "Heart of Chechnya" Mosque was built, along with a large Islamic complex, a soccer stadium, the Grozny-City Towers (a five-star skyscraper hotel and business center complex).

Salat (prayer) in the mosque

The main focus of our photo expedition was the Akhmad Kadyrov Mosque, officially known as the "Heart of Chechnya". It is a mosque of amazing beauty. The exterior walls are adorned in travertine marble, and the interior walls are decorated with white marble brought from Marmara Island (Marmara Adasi in Turkish), which is located on the Sea of Marmara. The "Heart of Chechnya" is the largest mosque in Russia and is one of the largest in Europe. The diameter of its dome is 16 meters, and the height is 32 meters. Four minarets of the mosque are 62 meters tall, which makes them the tallest minarets in Russia. 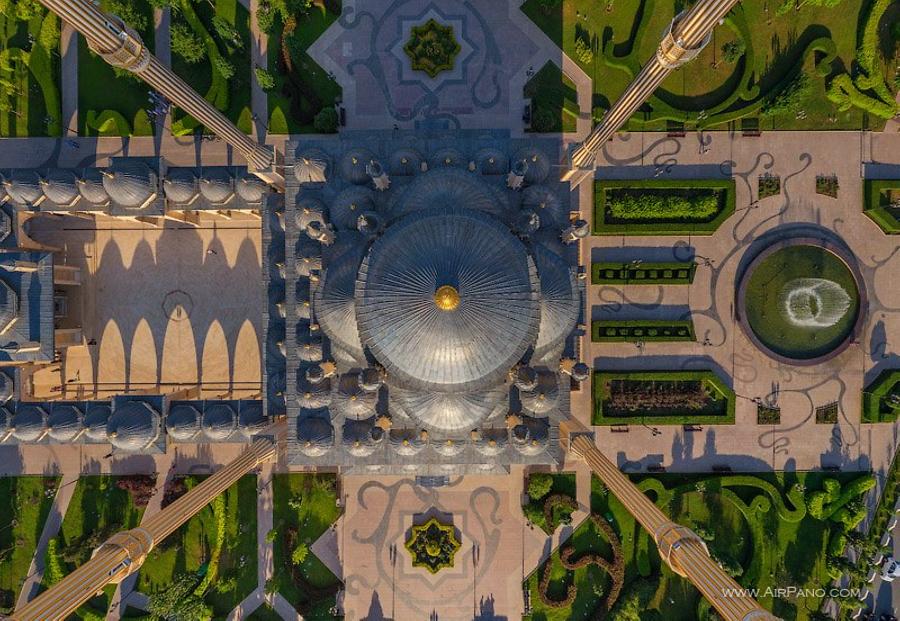 Although it is usually prohibited, they made an exception for the AirPano team and let us climb up to one of the minarets. After a dizzying ascent of steep stairs, we saw a marvelous view of the city. It is hard to imagine that a muezzin used to climb up to a minaret several times a day for the call to prayer (adhan or azan). Imagine walking a narrow stairwell up to the 20th floor of a building over and over again — one must be in good physical shape. Of course, a modern muezzin's job is much easier: there are loudspeakers installed on the minarets, and a microphone is connected to the lower level of the mosque. However, the view from a minaret is worth the climb. 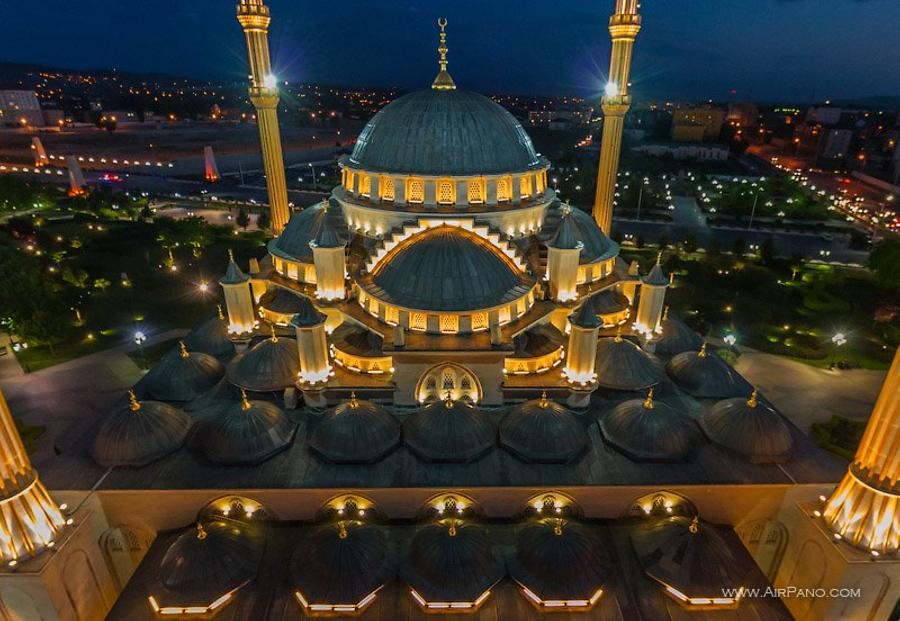 The "Heart of Chechnya" Mosque can accommodate 10,000 people, and the same number of people can pray on the square in front of the Mosque as well as in the summer gallery. The walls and the dome are skillfully painted by master artisans from Turkey. The inner surface of the main dome is decorated by the words from Surat al-Ikhlas ("The Purity of Faith", the 112th Sura of the Qur'an): "He is Allah, who is one, the eternal God. He neither begets nor is born, nor is there to Him any equivalent".

Interestingly, there are 36 chandeliers in the "Heart of Chechnya" Mosque that are modeled after other famous mosques: al-Kubbat Sahra in Jerusalem, Rovzat-Nebevi in Medina, and the Kaaba shrine in Mecca. The mosque itself and all its elements are impressively large: a chandelier alone is 8 meters high. However, it is not the grand size that will impress you the most, but the airy lightness of the structure. The dome seems to float atop 4 supporting columns.

Interior of the Akhmad Kadyrov Mosque

We visited the city of Grozny during the month of Ramadan, when Muslims are fasting. With the support of Russia and the Chechen Muftiate, we were able to take unique pictures during Namaz (or Salat), a Muslim prayer. We were deeply impressed by the Tarawih, a nightly prayer performed by Muslims during the Islamic month of Ramadan: hundreds of men, shoulder to shoulder, were praying together. A break is taken after every 4 rak'ah (a set of the prescribed movements and words), during which the men can sit down. Thus the name "Tarawih," which means "rest."

We noticed a considerable number of police patrols on the streets of Grozny. There is almost no crime, however, and you won't see drunken people there either. Our guides said laughingly, "If you see a drunkard, make sure to take a picture! We are going to show it to everyone!" 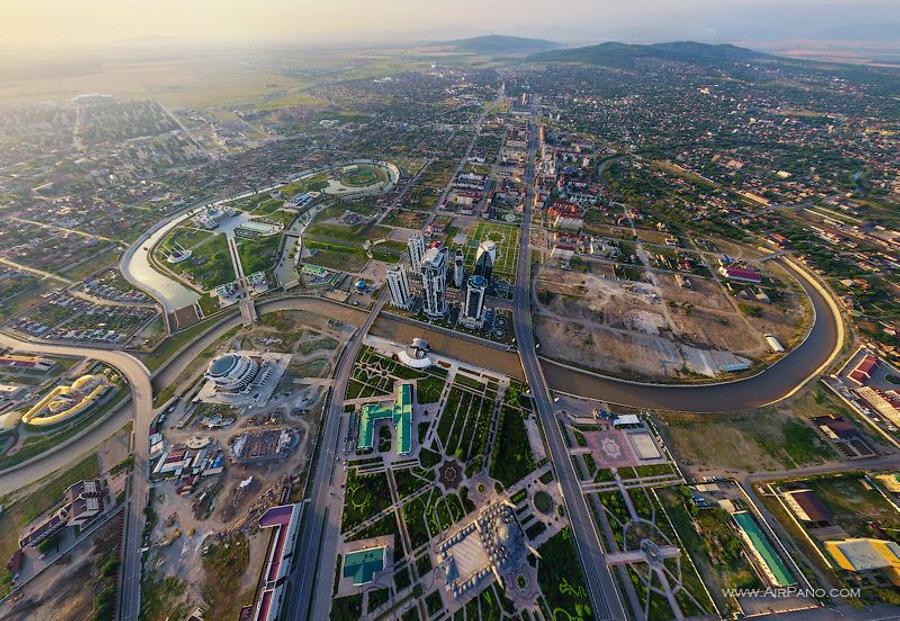 The beauty of local women is legendary; and there is a good reason for that. One doesn't need to be a poet or an artist to appreciate their grace. Despite common opinion, a long dress and a shawl only enhances a female's natural beauty and elegance. We saw girls wearing short skirts on the streets of Grozny as well, and there were no complaints from the public. So, local customs are not as strict as people outside of Chechnya commonly think. 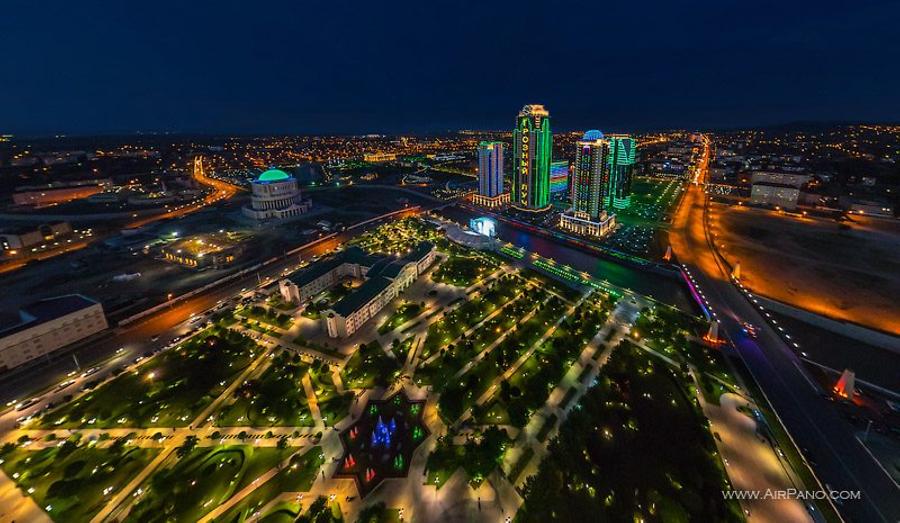 Southern sunsets are short, and the mosque beautifully glows in the descending ascending darkness. The surrounding park and fountains are illuminated as well, which makes it an inviting place for an evening stroll. The Grozny-City towers in the background, colorfully illuminated in the eastern tradition. "Grozny is the best city on Earth," says the multi-colored running text line on one of the towers. Moreover, when nightly prayer is over, moths attracted by the light circle around the minarets, becoming pillars of light reaching out to the sky... 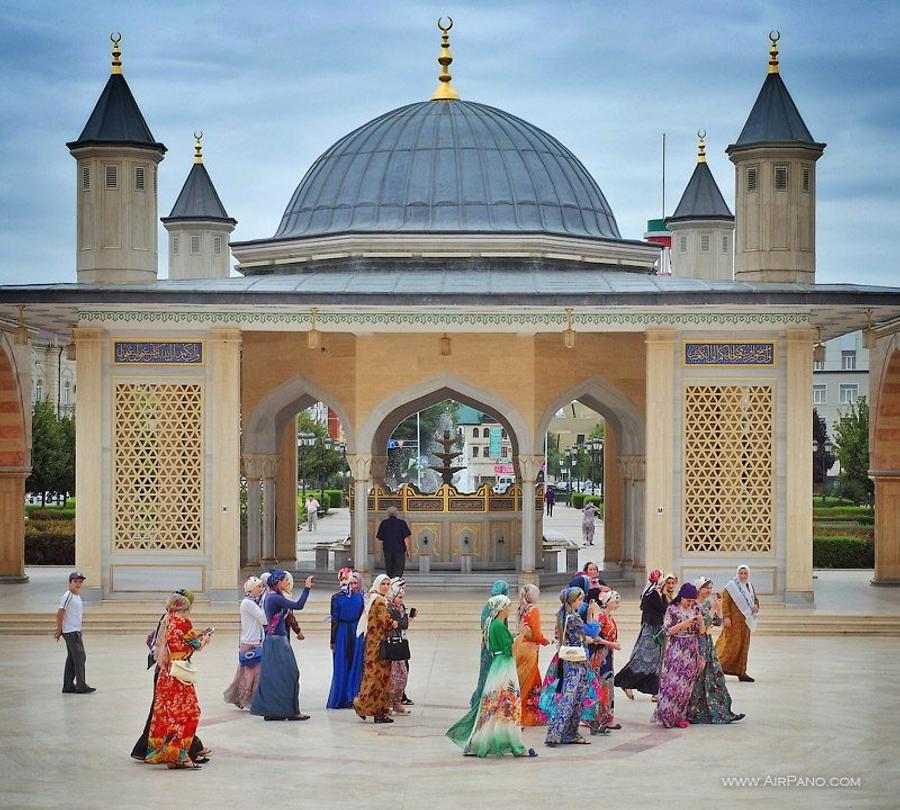 When telling a story about this photo expedition, we cannot leave out the famous hospitality of highlanders. We were welcome everywhere we went, and even strangers were very friendly and kind and unceasingly helpful.

My special thanks go to the people that supported us during this trip and helped us organize it: to Chairman of Russia ?ufties Council — mufti Sheikh Rawil Gaynetdin, Deputy Chairman — Rushan hazrat Abbyasov, Chairman of Spiritual Administration of Muslims of Chechen Republic — Salah hajji Mezhiev and Ildar Yambikov.

I have only warm memories of our trip to Chechnya. There is no doubt that I would like to return there to learn more about the tradition and culture of Chechen people. And now, we invite you to see the city of Grozny through our photo panoramas!