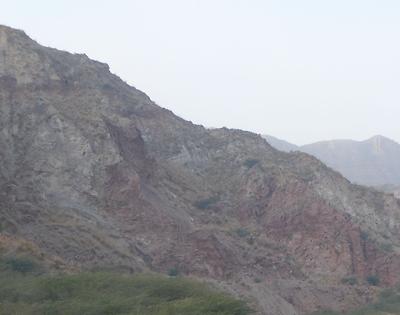 Typical part of Salt Range
Photo: H. Maurer, 2016, under CC BY-SA 3.0
The Khewara Salt Mines are located in Khewra 32.6553276,73.0088711 , some 200 kilometres south of Islamabad and 245 kilometres north of Lahore, a bit East of motorway M2 at 288 meters above sea level, i.e. 300 m lower than Islamabad. This is quite noticeable on the drive from Islamabad, as the road M2 is more or less horizontal for a long distance, but eventually leads in many turns down a mineral-rich mountain range called Salt Range. As one reaches the bottom, one turns off M2 to the east towards Khewara. The total length of the Salt Range is 300 kilometres.

The Khewara Salt Mines are the second largest salt mines in the world, second only to the salt mines in Goderich, Ontario, Canada. The salt mining industry in Goderich is one of the oldest in Ontario. In 1866, petroleum exploration crews found a massive ancient salt deposit about 300 metres under the surface. To date, 150 million tons of salt have been produced from the mine. The mine is now able to produce more than 9 million tons a year. Harvesting began around 1975. The mine itself is 530 metres below surface, extending 7 km2 under Lake Huron. The mine is the largest underground salt mine in the world. It runs more than 500 m deep under Lake Huron and goes into the lake for 7.5 km! See videoclip (2:23).

The Khewra Salt Mines in comparison are turning out 325.000 tons of salt per year, and an estimated 220 million tons over its lifetime. This is barely even a dent in the massive salt stores here which are said to be close to 7 billion tons. Covering an area of 110 km2, the massive mine has over 40 kilometers of tunnels running some 730 meters into the mountain under which the salt deposits are found. See videoclip (6:18) 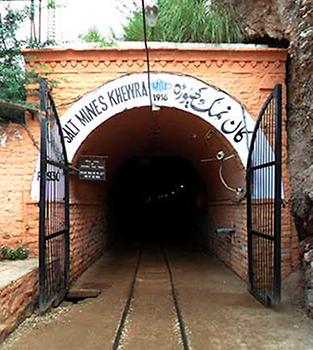 Main entrance into mine
Photo: Courtesy of Khewra Mines, under CC BY-SA 3.0 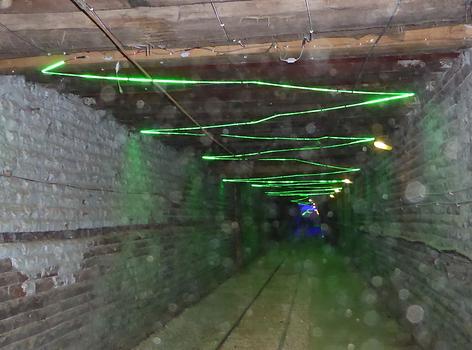 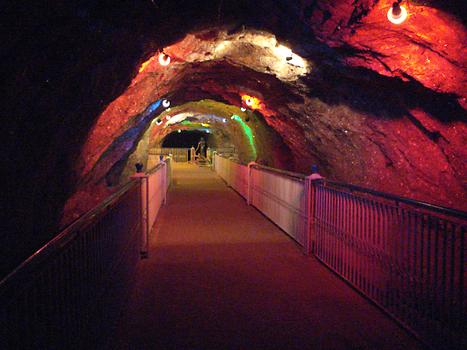 Crystal Valley. One of the tunnels open for tourists in the mine. The crystals in the walls and roof are lit by different colors of light.
Photo: smsarmad in Wikicommons, under CC BY-SA 3.0 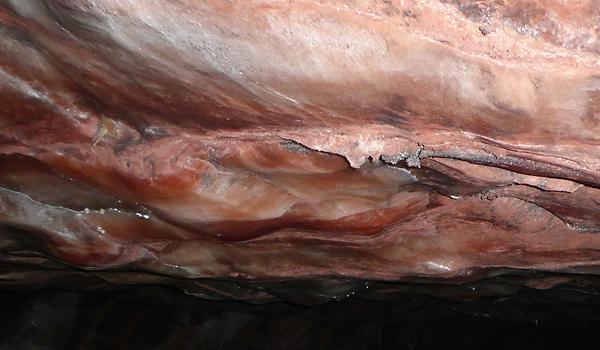 Officially, salt mining wasn’t recorded until the 1200's under the Janjua-Raja’ tribe, but salt has probably been mined and traded here since Alexander’s time. Indeed it is reported that a horse of Alexander the Great discovered the salt: In 326 BC, Alexander the Great, conquering an empire ranging from Europe into Africa and Asia, was making his way across Pakistan. Stopping his army for a rest in the area now known as Khewra, Alexander’s horse began licking the stones on the ground. Seeing that all the horses were doing so, a soldier himself tried one and found that the rocks were quite salty. The Khewra salt deposits had been discovered. 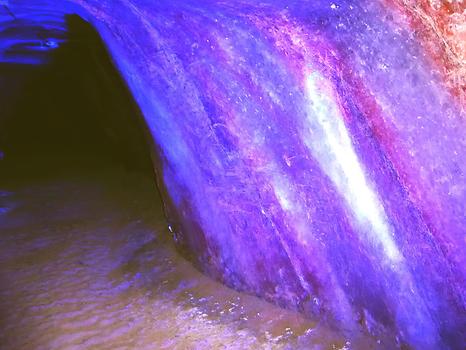 Rocksalt. Even here nature is "enhanced" by changing colours, mainly for the benefit of children visiting with their school classes
Photo: H. Maurer, 2016, under CC BY-SA 3.0 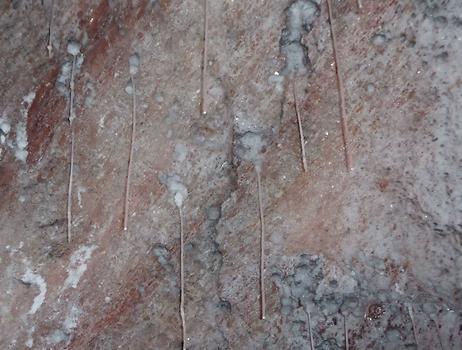 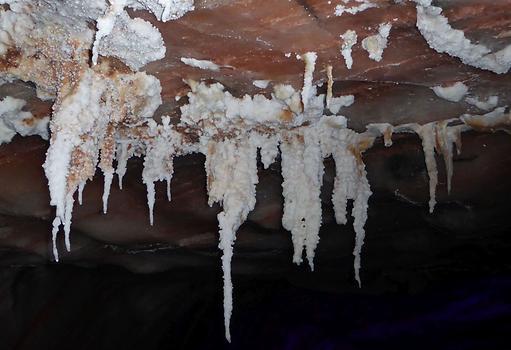 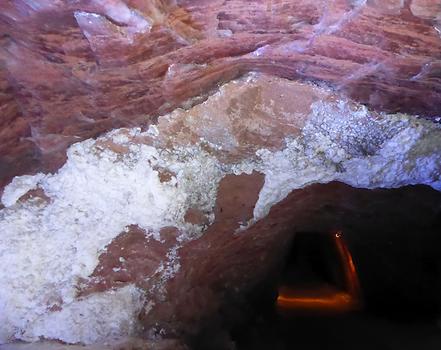 Rocksalt is brownish-reddish. If water dissolves it and it crystallizes again, it is usually white, although in rare cases clear glass-like pieces can also be found
Photo: H. Maurer, 2016, under CC BY-SA 3.0 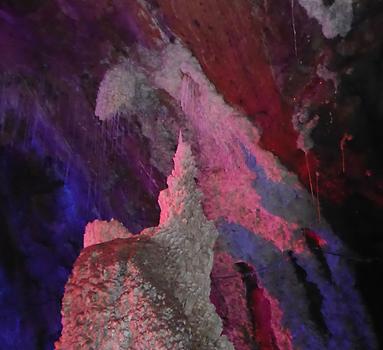 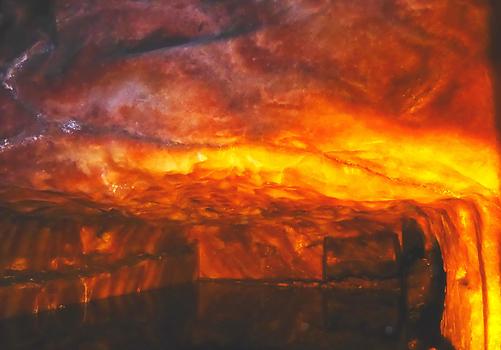 Salt is usually mined in the form of bricks of rock salt in rectangularly shaped caverns that tend to collect water at the bottom in "brine ponds"
Photo: H. Maurer, 2016, under CC BY-SA 3.0

The rocksalt, usually mined in the size and form of a typical clay brick, retains a bit of its colour when ground. It is often sold as "Himalayan salt" and the impurities are said to improve the taste.

To keep the huge space from collapsing, only fifty percent of the salt found is mined; the other half serves as support columns to hold up the mine. With such a massive area, a large workforce, and the ease of carving and building with salt bricks,it is not suprising that some interesting sights have been built within the salt mine.

Among the earliest structure built within the mine is the small Shahi Mosque, complete with a small salt minaret. Built more recently, specifically to attract tourists, are small salt versions of the Great Wall of China, the Mall road of Murree, Lahore’s Shimla hill, and the Minar-e-Pakistan in Lahore. Both the mosque and the miniatures are built from salt bricks, which vary in color from red to pink to white, and which are now lighted electrically and radiate a beautiful warm glow.

At times, the many colors and bricks of light give the mine a sort of disco-Yellow-Brick-Road look. Other sights — and there are many — include a 75-meter-tall “assembly hall” chamber with stairs spiraling up the walls, a 25-foot-long Salt Bridge called the Pul-saraat (an allusion to the Islamic “Pul-e-Saraat,” a bridge you must cross on Judgment Day which is described as “thinner than a strand of hair and sharper than a sword”), brine ponds, and beautiful salt-crystal formations such as stalactites, like the few shown above. 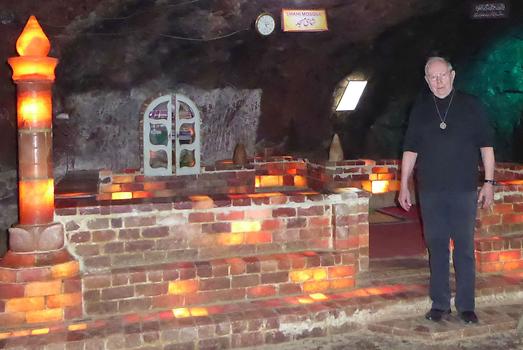 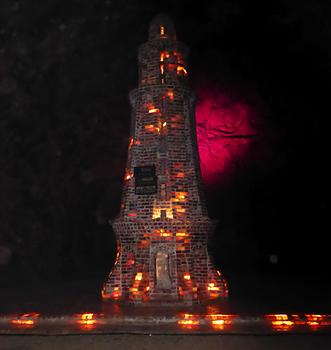 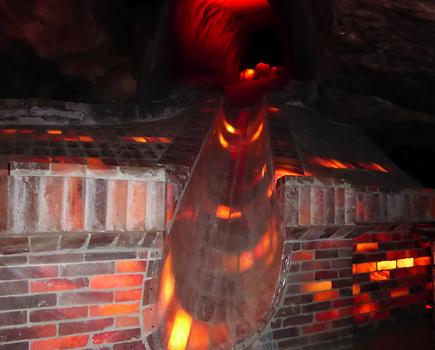 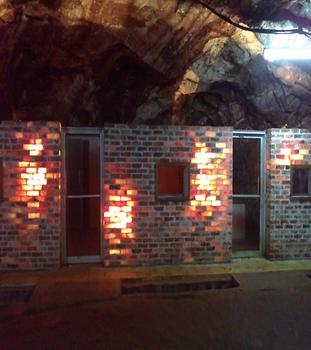 Walls made of rocksalt
Photo: AAdele Wikicommons, under CC BY-SA 3.0

Before the advent of the internal combustion engine and earth moving equipment, mining salt was an expensive and dangerous operation, due to rapid dehydration caused by the constant contact with the salt (both in the mine passages and scattered in the air as salt dust). Among other problems the excessive sodium intake causes serious problems.

While salt is now plentiful, until the Industrial Revolution it was difficult to come by, and salt mining was often done by slave or prison labor. Life expectancy among those sentenced was low. In ancient Rome, salt on the table was a mark of a rich patron; those who sat nearer the host were "above the salt," and those less favored were "below the salt".

Note that the Latin word for salt is 'sal', from which words in other languages are derived, like 'Salz' in German, 'salary' in Englisch, similar to 'Salär' in old German. 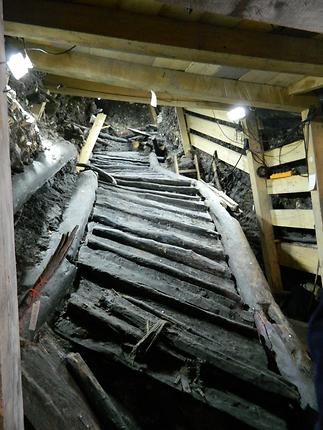 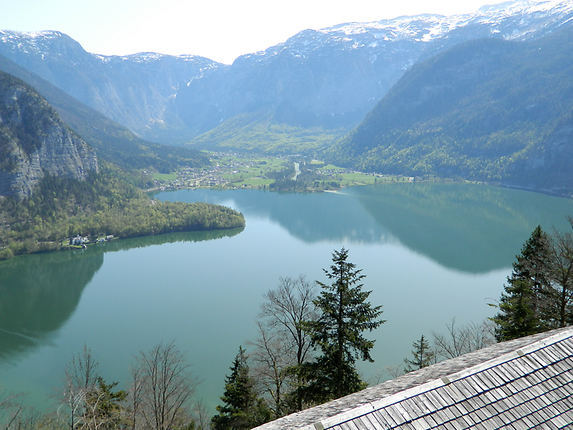 Lake Hallstatt as seen from the entrance to the mine
Photo: P. Diem, 2015, under CC BY-SA 3.0
In central Europe major saltmines are (in alphabetical order) in Austria, Bulgaria, Germany, Italy and Poland.

The salt mine in Hallstatt, Austria Hallstatt deserves special mentioning, since it has been in operation for some 4.000 years! After all, even a historic cultural period is called "Hallstatt period". Recently, the wooden stair shown to the left was found during the mining process. It was carbon dated to 1341 BC!

Lest this contribution gives the wrong impression, it has to be clearly stated that salt does of course not only come from salt mines, but is also produced in large quantitities from the evaporation of seawater, rather than by being extracted from sedimentary deposits. Such sea salt is mentioned in the Vinaya Pitaka, a Buddhist scripture compiled in the mid-5th century BC. The principle of production is evaporation of the water from the sea brine. In warm and dry climates this may be accomplished entirely by exposing the brine ponds to the sun, but in other climates fuel sources have been used. Modern sea salt production is almost entirely found in Mediterranean areas and other warm, dry climates.

China (25%), United States (14.5%), India (8%), Germany (6%) and Canada (4%) are- with together about 58% of the world production- the leading salt suppliers in the world. Despite the size of the Khewra salt mines, Pakistan contributes less than 1%, and among the central European countries with salt mines only Germany produces much more than 1%.