Sky and light over Mongolia# 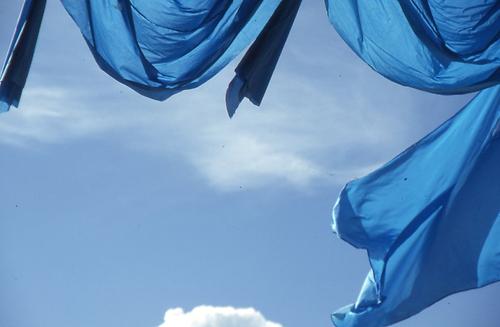 In our collective knowledge Mongolia - probably due to the big Gobi desert- is often thought of as a barren country at low altidtude. However, nothing could be more wrong. This second largest land-locked country of the world is criss-crossed by mountain ridges: Its average altitude is 1580 m. There are peaks as high as 4.000 m and quite a few glaciers, mind you usually not very large.

Mongolia has a truly continental climate. Average daily winter temperatures are 25° below (centigrade) and 20° in the summer. Precipitation is only 200 - 220 mm, in the desert areas of the Gobi often less than 100 mm. 80 - 90 percent of the precipitation is during May and September. This is essential for the growth of the grassland necessary for a nomadic way of life. The country varies from alpine regions to grassland, meadows and sandy steppes. Permaforst can be observed in many places.

Putting all this together it will not come as surprise that Mongolians see the sky as the most important component of their conception of the world. Buddhism that reached Mongolia in medieval times, is still much in competition with what is called Tengrismus, a term derived form the name of the god of the sky, Tengri. Tengrismus is characterized by animalistic and shaman practices and rituals. What makes life meaningful is to live in harmony with the environment, "with everything below the sky". Human beings are somewhere between the "eternally blue sky" (mong. mönkh kökh tengri) and Mother Earth (mong. gazar eje). "High up in the sky" Tengri, god of the sky, lives in a kind of paradise that is quite similar to what is found on earth. Shamans are able to visit Tengri in his heavenly region, where they can meet people who lived earlier, establishing communication between the living and the dead. Events happening in the sky like lightning and thunder, or rainbows, or clouds, are often interpreted as messages from god Tengri.

Few countries can offer a variety of sky-scenarios like Mongolia. A deep spiritual beauty is overwhelming all who visit the country with open heart and open eyes, in a Contry where much of nature and its phenomena have not yet been destroyed by human technology.