A Garden made only of sand and stone#

All photos were taken by the author in 1988 in Kyoto gemacht. They are part of the archive "Picture-flood Jontes".

The most famous garden of Japan delights not only with its lush plant life, ancient trees and artful stone lanterns. It is a dry landscaped garden and part of the most important monastery of the Rinzai-school tradition of Japanese Zen Buddhism. Since 1994 it is also a UNESCO World Heritage Site. The name of the monastery Ryoan-ji means approximately „the dragon that comes to rest“. Its foundation dates back to the year 1499. After fires restored, the garden has not changed for more than 300 years.

Zen Buddhism includes a strong aesthetic principle, which is also expressed in the famous Japanese tea ceremony. A simple thing shall has to be done perfectly in meditative calmness. In the 5th century, this direction of Mahayana-Buddhism found its expression in China, built on special forms of meditation and inner vision and was influenced to some extent by Taoism. It was introduced in Japan by monks in the 12th century. The name Zen is the Japanese form of Chinese chán, the roots of which lie in the ancient Indian Sanskrit word dhyana, which means „Meditation“.

Zen teaches that inner and outer worlds are inseparably linked with each other. In this way of thinking, life aims at experience and action in the now and includes feeling, thinking and sensation. To experience illusion or emptiness during meditation is rejected unlike in other directions of Buddhism. One philosophizes also about reason that is relativized by paradoxes (Jap. Koan). A known Koan is to clap with one hand. This results from the attempt to talk about Zen.

The Hojo Teien is not larger than 30 by 10 meters. It is surrounded by a 1.8 m high wall, which is a national treasure. The completely flat base is covered by a layer of fine white gravel which is raked by expert hands repeatedly, and thereby obtains a line pattern that flows around the groups of rocks. In this area, five groups of stones are placed in such a way that one could think that this was done by pure chance. These groups are surrounded by moss. There is no place in the garden from which all fifteen stones are seen. Above the garden in front of the monastery there is a terrace for sitting. When sitting there and watching the garden, a sense of tranquility will slowly take hold of you, as the author was also able to experience.

Attempts to provide an explanation have been treid, but there is no spiritual background. Some say they see „peaks in the sea of clouds“. Others recognize „islands in the sea“ or even a „tiger that carries away its young“. Visitors are left to themselves, but nobody leaves the garden with agonising helplessness.

You can also admire the wall, which was built from a strange mix of mortar soaked with oil. Over the centuries, the oil reached the outside of the wall that resulted into esthetic patterns and structures. 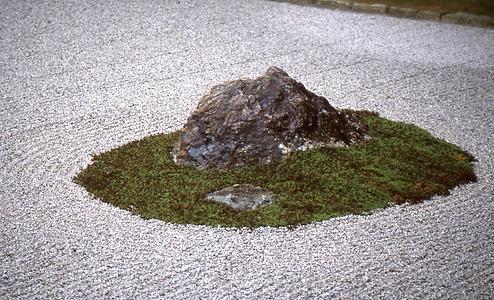 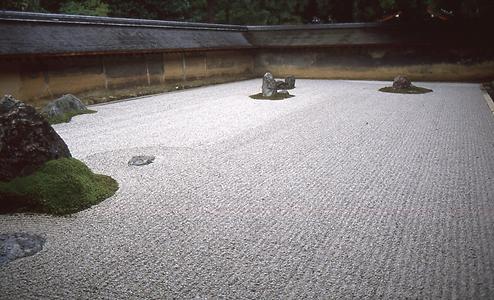 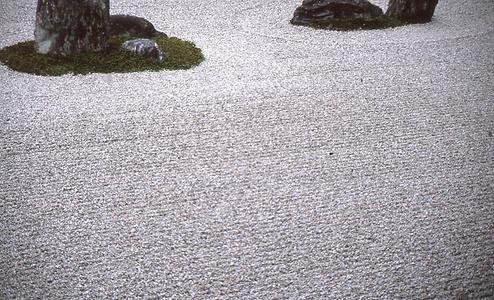 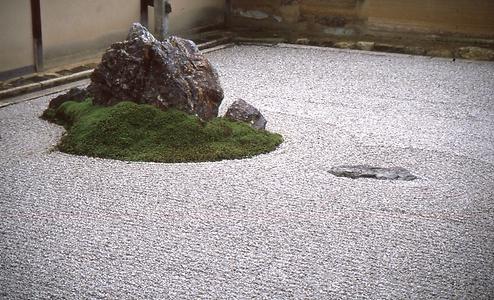