When filming picturesque places all over our planet AirPano doesn't forget its wonderful inhabitants. Penguins, brown bears and giant pandas, sharks and other fish became subjects of our panoramas. In Cuba we were able to swim with a big jellyfish and it was really a fascinating performance. Therefore, when I found out that in Palau there is a whole lake of jellyfish, I wanted to go there immediately.

From this moment adventures turning into difficulties began: as if some forces found out about my plans and decided to play a game of chess, with me as a figure on the board. "One stop forward — to steps back", and in this way was the whole period of planning to photo the jellyfish. Let's go through it step by step. 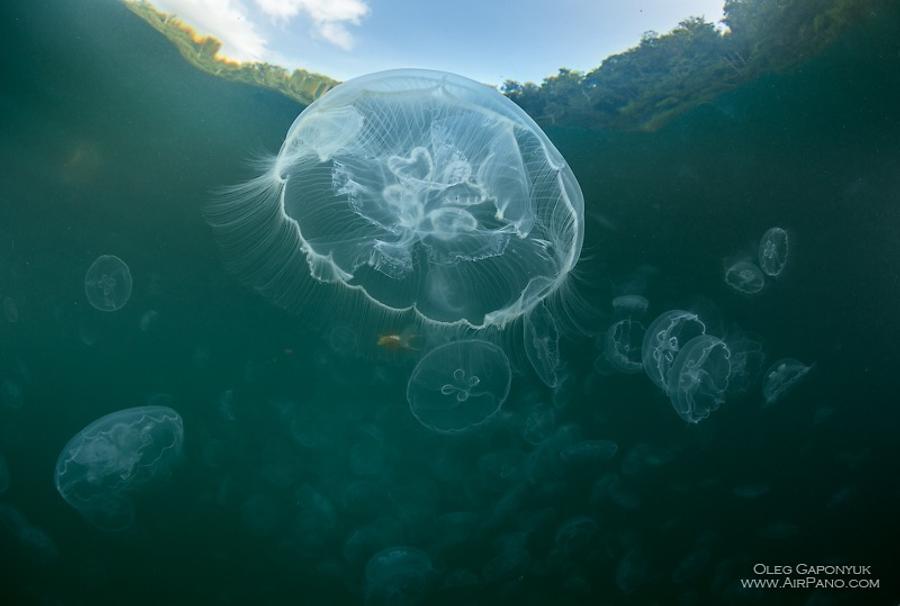 The island based government of Palau is situated in the Pacific Ocean, about 800 km far from the Philippines and Indonesia. It is a long way to go, but my dream of going there was broken by another reason. While gathering information for the journey I found out that this lake doesn't exist anymore. To be correct, the lake itself is still there, but the fragile environment was destroyed by tourists that were using sun protection cream and went in the water with it. The cream was poisonous to the jellyfish. In order to save the remaining representatives of nature the lake was closed for visitors. 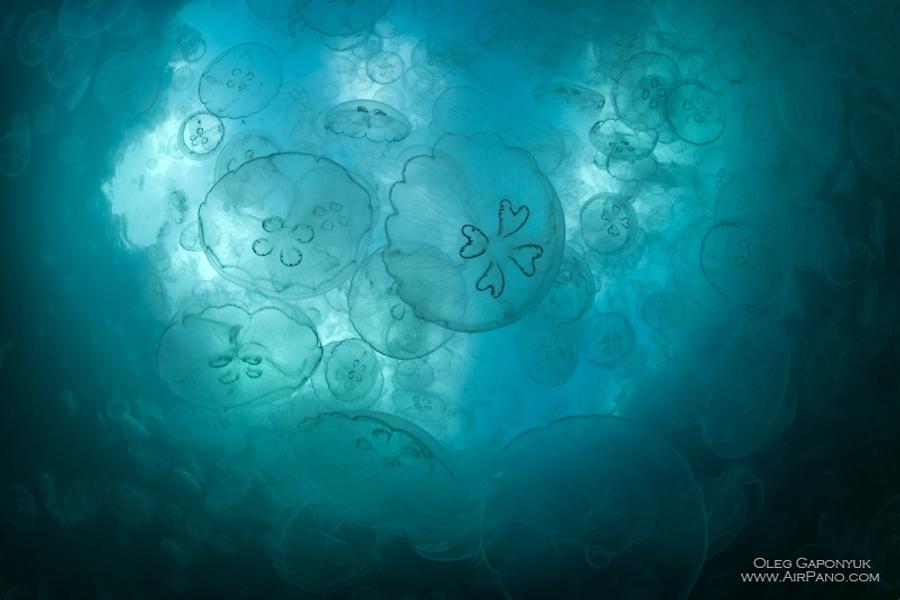 This would have been a good reason to back off and cancel the trip, but no way! Coincidentally I found out that there is a similar lake in Indonesia and we were already planning to go to Raja Ampat a couple of weeks later. My dream was coming true again. But nobody knows where this lake is and its coordinates have to be discovered before the trip. The thing is that Raja Ampat is a very inconvenient place for travelling: the only connection between a thousand islands is by boat (there are no helicopters or seaplanes). In the neighboring West Papua live at least a hundred of tribes that haven't seen civilization and somewhere you may come across cannibalism.

Looking up the info in the Internet was fruitful: I managed to find the works of Indonesian scientists that described three jellyfish lakes that were luckily situated not far from the filming destination of AirPano. 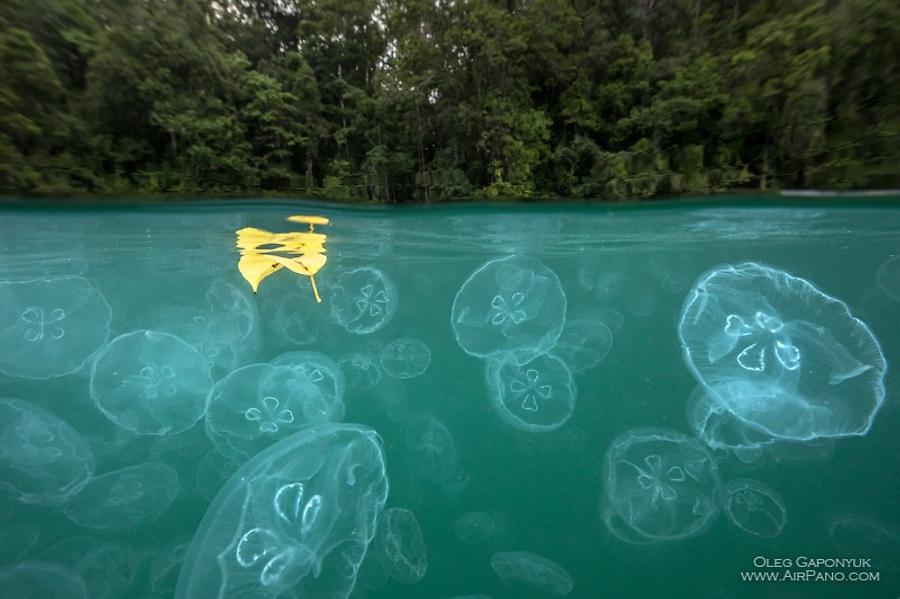 But later something went wrong again. The boat that we booked for making the underwater footage was burned! Nevertheless, the departure is almost near and we have to find another vessel.

I found out about this accident by an unbelievable and lucky coincidence: during the Dive Show exhibition in Moscow the participants from Indonesia were watching the burning of the boat at the time, when I was walking by their stand.

Later AirPano photo crew found the new vessel and here we are in Indonesia.

When we finally had time to visit the lakes (at least one of them!), it became impossible: we were told that there are no jellyfish there at all. Could have the tourists killed them like it was in Papua? Good thing that we didn't come here only for the lakes. But the high forces don't allow me to forget about my plans: in the hotel a guide suddenly tells me about a place, where there are a lot of jellyfish. Technically it was not a lake, but a small gulf in a snaky bank line of the island, which did not make the acquaintance with the sea inhabitants less interesting. 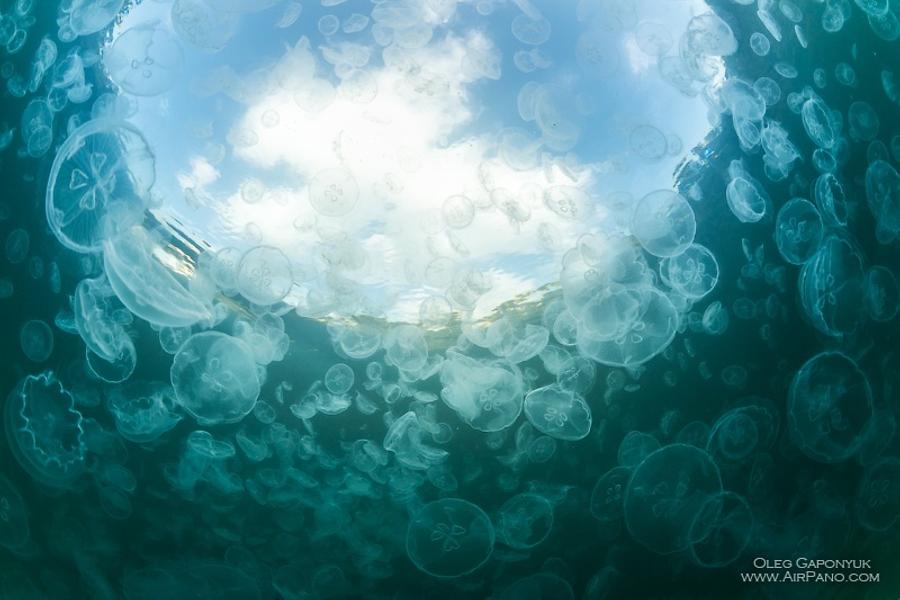 A small, but not very important obstacle is the lack of information n when the jellyfish appear: the scientist wrote that they could be seen in midday, while the guide insisted that the creatures don't like sunlight. We went to the gulf in the second part of the day and were fortunate: the water here was of yellow-green color, visibility very bad, so in the daytime this place was absolutely not interesting. But near the evening the jellyfish start coming up from the depths and it is worth seeing. There are a lot of them, as if they compile a huge sphere that takes over the whole territory.

The jellyfish are not a good company for a diver. Despite the fact that descending into the porridge of jellyfish is not dangerous, being touched on sensitive parts of the body like the neck or lips is rather painful. 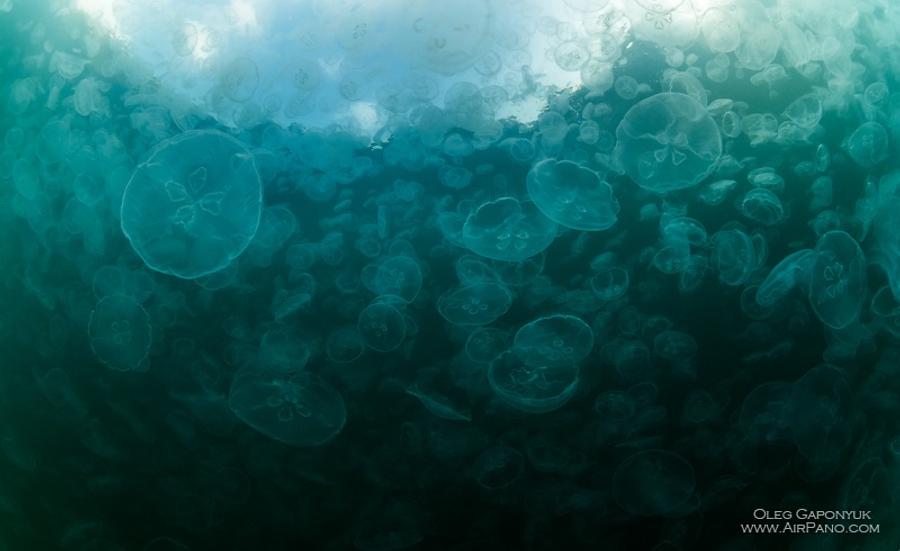 The first day was reconnaissance: I made only photos. Later we returned there with my colleagues to make a 360°-video shoot like we planned.

If you watched this game of chess, then it is obvious that I won. But the enemy still had something in his sleeve: the captain decided to take us to "another jellyfish gulf". Good thing I had the correct coordinates in my phone.

All in all, a thousand of incidents and insistence and the panoramic footage of the basin full of jellyfish is complete!