The territory of Indonesia includes the Raja Ampat archipelago located in the waters of the Pacific Ocean in West Papua province. AirPano sincerely thanks Max Guzovsky for photographing this remote and exotic corner of the Earth.

The name "Raja Ampat" means "Four Kings". The local legend tells of the royal beings who hatched out of the eggs found by a woman. They occupied four biggest islands of Raja Ampat; there were three other eggs that became a ghost, a woman, and a stone.

This strange inexplicable legend is hardly understandable for a westerner and does not explain the most significant feature of the archipelago: its nature. Raja Ampat is a part of the so-called "Coral Triangle" which is distinguished by the richest marine biodiversity in the world.

In fact, the water area of these islands is the habitat of the greatest number of living beings — there are more species in this region than in any other area of the Coral Triangle which includes Indonesia, Malaysia, the Philippines, Papua New Guinea, the Solomon Islands and East Timor. It is the home for more than 500 species of corals, a thousand species of fish and around seven hundred species of shellfish, lots of whales, dolphins and many other members of marine life. All it makes the archipelago the richest marine ecosystem in the world.

The coastal city of Sorong is the gateway to Raja Ampat — it is located on the north-west coast of West Papua. In the beginning of the 20th century, oil and gas resources were found here, and since then Sorong has become one of the main oil and gas frontiers of Indonesia. At the same time, this city can hardly be identified as industrial: its small houses scattered among green hills create a charming and serene atmosphere. 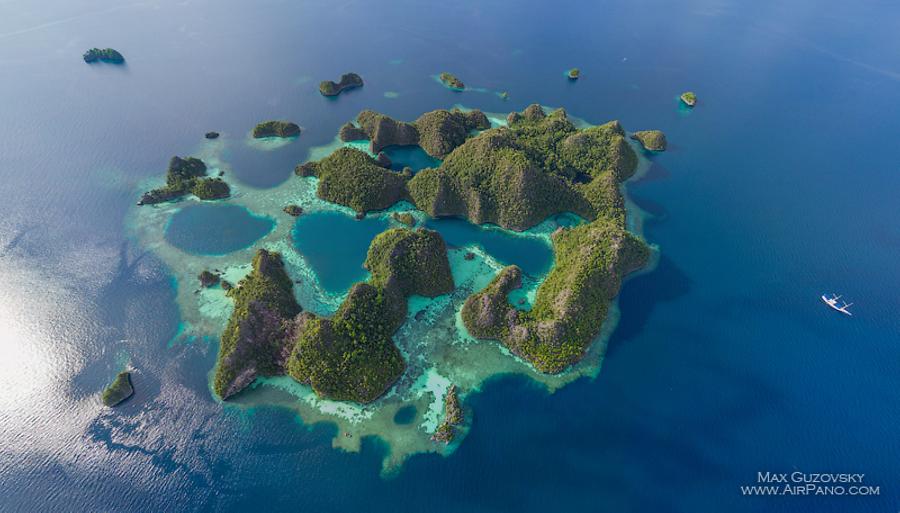 Unfortunately, no journey can give an opportunity to have a look at all the 1,500 islands of the archipelago. But even those few shown in the panoramas will make you feel the magnificence of the local nature.

Located right in the centre of the archipelago, the island of Pulau Mansuar has huge attracting opportunities for diving and snorkelling. Thick jungles of this island are said to be the home for the worldly known bird of paradise; you can see many endemic species of fish in its mangrove forests, and finally, all this beauty is crowned by the abundance of corals. Mangrove Homestay, a chain of traditional Papuan accommodation, exemplifies common island Indonesian architecture: bungalows on piles will make you feel like a local for a while. By the way, at a low tide, one can walk straight to the neighbouring island Kri, and it makes Mansuar a particularly interesting destination. 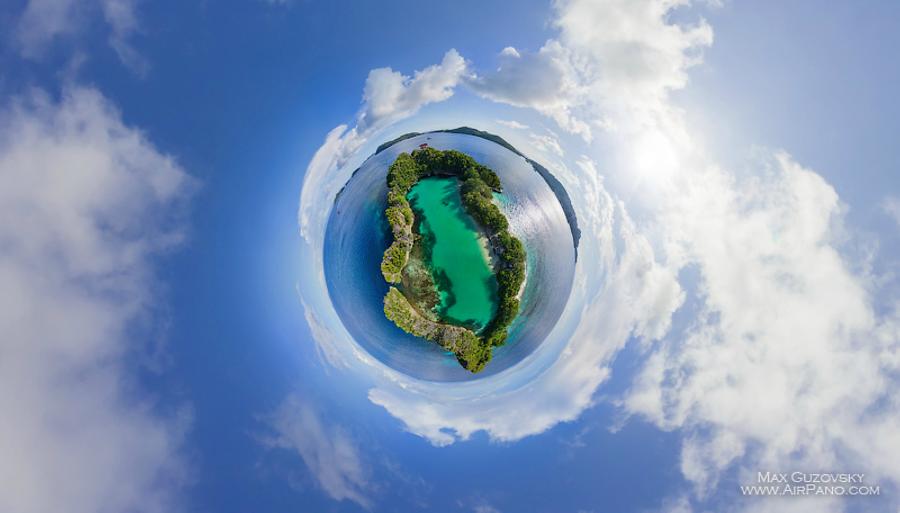 The Fam Islands group is among world's best places for getting acquainted with sea animals and the coral diversity. One of the most popular islands is Pianemo, and Fam island itself has a nice view point overlooking the nearest small islands dispersed in the emerald lagoon. This view eventually became a recognisable landmark of the whole archipelago. And our panoramas captured from a greater height will allow visualising the picture to the full. 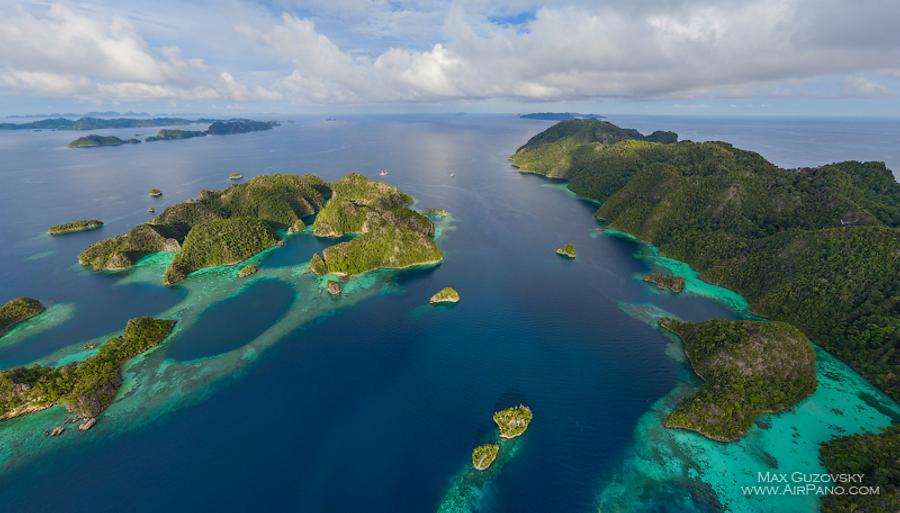 One more place that has been included in the panorama series dedicated to the Indonesian islands is Fort Belgica. It is located south of Raja Ampat, on one of the Banda Islands, a part of the Maluku archipelago.

Till the middle of the 19th century, the Banda Islands had been the world's only source of nutmeg and they were known as the Spice Islands. In the end of the 17th century, the Dutch drove the Portuguese out of these lands and in order to protect new possessions they built a new fort on the site of a former fortress. Neverending earthquakes, humidity and low-quality materials made the fort be constantly restored; the modern five-angled stone bastion had been formed till 1673.

However, the fort has never served its purpose: in 1796 it surrendered to the British army without a single shot. Eventually, there were fights for possessing the fortress which damaged the construction. In the 20th century, the Indonesian government funded the complete reconstruction of the monument and in 2015 together with all the Banda islands it attracted the attention of UNESCO experts. They announced the history of the islands and its picturesque seascape to be the candidates for enlisting in UNESCO World Heritage Register. 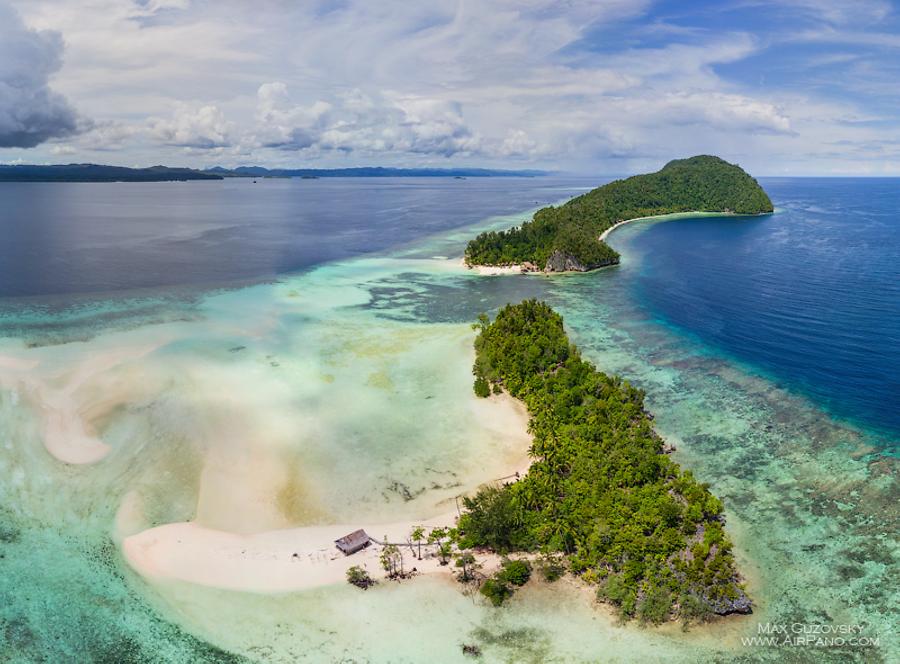 As soon as you see this corner of the Earth through the AirPano panoramas you will definitely agree with the opinion.