Jakarta — the capital and the largest city of Indonesia — is located in the northwest part of Java Island, on the coast of the Java Sea. This settlement was first mentioned in the chronicles in the 4th century BC, but officially Jakarta began its existence on June 22, 1527 when the forces of the Sultanate of Demak defeated the Portuguese, who wanted to use this strategically significant area as a place for a port. At that time the city was named Jayakarta and can be translated as "the City of Victory". And the date of June 22 is now celebrated as Jakarta's Birthday.

Practically one half of Jakarta lies below sea level. In addition to that, thirteen rivers flow through the territory of the city. All these factors, combined with high tides and precipitations, often result in flooding. One of the most destructive floods occurred in Jakarta in 2007: certain areas of the city were flooded with water up to four meters deep. At the same time, Jakarta is getting lower at about 10 centimetres each year. One more ecological issue of the city is air pollution. In the relatively recent 1950s the suburbs of Jakarta were green. Some districts still bear some "vegetative" names: Pineapple Garden, Lemon District or Nut District. Jakarta is nicknamed the Big Durian as there were a lot of fruit trees in this place. This plant is considered to appear in this area, but now the durian fruit is more likely to be associated with its strong unpleasant odour: the same one can be smelled in the streets of the city. Vegetation covers less than 10% of Jakarta's area, at the same time the number of cars in the city is increasing annually. In 2003 ecologists estimated that only during 26 days per year the air quality in the city can be considered as "good". Since then the situation did not improve at all, and now smog covers the city all the time.

Considering all these factors, living conditions in Jakarta can not be accepted as "favourable". Meanwhile, the number of citizens is always growing. As of 2010, the population of the city was estimated to be around 10 million people: those who were not afraid of thick smog, continuous flooding, or slumping buildings. And a lot of people come here for touristic purposes. 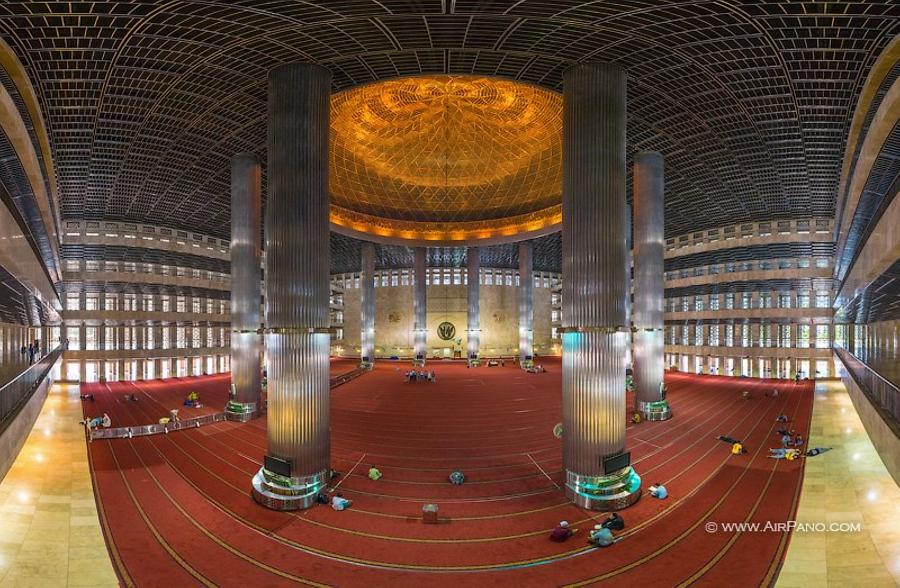 Interior of the Istiqlal Mosque

The main square of the city Medan Merdeka (Independence Square) with almost 100 hectares in area is considered to be the largest square in the world. For reference, it is five times larger than the size of Tiananmen Square in China and twelve times over the size of Place de la Concorde in Paris. Merdeka Square hosts the major sights of Jakarta: the 133-meter tall National Monument standing in the centre of the square and surrounded by parks, fountains and memorials. The official residence of the president, the Gambir Station, Istiqlal Mosque, Immanuel Church, the National Museum of Indonesia and other significant cultural and historical monuments can also be found there. Above the Ciliwung River

One of the brightest buildings of the present is the Gelora Bung Karno Stadium located in Senayan District, which is also the biggest stadium in Indonesia. It has the capacity of around 100,000 people and was created in 1960 in order to host the Asian Games (the construction was fulfilled with the help of the Soviet Union). One more significant and recent building of the city is Wisma 46 — a high-rise office and residential complex soaring to the height of 261.9 meters. It is the tallest building in Indonesia, created in the modern and late-modern styles. With concrete and glass dominating in the exterior, the main colours of the building are white and blue. In East Jakarta there is a Taman Mini Indonesia Indah ("Beautiful Indonesia Miniature Park"). It has an area of about one square kilometre and features a culture-based exposition representing the culture of the country, its architecture and nature. And our panoramas, which show the sights-in-miniature in its own way will help you learn more about Jakarta and get closer to the capital of Indonesia.