by Sergey Shandin and Stanislav Sedov, members of the AirPano Team that is a member of the global-geography Consortium.

One of the most famous volcanoes of Indonesia is situated here, on the island of Java. Its name is Bromo and it is an active volcano: its crater permanently produces smoke and steam and occasional eruptions take place every now and then (the last one was in 2012). At the same time this volcano is quite easily accessible: one can get the foot of the mountain by car and then climb the stairs to get the crater. Much easier than the volcanoes of Kamchatka, we should say. And the altitude of the volcano is not that high, only 2392 meters. That is why Bromo is one of the most popular volcanoes, hundreds of tourists visit it every day.

Actually, four more volcanoes are situated inside the Tengger caldera: besides Bromo there are Mount Batok (2,470 m), Mount Kursi (2,581 m), Mount Watangan (2,661 m) and Mount Widodaren (2650 m), but Bromo is the only active volcano among them. Outside the area of caldera there are several more summits, Semeru (3,676 m) is one of them, the highest mountain of Java Island and an active volcano as well. 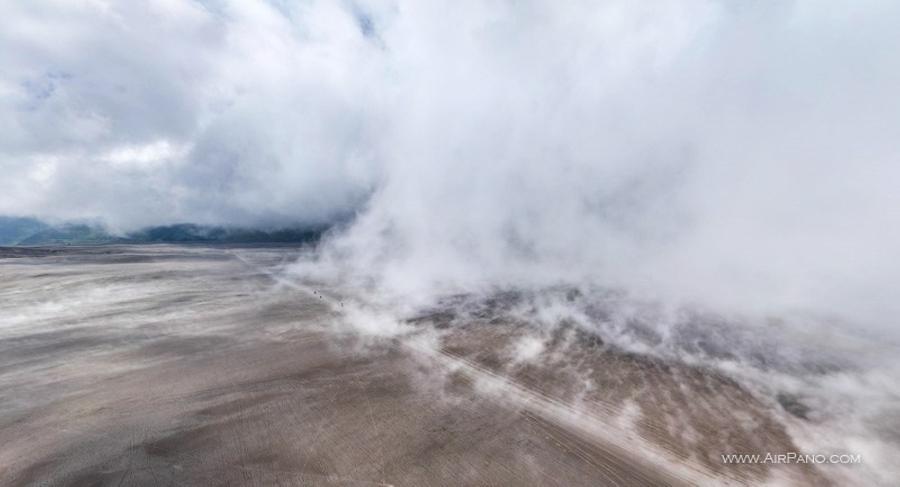 Our way to Bromo started in the airport of Surabaya town. We loaded in a bus, there was a long journey to Bromo Tengger Semeru National Park. On our way the weather was getting worse: while outside the window the fields were changing to a serpentining mountain path, it started raining. Then in an hour rain turned into a thick fog. When we reached Bromo, we could make out only clouds of greyish mist on the edge of the Tengger caldera. Somewhere behind them the volcano was hiding from us. 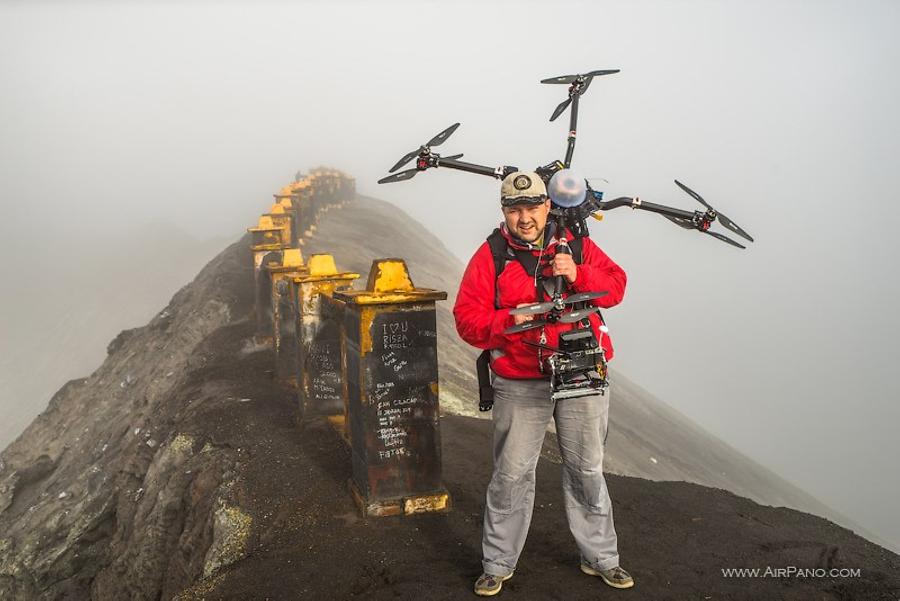 At the observation platform of the Bromo volcano

Locals convinced us that it was quite a typical weather; ‘It is always raining in the afternoon', they said, and there was a chance that the fog would dissolve allowing us to see Bromo. Meanwhile the rain was getting stronger and we were not encouraged at all. But regardless of the weather, we agreed to descend to the caldera.

It was dark when we left. Comparing to the heat of Yogyakarta and Jakarta, we were quite pleased to feel the mountain coolness at first. But very soon this cold began to chill our bones. Old but reliable Land Cruiser was carrying us over the field of hardened lava. With his teeth chattering to the rhythm of the motor, our driver was shivering and wrapping in a blanket. I was trying to get a sense of how he managed to find the road in this fog, but in vain: all the directions in this greyish haze seemed to be the same for me. But soon we saw the silhouette of a temple: we reached the place. 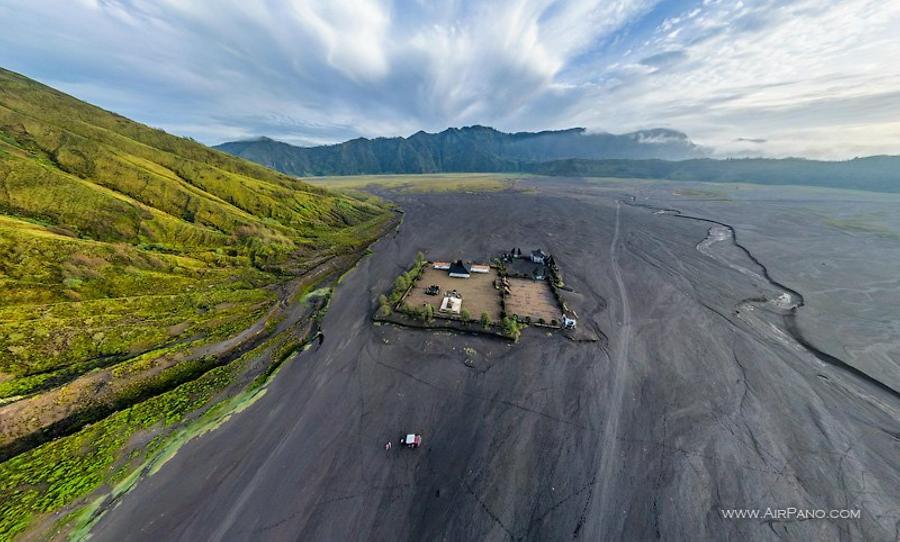 Hindu Temple of Pura Luhur Poten was built by the local inhabitants and is situated right at the foot of Bromo. The temple is rather humble, one can say even ascetic. Once a year the holiday of Yadnya Kasada, which lasts for a month, takes place here. At the celebration, people make certain sacrifices: they throw rice, fruits, vegetables, flowers, even poultry together with small cattle into the crater in order to propitiate the sleeping forces of the volcano. But despite the sacrifices, the volcano awakes once in a couple of years. Lava traces on the slopes of the mountain are the remainders of this activity.

The caldera's bottom around the volcano is covered with ashes, practically no plants can be found here. Black waves of ashes create dunes. This place is called the ‘Sand Sea'. No wonder: the sand was easily getting into our shoes. 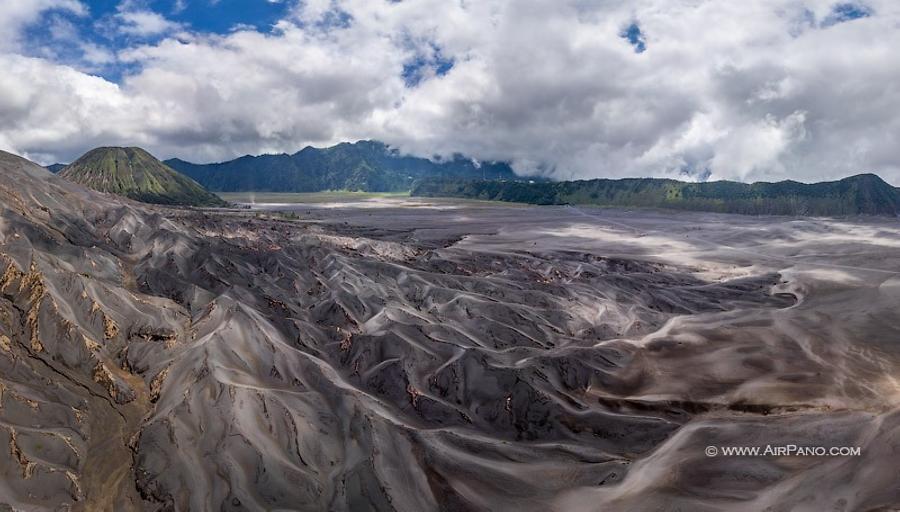 In the meanwhile the fog almost dissolved, the sun appeared. Stas launched our drone and it made its first flight, making photos for panoramas of Mount Batok and Pura Luhur Poten Temple.

With the appearance of the sun tourists filled the caldera. Very soon the number of people grew and we had to climb the crater together with the crowd. 250 steps of stairs lead from the temple to the top. The ascend seems to be not that high, especially from below. But the altitude and clouds of sulphurous fog seemed to add some weight to our equipment that we were carrying upwards. 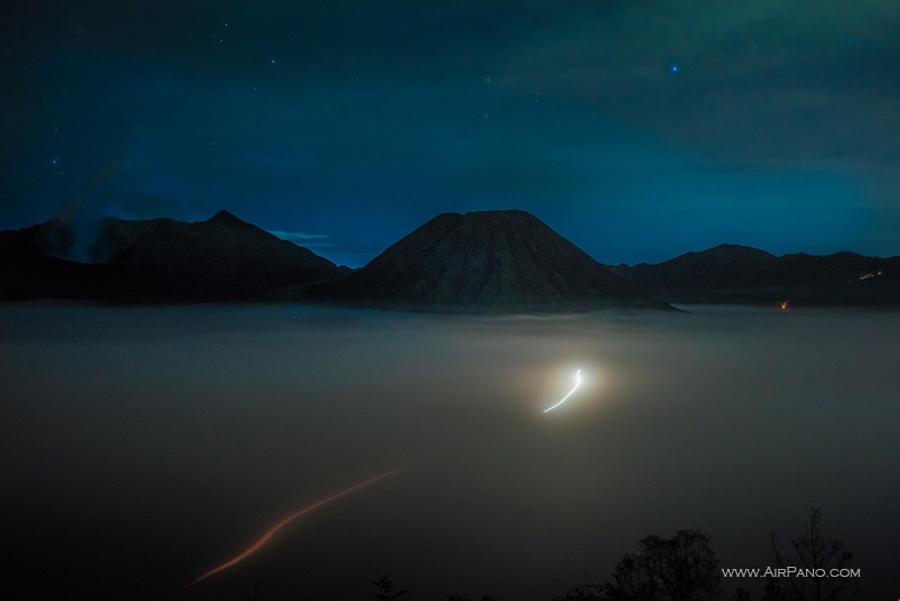 Being out of breath, we finally reached the edge of the crater where the sculpture of Ganesha — Indian deity of wisdom — greeted us. Thick smoke was coming out of the crater, we could hear something boiling down in the depths. The wind again brought some clouds here, they quickly surrounded the top of Bromo. Every now and then the sun was coming out. Sulphurous evaporations did not let us breath properly. In a while the wind changed and it became easier to breath. We launched our drone, photographed the panorama of the carter and even flew over the very throat of the volcano. The smoke of Semeru volcano could be seen in the distance. That was a good beginning of the day! 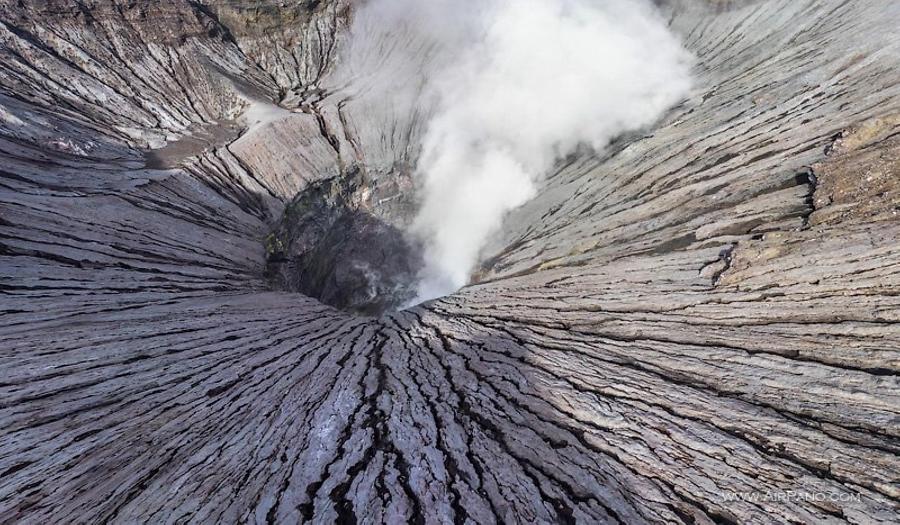 Having descended from Bromo and shaken all the black sand out of our shoes, we got into the car and set off riding. It had been raining all the previous night so that black sands wetted through. The sun was warming this packed dense sand, and the steam rose from the ground. The wind, in its turn, caught the clouds of this mist creating the visions of ghosts flying over the ground. Soon the fog grew so thick that we had to stop.

I used this moment to make several pictures with our Land Cruiser 40, legendary crossover, at the foreground. It was almost 40 years old, but still in good condition! This National Park has a good collection of these cars, and they suit the volcanic landscape. 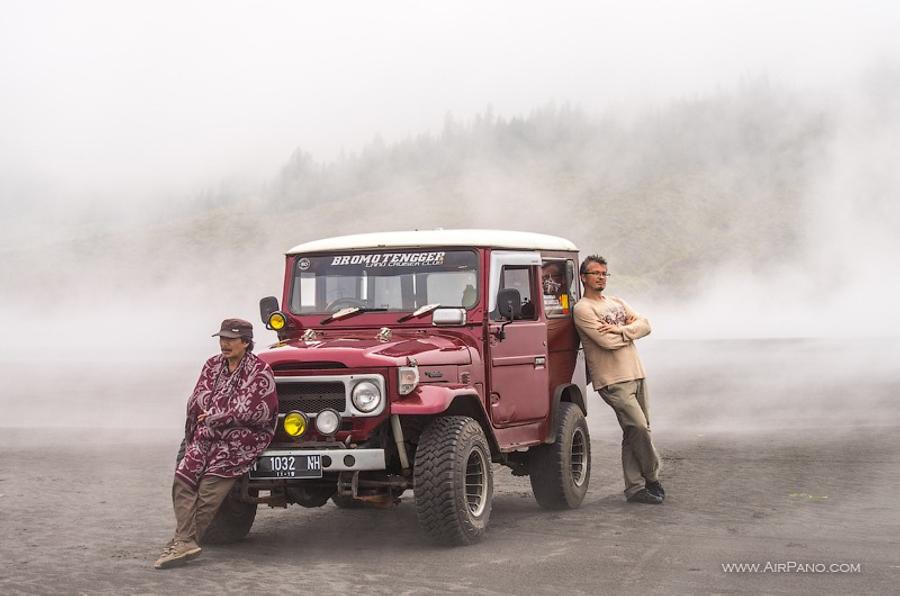 One more part of the caldera was still ahead of us — Savannah. The landscape is absolutely different here: instead of black burnt desert we could see grass and trees, clouds overflowing the edges of the caldera and crawling down the jagged slopes. So here we made several panoramas as well. 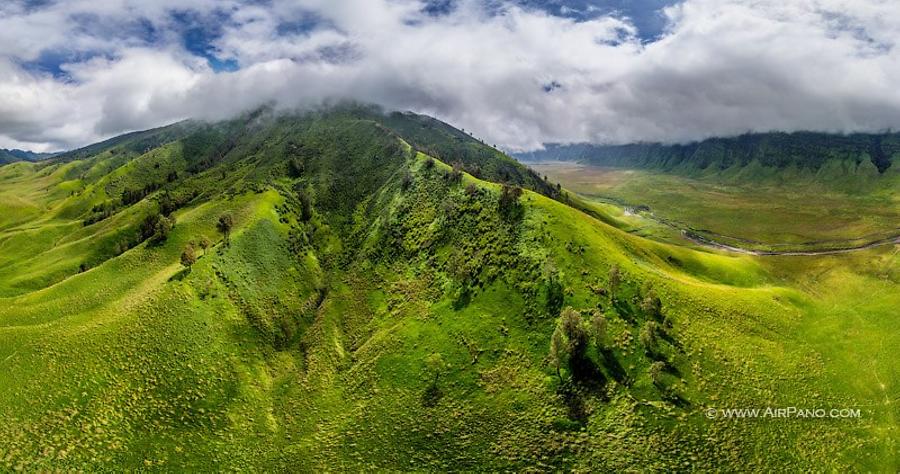 We spent several days at the foot of the volcano. The weather was changing so unexpectedly that we could not foresee what would happen in half an hour. Sometimes we had to spend several hours to catch the proper light. 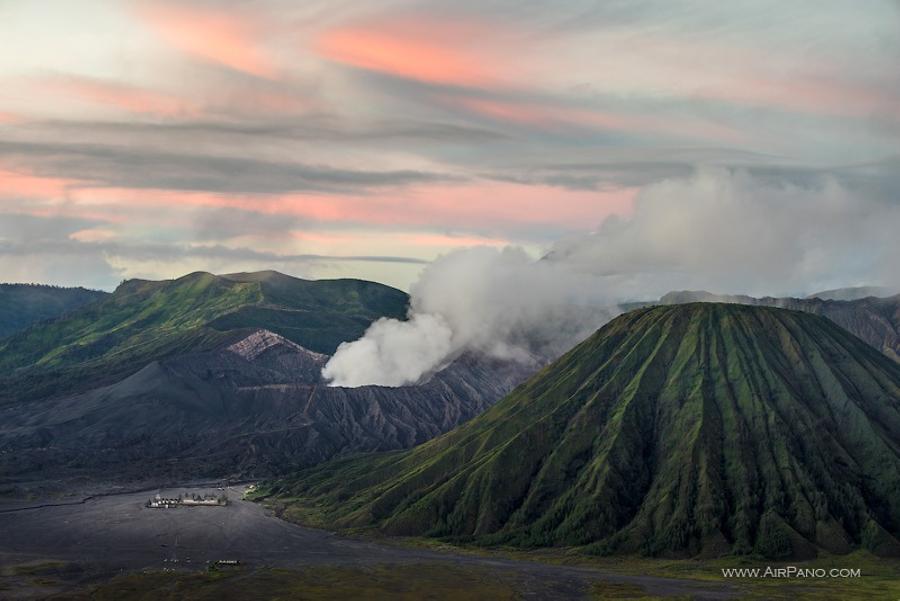 But, after all, Bromo decided to please us. In the morning the caldera was covered by a layer of fog, the mountains were poking out of this mist. The picture was incredible! The sunrise at the equator is very swift because the sun is getting up almost vertically. But we were already prepared and launched the drone at the first rays of the sun.

In the afternoon the weather changed again, as usual. When we were leaving the caldera, the heavy raindrops sounded on the roof of our bus. Rain on our way — a sign of good luck; we went on traveling around Indonesia!