The sky and light over Tibet#

The scarce pastures for livestock of nomadic people are not fertile enough to be able to grow grain needed for bread making. They can cultivate only barley which can be used for everything but not for baking bread. But there is enough milk fat to burn millions of butter lamps and to boil butter tea.

Yet the poor soil does not prevent a pure sky of rare clarity and blueness to span the country with mountains of clouds emerging from peaks covered with eternal snow. Human imagination knows no limits and recognizes in the shape of clouds a cosmos of celestial beings and divans for Buddhas, Bodhisattvas, Dakinis and Kinnaras. It is a great experience to stand under the bright firmament and see massive rain-showers rushing down in the distance, while strong storms attack yourself and you can observe snowdrifts on the peaks.

You have to know how to open your eyes in order to see all this and to see Potala, the winter palace and the grave site of the Dalai Lamas in Lhasa in its overwhelming size in the evening light. You get a sense for the feeling of highland people when sky and earth becomes one connected by light form the sky. 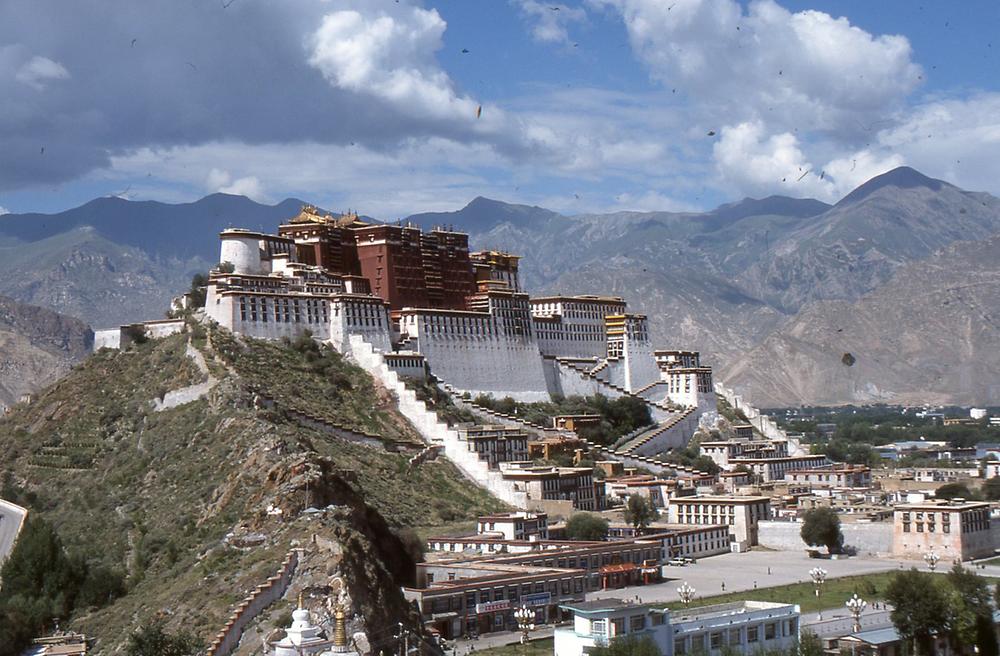 During the period of the Central Tibetan Government the Potala-Palace Ganden Phodrang (1642–1959) was the official residence and government seat of the Dalai Lamas. The huge palace is situated on the mountain „Mar-po-ri“, 130 meters above Lhasa, the capital of the Tibetan Autonomous region.

The following collection of pictures presents an unusual view of Tibet: Not the religion, the monasteries, the individual people, or the history of the country are shown. But we look at many places in Tibet with our head looking forward and up to understand how the country has formed and is forming its people. This level of abstraction may well lead to a better understanding than showing many concrete bits and pieces.

To the German version of this introduction