Photos and text by Sergey Shandin and Stanislav Sedov, members of the AirPano Team that is a member of the global-geography Consortium.

The Great Wall of China truly deserves its name. Literally the name is translated as "the 10,000-Li Long Wall". "Li" is an ancient Chinese unit of distance measured by feet. But for the modern people it is easier to imagine it in more familiar units of measure. In this way, the length of the wall stretching east to west is 9,000 km, but when counting with all the branches its total length is more than 21,000 km — long enough to encircle half of the globe! 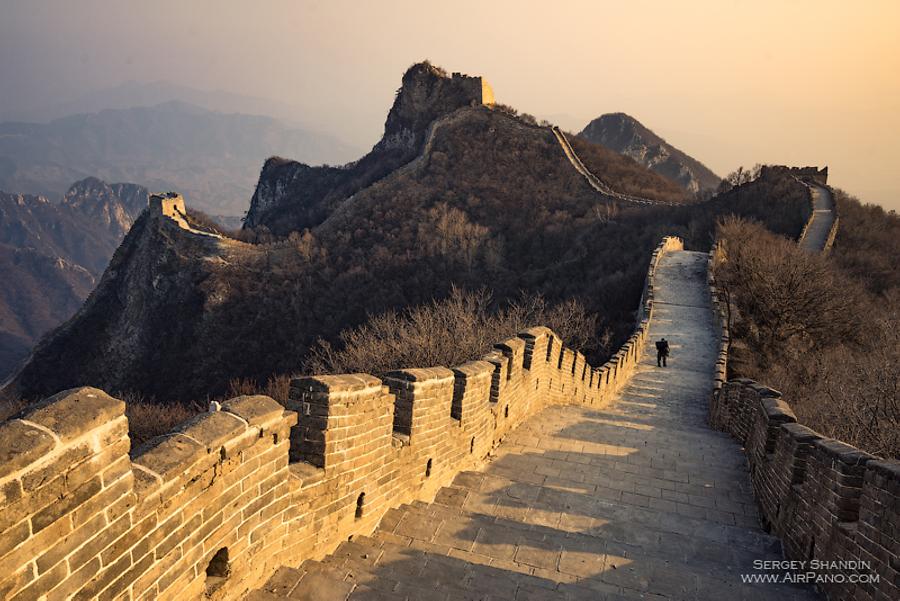 The wall begins in Shanhaiguan district. This part of the wall is called "the Dragon's head" and rises right out of the water, not allowing to bypass it. Then the wall goes through the north to the west, climbing the spurs and descending to the abysses, and ends in Gansu Province.

The width of this construction is 5-8 meters; some sections of the wall suitable for several horse riders running side by side. Now you will not meet the riders, but instead of them there are crowds of tourists on the wall. That's it, the Great Wall of China is one of the most known monuments of the world.

But still, there are some hardly accessible corners of the wall, not attended by tourists. That's where we went — the place called "Beijing knot", a branch point located in the mountains about 60 km north of Beijing.

This part of the wall is truly wild and inaccessible. Some flat sections often gives way to steep ascents. The wall repeats every curve of the rocky landscape constantly rising up and falling abruptly. The area is pretty dangerous, and accidents often occur. Narrow steps sometimes turn into almost vertical barrier with the angle of 80 degrees. The names "Stairway to Heaven", "Eagle's flight", "Cut on the arrow" turn out to be not just poetical figures of speech, but an honest description of the landscape. 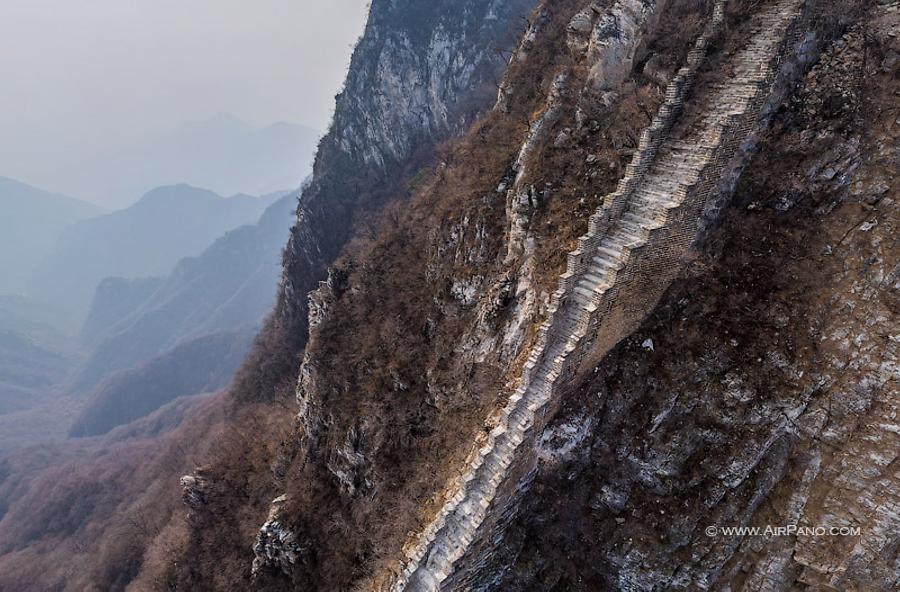 We stayed in a small mountain lounge with a poor breakfast in the morning, and started our way to the mountains in the small hours. The lane leads us through the forest with the dry leaves rustling under our feet. An hour and a half we saw the towers and the ridge. Quite soon, here it is — the Great Wall!

Between the ancient stones there are trees and bushes. This section of the wall is not recommended for tourists for visiting, many signs tell us about it. But it is the wild beauty that attracts us. We climbed the wall and created several panoramas. The sun appeared just behind the mountains. Being illuminated by the sun, the wall resembles an ancient dragon, crawling on the mountain. It is getting warmer.

Great Wall of China. Tower at the top of the Sky Stair
© AirPano

Our way goes to the tower "Beijing knot". The first impression that it is easy to get there is illusive. Having overcome prickly bushes, we appeared before the foundation of the wall that becomes the "stairs" when it goes along the ridge. At first climbing is easy, but the height of the steps is gradually getting higher and we have to bypass the rockslides. The equipment that we took with us turns even the easiest trekking into a good physical exercise. Finally, we got up there! The scene is breathtaking, from the "knot" the wall branches off in several ways; the birds fly near us yelling something approving to us. 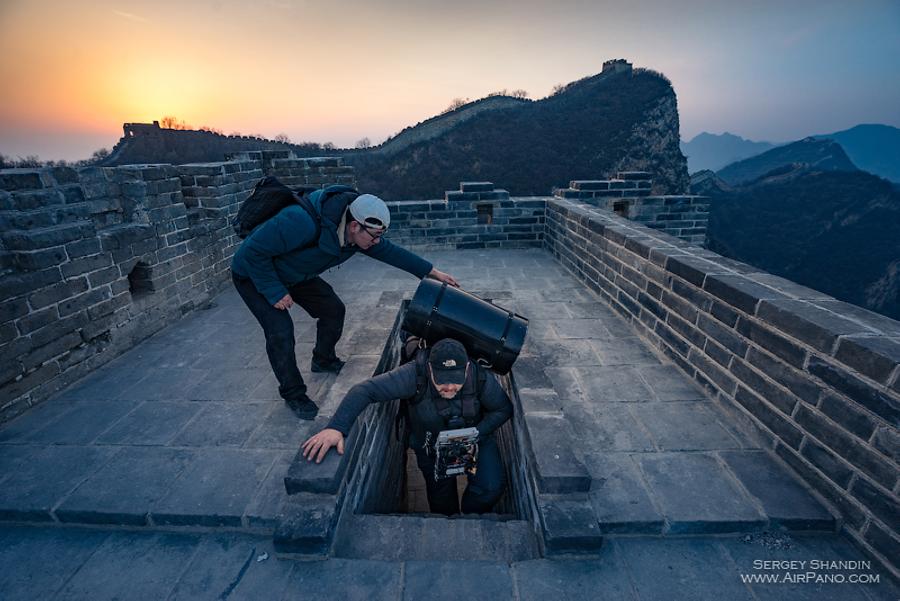 A small break with a snack, a chocolate and strange sausages — but in the mountains we cannot be choosy. Stas launches a drone and starts capturing from above. Now we decide, what we shall do next. We wanted to capture some more towers located further from here. To do that, we have to return to the valley and follow another lane, or go all the way through the wall, which is more challenging. On the map we can see numerous signs: "dangerous pass", "no pass", "better go around". Which way to choose? 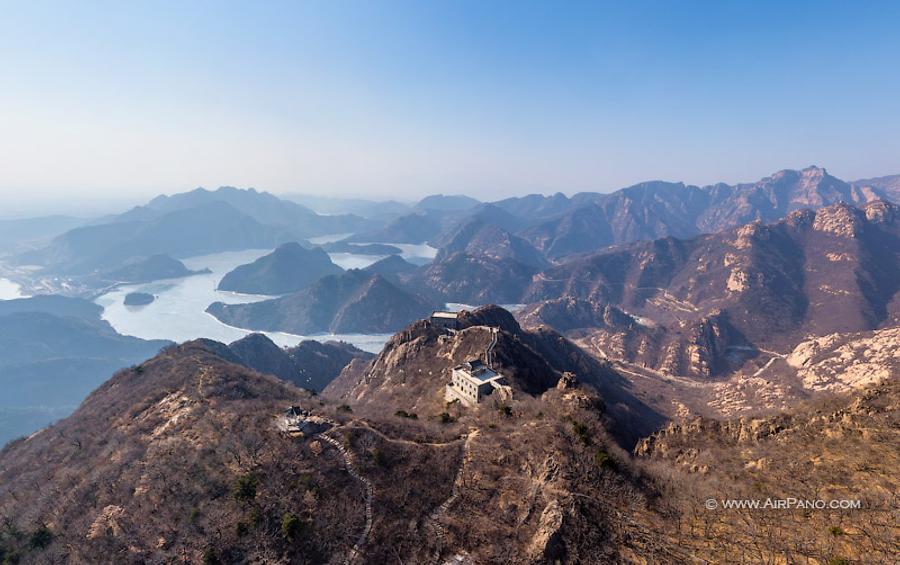 Above the temples at the Jiaoshan Wall
© AirPano

The bigger part of the adventures begins with the words "I know a shorter way". Having decided to follow the way through the wall, we did not expected that we would need to crawl: first up, then down. Have I mentioned the angle of 80 degrees? And now imagine the steps 50-80 cm high and with the width of your hand. 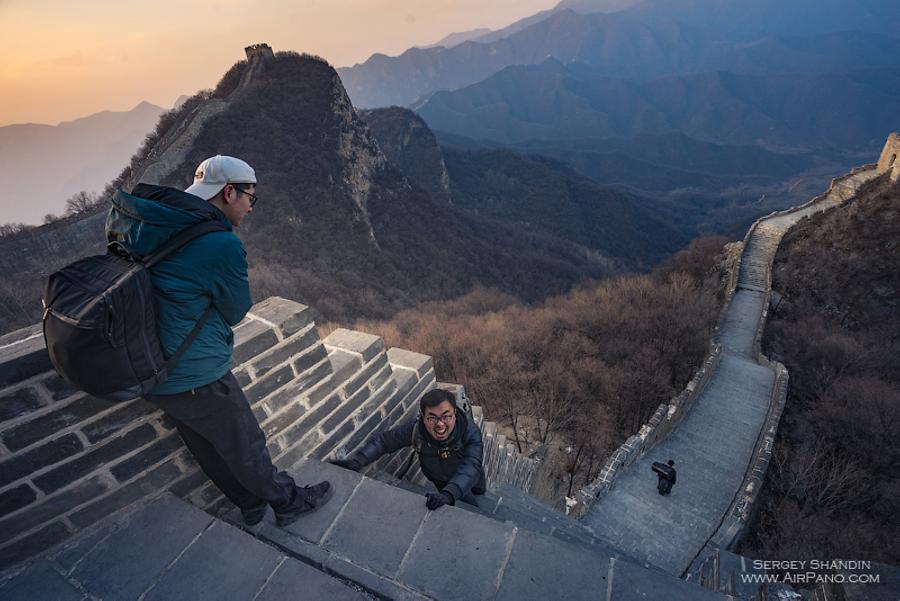 In the middle of our ascent we almost lost our enthusiasm. But there was no way to return. A breathtaking view that can be observed from the fortress "The eagle facing upwards" gave us a little more strength. The wall here is more restored, with fewer rockslides and downfalls. There is one more famous place waiting for us — "Staircase to heaven". Extreme lovers come here from the side of Jiankou. So we had to descend. But going down in the mountains is often more difficult, especially when you follow the unknown route.

Meanwhile, the sun was getting closer to horizon. To overcome the way that we went through in a daytime seemed hardly probable. The only way was to go ahead. So here it is "Staircase to heaven". Imagine that you stand on the roof of a tall building and you have to go down using narrow steps. Yes, that way down. Mountaineering equipment? No, haven't heard about that. 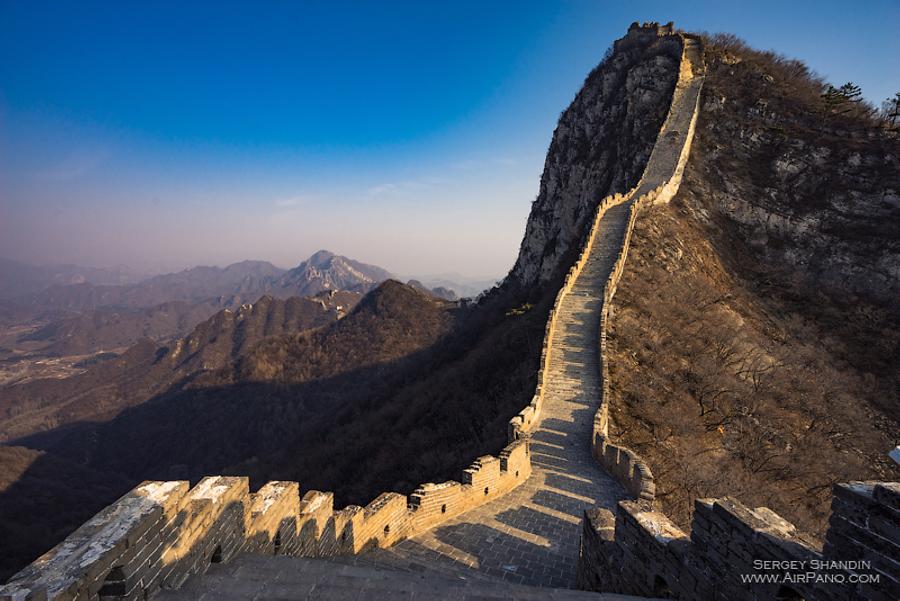 We start descending. Slowly I stretch my leg downwards trying to feel the narrow step. It must be there, I just can't see it. Then the second leg. Damn, the backpack got stuck. Once again. Now better. The next move...

It took us almost an hour to descend. It went dark, but the way through the night forest was good enough comparing to the descend through the small ancient stone steps.

It is amazing that the wall has remained intact even in the places where there was no restoration works. Legends say that the secret is the rice porridge added to the limestone mortar to fix the stones. I also wondered that the upper surface of the wall is paved. Somewhere the trees grew through the pavement, but still the condition is good. 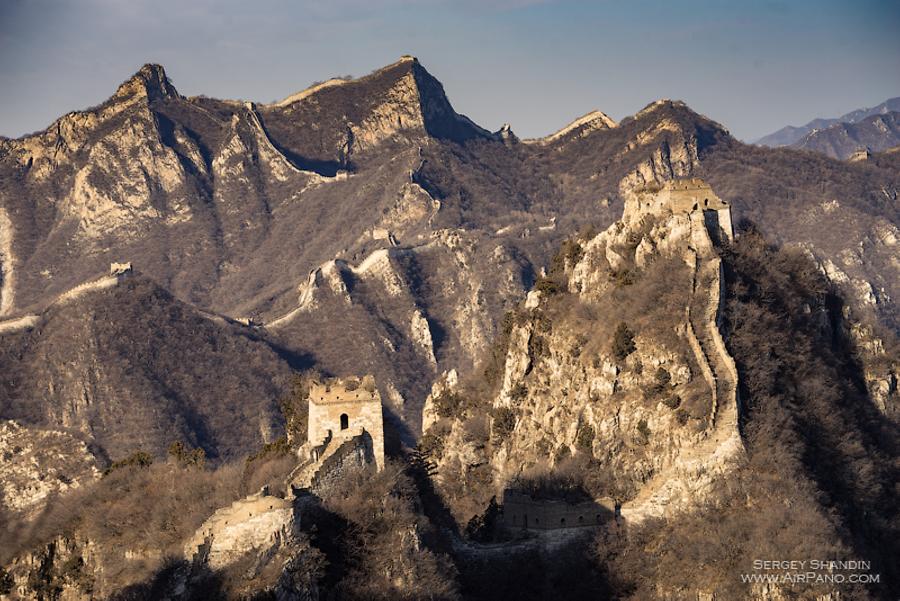 The following day we went to the wall, but this time to visit Jiankou tower. Stas was eager to repeat our heroic deed, but I suggested bypassing the most extreme part of the wall through the forest. That's how we did.

The wall with its wild beauty and grown trees is much more interesting than its "refined" parts. Unfortunately, this part of the wall will be restored soon, too. But our photos and videos will preserve it as it is today.

21 panoramas of Great Wall of China. Jiankou and Jiaoshan