by Dmitry Moiseenko, Stas Sedov, members of the AirPano Team that is a member of the global-geography Consortium.

No one knows how long it would have taken the Zhangjiajie National Forest Park to reveal its beauty to the world but for the James Cameron's Avatar. The action takes place on the imaginary planet of Pandora. Though the filming was carried out not in China, it is widely thought that the Zhangjiajie Park was the place where the famous filmmaker was inspired to create such a movie.

On the one hand, it is the oldest protected area in China (since 1982) and it is easily accessible from any large airport. But on the other hand, I could hardly find it during my trip to China if it wasn't for the growing popularity of the park and its unofficial name "Avatar Park". 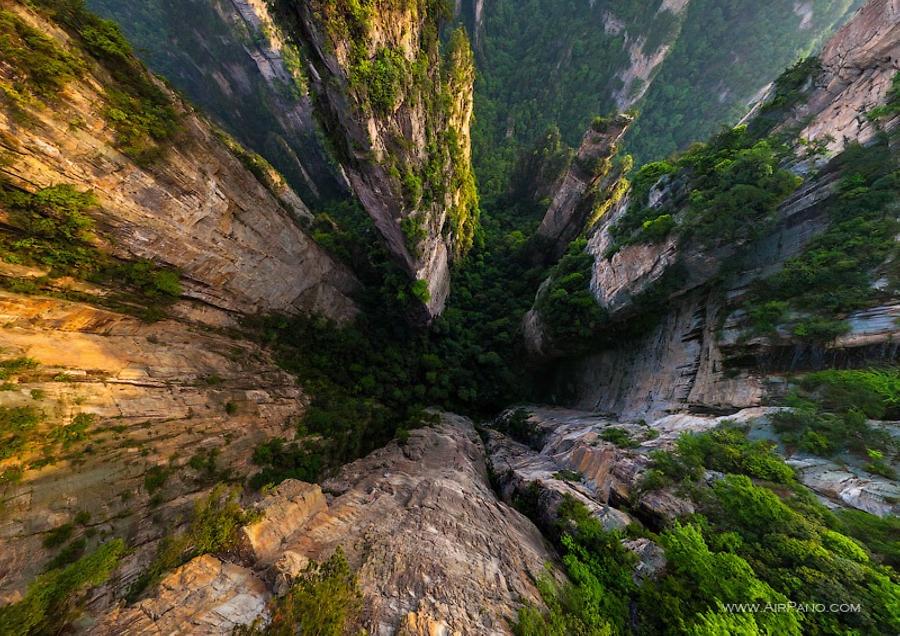 The park itself is not actually Pandora with its flying rocks, lianas, waterfalls and even dragons. But if one mentally turns the whole picture upside down, the similarity will be obvious.

Everyone who visits the park has a choice: either take a walk on the lower lanes between the 400-meters tall vertical rocky pillars gazing up at them or climb the mountain with the help of 360-meter tall Bailong elevator. You can take the bus and observe rocks from the top.

There are a lot of interesting places in the park: caves and authentic local villages. But using a drone inside the caves, even the biggest ones, turned out to be quite impractical. Thus we focused on the photographing the rocks.

The Zhangjiajie Park is a part of Wulingyuan Scenic and Historic Interest Area. It is declared a World Heritage Site by UNESCO, and the Zhangjiajie Park itself was listed as a UNESCO Global Geopark. The distances are impressive: sometimes there can be no connection between the parts of the park. But every section has its own charm: the rock pillars of different height, pagodas, pavilions, rivers, arches and bridges. Lanes lead you from the hillside downwards: it will take you quite a long time to follow such a lane. We were not able even to imagine how huge the Zhangjiajie is. We managed to visit only 30% of its territory in three days that we spent in the park. 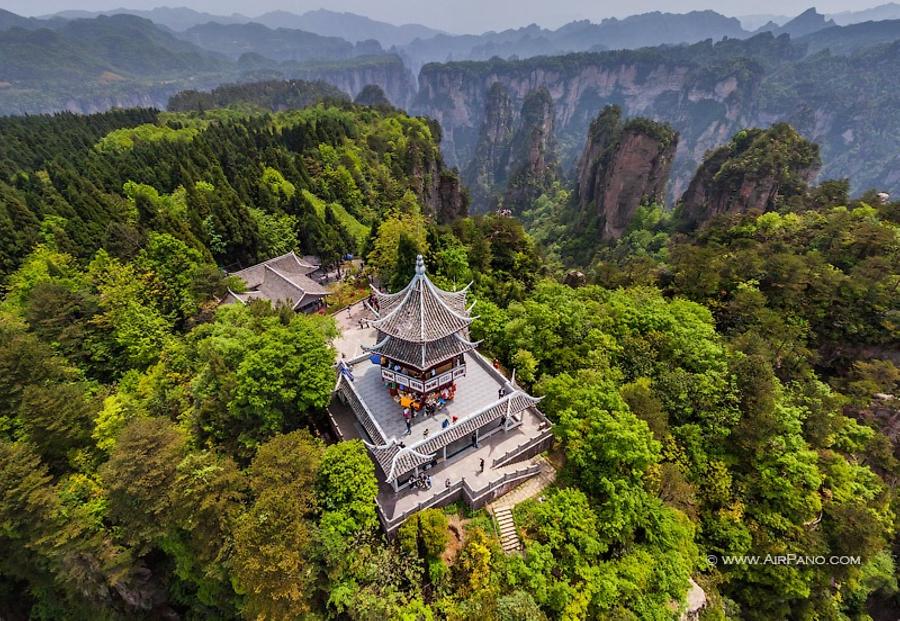 Above the Six Wonders Pavilion

Probably the most famous sight of Zhangjiajie is the mountains located in the northwest part of the park. The most magnificent views are available from the points bearing very poetic names, such as "Five beauties are departing for a trip", "The bridge between the earth and the sky" and "The charming scene".

Unfortunately, the other popular mountain — Tianmen Shan — we did not happen to visit. A cable car that leads to the top of the mountain is called "the Way to Heaven": the elevation angle of some sections of the cableway is getting 70 degrees, making the car rush straight through the clouds. The ascent of 1,519 metres (the height of the mountain) takes around 40 minutes. Due to drop of pressure, the passengers often feel their ears pop and the temperature in the cabin gets significantly lower. The way down can be made on a bus following a curvy road that counts precisely 99 turns. 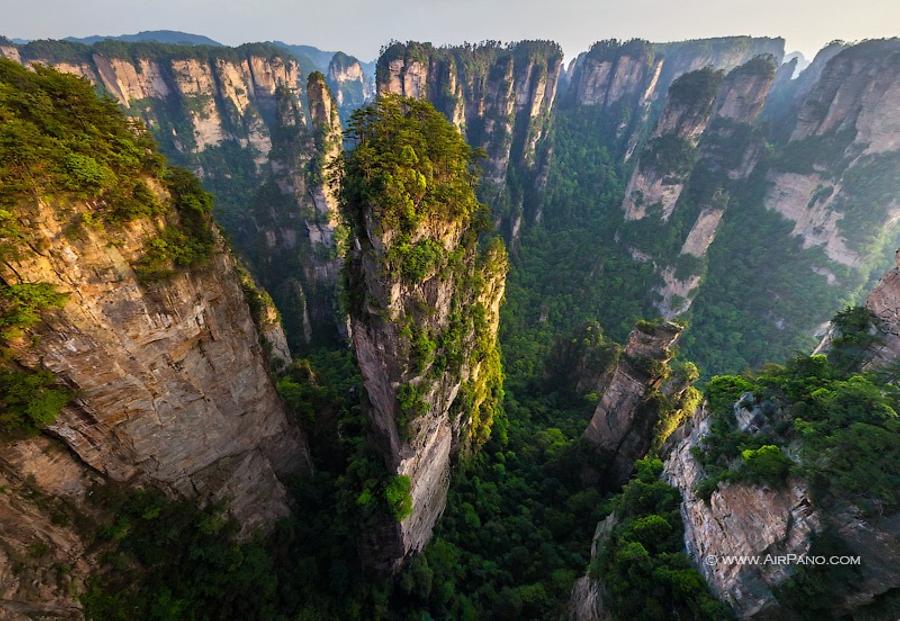 The locals believe that this mountain is somehow connected to heavens and possesses a supernatural power. In the 20th century a huge amount of water came down four times in a 1500-meters waterfall for some inexplicable reason. The water was falling for 15 minutes, then the stream suddenly ceased. There are also the rumours that some priceless treasures are kept inside the mountain. Actually, no one has ever found them, though the other indisputable treasure of the mountain is the huge cave called "the Heaven's Gate" that appeared in the year 263 due to a mountain collapse. Being 131,5 meters tall, 57 meters wide and 60 meters long, it is one of the largest caves in the world. 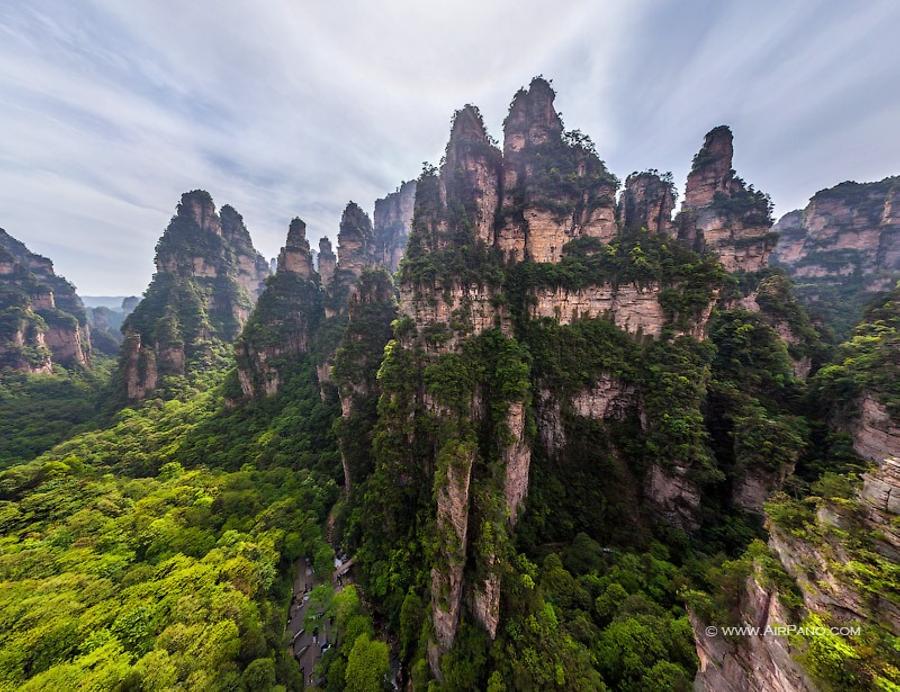 Thanks to the movie, one can have a look at Pandora from the James Cameron's point of view. But you can also have a bird's eye view of this park with the help of AirPano panoramas and make sure that the natural landscapes are as beautiful as the fantastic ones.