There is a mountain range in eastern China named Huangshan. No doubt that all the mountain landscapes in any corner of the Earth are exceptionally beautiful, but Huangshan mountains are definitely something special. This massif was formed approximately 100 million years ago in the Mesozoic Era and later gained its unique rock formations as a result of glacier activity. The peaks of the most unusual silhouettes resemble the figures of animals, birds, and even people. 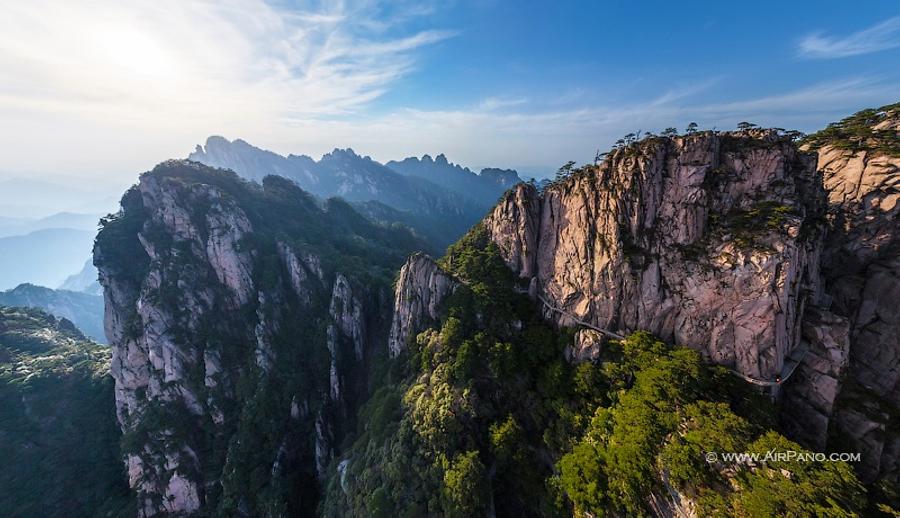 The peculiar shapes are also the feature of endemic pines of Pinus taiwanensis that cover the mountainsides of Huangshan. The pines grow only on the grounds over 800 meters above sea level. It seems that their existence within mists and endless winds is only possible in defiance of the power of nature. The length of the roots is usually several times longer than the trunk of the tree; the needles are short and sharp. The pines have a broad, flat-topped crown of curvy branches and they grow rather slow.

The most noticeable pines have got their own unique names: Pine-Pillow, Phoenix, Chessboard, Black Tiger, Sleeping Dragon... But the most famous one is Welcoming-Guests Pine with the branches growing in one direction as if the pine really welcomes the travelers.

Huangshan mountains vary greatly in shape and altitude: 77 of them are above 1,000 meters high! The mountaintops are often above clouds, so they are notable for interesting light effects known as the Sea of Clouds and Buddha's Light that occur here. 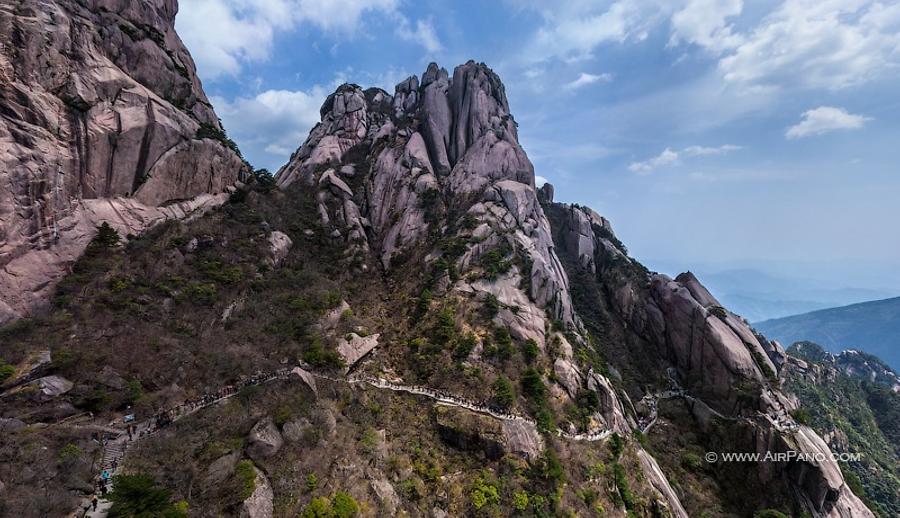 The tallest and best-known peaks are Lotus Peak (1,864 m) surrounded by clouds all year long, Bright Summit Peak (1,840 m) and Celestial Peak (literally Capital of Heaven Peak, 1,829 m). There is also a unique rock formation called Flying-Over Rock, which resembles an upside-down pear, stands vertically and makes us wonder why at all it doesn't fall. Monkey Watching the Sea is another boulder standing atop the mountain and really looking like a monkey when viewed from the right direction. The Purple Cloud Peak is famous for having multiple hot springs located at the foot of this mountain; the water stays at 42°C all the time all year long. 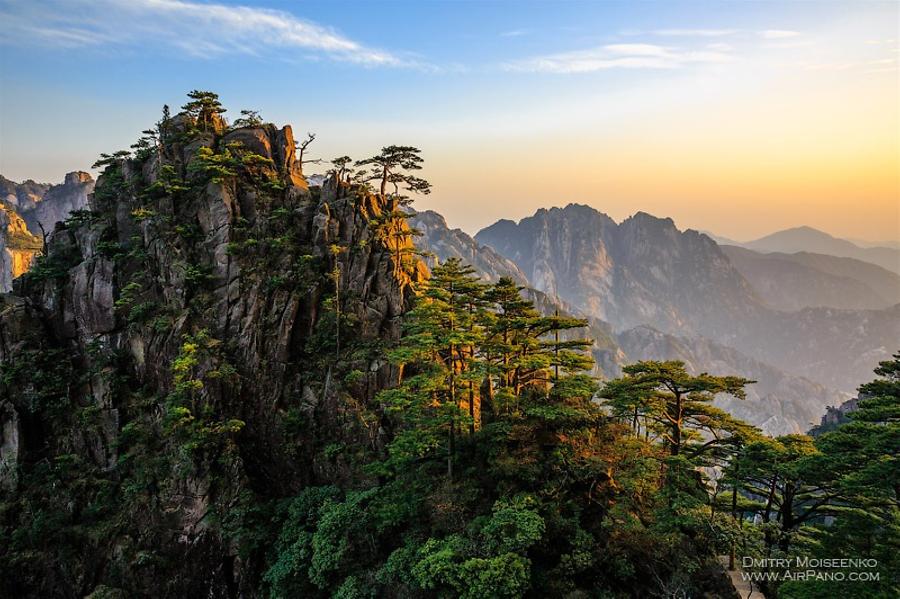 The very name "Huangshan" literary means "Yellow Mountains", but this name is relatively new. It is considered that in 747 the name of the range was changed to Huangshan in honor of Huang Di, a legendary Chinese emperor who is stated, according to legends, to have invented the Pills of Immortality in these mountains. Previously, the range was known as "Black" because of steep dark mountainsides.

In 1990 this place was named a UNESCO World Heritage Site for being a site of scenic natural beauty. Huangshan was declared a national park by the government and now is a major developed tourist destination in China. Huangshan is also known for its stone steps carved into the rocks and leading to the mountaintops, including the highest one - Lotus Peak. You can climb these steps and enjoy the view of the most unusual shapes of the mountains, clouds and incredible sunsets. But definitely, the most convenient way to have a tour to this outstanding corner of the Earth is just to open AirPano panoramas.