On the way from the romantic Bali Islands to Moscow, Dima decided to make a one-day stopover in Hong Kong. He was traveling with his girlfriend, Alina. After an enjoyable evening stroll through the city, they returned back to the hotel. As they got out of the taxi, Dima asked his girlfriend what she was dreaming of — "It would be wonderful to stay here for another week!" said Alina.

Hong Kong is known to be the city where dreams come true.

The taxi left, carrying away Dima's backpack with the telephone, credit cards and the passport on its back seat. It was Friday night, their plane was leaving on Saturday, and the Embassy was going to be opened only on Monday... This is how Dima and Alina have stayed in Hong Kong for another week.

Surveillance video cameras at the hotel's entrance captured the license plate of the taxi, but the backpack was no longer there. The driver said that he didn't see anything and that the next passengers must have taken the backpack.

While a friend from Moscow was sending his new foreign passport to Hong Kong, Dima had a lot of spare time. He shot these panoramic photos when the sky was especially beautiful, decorated with magnificent clouds. 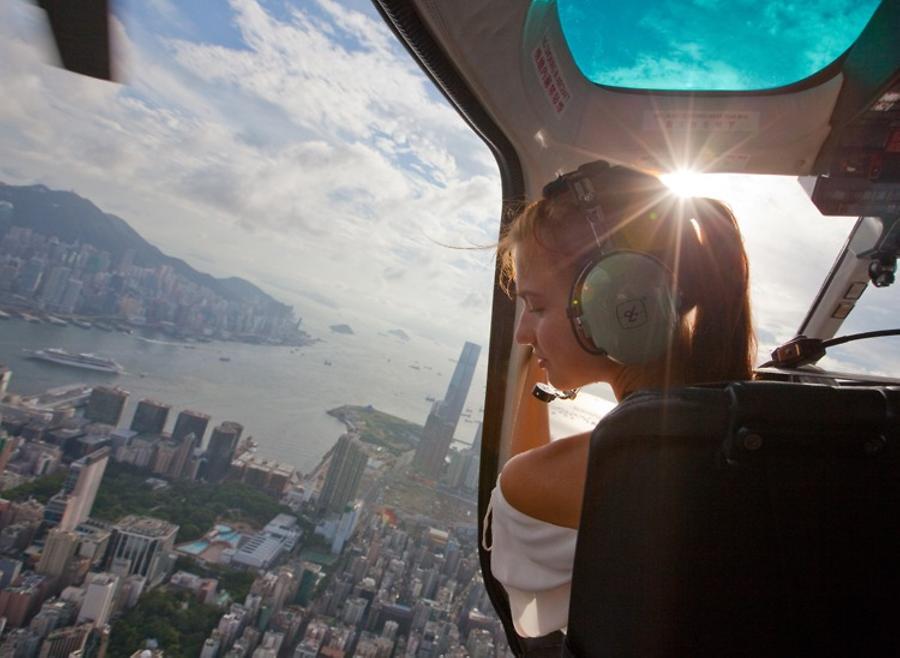 Alina's wish helped to stay in Hong Kong for another week

Actually, I also wanted Dima to stay in Hong Kong and shoot the panoramas. And as we know, Hong Kong is the city where dreams come true...

Hong Kong is both a city and a state, and (more precisely), a special administrative area of the People's Republic of China. It is truly "special" in all regards.

Hong Kong is one of the worldwide financial centers, and this mere fact places certain obligations on its residents and determines the city's architectural appearance (the first skyscrapers in China were built here). Additionally, a special administrative status allows Hong Kong to have its own laws, and it takes full advantage of those.

For example, the notorious one-child Chinese birth restriction policy does not apply to Hong Kong: its citizens may have as many children as they like. Frequently, Hong Kong residents do not think of themselves as Chinese. They speak fluent English, which is the second national language here. Those who were born prior to 1997 have "open passports", which means they can travel without a visa to the countries that otherwise require an entrance visa from Chinese citizens.

So, where does "prior to 1997" come from? It is the year when the former British colony became a part of China. Prior to that, Britain has leased this land from China for 99 years, developing it and spreading its culture. Nevertheless, this lease agreement was not renewed upon expiration.

Rumors say that the British were unable to keep their overseas territory because Hong Kong does not have drinking water sources of their own. Historically, drinking water was delivered to the islands from the Chinese mainland, which imposed a strict condition — a renewal of lease agreement would bring the water supply to an end. As a compromise, Hong Kong was promised a full autonomy and preservation of their lifestyle. Nowadays, Hong Kong is an incredible mix of all achievements of the West with unique appearance of the East.

Charming colonial-style mansions co-exist in harmony with high-rise buildings erected due to the limited territory. Architects of Hong Kong are guided by modern technical knowledge, and at the same time they follow Feng Shui tradition. Hence, many buildings have mirror tiles on their front side to prevent evil spirits from getting inside. The corners of buildings can be slanted or rounded — it is a Feng Shui symbol of friendship and protection from all negative influence.

The name of the city, "Hong Kong" is translated as "fragrant harbor". Thus, water and plants become an equally important part of the local landscape. Actually, there is a lot of greenery around: both in the city, and in the famous Victoria Park — home of the Victoria Peak, the highest (552 meters) point of the Hong Kong Island.

By the way, Hong Kong has a total of 262 islands in the South China Sea, most of which are really small. The largest island of the archipelago is the Lantau Island, famous for its airport, Disneyland and the gigantic Buddha statue. Curiously enough, fairly small territory of Hong Kong has over 600 shrines that are spread all over the islands.

"The Hong Kong Skyscrapers" and "The Hong Kong Lights" are the two names of the second-largest Island. It is this very island that you can see on this panoramic photo.

8 Panoramas of Hong Kong - the City Where Dreams Come True