by Stanislav Sedov and Dmitry Moiseenko members of the AirPano Team that is a member of the global-geography Consortium.

We also want to thank Yuri Pustovoi for provided photographs.

Guilin is one of the most interesting cities in China. It is famous for its wonderful natural monuments and situated on the bank of Lijiang river in the Southern Guangxi Zhuang Autonomous Region. Guilin's beauty inspired people to give very poetic names to some of the local places of interest, such as Seven Stars Park, Reed Flute Cave, Folded Brocade Hill, and Green Lotus Peak. These are just a few of Guilin's sights.

Guilin's history dates back more than 2000 years ago and it's a city where natural monuments intertwine with man-made structures. In the center of Guilin there is a 152-meter high Solitary Beauty Peak (Duxiu Feng) with 300 steps leading to its summit. There are also ruins of a royal complex that dates back to Ming dynasty and further to the south there is Elephant Trunk Hill, that got its name due to its resemblance to an elephant that drinks water.

The Sun and Moon Pagodas, city of Guilin

Lijiang river flowing through the city is very pure and transparent. In the middle of the river stands Wave Subduing Hill (Fubo Shan) with a Buddhist temple at the top. It houses unique objects, such as a 2.5 ton bell and a kettle which can be used to cook food for one thousand people.

Night view to the pagodas of Sun and Moon

Guilin's name is translated from Chinese as "Cassia Tree Forest". Its limestone pillars look like a giant stone forest.

Long time ago limestone stratum that makes up the hills was accumulated at the bottom of the ancient sea. Several millions of years later this part of Earth's crust went up due to large earthquakes. Subsequently heavy showers and snow befell on this region, eroding the bedrock that was already weakened by cracks and ruptures. Later the upper limestone stratum fell off, exposing spired limestone trunks, which are considered by modern scientists as exemplary ancient karstic rocks. Nowadays limestone pillars of China's mountains are stretched from the South Central China to the northern parts of Vietnam. Cliffs, which sometimes can rise 100 meters above their base, stand almost vertically and pressed against each other. You can see Guilin's austere ridge tops for kilometers and kilometers away. 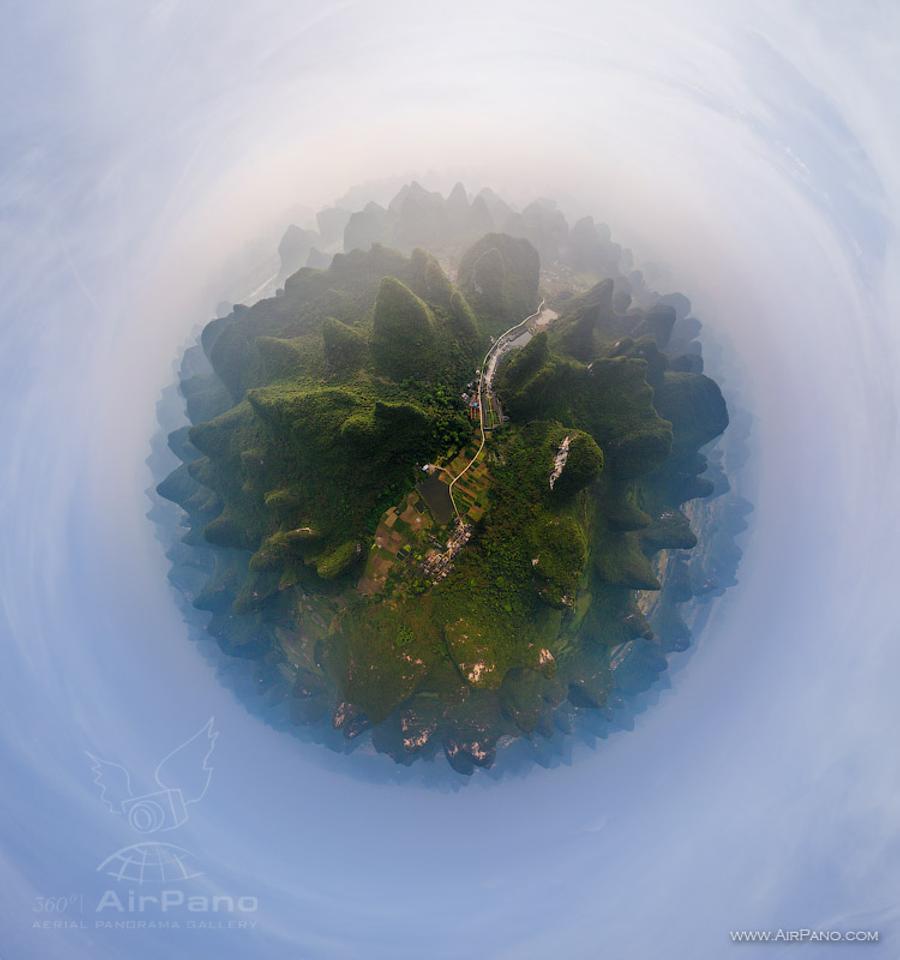 You can assume that nothing can grow on a bald cliff. But Guilin's mountains are the most picturesque mountains in the world. The whole mountain ridge is covered with vines and small trees clinging to rocky slopes. During orchid blooming season you can see a variety of multicolored flower islands light up on the slopes. Hazy mountains and still waters of Li River have a magical aura that inspired painters and poets throughout centuries.

Guilin's unusual, and, in the literal sense of the word, unearthly landscape was chosen as one of the shooting areas for Star Wars. Episode III. Revenge of the Sith.

And now let me turn the floor over to Satislav Sedov, who will share some of his impressions about the trip.

We had to face our first serious challenge even before we arrived to Guilin. The fact is that new air transportation rules stipulate that you can't transport lithium batteries in the luggage. After we checked-in they put our suitcases through an X-ray machine and asked us to take out the batteries. Dima and I gathered all our batteries, put them in one bag, and went to get through the security screening. As expected, there were some complications during the screening: according to new rules you can't transport even one battery of such capacity, and we had 16 of them in our bag.

Katerina, our guide, switched on her "I can persuade anyone" mode, I took out my phone with new panoramic photos of China and, somehow, we managed to convince the security guys to let us on the plane with our batteries. Katya asked me to pack everything quickly before someone from the upper management saw our "goods". 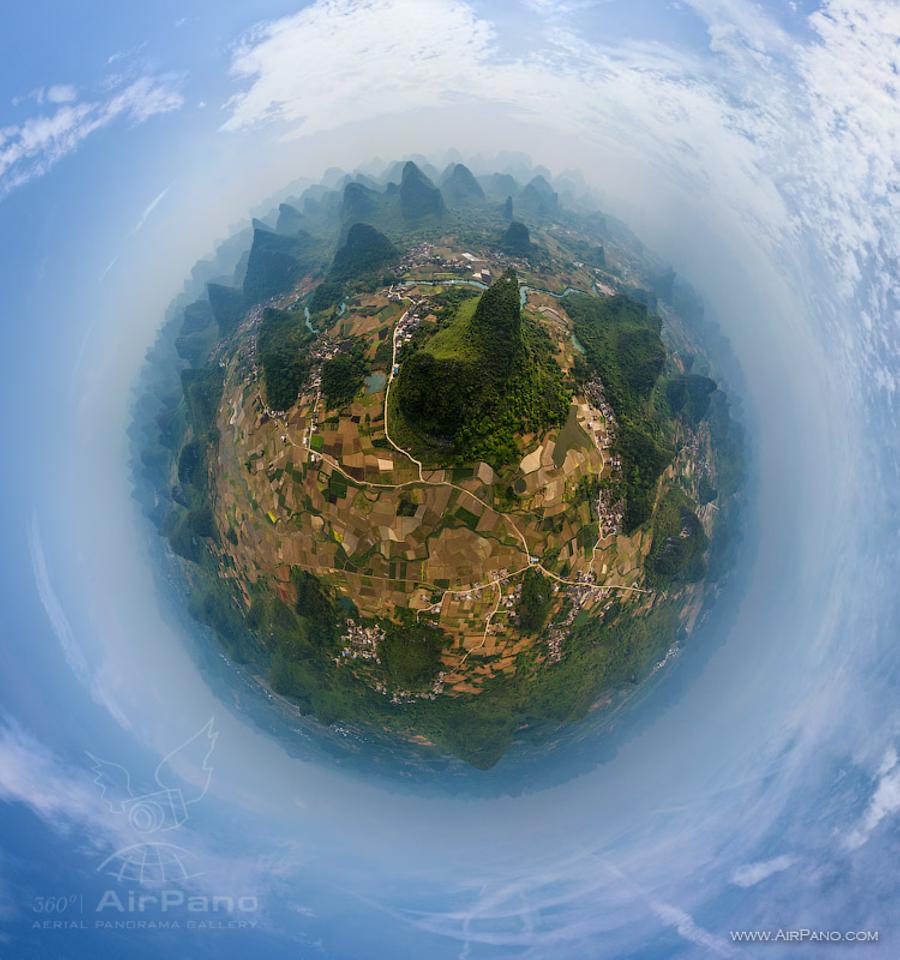 Having assembled the helicopter on the move, we decided to take some mountain pictures right on the road. As a result we have very interesting "hedgehogs" on our photos. During these test launches in Guilin, Dima and I realized that we would have to take pictures from a very high altitude, because low altitude photos couldn't show all the beauty around us. 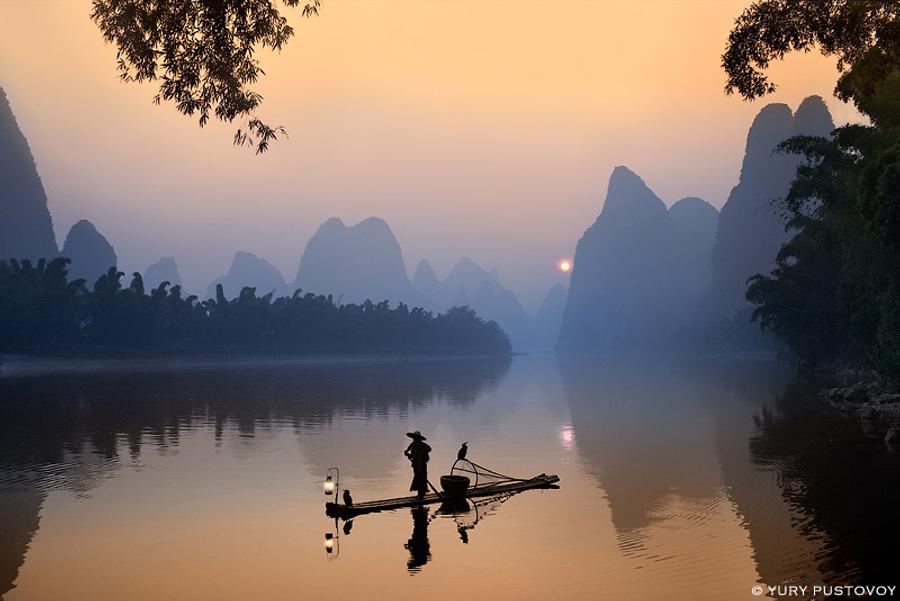 Bamboo raft on the Li River

The next day we arrived to the boat station. And there we almost fell victim to an old tradition of screwing over Caucasian tourists to pay double for outgoing boat freight. Our driver, a local girl, suggested that we take her friends' boat, which was cheaper, and something unimaginable happened after that. An old lady who worked as a boat rental agent suddenly stopped being all nice and turned into an old hag: she started spouting bitter curses against the girl, and it seemed like she was about to clutch at her face. Such intrusive service made us really uncomfortable, so we decided to go along with girl's suggestion and hire her friends; at the end of her performance, the old hag shouted out some ridiculous price with zero profit to her business. Apparently out of principle. 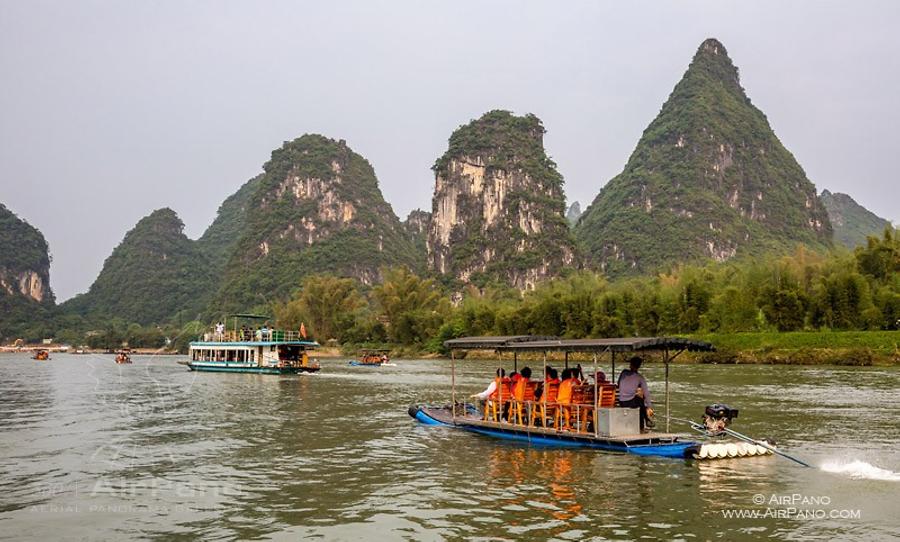 Guilin mountains, on the Li river

Later that day we were on a boat, sailing up the river. I should tell a few words about those boats. The vessel is made of strapped sewer pipes of large diameter with both ends curved slightly upwards. In the middle there is a shed with shade for passengers. In the stern there is a motor unit: a mower engine with a long shaft and a propeller on the end.

The vibrations and noise the vessel produced while moving was very high, while the speed could be compared to a snail's pace. These boats seemed like they would do quite well for our purposes, because the bow had enough space for launching and landing our helicopter. 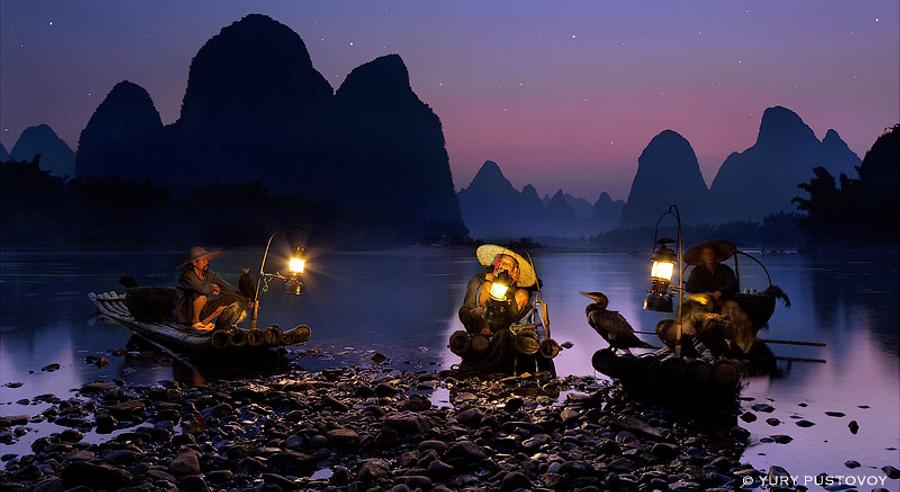 Fishermen on the Li river

Sailing slowly up the river, we pulled in to the shore at several key locations. Chinese gave each mountain a name, which, more or less, reflected their shape. Sometimes, when we couldn't reach the land, we launched the helicopter right from the boat. Our equipment worked like a clock, and thanks to that I had an opportunity to beat my own record at high altitude flying with camera several times. I reached the mark of 524 meters. We decided not to go higher, because the haze in the valley started to conceal the landscape's details.

Mountains near the Yangshuo city

We finished shooting Guilin in the province capital under the same name. There are two pagodas in the center of the city, they are symbols of this place: The Sun Pagoda and the Moon Pagoda. There is a bridge leading to one of them, and an underground tunnel leading to the other. Unfortunately, we couldn't shoot the tunnel from our helicopter, but you can see pagodas in a very good detail.