by Dmitry Moiseenko and Stanislav Sedov members of the AirPano Team that is a member of the global-geography Consortium.

My first impression of the nearest section of the Great Wall to the Bejing was disappointing. I cannot say if it was because of the drizzling rain, a massive tour bus parking lot down below, or poor steps collapsing from countless waves of tourists. Clearly those steps were laid by modern builders, and not by ancient craftsmen. Although the weather cleared the next day, it didn't improve my mood, because crowds of tourists flooded the Wall. We made several flights, caught attention of hundreds of surprised visitors, and left the "tourist paradise" as quickly as possible. 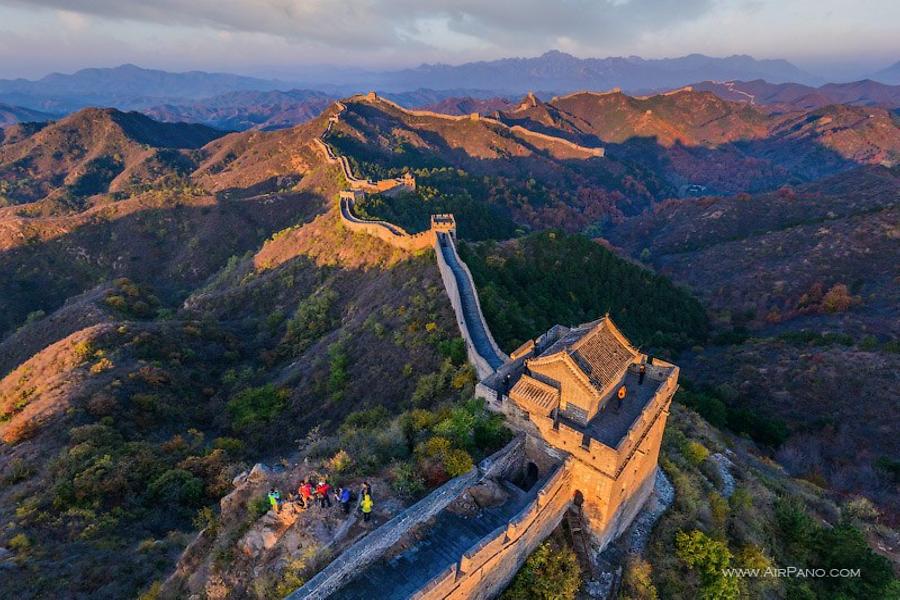 A friend of our interpreter Elena suggested an interesting section of the Wall few tens of kilometers to the East — Huanghuacheng. According to him, a man-made lake flooded part of the Wall in this region. This is where we arrived by the end of the day. Despite of the rather strong wind, we managed to make a couple of flights over the lake bathing in rays of the evening sun.

Later at night, while going through our footage, I finally realized what a World Wonder we are about to photograph. On our panoramas the Wall stretched from horizon to horizon, rolling down into chasms then climbing up to crests of surrounding mountains. It is so beautiful and inexplicable...one wonders how people managed to build such a monumental structure. 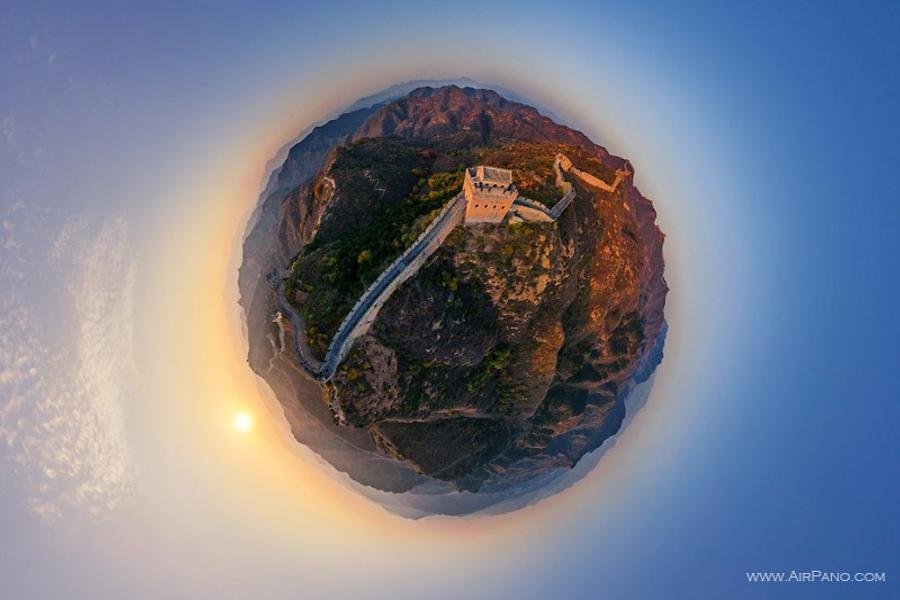 We spent the following day in attempts to climb up the section of the Wall located West of the lake. It was closed for tourists, because this part underwent restoration just recently. Finally we found a ladder left by construction workers, and used it to get to the top through one of neglected watchtowers. To tell you the truth, the restored section of the Wall doesn't make such an impact as it lacks the ancient spirit. A bit later, when we reached the top of the hill, we saw the old section of the Wall: there were no restored handrails, and grass was growing between stones. In my opinion, these passes of the Wall look much more interesting, although they are less suitable for tourist masses. Perhaps this is why Chinese gradually cleaned up and "civilized" this place. 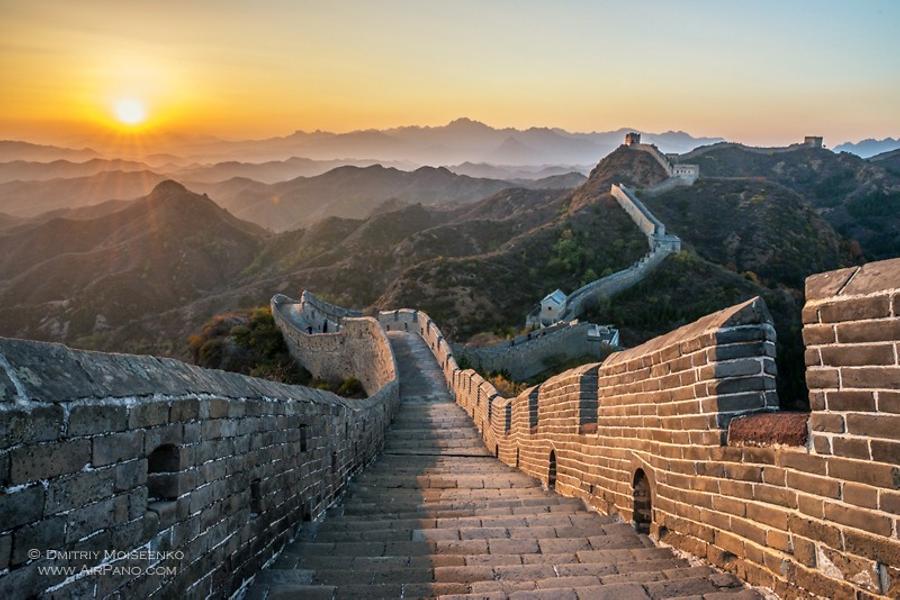 Few days later, at the different pass of the Wall — Mutianyu, we met a girl from Ukraine. What a brave person! Irina was traveling solo, speaking no Chinese. She managed to get to China by hitchhiking through Ukraine, Russia, and Kazakhstan. Once in China, Irina decided to dedicate several days of her trip to the Great Wall. On her photographs we saw a completely different Wall: thick shrubs, crumbling steps, and areas so steep that one would have to crawl there instead of walking. Amazing, how such a petit fragile girl managed to concur these obstacles alone, sleeping in ruins of old watchtowers, freezing at night, and suffering from thirst during afternoon heat.

We wished Irina good luck, and focused on finding "the other Wall". Our quest led us to two locations of magical beauty: Jinshanling and Gubeikou.

Controversial beauty of Jinshanling originates from several factors. Although restoration efforts and civilization has already reached this pass of the Wall (there were few maintained paths and a zip-line), it has not been restored completely. A lot of watchtowers and parts of the Wall remain untouched. The second factor is the unique landscape: the Wall follows picturesque lines of the mountains making this place a true paradise for professional photographers. If you look at a postcard with the Great Wall of China, chances are that it was shot in Jinshanling. 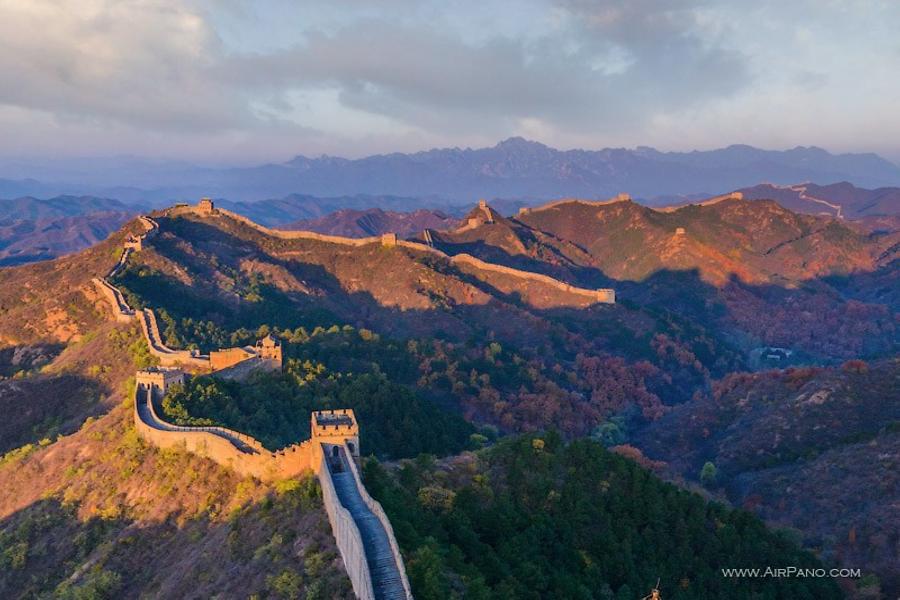 When we came to Gubeikou pass of the Wall, located near Jinshanling, I had an impression that restoration crews have not set their foot here yet. Only strips of metal hugged tops of few watchtowers slowing down the decay, and lightning rods appeared here and there reducing risk of a lightning damage.

In my opinion, this is the most meditative pass of the Great Wall. Distance and time flow differently here. Not like in the outside world. There is no rush, not fluster. It seems like you walk rather slowly, but kilometers keep passing by. You don't get tired because there are almost no steps. You keep on walking along the grassy trail, along half-broken sections of the Wall, where you can see the finest details of the Wall's structure. One watchtower, then another, and another... It is very difficult to stop. At some point we realize that all we want is to keep on walking further and further, without stopping. But the sun is going down, and it is time to return to a village where we left our car with a driver. 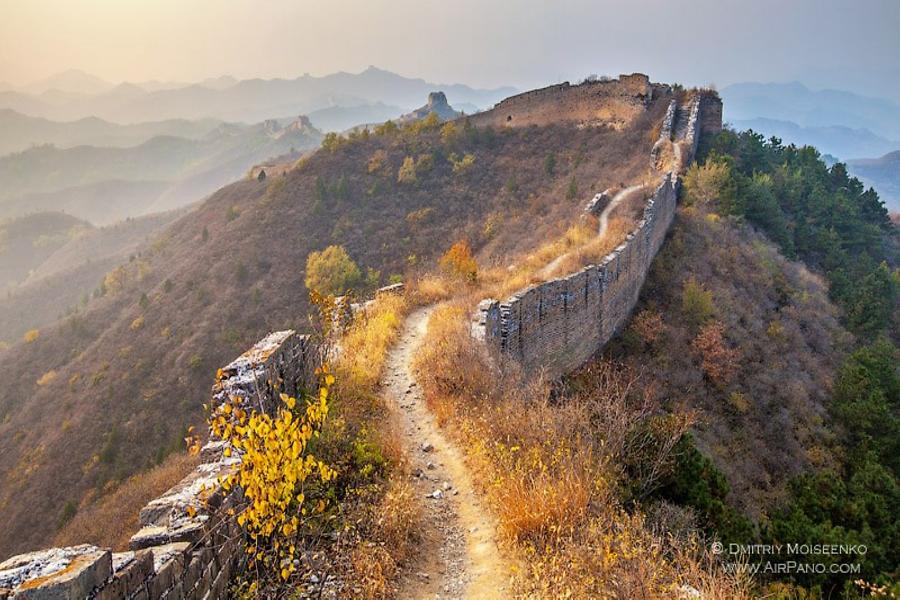 Ancient part of the wall

We had our share of luck on this trip as well. One day we left Beijing to shoot Badaling, one of the most visited sections of the Great Wall. I expected nothing special from this photo shoot, but I was still very disappointed when it turned out that we mistakenly came to the wrong spot. The sunset was supposed to be shot from the opposite slope of the mountain, and there was no way to get there in time. The sun set over the horizon and we went to one of the local restaurants. After dinner we stepped outside and were surprised by the glorious look of the Wall in its holiday illumination! Apparently they turn on night illumination only during holidays. However, tonight was a special occasion — a VIP guest arrived to the Wall and the lights were turned on especially for him. Naturally, we decided to fly! I must give credit to the local security guards — they kept the lights on even after VIP guest departed, giving us a chance to finish our photo shoot. 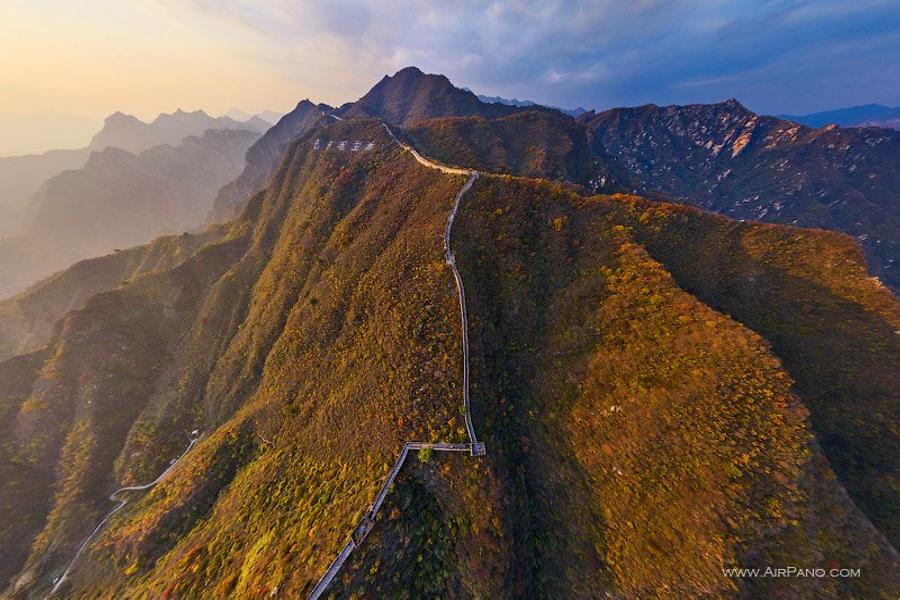 We spent last day of our Chinese trip in our favorite Jinshanling. I left my helicopter in the car because of the non-flying weather. Dima shot panoramas and I wondered around looking for interesting Instagram angles. We went into the main watchtower, which was closed off last time for a film crew. Near the tower we found a little shop with photographs and coffee. Flipping through pages of a book I looked at the seller and realized to my surprise that in front of me was Zhou Wanping, the author. Mr Zhou, a self-taught photographer, lives in a nearby village. His photographs of the Wall in different seasons won numerous awards in international photo contests and made him famous. We admired winter views of the Wall, received an autograph from the author, and slowly went towards the park exit. 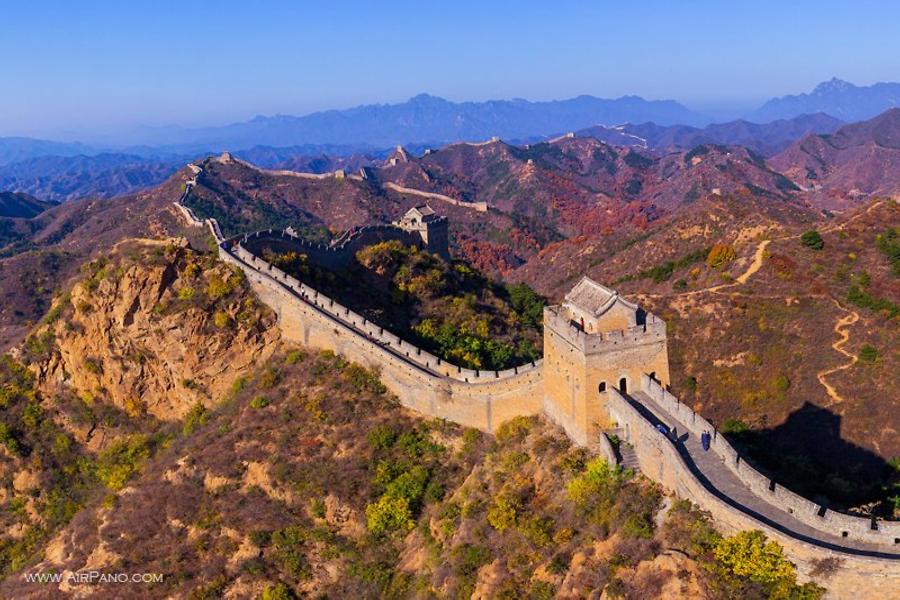 Although during our first day of the photo trip I couldn't even imagine it, on my way back to the car I caught myself thinking that I didn't want to leave, and that perhaps I would return here again...

And now a few facts about Great Wall of China.

Its construction began in the 3rd century BC. After the unification of China Emperor Qin Shihuang ordered to build a solid wall to cover the north-western border of the empire from the attacks of nomadic people. 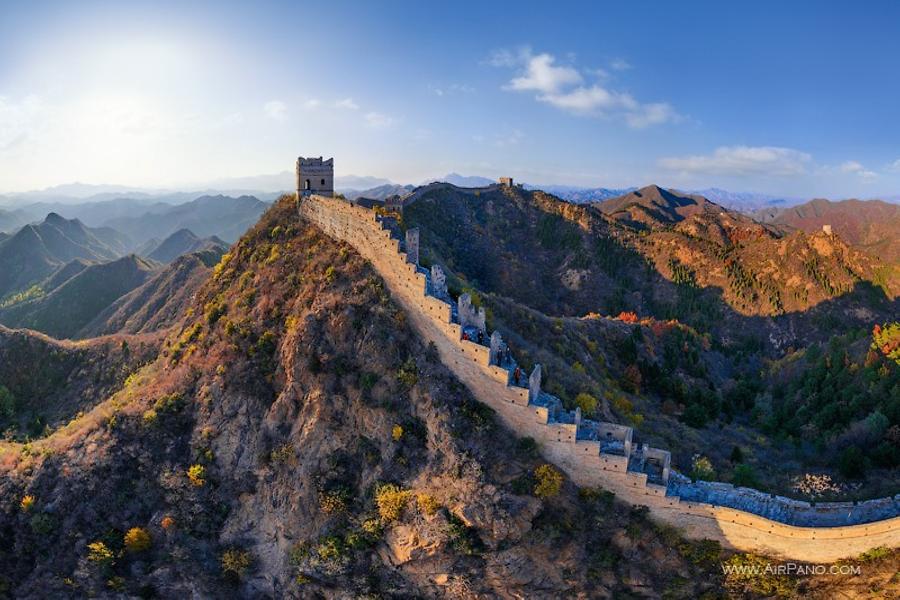 The construction of the wall was very challenging. The main problem was the lack of appropriate infrastructure: there were no roads and not enough water or food for a 300,000 army of workers, not to mention that it was extremely difficult to build such a big construction on the given terrain.

According to the plan the wall was supposed to run along the mountain chain, rounding all the spurs and covering high rises and deep gorges. This feature, along with its length, is what makes the Great Wall of China unique: it seamlessly blends in with the landscape. 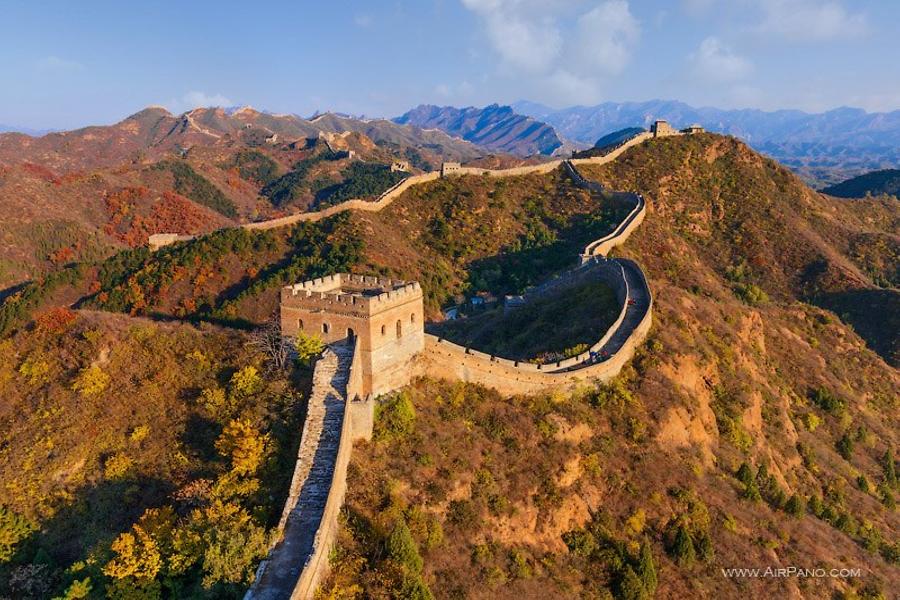 The first sections of the wall were made from mud; later it was replaced by stone slabs laid on top of each other on the layers of soil. In order to bind these parts, as well as to control the growth of weeds in the joints of plates, the Chinese invented a unique sealer: a mixture of thick and sticky rice porridge with hydrated lime. However, this innovative technology was a subject to criticism in southern China, where entire crop of rice was exported by the order of the Emperor.

During its long history the wall repeatedly changed its appearance: some parts were destroyed, while others were rebuilt from scratch. If we ask about the length, the usual answer will be that the total length of the Great Wall of China with all of its branches is 8,850 km. So this landmark of China is made up of 6,259 km of an actual wall, 359 km of trenches, and 2,232 km of natural protective barriers such as hills and rivers. Meanwhile, archaeological survey concluded that the wall used to be much longer — 21,196 km. 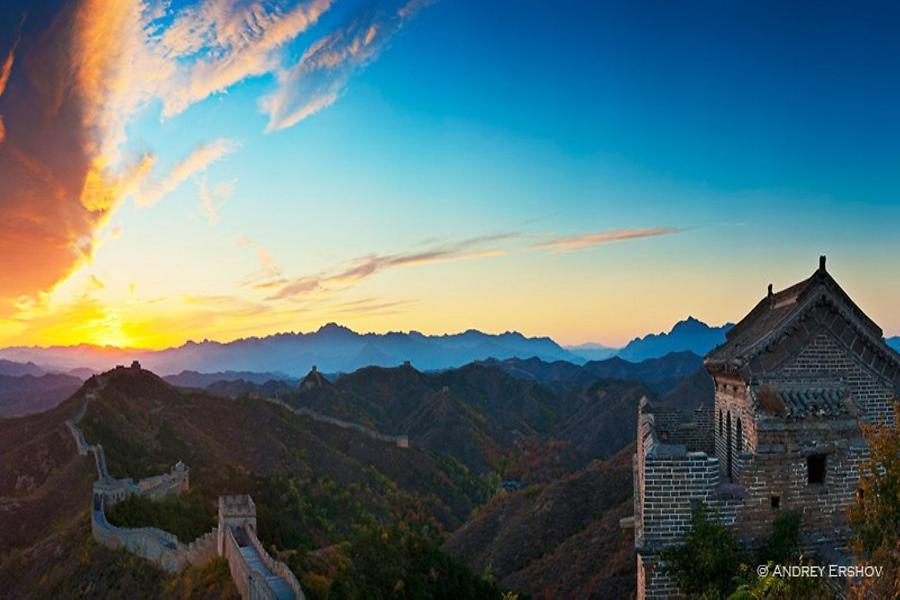 The average height of the Great Wall of China is 6.6 m, although some parts are lower or higher, reaching up to 10 meters high. Throughout the wall you can see protective vaults and guard towers, as well as fortresses at the main mountain passes.

In 1987 the Great Wall was listed as a UNESCO World Heritage Site, and in July of 2007 it was listed as one of the new Wonders of the World. Over the past decade the monument was seriously damaged: some of its parts were destroyed to make way for the road construction and other buildings. Some destruction was caused by the weather conditions (heavy rains and sandstorms) and by other factors.

There were some cases of unfortunate mix ups: several generations of local farmers from Suizhong County have been building their homes using stones found in the mountains. And only recently it was discovered they were using stones from the legendary monument. And this remained unknown by local authorities and archaeologists. 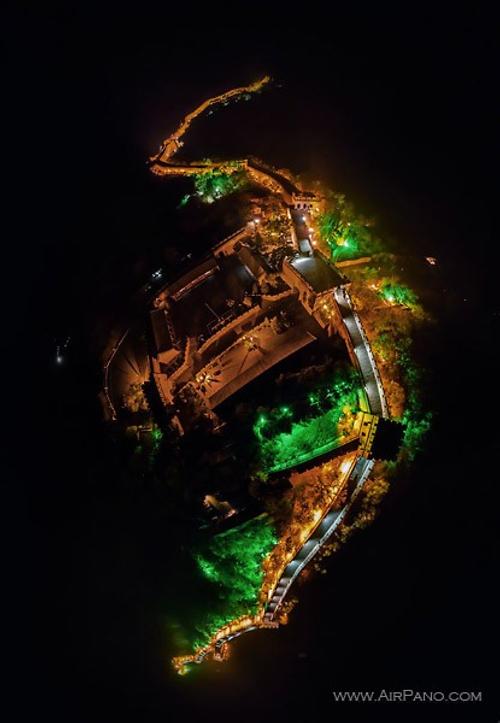 Badaling Great Wall in the night

It is believed that the Great Wall of China can be seen from the moon or at least from the low earth orbit. Both of these statements are unsubstantiated: even Chinese astronaut wasn't able to see the largest monument of China; in its attempt to prove the wall's visibility from space, the European Space Agency published a certain photograph only to embarrass itself: the picture showed one of the rivers.

We take our panoramas way below Earth orbit, which will allow you to admire the Great Wall of China in all its glory.

19 Panoramas of Great Wall of China