Photos and text by Sergey Semenov and Stanislav Sedov, members of the AirPano Team that is a member of the global-geography Consortium.

The natural habitat of the giant panda (lat. Ailuropoda melanoleuca) is only a few mountain ranges in central China. For quite a long time the species had been considered "endangered": by the year 1976 poaching and deforestation had resulted in leaving only around 1,000 animals in the wild.

As soon as the authorities of China got the understanding of the problem, a range of measures was accepted: namely, more than 60 parks with a higher level of protection were created. As a result, by 2016 the number of pandas had increased to 1,864, and more than two-thirds of them live on secure territories. The total number of giant pandas in the world, including those living in zoos, is around 2,060. 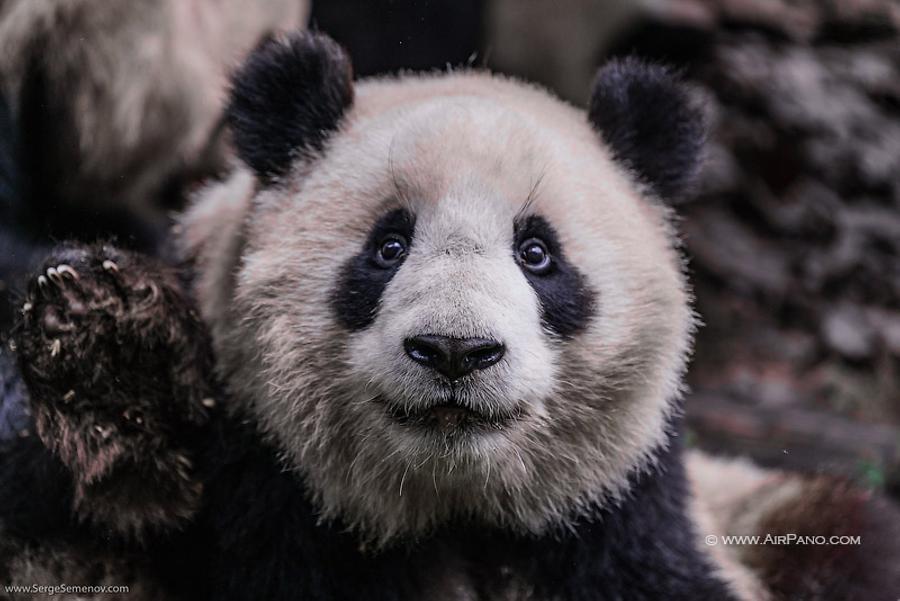 Still being limited in numbers, they stopped being endangered and were reclassified to vulnerable. Many research and breeding centres played an important role in the process of protecting these animals. AirPano team has visited one of these places: Chengdu. According to the ancient chronicles, pandas have been living in the local forests for more than 4,000 years.

The city of Chengdu is located in Sichuan Province in south-west China and has the ancient history together with fascinating monuments. But in the first place, it attracts visitors with the unique opportunity of watching black and white bears. The images of these animals remind you about this opportunity as soon as you arrive at the airport. 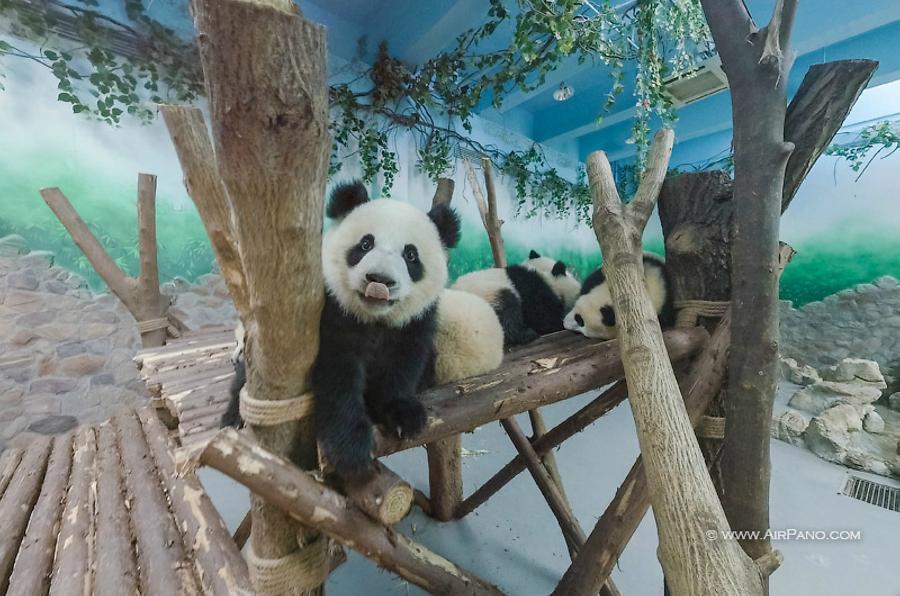 Chengdu Research Base of Giant Panda Breeding has started its work in 1987 and is situated on the outskirts of Chengdu. The first inhabitants of the Base were six panda bears that were rescued from the dangerous conditions of the wild nature. For 30 years of work, 176 bamboo bears were born here and around a hundred adult animals now live in the base.

The facility is open for visitors: it helps to gain additional funds to support the work of the centre. In addition to paying the entrance fee, one can make a donation to the panda protection fund. As a souvenir tourists will get a t-shirt, a soft toy and a sponsor certificate. 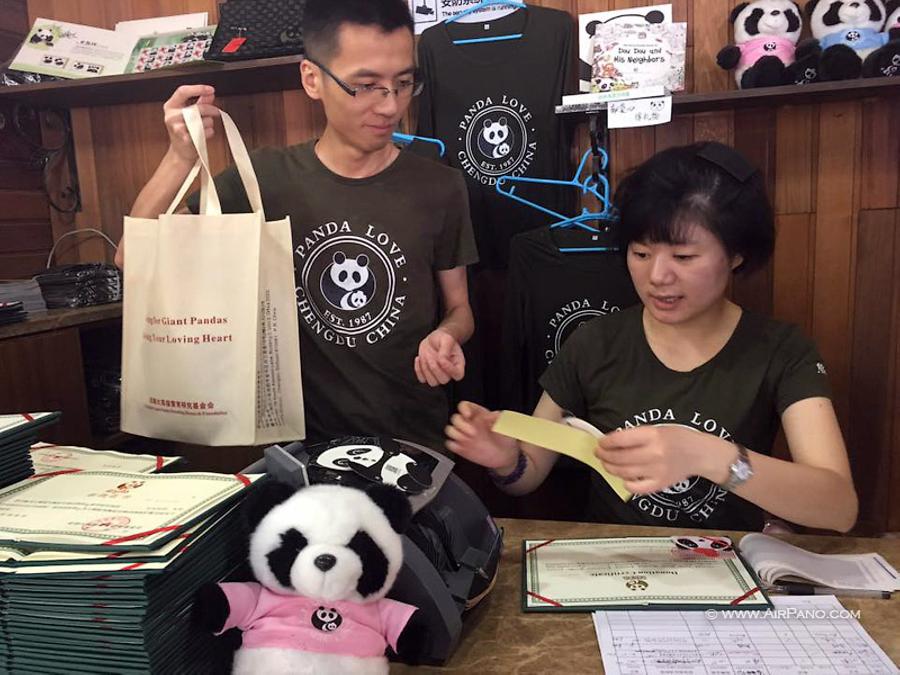 The territory of the park is divided into several zones: museums, info points, the rehabilitation facility for hurt pandas and enclosures for pandas of different ages. And it is a facility for not only giant pandas, Panda Base is a home for red pandas or as they are also called lesser pandas (lat. Ailurus fulgens). Many people don't know that these animals are the real representatives of the Ailuridae family, while giant pandas belong to the Ursidae family. However, both these species have a common ancestor and inhabit similar high mountain forest area in China. 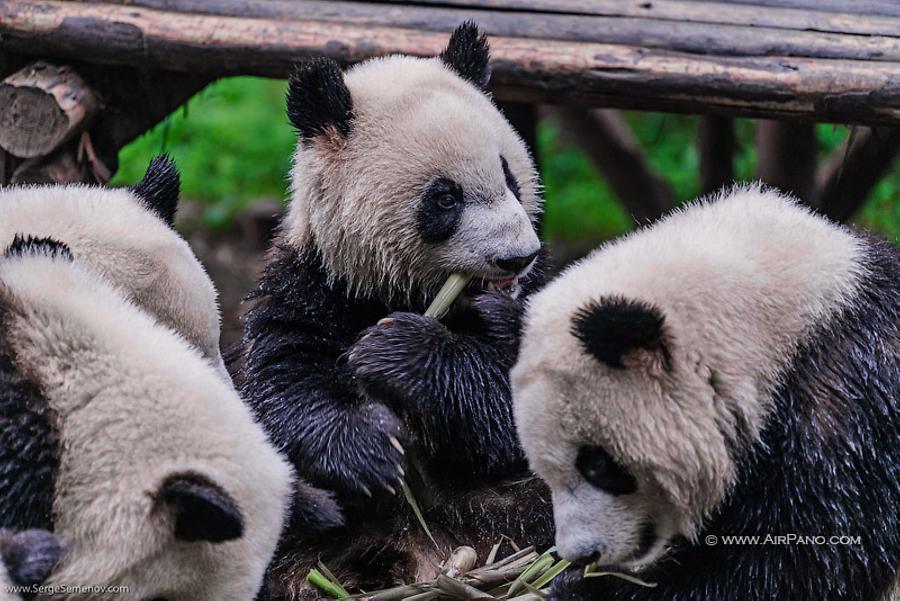 Chengdu Research Base is huge and one day is not enough to visit all the enclosures. In order to have time for everything, one can use electric cars. If you visit the base in between May and September, it is better to come to the opening hours of the base or even earlier: at fresh morning hours animals are rather active, but as soon as the temperature rises, even the youngest and most playful pandas become sleepy and hide in covered shelters. And during the hottest days pandas are kept in special conditioned facilities. Even though Panda Base does not has official closing hours, as a rule by 6 p.m. there are no tourists on the territory of the centre. 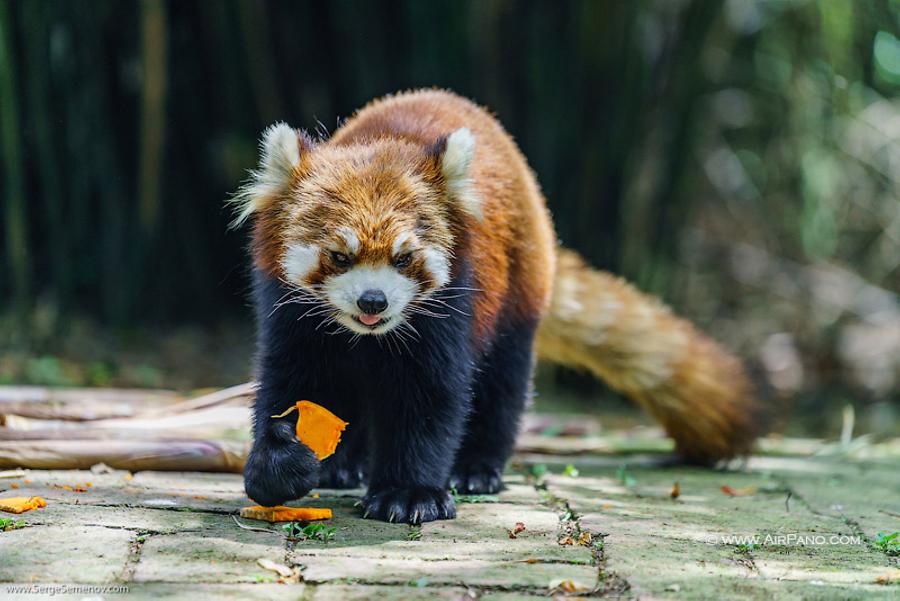 The process of feeding pandas is rather interesting. Every adult specimen needs 30-40 kilos of bamboo daily, but in artificially created parks it is impossible to grow this amount of bamboo, so the pandas are fed with a special "panda pie" made of bamboo fibres. It tastes like an apple pie with nuts; even park workers like eating it!

But it is wrong to think that pandas eat only bamboo: their ancestors were meat eaters, and contemporary giant pandas are practically carnivorous. In the wild, pandas eat eggs, small birds and animals, insects and carrion: the animal food is an important source of the protein. 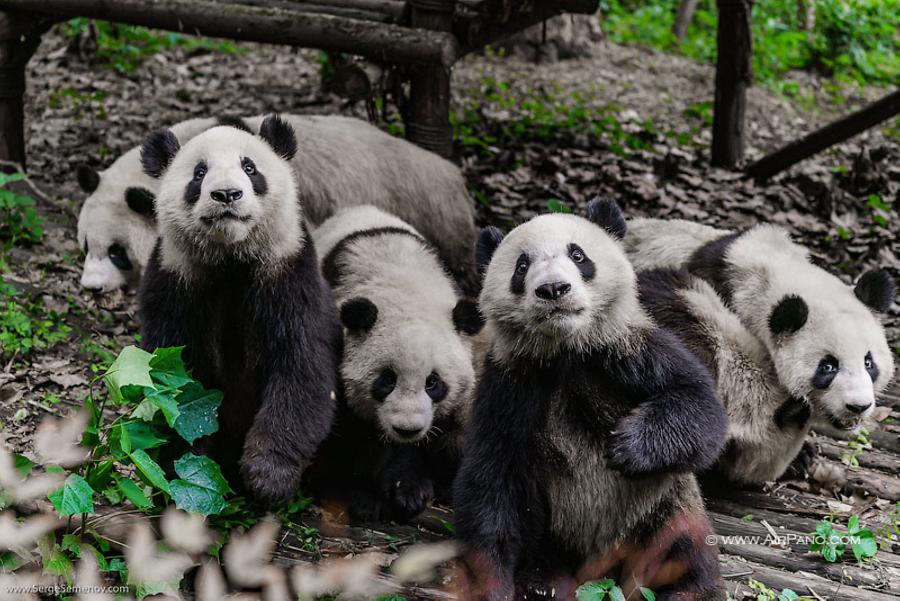 Nevertheless, their diet is primarily based on bamboo: over the course of evolution, their organism has adapted to the plant of bamboo which is widespread over the area of their natural habitat. The "thumb" on their paws is actually a modified sesamoid bone which helps pandas holding even thinnest bamboo stems while eating. Their oesophagus and stomach are protected from bamboo chips by a thick mucous tissue.

Among other things, pandas are fond of sweet food: to satisfy the need for sweet, they eat fruit and vegetables. Giant pandas like apples, while their lesser "fellow brothers" prefer pumpkins.

AirPano team together with our colleagues from UtoVR worked here as the 360°-photo and 360°-video consultants for Pandapia, also we were engaged in the post production, that's why Chengdu pandas are in the focus of these panoramas. The process of shooting turned out to be incredibly exciting: pandas are among world's most loved animals, but comparing to kitties and puppies they are too rare and photos of them are also infrequent. The panorama captured in an incubator with a tiny panda is truly unique. From the moment of birth until maturation the panda grows in size by 1,000 times! 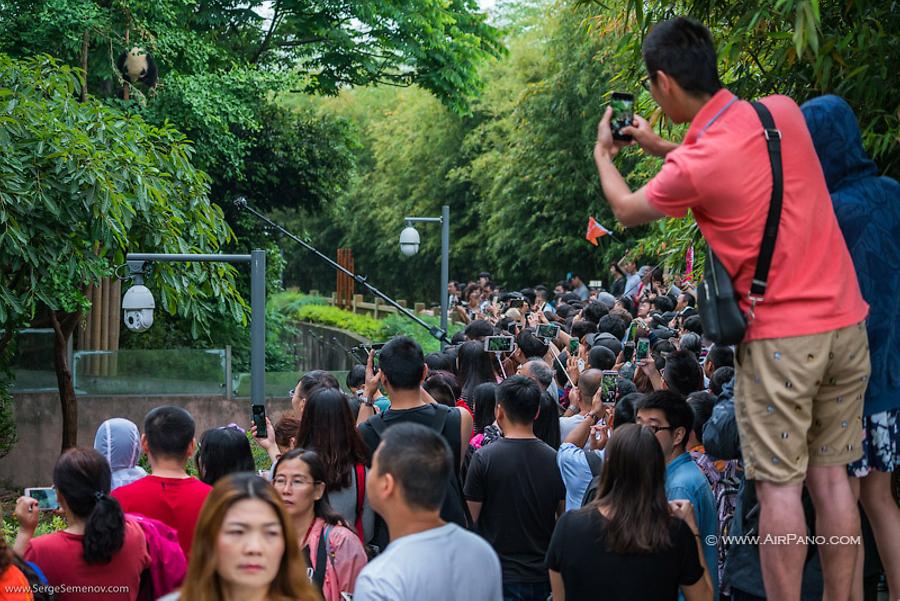 When taking pictures of animals there is always an element of surprise: when the cameras are already turned off and you are going to leave, suddenly a small bear starts somersaulting wildly. For small pandas there is also an everyday session of bathing: they are put in a bath and showered in order to cool them down, and it is an unforgettable show.

Every panda in the base has the name. I remembered Starlet, Milky Way, Shadow Lover. Pandas or groups of pandas have their personal keepers: in case pandas leave for another reserve or zoo, the keeper accompanies them to the destination and welcomes them back upon their return. And, finally, Panda Base has its official ambassadors. The famous actor Jackie Chan, the popular Russian singer Valeria and many other famous people of China and the whole world are among them.

But despite all the comfort created for pandas, the conditions are far from natural. A more secluded life of giant pandas can be witnessed in the mountain reserve Dujiangyan Panda Base and Center for Disease Control that is approximately 55 kilometres from Chengdu. Pandas come here for different reasons: some are born here, some are taken here for the treatment. Special enclosures for their smooth adaptation, further life in the wild and comfortable existence of the old-age pandas were created here. Some part of the reserve is absolutely wild with the only difference that it has a higher level of the wild animals protection. The territory is so huge that a visitor can spend one week walking in the reserve without meeting a single panda! 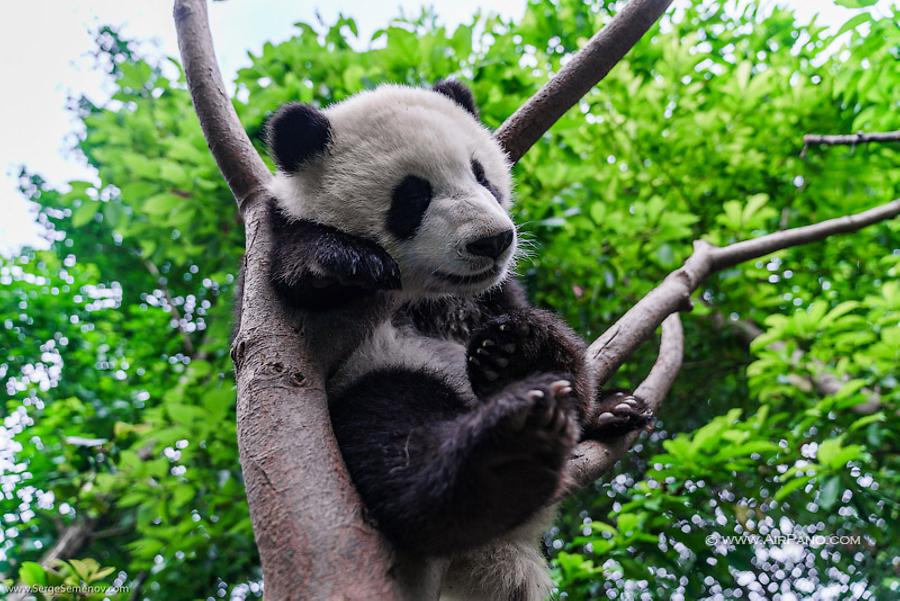 Altogether Dujiangyan Panda Base and Center for Disease Control occupies more than 50 hectares, and all the active and capable animals are given total self-dependence. They don't even have special feeding areas, although workers of the base watch them remotely and in case a panda can't find the food for a long time, they put some bamboo for it.

You can have a look at the safe "panda oasis" from above with the help of the AirPano panoramas.

19 Panorama of Chengdu Research Base of Giant Panda Breeding