Myanmar is one of the most mysterious countries in the world. It borders India, Bangladesh, China, Laos and Thailand. Each of these destinations (except, perhaps, for Bangladesh) is full of tourists. But Myanmar remains outside of usual tourist routes. There are no direct flights from Russia, visa to Myanmar is not the easiest one to get, not to mention that it's not really advertised by travel agencies. This is why this amazing destination remains unknown to the world.

To say that one misses a lot by not going there is an understatement (you'll understand why when you see our panoramas). This country with a century-old history has preserved countless of monuments and it is rightfully called the "Golden Country" or "The Land of Golden Pagodas". There are around 2500 pagodas there. In fact, the entire country is one huge archaeological reserve, which preserves heritage of ancient civilizations.

Of course, it's impossible to describe thousands of pagodas and other Myanmar landmarks in just one article and to show all of them in one panorama cycle. So we're planning to tell you only about the most outstanding monument, the Shwedagon Pagoda (stupa).

Stupa is a dome symbolizing Buddha's teachings. Usually stupas serve as Buddhist shrines and repositories of sacred Buddhist texts. Some stupas conceal different vessels with Buddha's pieces of clothing or his hairs. Stupas are topped with spires that look like umbrellas, a symbol of protection from the rays of ignorance. Bells are hanging on the stupas to express the symbol of doing some good things.

The capital of Myanmar, Yangon (Rangoon) is known for the most famous stupa in the country, the Shwedagon Pagoda, along with a temple complex around it. These constructions are a couple thousand years older than the city itself. The name comes from «Shwe» (Burmese for "gold") and «Dagon» (previously this settlement was situated where the modern Yangon now exists). 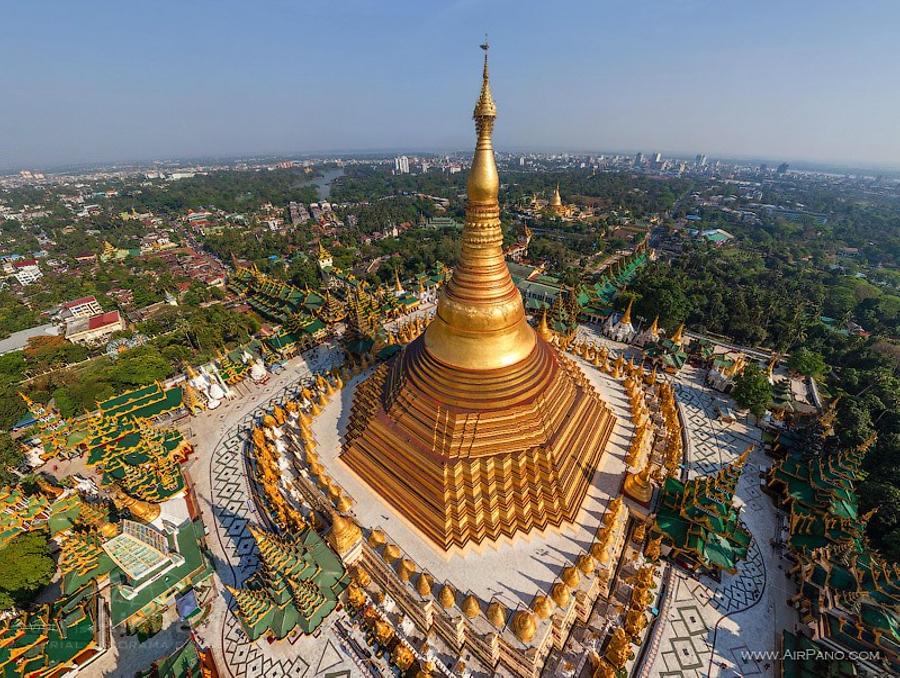 According to the mystical yet forgotten legend, in ancient times this was the place where relics of three predecessors of Buddha were kept: the staff of Kakusandhi, the water filter of Konagamana, and a piece of tunic of Kassapa.

One day unknown brothers took a few hairs of Buddha from India, but during the trip they were attacked and robbed several times. However, they were able to deliver part of the sacred treasure — they brought eight hairs of Buddhism founder to Myanmar.

A grand festivity was held to celebrate this event. Lord Sakka and four spirits descended from heavens to choose a worthy place to store Buddha's hairs. They helped to discover three forgotten sacred places, and, as a result, it was decided to keep all sacred objects together with proper honors.

Thus, Shwedagon is the only temple in the world which holds four Buddhist relics of such high value. Furthermore, it's one of the few structures created during the life of Buddha.

It was built with great care and thoroughness by ancient Burmese. They dug a hole on a hill near Dagon, built a tomb, and covered it with a golden plate. Several stupas made from different materials were erected on top of it one by one: golden, silver, tin, copper, lead, marble, iron, and brick. 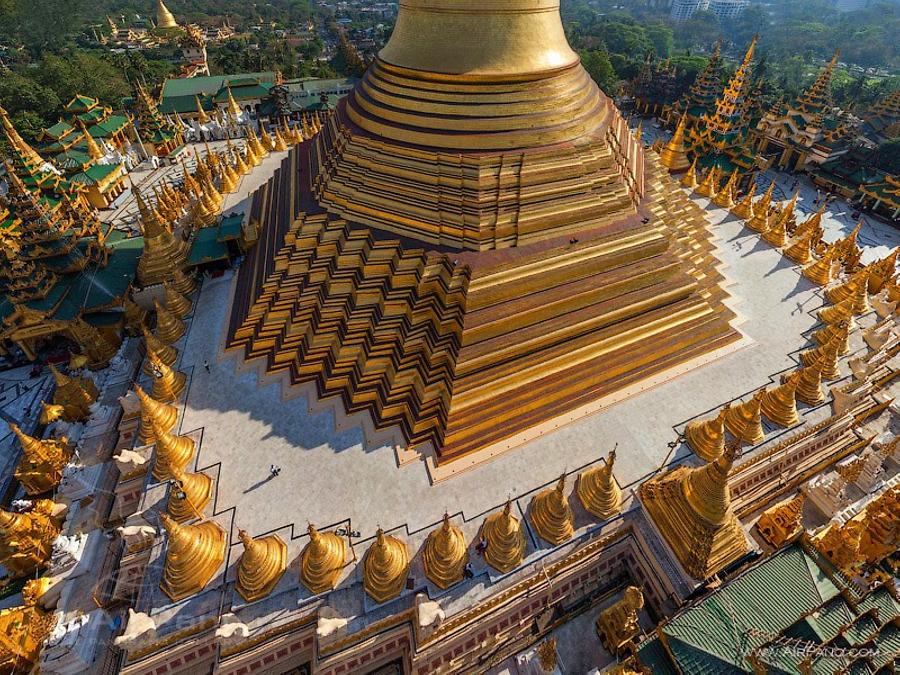 The Shwedagon Pagoda reached its current height only in 1774. After being rebuilt several times by King Hsinbyushin, it reached the height of 99 meters above the plate. At the same time the Shwedagon Pagoda started looking the way it looks now.

All sixty-eight surrounding stupas are gilded, while the Shwedagon itself is sheathed with golden plates from top to bottom. 8000 gold plates, 5000 diamonds, 2000 gem stones and semiprecious stones were used to decorate the main pagoda.

So it's not surprising that the stupa was repeatedly plundered over the years, and some parts, like three hundred years old bell encrusted with jewels, are now lost. However, the Shwedagon Pagoda in Myanmar has survived to see our days in its full glory.

There are bells hanging along the perimeter of the temple complex with wooden mallets lying nearby. It is believed that if you make a wish and hit the bell three times it will come true. So here and there you can always hear a bell's ringing in the distance.

This Myanmar landmark represents this country like the Moscow Kremlin represents Russia, or Mount Fuji represets Japan. The Shwedagon temple complex is one of the largest architectural ensembles not only in Myanmar, but in all of Southeast Asia. You can always see the golden cone of the central stupa dozens of kilometers away from Yangon, both from sea and land. 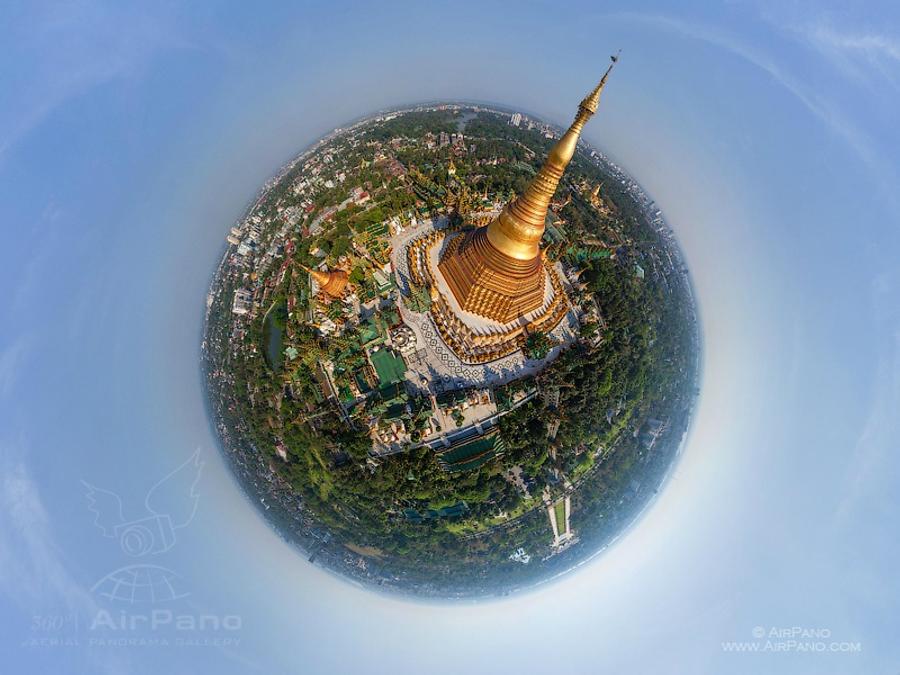 In order to get to the pagoda you have to climb the highest hill. But modern technologies made this task a lot easier: an escalator can take you to the Scwedagon. And for those of you who are thousands miles away from this amazing monument, there is a perfect opportunity to see it from the height of our panoramas.