Bhutan – Its beauty on stamps# 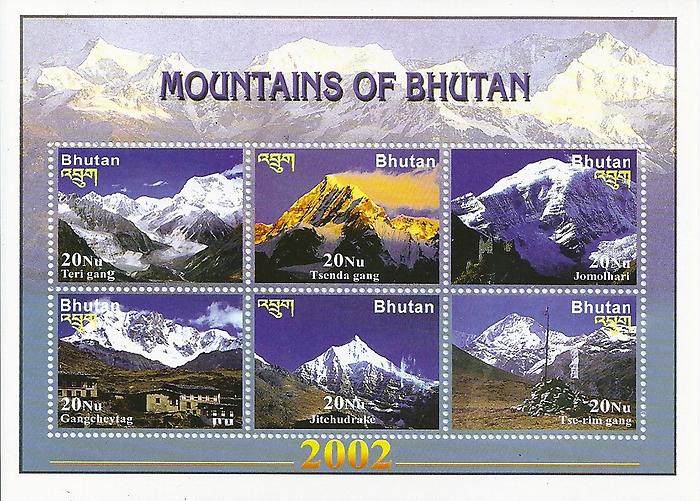 Die Berge Bhutans
Photo: G. Jontes, under CC BY 4.0
Bhutan is the only remaining kingdom in the Himalaya region. With its only 38.000 km² (less than half the size of Austria) it is one of the smallest countries in Asia. Its population of 1,2 million lives in a coutnry that extends from rain forests in the South via strip of temperate climate to the snow-covered peaks of the Himalaya.

The official name of the country is Druk Yul, meaning "thunder dragon". Its culture and religion is a kind of Tibetan version of Buddhism.

Bhutan has learnt from its neighbours about the catastrophal consequences of unchecked tourism in a beautiful country. It has never accepted developmental help from outside, yet in numerous small hydro stations it is producing enough electricity to export it to energy hungry neighbours like Nepal, India and Bangladesh.

Foreigners are allowed to enter only in limited numbers for short periods. There is no alpinism. Smoking is completely prohibited. Whatever is built must be built with local material and in traditional architectural style. The use of plastic materials is very restricted. All people wear traditional clothes produced on the basis of Bhutan's long and strong tradititon in textile production.

As small as it is, it is a powerhouse when it comes to stamps. The stamps show all kinds of topics dealing with nature and culture of the country. Their quality is excellent, and they are loved by collectors all over the world. Considering this it comes as surprise that Bhutan had its first own stamps only in 1962! This was the year when the first road suitable for vehicles with wheels was opened, making faster transport of postal goods viable.

What also makes the stamps unique is that many are not printed on paper, but there are whole issues on silk, or gilded, or on sheet steel. Among the stamps those on plastic material were quite a hit, since the were designed as small gramophone records that could play pieces like the national anthem or some folk music.

The shapes of stamps varies from round, to rectangular to triangular. Stamps are often printed in blocks with beautiful pictures or such surrounding the stamps proper. Bhatan was also the first country to offer stamps with 3D print! The writing on the stamps is in Dzongkha, a language related to tibetan language, and in English laguage. As wirtten alpahet often the Tibetan one is used.

Link to a series of stamps#