Photos by Sergey Semenov, Max Nasekin, and Yury Kravtsov, members of the AirPano Team that is a member of the global-geography Consortium.

Armenia is a land steeped in legends and renowned for its long history. The ancestor of the Armenian people is considered Hayk, who came from Mesopotamia and founded a state on this territory in 2492 BC. Since then, many different events have taken place here, and the earliest monuments have not survived to this day. But the heritage of the precious several centuries, as well as natural wonders, are carefully protected. Let's take a trip to this wonderful world! 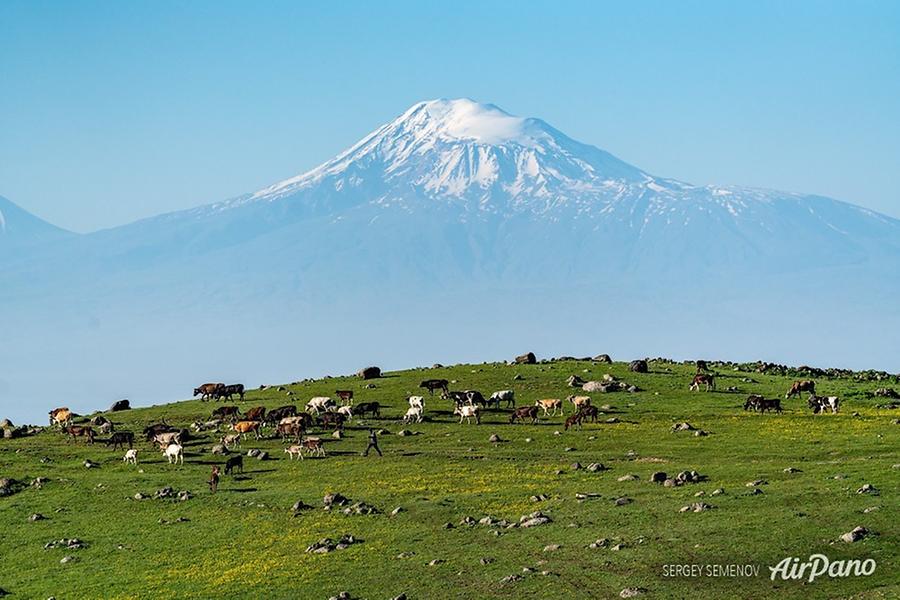 Armenia
© AirPano
In the western part of the country, there is the ancient monastery of Khor Virap. Long ago, this place housed the ancient capital of Armenia Artashat, and on the hill, the place where now the monastery stands, there was a prison. King Tiridates III kept Gregory the Illuminator in captivity in this prison, and this is the most important milestone in Armenian history. Saint Gregory helped the cruel king to convert to Christianity, and then the whole country adopted a new religion; this happened in 301. Khor Virap temple was built in the 7th century on the site of this prison; and now about 95% of the population still professes Christianity. The traditional temple architecture of Armenia is one of the most beautiful and original in the whole world. 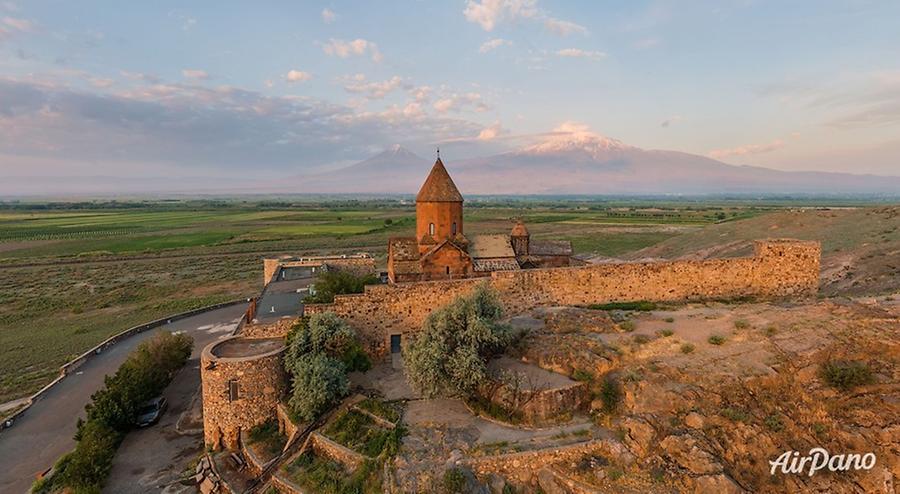 Armenia
© AirPano
Garni gorge in Kotayk Province is a world famous natural monument. Its slopes consist of hexagonal ‘prisms', which look so unusual and sublime that they received the unofficial name ‘Symphony of Stone'. But this is not quite the correct name: the columns are formed from solidified lava, basalt, in combination with sedimentary rocks. The landscape can be accurately compared to the Martian landscape: similar traces of the same geological processes were found on the Red Planet. 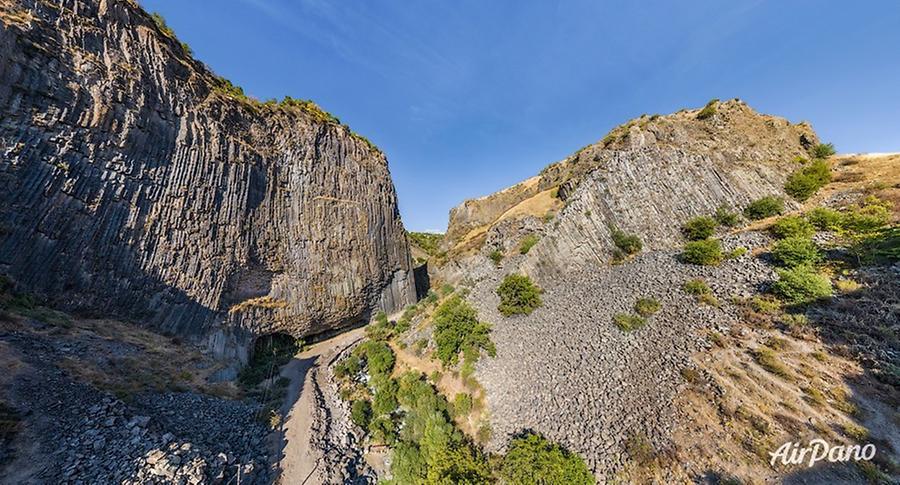 Armenia
© AirPano
And in the village of Garni, there is a completely unexpected sight: an elegant temple dated the 1st century A.D. modelled on the Hellenistic-Roman type. It was destroyed by an earthquake in the 17th century, but rebuilt during the Soviet era. This is the only pagan monument in the entire country. Hovhannavank Monastery together with a 5th century basilica is another great example of the Christian heritage of Armenia. It was damaged several times during earthquakes, but it always rose from ruins. The remnants of the fortress walls with towers dated the 12th-13th centuries and ancient gravestones have also survived to this day.

Armenia
© AirPano
The city of Martuni (Gegharkunik) lies on the southwestern shore of mountainous Lake Sevan. Its surroundings are endless hilly meadows cut by rivers, and this is one of the illustrations of the diverse nature of Armenia. The complex of Geghard Monastery is included in the UNESCO World Heritage List. Its full name translates as "monastery of the spear": the spear, which is believed to have pierced the body of Jesus Christ on the Cross, was kept here for a long time. Now it is exhibited in the Echmiadzin Museum, but the holy place continues to attract both pilgrims and tourists. The monastery was founded in the 8th century; many of its rooms are hollowed out inside the rocks, and the complex itself is decorated with ornaments and carvings.

Armenia
© AirPano
Haghartsin Monastery and the surrounding buildings were built in the 10th-13th centuries. According to legend, an eagle flew over the dome of the main temple during the opening ceremony. It was considered a good sign, and the name itself is Armenian for ‘soaring eagle'. 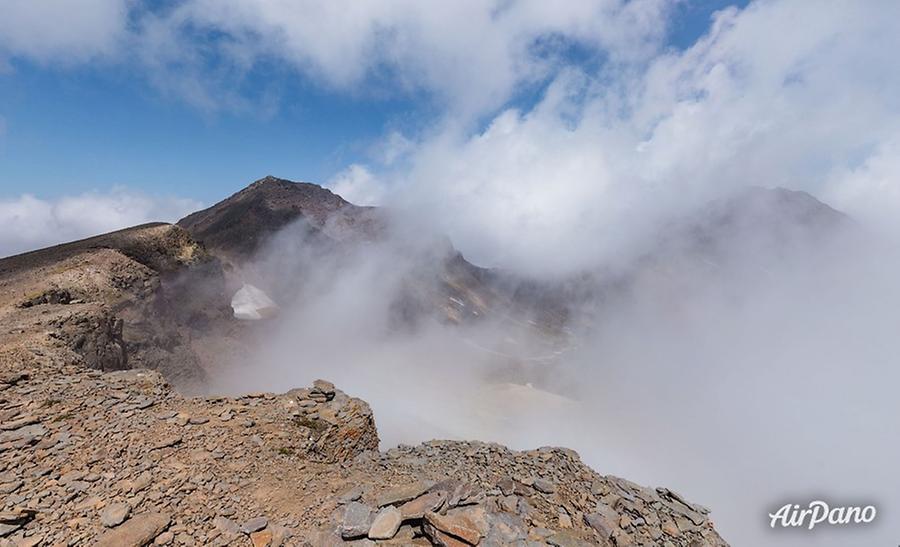 Armenia
© AirPano
The Aragats mountain range is the fourth highest in the Armenian Highlands and the highest in the country: 4,090 meters! It stretches for 40 km from east to west, and 35 km from north to south. Its main peak is a stratovolcano that fell asleep thousands of years ago. Its slopes are covered with solidified lava, forest and meadows. At an altitude of 2,300 meters there is the Amberd castle: ‘a fortress in the clouds', as this name sounds in Armenian. The fortification was built in the 10th century and destroyed during numerous raids over the following centuries. The ruins cover 1,500 square meters; at the time of its existence, it was not only a strategic object, but also a quite comfortable castle which could receive royal persons. 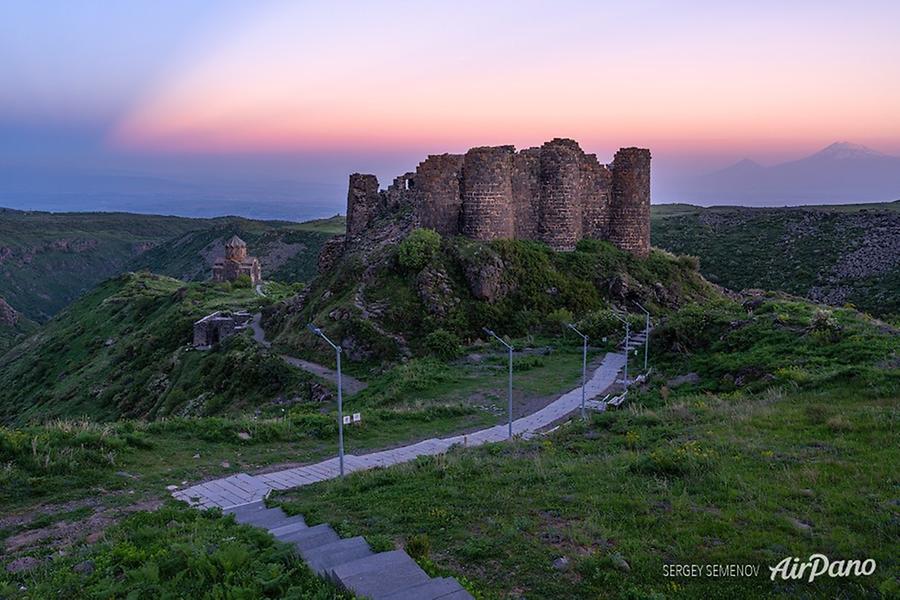 Armenia
© AirPano
The medieval monastery complex of Harichavank relates broadly to the 13th century, although its oldest building, the church of St. Gregory, appeared in the 7th century. This picturesque and majestic monastery has long been the summer residence of the Echmiadzin Catholicos. Among the green massifs of the mountains, the village of Gosh lies: traditional and young at the same time. In the 12th century, the famous Armenian thinker Mkhitar Gosh founded the Goshavank (Nor-Getik) monastery nearby, and in the 19th century a village appeared in the vicinity, named after the same great figure.

Armenia
© AirPano
Beauty, serenity, spirituality: all these things can be said not only about rural landscapes, but also about all the places that you visited on this virtual tour with AirPano.