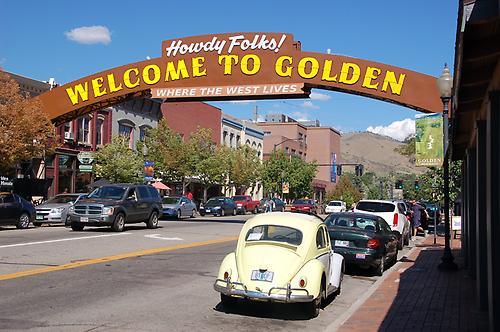 Walking through a remarkable small city #

Some 25 km west of Denver USA, Denver (the captial of the US state of Colorado) in the center of Jefferson County at the foot of the Rocky Mountains the city of Golden USA, Golden is located. Its name is justified for more than one reason.

First, a Thomas L. Golden founded the place in 1859 during the goldrush that had turned the area into turmoil. He himself was looking for gold. The settlement Golden became the central supply location for all miners and gold-washers in the mointains and in the creeks and rivers.

From 1862-1867 Golden was even the captial of the then territory of Colorado, inhabited by Native Americans, in particualr by Arapahos, Cheyennes, Ute and other Indian tribes.

It has a rich history of ups and downs, but is no recognized as the city housing the internationally well known Colorado School of Mines, that offers programs in engineering and science. Also there are the National Renewable Energy Laboratory, National Earthquake Information Center, Coors Brewing Company, CoorsTek, Spyderco, American Mountaineering Center, and the Colorado Railroad Museum.

It is the birthplace of the Jolly Rancher, a candy bought out by the Hershey Foods Corporation. Famous western showman William F. "Buffalo Bill" Cody is buried nearby on Lookout Mountain.

The Coors Brewery had become the largest single-site brewery in the world, its porcelain subsidiary among the foremost of its kind, and Golden became home to the National Renewable Energy Laboratory.

It has almost grown together with Denver but managed to retain its charm of a small, neat, history-conscious city as the pictures of the walk will demonstrate.