‘The world as we know it, is nearly over', I am listening to a song by Boris Grebenshikov on my iPhone. ‘So, damn it' he concludes.

Nowadays apocalyptic articles about approaching eruption of presently dormant stratovolcano, which is situated in Yellowstone National Park in Wyoming, U.S., are published more and more often. Both mass exodus of bisons and increased seismic activity are reported. It is said that this volcano erupts once in 30 thousand years and that it missed its previous time, so by now it has gathered two times more energy. It is predicted that the bigger part of the USA will be covered with ache and the dust curtain will deprive Earth of sunlight resulting in a new ice age.

No doubt that being in Russia, on the opposite side of the Earth, we got used to any crisis and cold weather so all this story about volcano seems not real and not that frightful. Well, just in case, we have decided to publish our heli-virtual tour around snowy Yellowstone National Park. 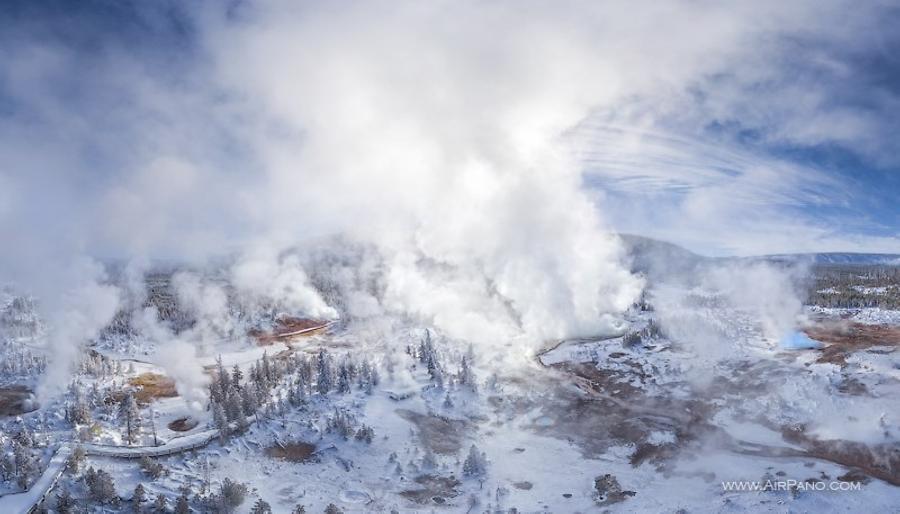 In fact, there are only five places on the Earth where geyser activity exists. These are Iceland, New Zealand, Kamchatka, the USA and Chile. And this is exactly Yellowstone where two thirds of the world's erupting thermal springs are situated! Though we are very sad to admit it, but our Valley of Geysers in Kamchatka looks like a small part of the huge geyser field in Wyoming. Yellowstone has this immense thermal ‘treasure' due to the fact that the Park is situated in a crater (to be precise in caldera) of a huge dormant volcano and the heat comes very close to the surface which consists of the thin lava crust hardened more than 60 thousand years ago. It looks like Uzon in Kamchatka but ten times bigger, so that in Uzon there is only one geyser and in Yellowstone — 3 thousand! 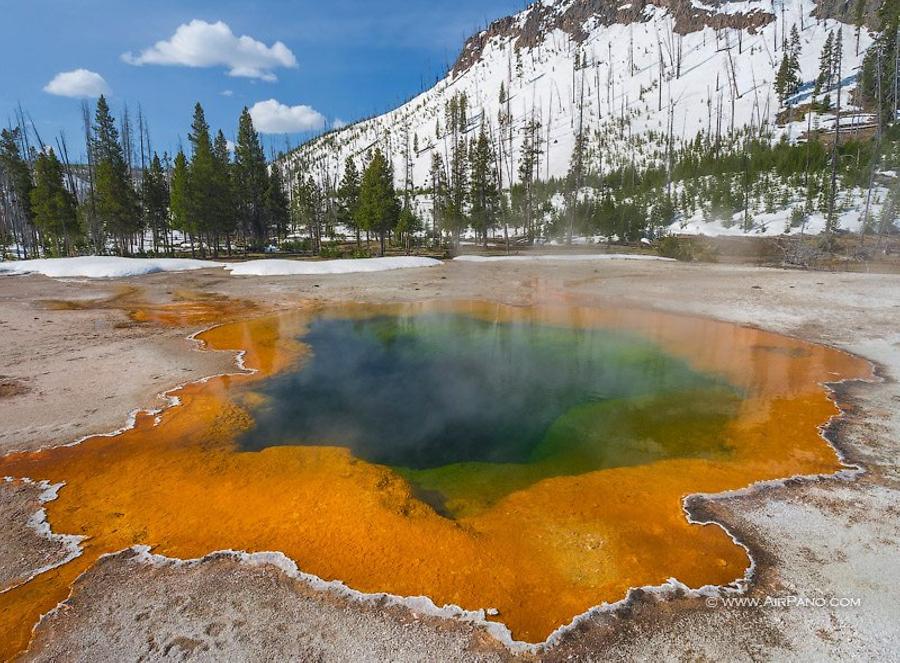 I have been to this National Park before, in 2002. I was making some reports for NTV company. I was there in June, the snow had already melted and I remembered it ever afterward: the beauty and grandeur of the Park, great number of geysers and thermal lakes, bright-blue colour of hot springs and its multicoloured shores which were the result of the activity of bacteria and waterweed. That is why the decision to go to Wyoming in December for taking photos of the active geysers was made without hesitations. 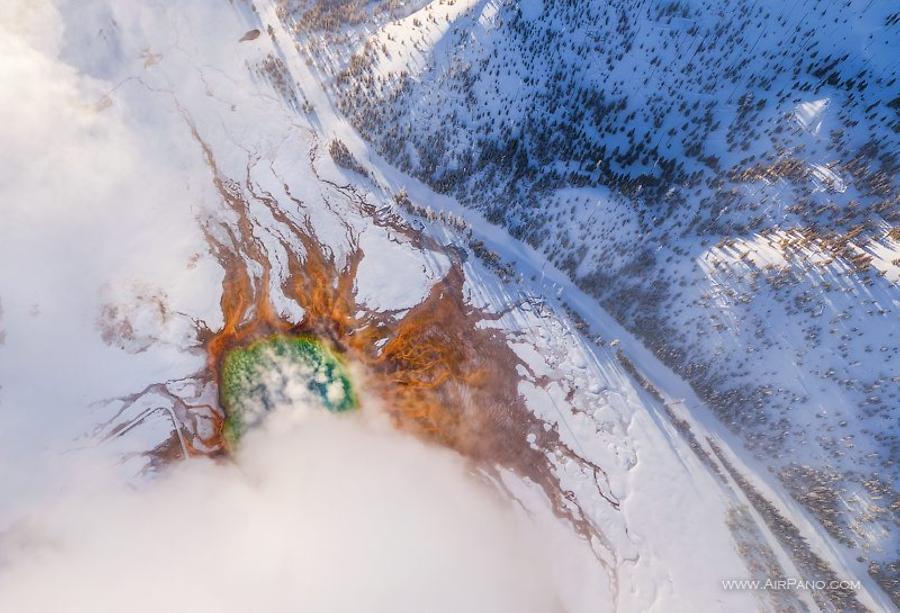 We decided to enter the park from the side of the town called West Yellowstone. Having arrived at the destination we found out that the weather forecast promised one day of snowfall and only then a fine day. So our idea was, as it was a day of snowfall, to enter the Park on snowcats and take photos of thermal springs in freezing temperatures. For this purpose we were given super-warm suits (afterwards I requested one more for flying in a helicopter). 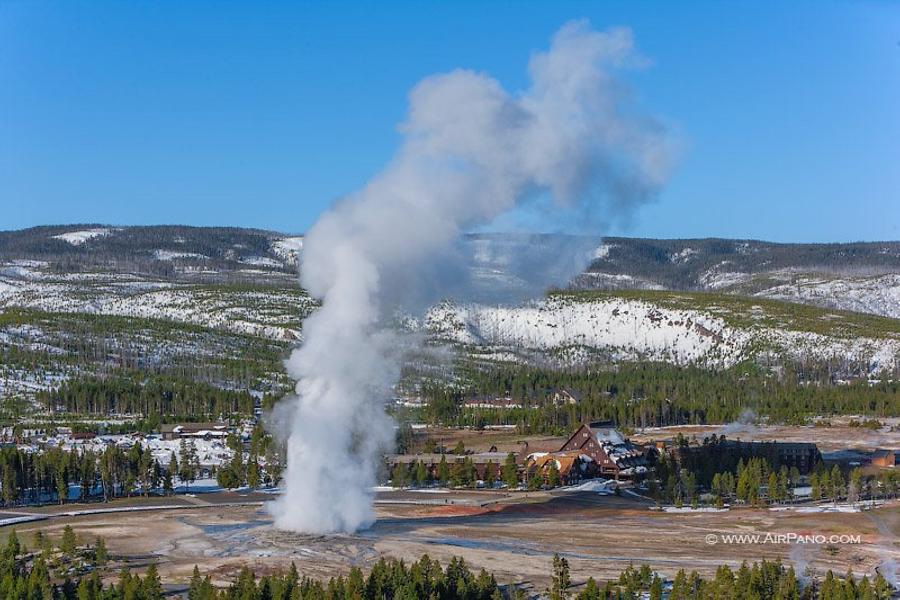 There were very few people in the Park, instead we came across bisons, foxes and deers. The most famous geyser named Old Faithful was waiting for us 30 miles from the entrance of the park. On our way to it we were going to visit the biggest, most beautiful, and colourful Grand Prismatic Spring. What was our disappointment when it turned out that its marvellous colours were pale due to a gloomy day and its surface was hidden by evaporations of boiling water. Old Faithful Geyser erupts with a strict interval of 90 minutes. We got there exactly in time to look at 30-meters high stream of boiling water and then went back. 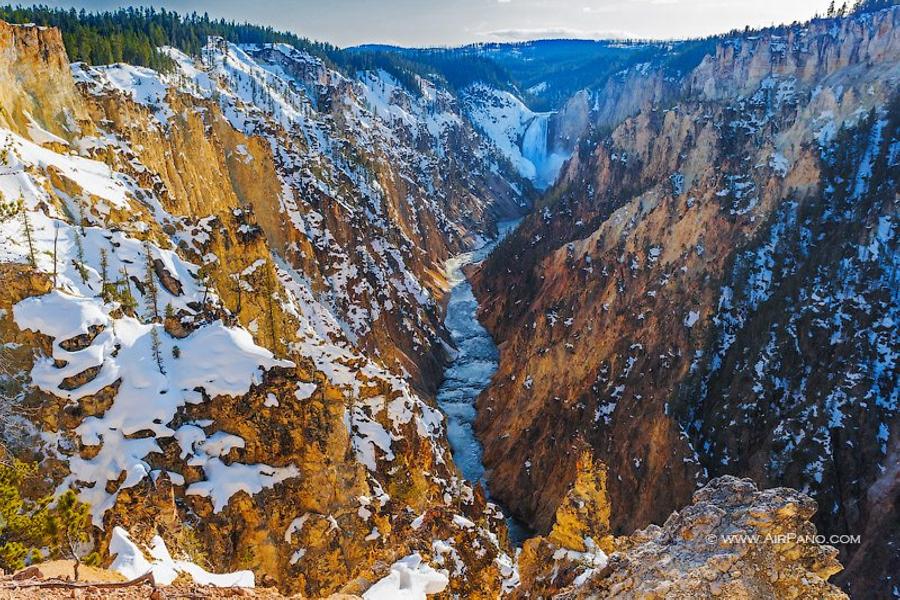 After getting warm in a hot bath and finding out that the weather forecast was not going to change, I ordered a helicopter to take me to the Park in the early morning. Indeed, the morning was truly fine, but the temperature dropped to around 25 °C below zero. We were going to fly in a helicopter with an open door for around 2 hours. So, having cocooned myself in that snowcat suit, prepared ski glasses and hidden my nose in a protective neoprene scarf, I gave a command to take off.

The morning mist was streaming above the Park, we headed for Grand Prismatic Spring. Soon in a distance we distinguished a strange static cloud that was not moving. Having flown around this cloud the pilot noticed that, according to navigator, the Spring was left behind. He turned round and headed for the cloud again. We still couldn't spot a multicoloured lake. On the third attempt I asked the pilot to go down a little bit and, oh wonder, the Grand Prismatic Spring appeared just below us. The cloud itself turned out to be the evaporation of the Spring. A soft wind blew this cloud slightly into the side, so I had an opportunity to take several photos. 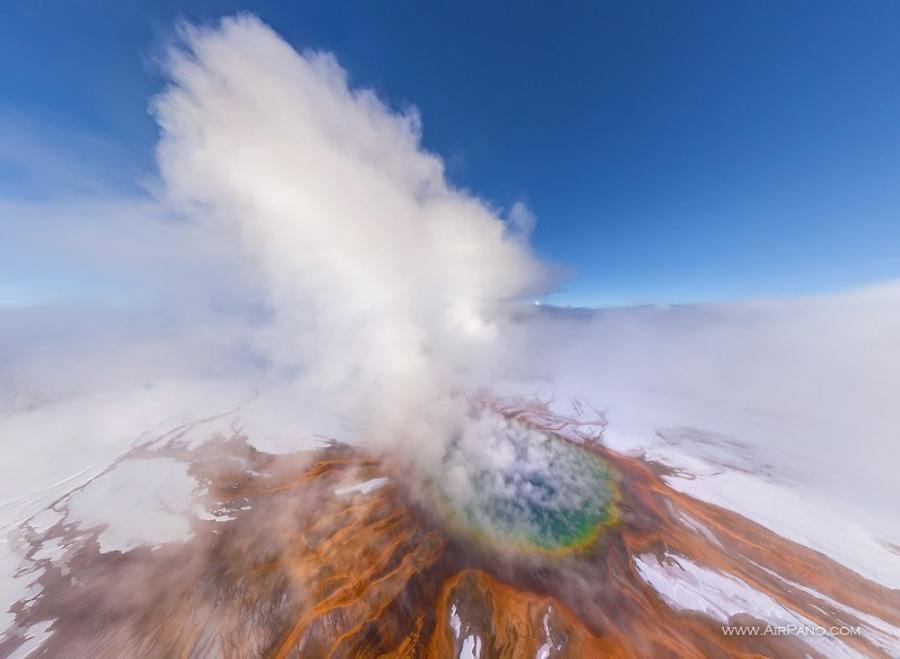 Thus we were given an idea that we should look for these clouds of mist as they hid the most interesting things. Having finished with Old Faithful we headed for the Grand Canyon of Yellowstone which is famous for its waterfalls. The Park was covered with snow, chilly air was piercing through my suit, occasional spots of hot springs and thermal lakes could be hardly noticed under the clouds of vapour.

On our way back we again came across the concentration of mists and hovered over Norris Geyser Basin. From my point of view it was the most beautiful geyser area that I saw in wintertime. The sun was gleaming through evaporations and silvering all the surrounding landscape. Feeling spellbound by this beauty I totally forgot that my feet grew numb and my fingers in snowboard gloves could hardly bend. Having taken some pictures we finally left the park. 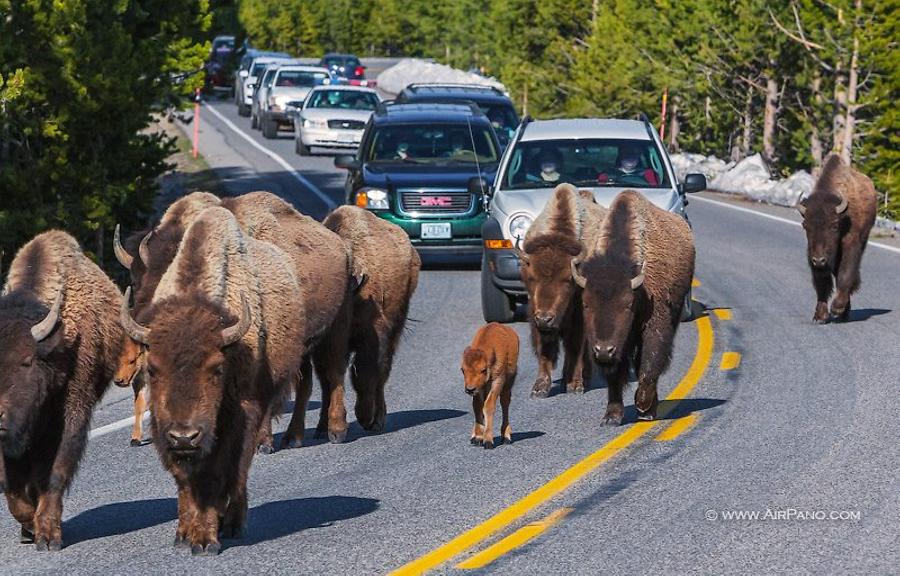 In my hotel room I spent more than two hours warming by a heater. But a couple of cognac shots suggested by my helpful friend did it part and, to my own surprise, I did not fall ill.

I have to admit that Yellowstone National Park is not a friendly and picturesque place in such weather; its main treasures, such as multicoloured geysers and springs, are hidden under its own evaporations. However, there was not a single second of doubt or regret about my decision — very few people are brave enough to visit the park at this time of the year. And you have a unique chance to see Yellowstone in winter time.