The deepest canyon in the world is one of the most famous US tourist attractions. And it's respectively called the Grand Canyon of Colorado Plateau: "grand" means "big, magnificent, enormous, great" and so on and so forth. The Grand Canyon was added to the famous UNESCO World Heritage List in 1979. The list itself was created in 1972, which makes the Grand Canyon one of its first entries.

The width of the canyon ranges between 20 and 6 kilometers. However, there is one spot where it narrows down to 800 meters. As it narrows down, the walls pull closer together reaching 100 meters gap at the rock bottom.

The canyon has been in the making for 10 million years. 4 different geological eras of Earth are represented in the canyon. Underground forces pushed the Colorado River bed up, forcing the water to gradually cut into the plateau and wash out the canyon's soft rocks. This process is still active: the Colorado River washes out about half a million tons of rock a day, so that even the hardest granite walls of the canyon surrender about quarter of a millimeter each year to this "filing".

The canyon doesn't look like a long narrow hole in the ground at all. It's randomly filled with rocks and cliffs of different shapes: giant pagodas, pyramids, towers, fortified walls and other incredible formations made by nature... Having been thoroughly studied by modern scientists, and being the most famous US tourist attraction, the Grand Canyon receives a lot of visitors. Many of the Grand Canyon cliffs now have their own original names. Such as, Vishnu Temple, Shiva Temple, and Wotan's Throne.

Of course these names are fairly new. Native Americans knew about Grand Canyon thousands of years ago and probably gave those rocks different names. However there is no written evidence of it, only petroglyphs.

The modern human history knows two Grand Canyon discoveries: first one happened in 1540 when a group of Spanish soldiers stumbled upon it in their search for gold. Greedy Spaniards found no gold and no water there, and admiring Grand Canyon scenery wasn't in their plans, so they left and never mentioned this location.

After this incident Europeans have forgotten about the canyon for several centuries. In 1869 professor John Wesley Powell organized first scientific expedition to Grand Canyon. Powell explored and described the canyon. By the way, another US tourist attraction was named after him — Lake Powell.

But let us go back to our canyons. Nowadays a trip to Grand Canyon is on top of the list for almost every tourist coming to the USA. And not so long ago (in the 1940th and 1950th) one could take a picture of the Grand Canyon without actually going there. The thing is that many passenger airlines, flying in this area, intentionally took a scenic route so their passengers could admire the view of the Grand Canyon. It was also common for pilots to make several circles and roll the plane to give the passengers the best view. This was permitted until the collision of 2 passenger aircrafts in 1956. Since then the "dancing" over the Grand Canyon has been prohibited. 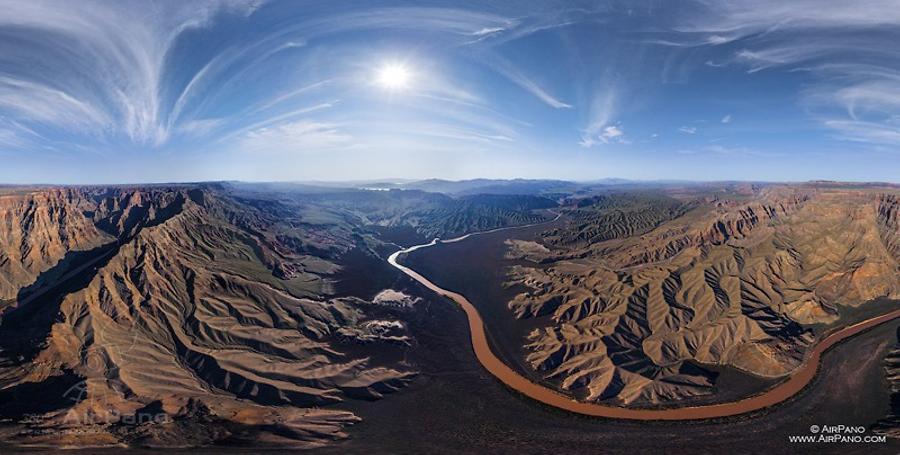