50 kilometers northeast of Mexico City lies Teotihuacan (Teotihuacán), the ancient empire-city that used to be very large in size and then decayed over time. Today the ruins are restored for the tourists.

People have inhabited this territory, which had primarily been an agricultural area, since the 2nd millennium B. C. Modern scientists were unable to establish an exact date of when Teotihuacan was constructed. However, it is known that the mass migration of people from Cuicuilco, another city located in the Valley of Mexico destroyed by a volcano eruption, to Teotihuacan took place in the 2nd century A. D. 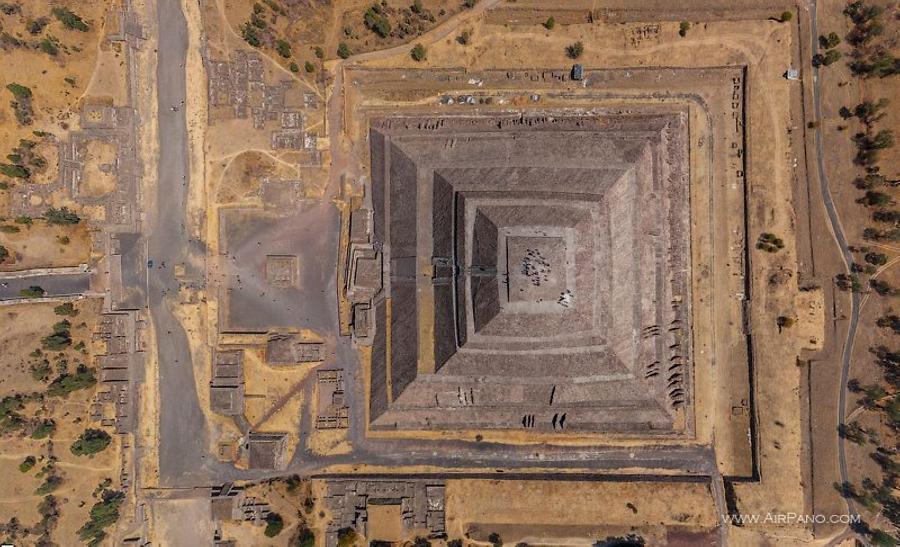 Pyramid of the Sun. Top view

Teotihuacan was developed according to a strict plan: the streets were positioned at a right angle in accordance to the main avenue; adobe houses had only one story, a flat roof, and no windows. Facing a tiny backyard, doors were the only source of fresh air and light. Researchers suggest that during the period of prosperity the city occupied over 27 square kilometers and was home to no less than 125 thousand people. Religion was the most important part of their lives, and so even the poorest houses had home altars.

The art, mythology, and architecture of Teotihuacan were dedicated entirely to the pantheon of Gods. The main deity was Quetzalcoatl, the god with a snake body covered in birds feathers. The Temple of the Feathered Serpent is one of the largest structures of the ancient city. It is located on a central square that Spaniards called La Ciudadela (the Citadel). The temple is built in the form of a pyramid and is decorated with reliefs depicting snakes, dragons, demons, and a fire-breathing head of Quetzalcoatl. 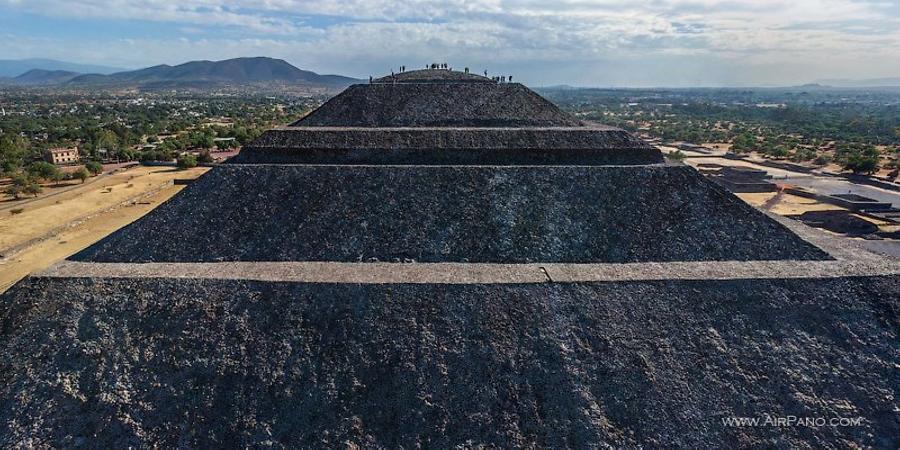 The north side of the Pyramid of the Sun

Sacrificial animals were buried inside of the Feathered Serpent Pyramid. In the 1980s, scientists also found the remains of 137 people during an excavation under and around the pyramid. It appears that these people were also sacrificed: their hands were tied behind their backs... Also, a few years ago archeologists found a walled tunnel, the purpose of which remains unknown. One of the theories suggests that it was a place for the most sacral rituals; another one suggests that it could have been a burial ground for rulers and priests.

A 3.5-kilometer-long concrete road called "Avenue of The Dead" starts from the Citadel and goes from south to north at a 30° angle. If you look along the road from its starting point, the south side, the elevation creates an illusion that the road goes right into the sky. Along the Avenue of The Dead are many smaller temples. Perhaps, they inspired the name of the avenue: according to one of the theories, the Aztecs that arrived at Teotihuacan believed they were tombs. 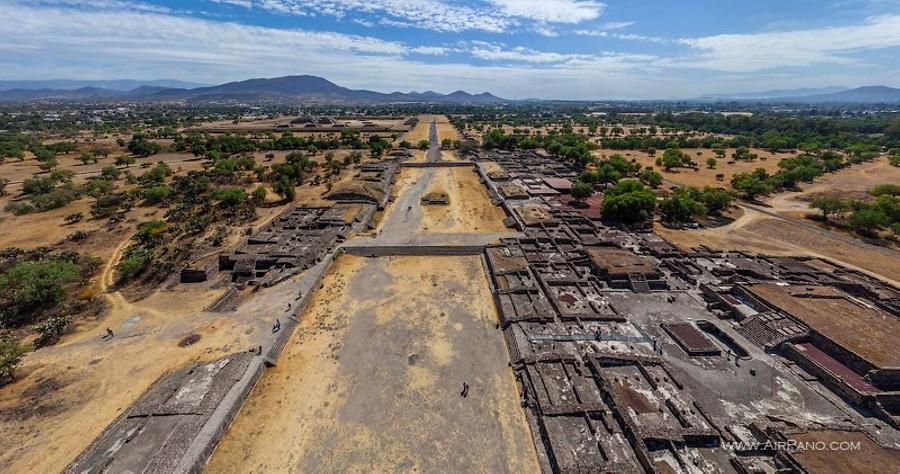 Avenue of the Dead

The giant five-tier Pyramid of the Sun is located on the east side of the avenue. It is 64 meters high; and the size of its foundation is 222 meters by 225 meters. The length of its foundation is only 3 percent smaller than the famous Great Pyramid of Giza in Egypt. It is accustomed in Mexico and Central America to build new temples on top of the ruins of the old ones. And, so the Pyramid of the Sun was built on top of what was left of the old structures until it reached its current size. The main construction work was probably finished in the 1st century A. D.; and the temple on the very top of the structure was created 300 years later. 248 steps lead to the top, and numerous tourists climb up them to reach the temple.

The Avenue of the Dead ends by the 42-meter-high Pyramid of the Moon. Sitting on a small hill, it is visually as tall as the Pyramid of the Sun. Atop the pyramid there is a platform that was used for ritual ceremonies in honor of Chalchiuhtlicue, the Aztec goddess of water and Moon. It is also accessible to the public; and there are numerous ritual burial sites surrounding the pyramid, just like every other structure in the city. 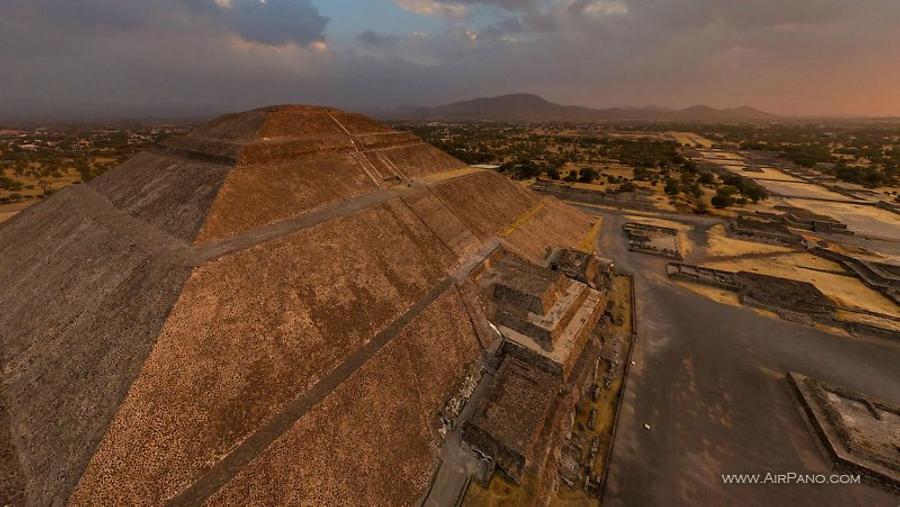 Pyramid of the Sun at sunset

Despite the fact that the ancient Teotihuacan still surprises archeologists with the new discoveries, there is not much known about the city. Although separated by thousands of kilometers, this architectural ensemble, created according to one master plan, mysteriously resembles the ancient Egyptian complex of pyramids and religious structures in Giza.

Due to unexplainable reasons, Teotihuacan was deserted in the middle of the 7th century, which was the period of its maximum prosperity. The Aztecs that came here much later found only the majestic ruins of the city: it was destroyed almost to the ground, all tombs and volts with ritual offerings were looted and sacred statues mutilated and broken. Even the original name of Teotihuacan is lost to us: the Aztecs gave the city its current name ("the City of Gods").

The only thing that is certain about Teotihuacan is that it is an amazing and mysterious landmark of Mexico; and it has been added to the UNESCO World Heritage list for a good reason. See it for yourself though our panoramas!