The Aztecs founded Mexico City in 1325 A.D. Spanish conquistadors led by the legendary Hernán Cortés conquered it two centuries later. In fact, the combination of ancient Indian traditions and young European ambitions is what makes the modern capital of Mexico unique.

Sights of Mexico City turned the capital into one of the most popular tourist destinations in North America. If put together, all of Mexico City's contrasts: high crime rate vs. hospitality of local residents, ultra modern skyscrapers vs. Aztec pyramids, slums vs. magnificent palaces, hills vs. plains — provide the city with a special unforgettable atmosphere. 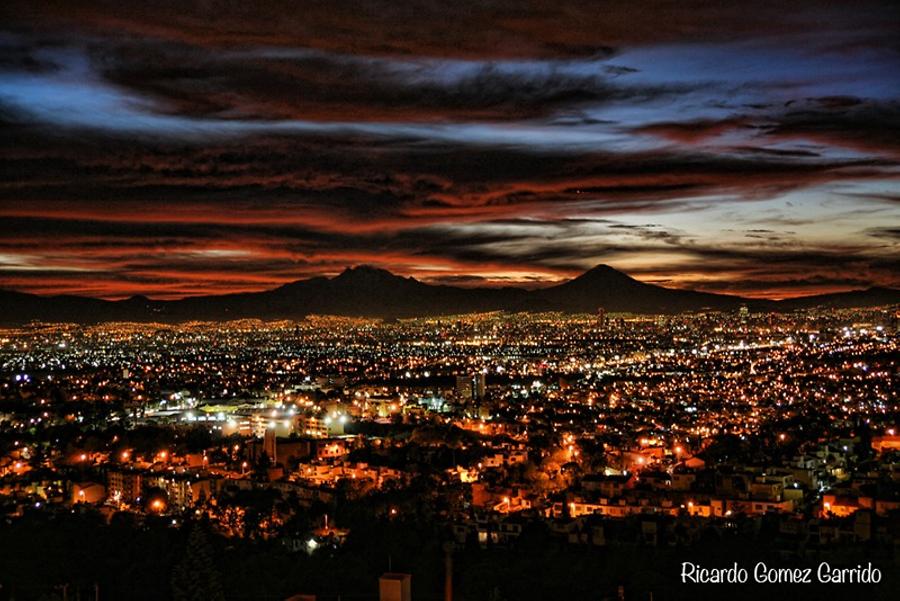 The Plaza de las Tres Culturas ("Square of the Three Cultures") is the best illustration of harmonious coexistence of past and present surrounded by the Aztec pyramid of Tlatelolco, the Colonial Cathedral of Santiago, and the modern building of the Ministry of Foreign Affairs.

The Metropolitan Cathedral of the Assumption of Mary, located atop a hill on the north side of the Plaza de la Constitucion (the Zocalo, Constitution Square), is one of the largest and most ancient (1573 A.D.) cathedrals in Colonial America. Its central nave measures 110 meters in length and 55 meters in width; it has 51 vaults supported by 74 arches and 40 columns. Together with the vestry and the National Palace, the cathedral forms a magnificent ensemble that combines Renaissance, Baroque, and Neoclassicism. 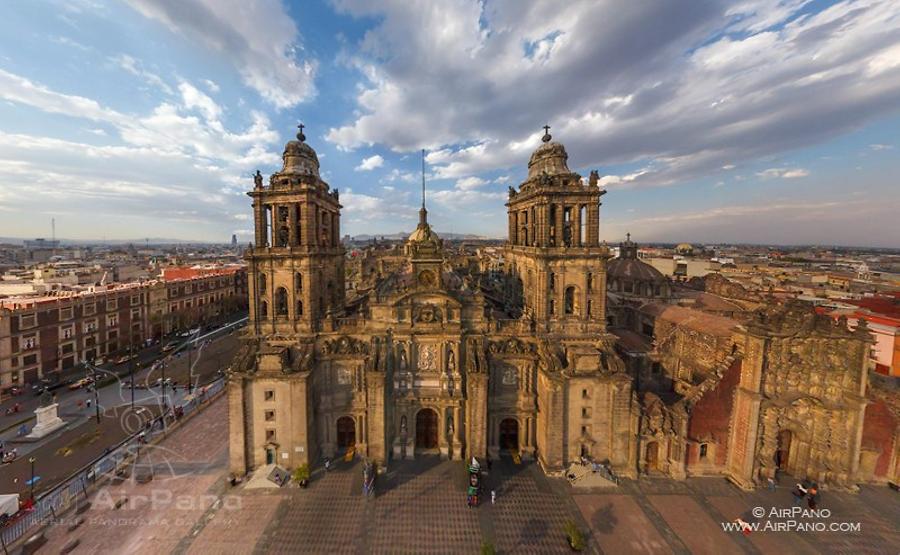 In the northern part of the city one can find famous Basilica of Our Lady of Guadalupe — one of the most important churches in the entire continent. The Basilica houses the original tilma (or the cloak) of Juan Diego, which holds the image of Our Lady of Guadalupe. It was the main reason for massive — and voluntary — conversion of pagan Aztecs to Christianity. The first church was built here in 1531 A.D., but after some time it couldn't accommodate everyone. In 1987 a new grand church that could accommodate 20 thousand people was built next to the old one. By the way, the Basilica is one of the most important pilgrimage sites of Catholicism visited by 14 million people every year, which is the highest number of pilgrims in the world.

Basilica of Our Lady of Guadalupe

Chapultepec Park (Bosque de Chapultepec) is the largest urban park in North America and one of the biggest in the world. Its territory surrounds the 2325-meter high Chapultepec hill in Mexico City. The park occupies an area of over 686 hectares, ranking with the Bois de Boulogne in Paris, the Imperial Palace East Gardens in Tokyo, and Central Park in New York City. Not only it could be considered the "lungs" of Mexico City, but it is also a concentration of numerous cultural objects, such as the National Museum of Anthropology. Upon entering the museum, visitors are "greeted" by an ancient artifact — seven-meter tall monolith depicting the Rain God Tlaloc in a form of a fountain.

On top of the hill there is a castle of the same name, founded in 1785 A.D. by the Spaniard Bernardo de Galvez. Former residence of the governors, emperors, and presidents of Mexico now serves as the main exhibition hall of the National Museum of History.

Modern landmarks of Mexico City are as ambitious and impressive as their ancient counterparts. The symbol of the city is the (El Ángel de la Independencia) that was built to commemorate the centennial of the of Mexico's War of Independence, which began in the year of 1810. It is a 36-meters high column topped with 6.7-meter high statue of a winged goddess of victory. In her outstretched right hand she holds a laurel wreath, and in her left hand she holds broken chains. The sculpture is cast in bronze and covered with 24-carat gold. 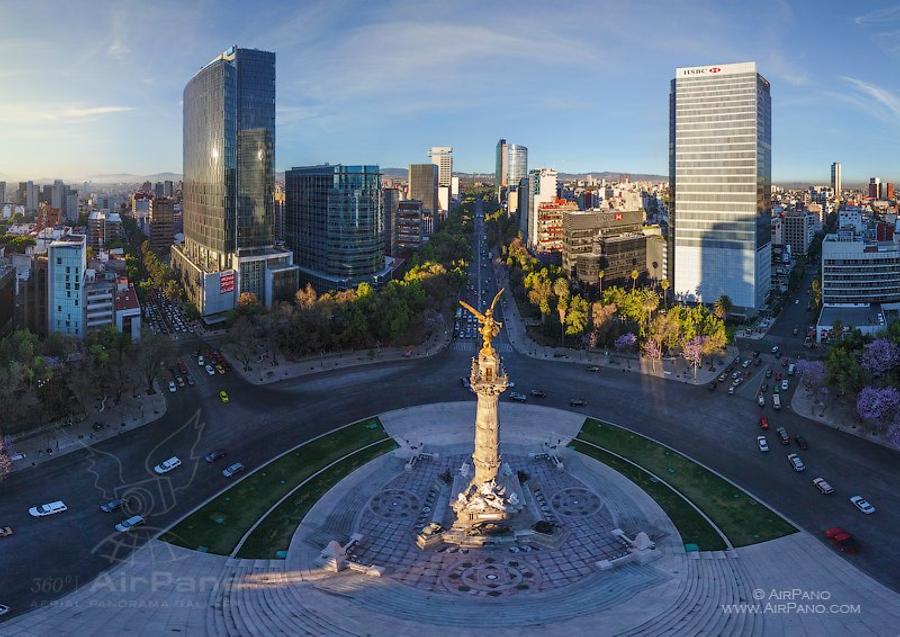 The most famous skyscrapers of Mexico City are the Torre Mayor ("Big Tower" in Spanish) and the Torre Latinoamericana ("Latin-American Tower"). 55-story Torre Mayor, which was built in 2003, has a height of 230 meters and considered to be the highest building in the city. 183-meter high Torre Latinoamericana was built in 1956. It is smaller in comparison to its younger counterpart, but it became famous after successfully withstanding earthquakes in 1957 and 1985. At that time 7.9 and 8.1 points earthquake destroyed many buildings in Mexico City, including the television tower. The Torre Latinoamericana survived and became a symbol of security of the Mexican capital. 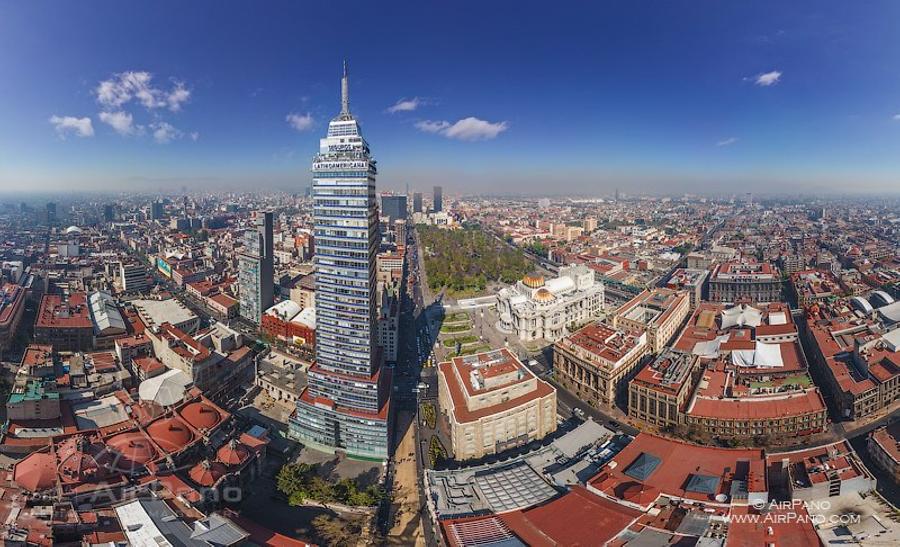 We can talk about Mexico City endlessly: a fusion of cultures is combined with an elegance and grandeur creating a unique story for each and every building in the city. But as they say, a picture is worth a thousand words — please, enjoy the magnificent scenery of Mexico City through our panoramas!

And now let me turn the floor over to Stanislav Sedov, who will share some of his impressions about the trip.

We would like to tell you a short story about our trip to Mexico while the memories are still fresh in our minds. Maybe some of you'll learn something useful.

As soon as we'd finished shooting Tikal in Guatemala, Dima and I decided to go to Mexico.

We started off our journey on the wrong foot. The bus that was supposed to take us to Chetumal in Mexico arrived two hours later at 8am. And it seemed that Dima's perfect trip plan started falling apart. 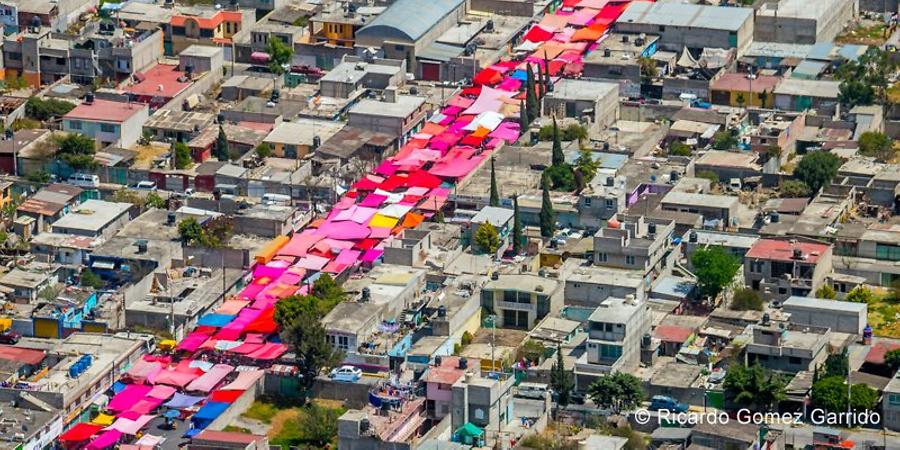 It all went downhill from there. In order to reach Chetumal from Guatemala you have to pass a small country — Belize. There is nothing special about it, just another former British colony. Probably because of this reason it's one of the few countries in Central America where Russians need to get visa to cross the border. And only British Embassy grants this visa in Moscow.

Dima found some travel website that stated that if you have a U.S. visa, then there'll be no problem getting Belize visa on the border in 20 minutes.

A couple of hours later we reached the border. There were no incidents when we left Guatemala. We filled out necessary forms and handed them over to Belize border guards. After that we sat waiting under the shed with a proud name "Immigration point". Of all the people on the bus the only one getting visa, beside us, was a Korean girl. All other white people crossed the border without any problems. 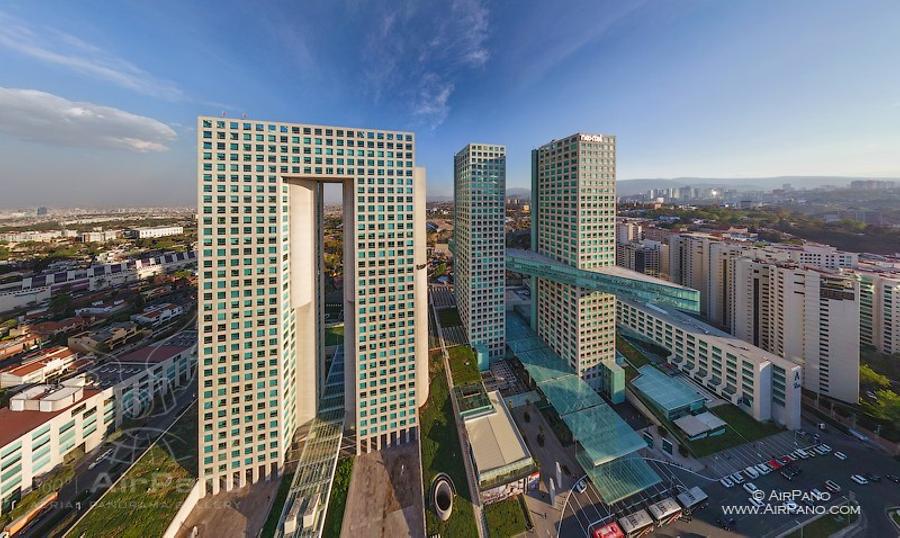 An hour and a half (!) later an officer came out and said that everything was alright, and that we would get our visas in 5 minutes, as soon as they get a response from the capital.

40 minutes later the Korean girl got her visa. We were told to wait because they couldn't get through to the office, because of holidays and other unknown reasons.

Half an hour later our bus driver came up to us and said that he couldn't wait for us any longer. We couldn't blame him, because temperature outside was about 40 degrees Celsius, and passengers were almost ready to kill both him and us. So the bus left and we continued waiting while haveing fun in a warm and friendly environment. We saw the border guard running past us and telling us that they were able to get through to the office, and that our visas would be ready in 5 minutes, etc. Yeah, right.

Then one and half hour later (by that time we spent 4.5 hours on the border) we were approached by a man, who introduced himself as a police officer and took Dima with him to talk about why the hell we decided to go to Belize in the first place.

Dima was gone for 5 minutes and then came back with a pale face: he said there was a problem. He took our Mexico shooting permit, and disappeared for 40 minutes. I was about to call the Embassy (my wife texted me the phone number), but then I saw Dima approaching me with a nervous smile on his face. He said they mistook us for drug traffickers: we had too many stamps in our passports, we traveled a lot, and looked very suspicious. It turned out that it was police, not the border guards, that were running background check on us. And it took so much time, because they were waiting for resoponse from Interpol.

By the way, the police officer finally believed in our story only when I showed him the picture on my phone, the one that Dima took of me and our helicopter in front of the Tikal pyramid.

Only then he apologized and said that he thought we were Russian mafia. 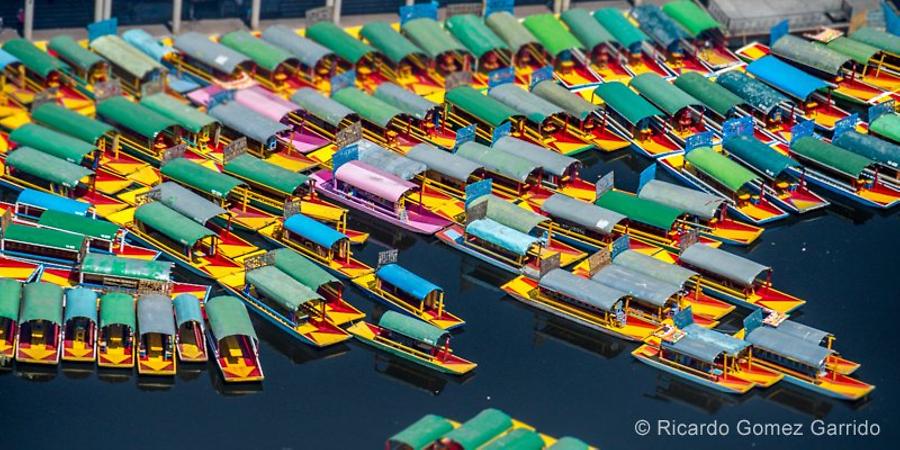 Boats in the harbor

After that we got our visas in 20 minutes. When we reached customs (the next cordon after the border guards) and told customs officers how we waited for our visas for 5 hours, and that our bus left us behind, they gave us a sympathetic look and said, "Go ahead, we're not going to check your bags." And we finally entered Belize.

After that it was easier: we took a taxi. It took us 4 hours and costed $250 to drive through the country from one border to another. The second border was way more simple than the first one. The only problem was that we had to walk from Belize post to Mexico (and it was quite a distance), but we were lucky enough to be picked up by the bus headed in the same direction. 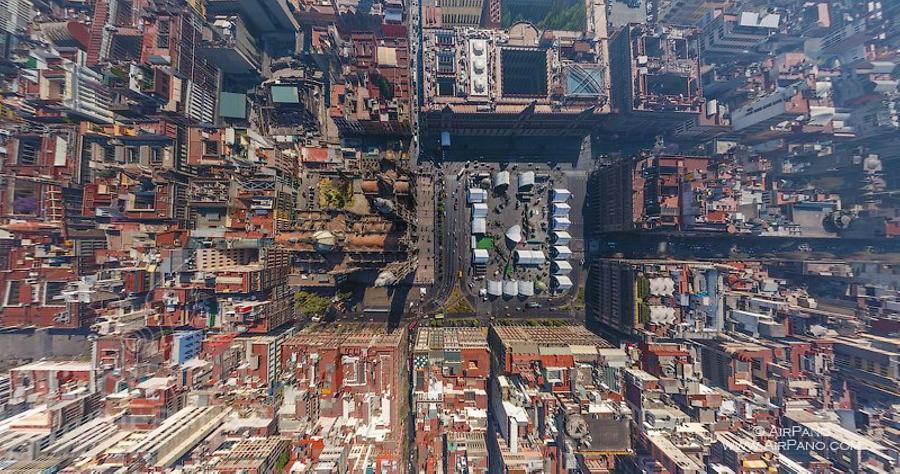 The Cathedral and the Constitution Square

We crossed the Mexican border without any problems. Customs officer checked my bags, but our photo shooting permit made everything easier and we were done in no time at all. We took a taxi when we left customs. We arrived our hotel past midnight, as we were falling off our feet, so we went to bed right away.

On a personal note, we would also like to say a few words about local hospitality. Out trip to Mexico wouldn't happen without help of Ricardo Gomez Garrido, a pilot and a photographer from Mexico City, and his friend Diego Ruelas Tiscareno from www.fotoaereamexico.com team. First of all, Ricardo helped us with obtaining photo permits for all Mexican historical monuments and pyramids. As we learned down the road, there would be no photo shoots without those permits. And secondly, the friends arranged a warm welcome for us in the capital, helped us with the transportation, and found us a helicopter for our photo shoots. Checking in to the downtown hotel, we were pleasantly surprised to see aerial photographs of Mexico City taken by Ricardo and Diego exhibited in the hotel lobby.