Photo and text by Stanislav Sedov and Dmitry Moiseenko, members of the AirPano Team that is a member of the global-geography Consortium.

People often ask us how we manage to get photo permits in different countries. The answer is good luck and persistence!

Before arriving to Guatemala, Dmitry and I had no idea how to get a photo permit for Tikal. We learned from our experience in Machu Picchu that we should look for the right people in the capital, not in the national park. Just like in the rest of Latin America, Guatemalans speak Spanish. And they seem to be completely unaware of existence of other languages. That is odd, because considering their proximity to the USA, they could have been a little bit more cosmopolitan.

Struggling on our first day with a driver, who understood only gestures, we found an agency where, after long negotiations, we met the only English-speaking guide in the entire capital (soon after publication of this article we were contacted by representatives of the Institute of Tourism. They told us that we could have found English and even Russian speaking tour guides through their organization. We've just gone to a wrong place). Our guide's name was Angel. Fortunately for us, he turned out to be a former employee of the Ministry of Culture. Angel listened to our request very carefully and then suddenly turned away from the planned route and took us somewhere else, not where we wanted to apply for a photo permit at all. As it turned out, he was right. Thanks to our guide's persistence, things moved along very quickly: we found the right officials, stated our request, and after a half-hour conversation they decided to help us. Instead of standard two-weeks period, they promised us to consider our photo permit request within a day. Only the price was way beyond what we could ever afford. After our persistent requests to bring down the price we were pointed in the direction of the Institute of Tourism to see if they could do something for us. 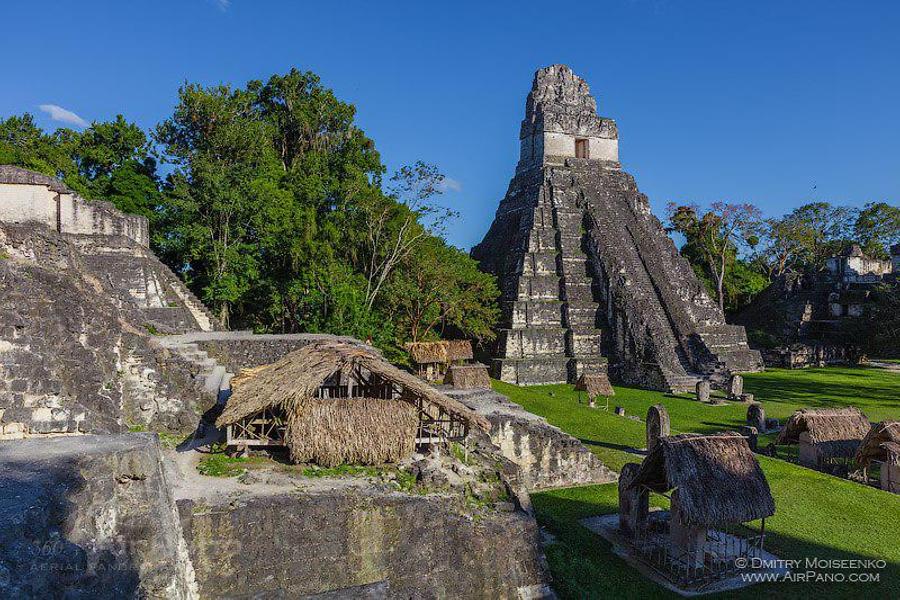 Young employees of the Institute of Tourism carefully studied AirPano website and became so interested in promoting local landmarks through our website that they decided to lend us some of Guatemalan budgetary funds to cover the cost of photo permit. Honestly, that has never happened to us before!

The following evening we were on a bumpy road to Tikal. All required paperwork was in Dima's backpack.

Shooting of Tikal pyramid went very smoothly. The park administration assigned us a guide, and we went on with the usual shooting routine: three days of running in the dump hot jungle, catching sunrays between the clouds; takeoffs and landings, and tourists staring at us. 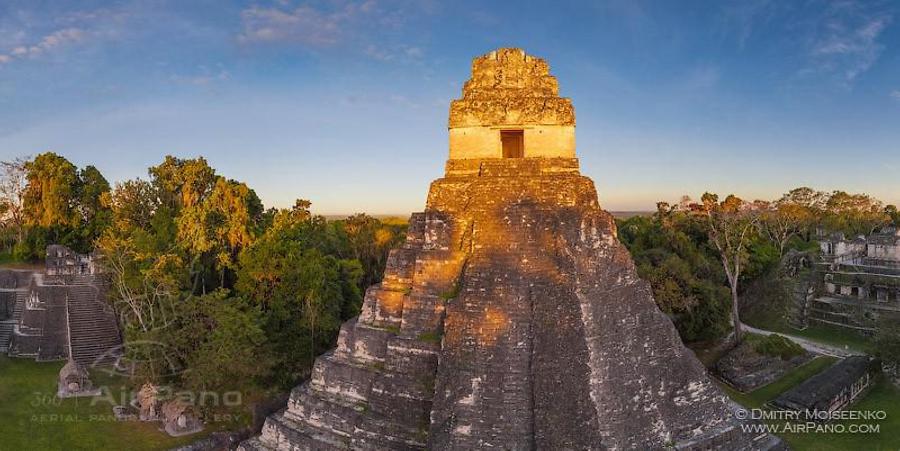 I remember a few moments of those three days. During one of the breaks between flights, we were lucky enough to see a green tree snake hunting a bird on the outskirts of the central square. The snake was spotted by a photographer-guide, whom we met the day before. I still don't know how he noticed it: the reptile practically blended into the surrounding grass. This excellent camouflage allowed the snake to sneak up on a bird and wrap around it in a deadly grip. This is how we found them: the bird was still alive, as the snake was not strong enough to strangle it right away. I wanted to help the bird, but our guides did not allow it, explaining that it's better not to intervene. 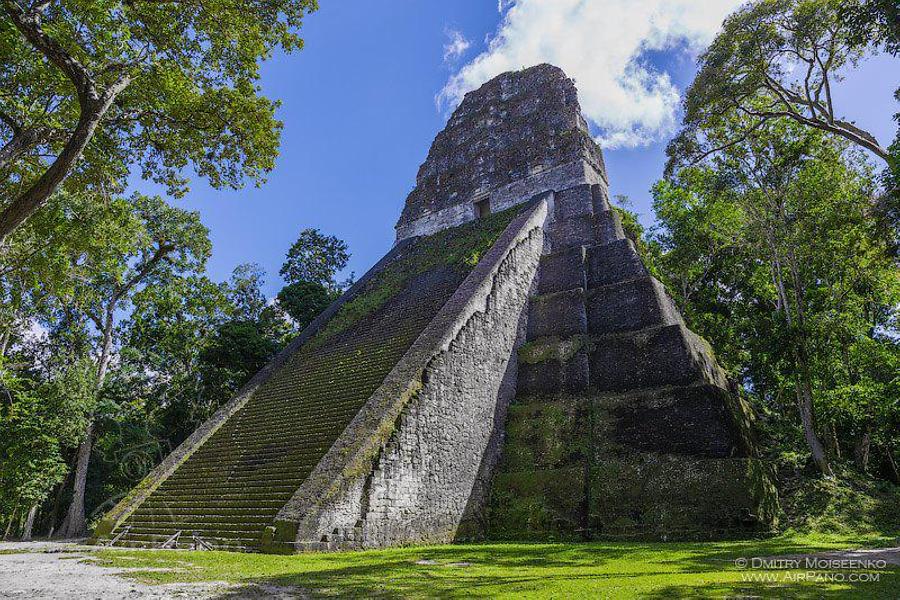 But let's look on the bright side! One of our most vivid impressions of visiting Tikal came from climbing to the top of Temple IV. If you ever have the chance to visit the park, be sure to climb to the top of this temple! It is the farthest one from the entrance (about 40 minutes walk along the shortest path) and hardest to climb, because of its steep stairs, but it's definitely worth it! There is a stunning view of endless sea of ??jungle from the top! Just be silent! Don't talk loudly! Let the sounds of jungle surround you and cut you off from the rest of the world. If you are as lucky as we were, you will be able to hear the chirping of birds, and the roar of monkeys, which can easily be mistaken for a predator roar.

The first Maya settlements were established on the continent of North America around 2000 BC. This ancient civilization greatly influenced the history of mankind with their writing, art, architecture, mathematical, and astronomical systems. And then it went into decline, leaving behind not only its cultural heritage, but also many questions and mysteries.

The modern Maya people, who live in Mexico, Guatemala, and Honduras don't have such amazing inventions, but cherish their ancestors' heritage. Tikal is one of many monuments of the Maya that survived to this day and one of the largest cities located in the province of El Peten in Guatemala. It is also a part of Tikal National Park.

The name Tikal, which in means "the place of spirit voices" Mayan language, appeared in the 1840s when Europeans discovered this area. Perhaps this monumental abandoned complex, full of shadows and memories of past greatness, made explorers tremble in awe, and native Indians, descendants of the ancient Maya, decided to strengthen this impression by giving this place an appropriate name.

In fact, long before its decline, Tikal has been known as Yax Mutul, that is how it's referred to in hieroglyphic inscriptions. The strange name is explained by the fact that from 1st to 9th century Tikal was a capital of the Mutul Kingdom. This large city occupied the area of ??60 square kilometers with hundreds of stone structures.

Not all of the structures have been excavated yet! Currently, the cleared area of ??the ancient city covers only 16 square kilometers, but there is a lot to see there (no wonder UNESCO included Tikal in its World Heritage List). There are six step pyramids in the center, each with a temple on the top. In the past the complex housed various palaces, the Acropolis, funeral ritual grounds, and even a prison. 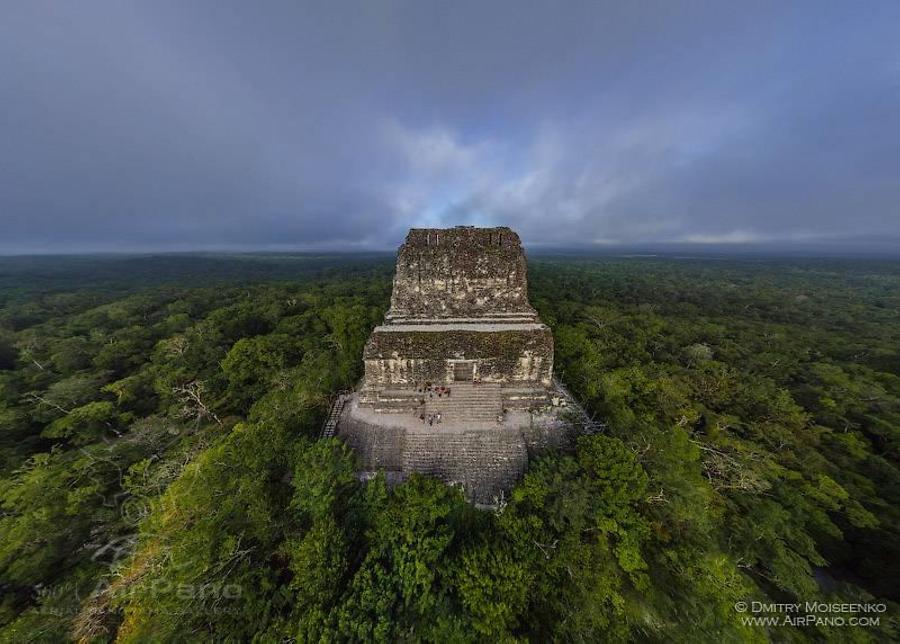 Frame from the movie «Apocalypto»
© AirPano 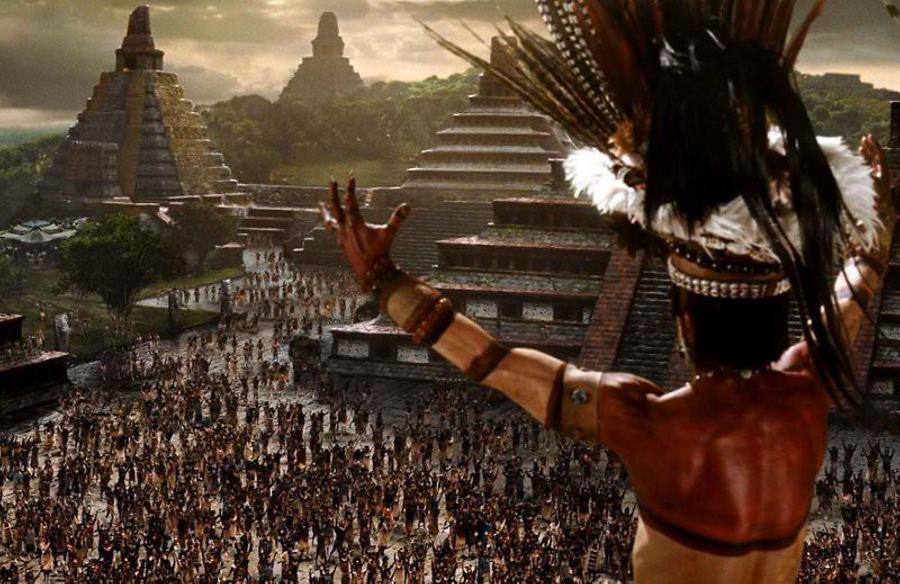 Frame from the movie «Apocalypto»
© AirPano

Temple IV, which was built in the middle of the 8th century, is hidden somewhere on the outskirts of discovered area. However, "hidden" is not the right word. Temple IV, also known as the Temple of the Two-Headed Serpent, is 64 meters high and is considered to be the tallest structure in Tikal.

The city reached its apogee in 600 to 800 AD, and, according to some studies, its population during that period could have been 100,000 people. But at the end of 10th century, for unknown reasons, Tikal suddenly went into decline and was engulfed by the surrounding jungle. However, the Maya were known not only as prominent scientists and architects, but also as bloodthirsty and courageous warriors. Mutul Kingdom had a long and complicated history full of military victories and defeats. The disappearance of entire nations was quite typical of the ancient times.

It is interesting that even now Tikal managed to become an arena for military operations: the cult movie Star Wars was filmed here; in Episode IV (1977) the rebel camp was situated on the territory of Tikal.

In December 2012, during the celebration of Mayan "End of the World", the ruins of Tikal became one of the most important destinations for thousands of tourists from all over the world. The park management arranged various colorful ritual ceremonies, and some tourists even climbed up to the top of the pyramid to fully enjoy the show, despite of the fact that it is strictly prohibited. As a result, some structures suffered irreparable damage.

However, it takes more than that to take down the majestic Tikal that survived ten centuries of rich history and ten centuries of desolation. We invite you to fly over these incredible monuments of ancient civilization, witness their strength, and imagine many treasures yet to be discovered by Tikal explorers!