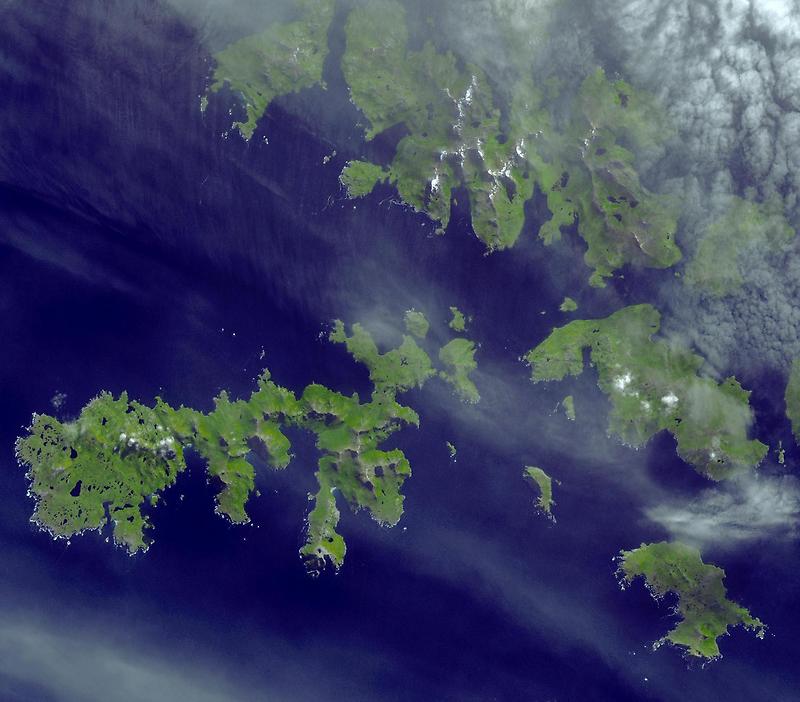 Photo courtesy of NASA., under PD
The southern tip of South America tapers off into a collection of rugged islands known as Tierra del Fuego. The southernmost headland in this archipelago (group of islands) is Cape Horn. Before the completion of the Panama Canal, ships had to "round the Horn" in order to move goods or people from the Atlantic side of North and South America to the Pacific.

The area is notorious for its sailing hazards: strong winds, large waves, and icebergs drifting up from Antarctica. This satellite image shows some of the islands at the tip of South America, including the Wollaston Islands (top right) and the Hermite Islands (center). Cape Horn sits on one of the Hermite Islands, Isla Hornos.

Precipitation is abundant in the area, and the islands are lush with green vegetation except at high elevations, where bare rock appears to be exposed. Small lakes (easy to confuse with shadows) are scattered across most of the islands. A veil of thin clouds hangs over much of the scene, and bright white snow stands out on the east-facing summits of the mountains on the Wollaston Islands.