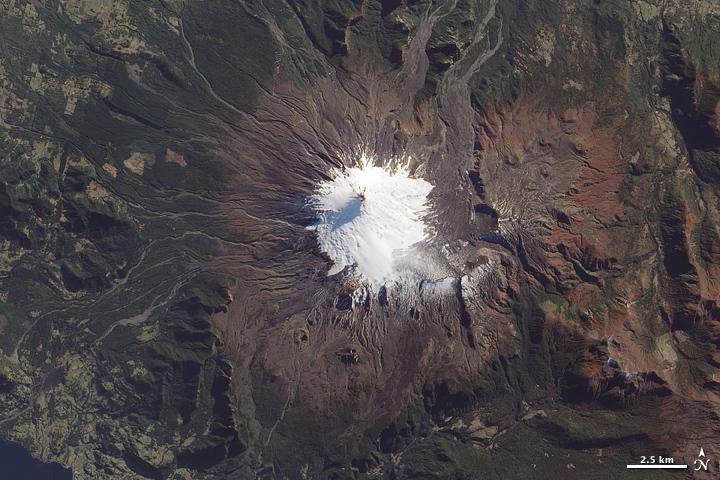 Image courtesy of NASA., under PD
Near the southern tip of South America, a trio of volcanoes lines up perpendicular to the Andes Mountains. The most active is the westernmost, Volcan Villarrica Volcán Villarrica, Panguipulli, Chile , pictured in this photo-like satellite image.

The 2,582-m (9,357-ft) stratovolcano is mantled by a 30-sq km (10-sq mi) glacier field, most of it amassed south and east of the summit in a basin made by a caldera depression. To the east and northeast, the glacier is covered by ash and other volcanic debris, giving it a rumpled, brown look.

The western slopes are streaked with innumerable gray-brown gullies, the paths of lava and mudflows (lahars). Beyond the reach of ash and debris deposits, the volcano is surrounded by forests; the area is a national park.

The largest recent eruption occurred in the early 1970s; lava flows melted glaciers and generated lahars that spread at speeds of 30-40 km per hour (20-30 mph).