By now we have photographed the majority of famous waterfalls of the world: Angel Falls in Venezuela, Victoria Falls, located on the border of Zambia and Zimbabwe, as well as Iguazu Falls in Brazil and Argentina. Today we'll bring you our virtual tour over Niagara Falls.

We have already made an attempt to shoot Niagara Falls from a regular helicopter but we failed. Unfortunately, our pilot refused to fly to the waterfall closer than a few kilometers despite of our approved flight plan. And now, thanks to our colleague Nick Ivanov from Canada, we have a chance to show you Niagara Falls from a close range.

Here are a few facts about Niagara Falls.

At the place where North American Niagara River separates two of the Great Lakes, Erie and Ontario, nature created a magnificent cascade of waterfalls. Each waterfall has its own name: the Horseshoe Falls, the American Falls, and the Bridal Veil Falls. However all of them are known under one name — Niagara Falls. This is the most important landmark of the USA and Canada at the same time, as it separates one country from another. 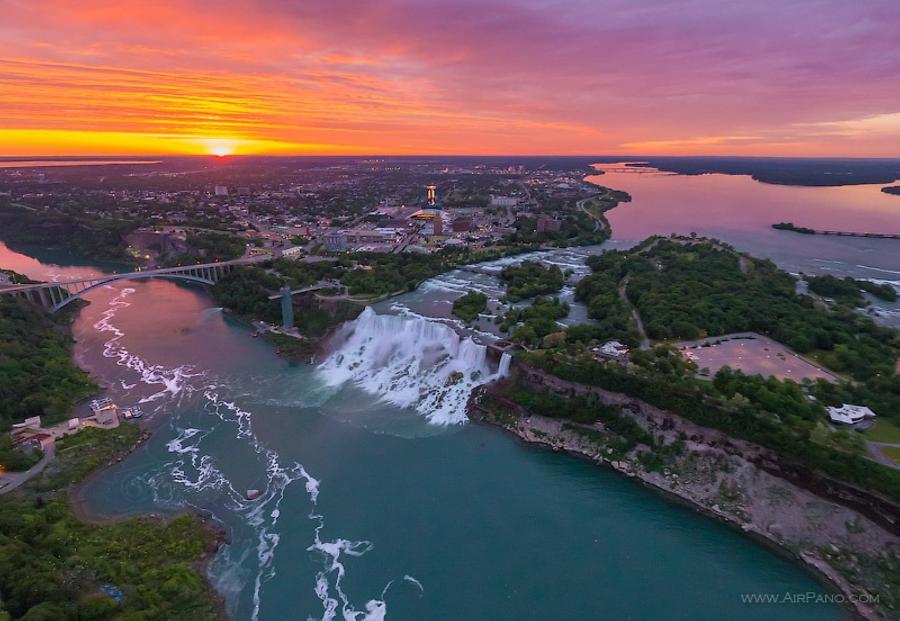 Great Lakes of North America, Niagara River, and its waterfalls are results of shifting of an ice shield that moved down from the Eastern Canada territory over ten thousand years ago. The glacier crashed everything on its way, deepening and widening riverbeds, and creating or eliminating lakes.

Interestingly enough, the geological characteristics of the area are such that the layers of soil are still moving, even if their movement is not as dramatic any more. During past centuries Niagara Falls have moved eleven kilometers south. According to scientists, the waterfall has been moving with the average speed of one, one and a half meters per year during last 560 years. Today special engineering efforts managed to slow the shifting a little bit. 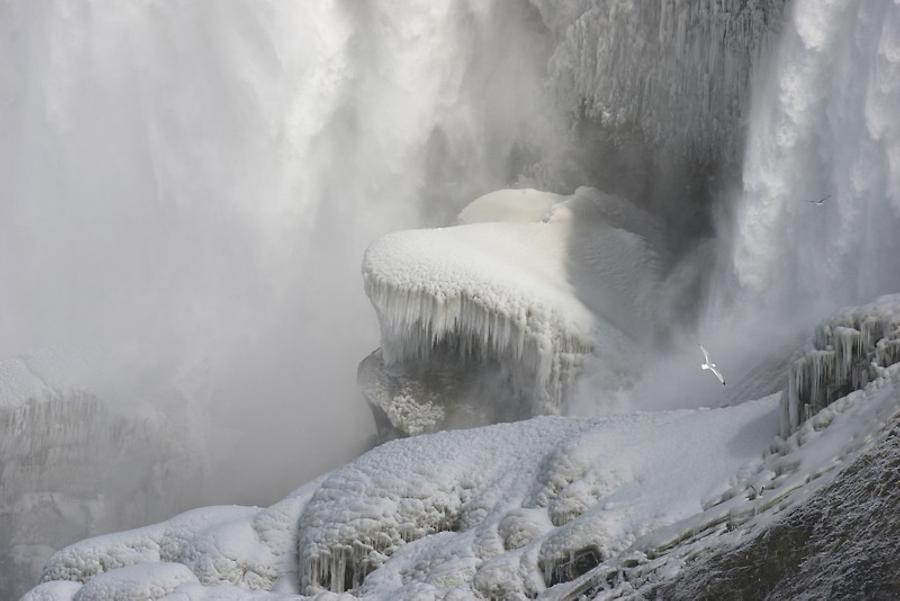 On the international scale Niagara Falls is not that high — just 53 meters. Here are few numbers for comparison: Angel Falls in Venezuela drops its water from 807 meters, and Victoria Falls in Zambia and Zimbabwe is 108 meters high. However the width of Niagara Falls is 792 meters. This fact places it together with the widest waterfalls in the world (comparing with Angel and Victoria — 107 and 1800 meters respectively).

These numbers demonstrate how different a waterfall can be. Every one of them is unique. It is also true for the waterfalls that form the Niagara Falls complex. 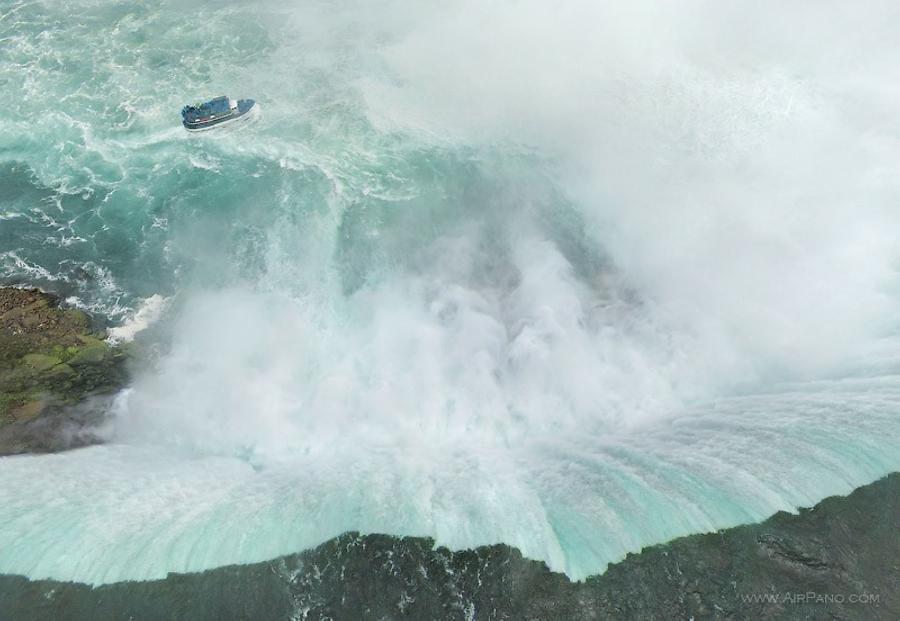 A small island called Luna separates the American Falls and the Bridal Veil Falls (that truly looks like a bridal wear). Their combined width is about 335 meters. At the same time, there is a giant pile of large sharp rocks at the foot of the American Falls, which makes a visible part of the waterfall 21 meter high. 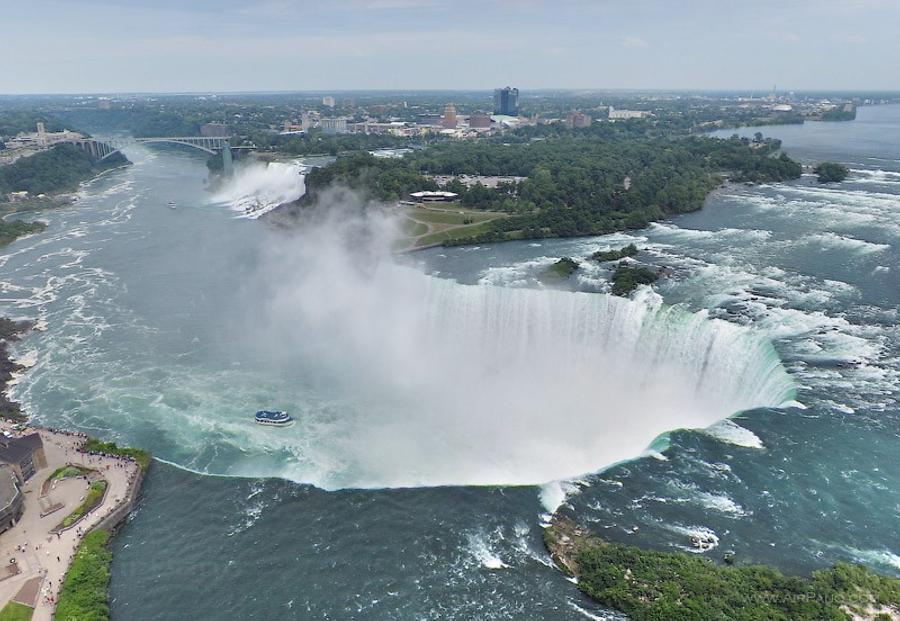 Named after deceased herd of artiodactyls, Goat Island is a popular tourist destination as it offers an opportunity to enjoy a spectacular view and also to take pictures of Niagara Falls. Little bridges connect the island with the US mainland and neighboring Luna Island. The Cavern of The Winds, another Niagara attraction, is also located here. From inside the cavern, one can admire the waterfall up close and also feel the power and presence of the big water. And when we say "power" we really mean it — drops of water shower you from head to toe! This is why each tourist receives a raincoat and waterproof footwear at the entrance to the cavern.

Niagara Falls attracts not only millions of tourists, but also those who want to experience extreme sensations. In 1829 Sam Patch became famous as a first man, who jumped from the Horseshoe Falls and survived. Another so-called record was set in 1901 by a 63-year-old Annie Taylor, who went over the waterfall in a barrel. The event of 1960 is rightfully called "The Miracle of Niagara", as a 7-year-old boy accidentally fell down the Horseshoe Falls and survived. Unfortunately, raging waters of Niagara Falls also took many human lives... 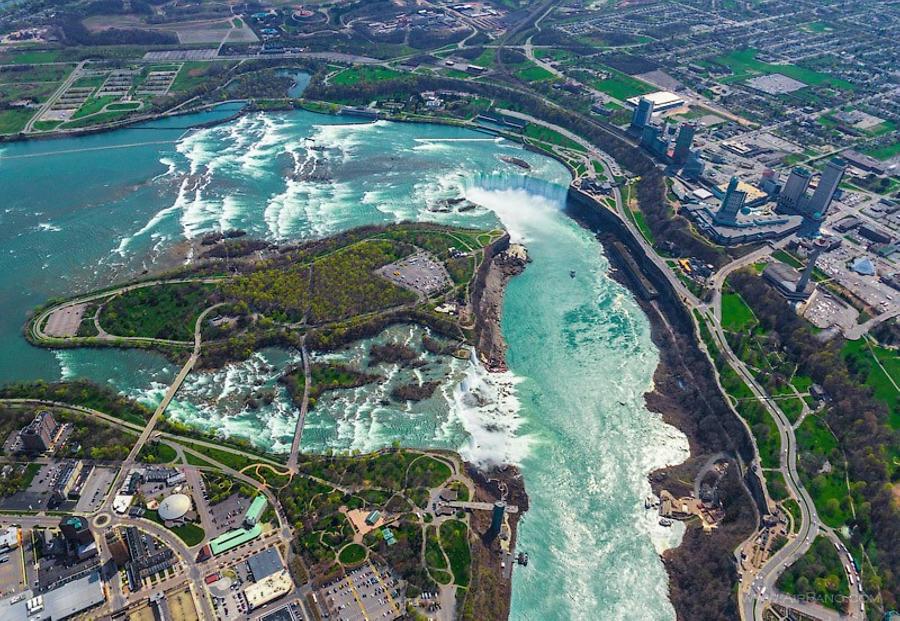 Niagara from the altitude of 500 meters

Location and position of Niagara Falls doesn't allow a group view of all the waterfalls from one spot. Some people believe that the most spectacular view opens from the Canadian shore; those who travel to Niagara Falls on American side are also satisfied with the picture. And now you have an opportunity to enjoy the magnificent panorama of all waterfalls from the widest possible angle — a bird's eye view — without a risk of getting wet or falling down the stream.