After we got accustomed to Rio, my friend Dima and myself decided to visit the Corcovado hill, one of the city's main attractions, with world-famous statue of Christ the Redeemer on the top.

We couldn't get there by car so we had to load all our equipment on the bus. The usual story followed after that: security at the entrance wouldn't let us on the premises unless we had a photo permit from the park's administration. An attempt to take off from the bus stop was also stopped by guards. There were no other places near the statue from which we could take off so that day we couldn't shoot anything. 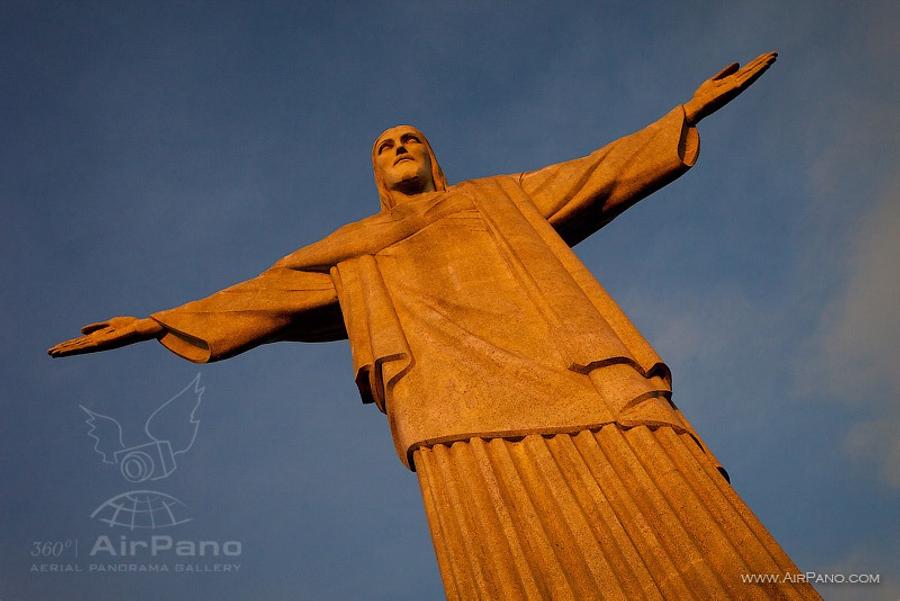 After we found out the address of the park's administration we immediately rushed in that direction. But we had to look for this address for a long time because there was no exact location on the map. Finally, with a help from local residents, we found our way. It was a very beautiful place: high up in the mountains in the heart of the national park. Surprisingly, we couldn't get any cell service in the area; instead, we had a very good connection via free WiFi.

I'd rather skip the details of our conversation with the administration representatives. Basically, they had nothing against us taking pictures of the statue, but at the same time they couldn't allow the photo shoot without getting approval from the church first. For some unknown reason, the church also couldn't give such approval on a short notice. So after a day of worthless struggle we returned to the hotel without any permits or documentations.

The next day Dima rented a large helicopter to take pictures of the Christ statue. In the evening, without any hope for a positive answer, we decided to call the park's administration. And a miracle happened! An employee in charge of our case was able to get a photo permit from the church representatives. We were allowed to take off from the base of the statue!

The next morning we got up before dawn. It was still dark when we drove up to the bus parking space. Guards at the gate had been warned to let us in on our own transportation.

But as we climbed higher up the hill the expression on our faces gradually changed from happy to gloomy: the top of the mountain was covered by thick fog. All the way from the parking lot to the observation desk we were surrounded with "milky fog". On the way up we met another group of people who were making a film about Rio.

We spent all this time in agony while waiting to see if the fog would clear away. It would have been such a shame to fly halfway round the world, spend so much effort to get here at dawn and not to shoot anything because of heavy clouds.

But we were lucky: during sunrise the wind blew from the ocean and gradually cleared the fog away from the hill, leaving behind fantastic colors. Suddenly a huge heavy cloud floated above our heads became brightly coloured in orange. Dima shouted: "Urgent take off!" And we were on our way!

Over the last year I've seen many amazing sunrises, but I haven't seen so many colors at the same time. Color extravaganza lasted for about 10 minutes. During that time we managed to make 2 short take offs, the results of which you can see in our virtual tour.

And now we would like to give you some interesting facts about Christ the Redeemer Statue:

Each great city has its own landmark. Eiffel Tower in Paris, The Statue of Liberty in New York, Opera house in Vienna, and majestic Kremlin towers, famous Moscow landmark. But today we want to tell you about the statue of Christ the Redeemer (Cristo Redentor) in Rio de Janeiro.

On a 700-meter high Corcovado mountain stands a giant figure of Christ, his arms are stretched out towards the city, as if blessing the land. Each year, nearly 2 million tourists and residents climb to the top of the mountain to take a photo besides the monument "for good luck." 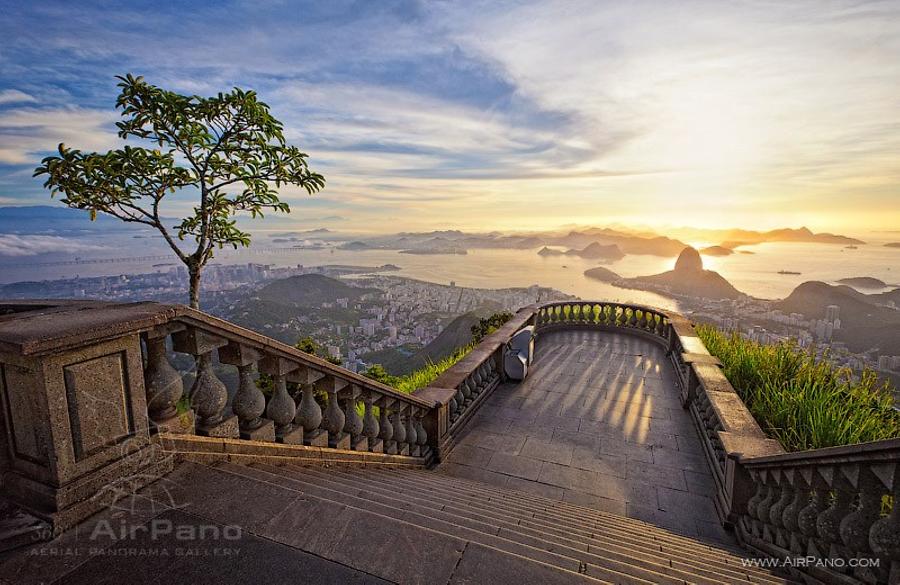 The exact dimensions of Christ the Redeemer statue in Rio de Janeiro are as follows: the height of the figure is 38 meters, the height of the pedestal — 8 meters, weight — 1145 tons, arm stretch — 30 meters. It is believed that the idea behind ??the creation of the statue came up in 1922, on the 100th anniversary of Brazil's independence. It appears that the story of the statue goes with its roots deep in the past.

Back in 1859 a Catholic priest Pedro Maria Boss was struck by the majestic beauty of the mountain of Corcovado while visiting Brazil. It was he who proposed to build a monument to Christ on top of the mountain. But at that time his aspirations were hard to accomplish: first the Brazilian Court had no money, and then the monarchy was replaced by the republican government. And since the church was legally separated from the state, the idea of building a monument was forgotten.

The mountain was too striking to be empty, and in the XXth century Catholic organizations of Rio de Janeiro raised the issue again. Signatures were collected, funds were raised and, as a result, this ambitious project was able to get more than 2 million reals ($250,000), a huge amount of money for that time.

Administration of Rio de Janeiro announced a competition for the best design, which attracted a lot of contenders. The winner was Heitor da Silva Costa. He proposed that the posture of Jesus Christ with the arms stretched to the sides would symbolize a cross, and a massive pedestal would symbolize the globe. Thus, the sculpture serves to give people one thought — "Everything is in God's hands."

The final design of the monument was done by artist Carlos Oswald. By proposing a number of corrections, he rejected the idea of a globe. And then, finally, everything was ready for the monument to be built.

The construction lasted for about nine years. For several reasons, first and foremost technological ones, the creation of a giant statue in Brazil at that time was impossible, so all parts, including the frame, were manufactured in France. 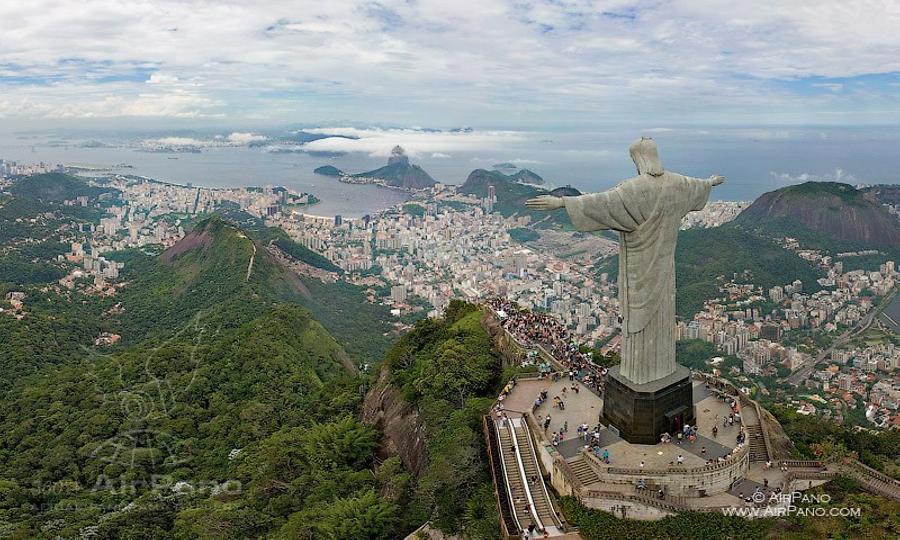 Disassembled parts were delivered to Brazil, and then transported by rail to the top of Mount Corcovado. The opening of the monument took place in October 12, 1931. This date is considered to be the "birthday" of the statue of Christ in Rio de Janeiro and is annually celebrated with a lot of festivities.

The statue was repaired twice — in 1980 and 1990, and in 2010 it underwent some cosmetic restoration: it was vandalized with strange inscriptions, such as "when the cat's away, the mice will play" (the meaning of this act remains unclear to this day).

In 1932 and 2000 the system of nighttime illumination was upgraded. In 2007, this famous Rio de Janeiro landmark was chosen as one of the Seven New Wonders of the World. 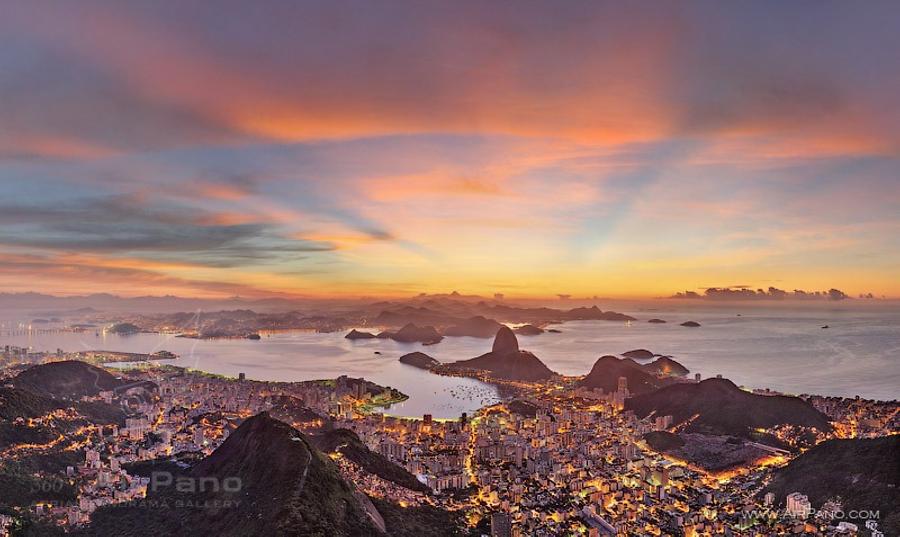 The statue can be reached by electric train or by mountain road. While being driving to the statue, you can't stay away from the window even for a second because Brazilian nature is so picturesque. Observation desks offer astonishing views of Rio de Janeiro: the famous beaches of Copacabana and Ipanema, "Sugar Loaf" mountain, the Tijuca National Park, the Atlantic Ocean and the Guanabara Bay with a town at the base of the bay.

Not to sound vain, please take a look at this breathtaking sight with the help of our virtual tour.

12 Panoramas of Christ the Redeemer Statue