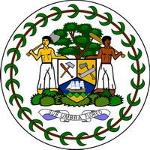 Belize was the site of several Mayan city states until their decline at the end of the first millennium A.D. The British and Spanish disputed the region in the 17th and 18th centuries; it formally became the colony of British Honduras in 1854. Territorial disputes between the UK and Guatemala delayed the independence of Belize until 1981. Guatemala refused to recognize the new nation until 1992 and the two countries are involved in an ongoing border dispute. Guatemala and Belize plan to hold a simultaneous referendum, set for 6 October 2013, to determine if this dispute will go before the International Court of Justice at The Hague. Tourism has become the mainstay of the economy. Current concerns include the country's heavy foreign debt burden, high unemployment, growing involvement in the Mexican and South American drug trade, high crime rates, and one of the highest HIV/AIDS prevalence rates in Central America.