Back in spring, we published our first virtual tour of the capital of Argentina. Now, we introduce the second virtual tour, which includes panoramas of the town of La Plata in Province of Buenos Aires.

The idea of creating panoramas of the capital of Argentina, Buenos Aires, occurred to us when we were discussing plans concerning our Antarctic expedition. But my luggage with the equipment had been lost during my connection in Barcelona, so instead of taking pictures of the city I was just walking around and going sightseeing.

To my deep relief all my cases had been found, and our Antarctic expedition was successful. But the shootings of Buenos Aires had to be postponed for two weeks and to be done on my way to Moscow. 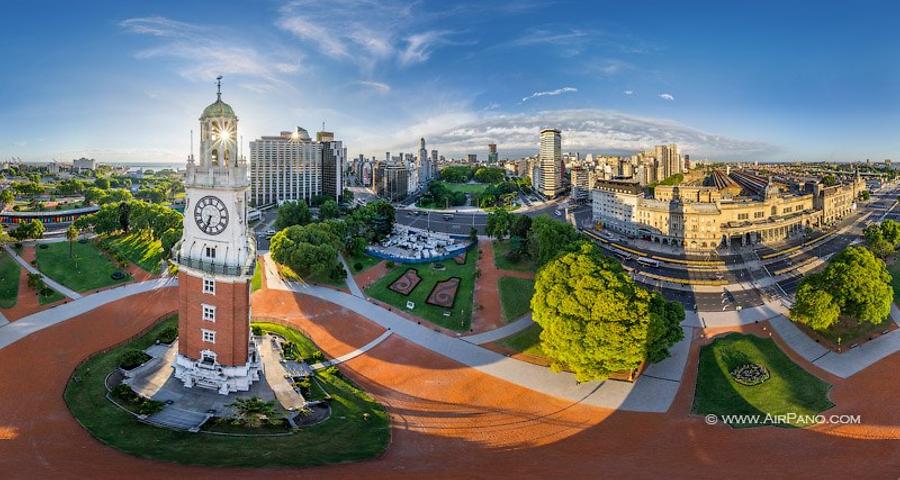 So, on a sunny December evening my airplane landed in the Jorge Newbery International Airport. After the cold lands of Antarctica, Buenos Aires greeted me with 30C° heat. I could feel the difference even in an air-conditioned airport terminal. Having said "goodbye" to the members of our expedition, I stepped over the porch of the airport into the heat of the evening city.

Before going to Buenos Aires my friends and local guides, I kept in touch with, warned me that criminal activity in the city is rather high. I had an impression, according to their words, that practically every citizen of Buenos Aires at least once was mugged, robbed or took part in a robbery himself. 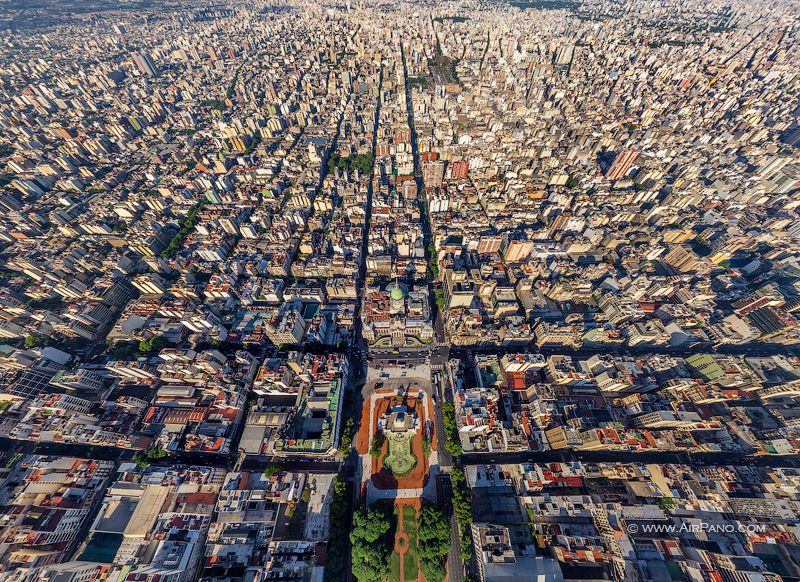 In our travels, we often visit some insecure places and local guides usually tend to exaggerate the danger. That was why I did not take the stories about robberies in broad daylight so serious. But 5 minutes later, being in a traffic jam on my way to the hotel, I heard a horn of a taxi going by. A bit later I realised that it was addressed to me in particular. Having raised my head I saw a driver pointing to my cellphone and making rather energetic gestures which I understood as "Lock your door, fool!" To be honest, I was really impressed.

The morning of the very first shooting day our drone was attacked by a young drug-addicted girl near Retiro railway station. The drone was peacefully lying on a sidewalk and I was busy with the camera settings. The girl passing by suddenly turned around and for some reason decided to trample a bit on our laid out equipment, all the while mumbling something incoherently. Many thanks to my guide Anna, who quickly recognized the symptoms and corrected her trajectory towards her original direction. 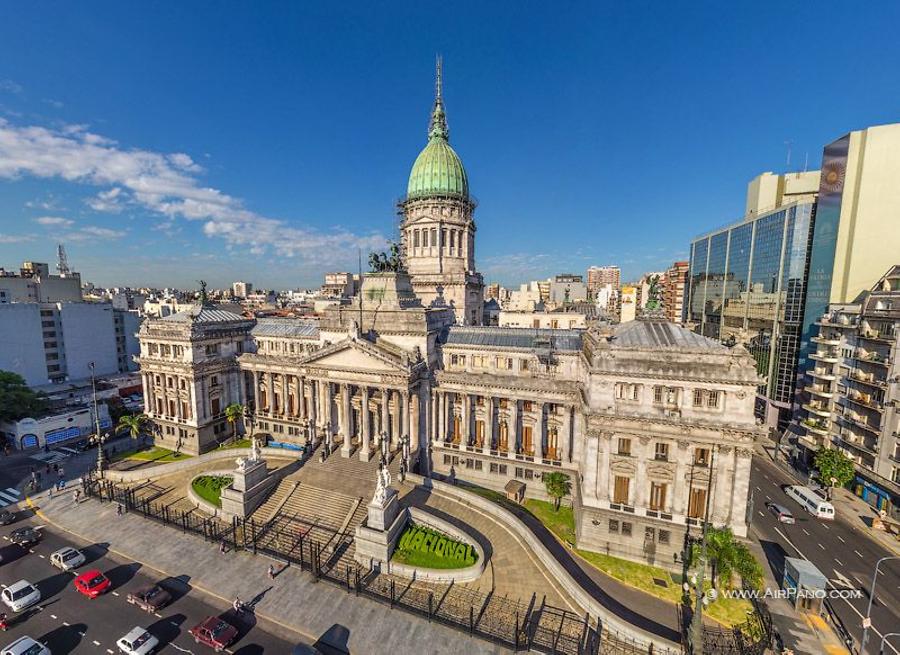 By the way, Retiro railway station was almost the only place in the city that I managed to take photos of without any technical problems. To be honest, I imagined that my work in Buenos Aires would be, in some way, an easy vacation after our Antarctic expedition. But as a result I could not relax here at all. Nearly in all central districts there were certain problems with the signal: every time the drone gained the height of more than 30-40 meters the video signal was getting lost. At higher altitude my camera started to "get mad" continuously releasing the shutter. We came across such behaviour of the equipment only once in our photography career, at the time when we making a panorama near TV Tower of Barcelona. Anna's husband, a professional engineer, guessed that most probably the problem arose because of badly regulated use of radio frequency. Everyone does whatever he wants: people use a lot of low-quality modems, WIFI routers, radiotelephones, and many other devices that interfere signals, resulting in malfunction of mobile communication and FM-radio all over the city.

Above the Matanza (Riachuelo) River
© AirPano

That evening my mind was full of sad thoughts about our Buenos Aires tour consisting of panoramas made at the height of a three story building. I was about to send a report to our office that "for technical reasons" I could not fulfill the task. But, on the other hand, I was not ready to leave Buenos Aires with its summer weather, local steaks, red wine and return to wintry Moscow. So, while having supper with the guides, we decided to try to fly higher in some uncrowded place and break through the interference area.

The next day I launched the drone in one of the local parks. As usual, after gaining the height of 50 meters, the video coming from my camera started to flicker, the shutter was releasing with no control; at the height of 150 meters I lost the image from my camera completely. The only thing, to my relief, that was working properly was my radio-variometer which used its own independent channel unoccupied by local "masters". Thus I was lifting the drone relying practically on my hearing. Finally, a sigh of relief: at the altitude of 350 meters the image appeared again, the camera stopped to release the shutter uncontrollably. That was the height I could work at. So, the limits of the interference area were identified and I was full of confidence that we would create the Buenos Aires tour! 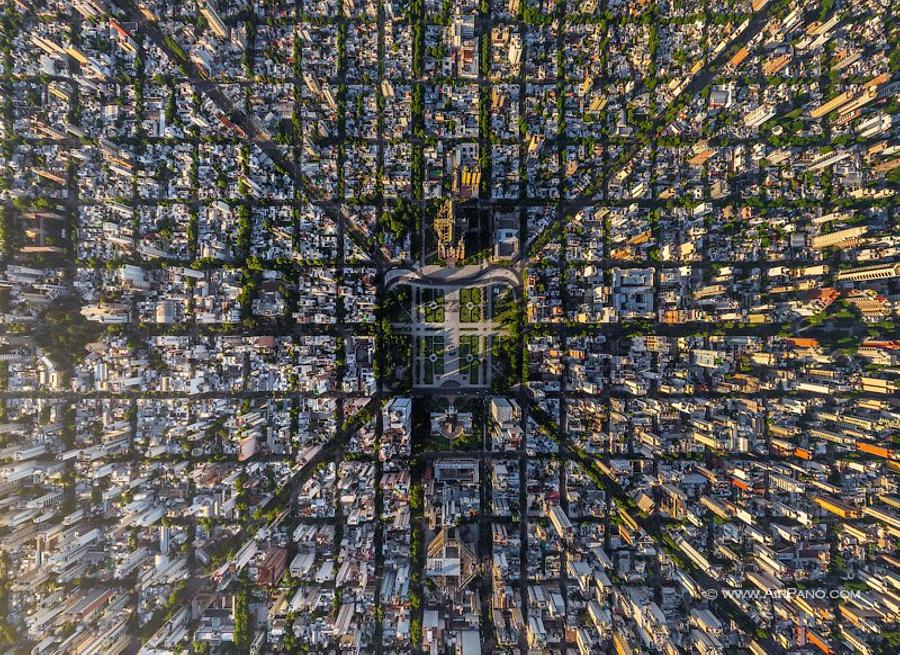 One of the main features most Argentines are proud of is football. Indeed, the Argentina national football team is one of the most award-winning team in the world. Having decided that it would be quite natural to take photos of the River Plate Stadium and to add it to our tour, we went to visit it. While flying above the stadium I noticed some motion of the field. As soon as I got closer to the field I realised that it was a training of the team hosting the stadium. At that moment we did not know that three days later this team would win the finals of The Cup of South America within the walls of this stadium. 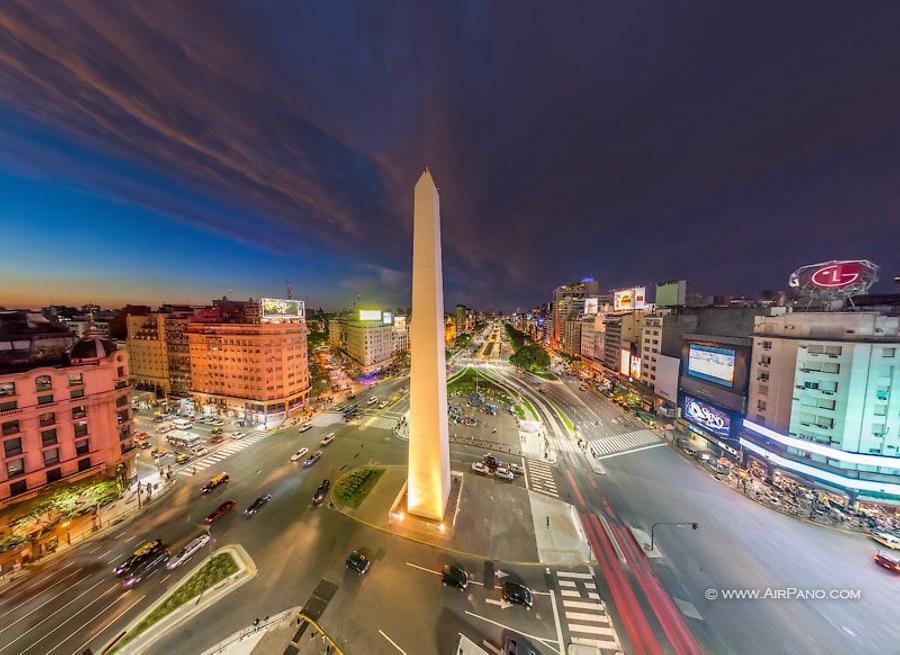 We had to give up the idea of shooting the game itself because of the police standing all around the stadium and controlling the crowds of aggressive fans. During our work me and Anna were trying to include in our tour as many important sights of the city and its suburbs as we could. We even managed to take photos of the President's mansion.

Anna managed to find out beforehand that the use of drones is not regulated in Argentina in any way. There is only one strict rule prohibiting the flight of drones near airports. That was why we were not afraid to be seen by the police. More than once policemen came up asking what we were doing, made some inquiries on the radio and wished us a nice day. During our conversation with the security near Madero Port we heard a rather funny dialogue on the radio:

- Base, base! There are some people taking photos with the help of Android (no misprint here).

- What are they taking photos of?

- Area of the district, Frigate Sarmiento.

- Ok, they can use their Android, let them go on!

This "Android case" is not typical for Buenos Aires at all. Most of the local people we spoke to had a good understanding of what the drones are and what they can be used for. Local police use them quite often for preparation of raids and monitoring of protests. It was not that locals were aggressive towards us, but it's true they were a bit suspicious before Anna could explain what we were doing and why we were taking photos of the city. 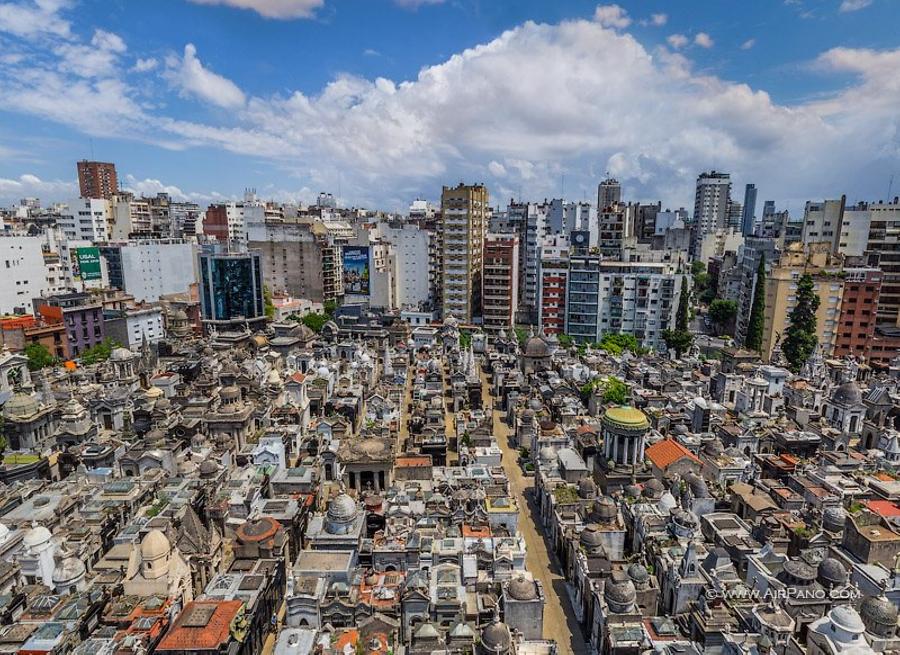 Anna is a very experienced guide, a great specialist in architecture and local sights, an expert in the history of Argentina. But she had never happened to make extreme excursions to the "bad" districts of the city before we met. As for me, I was given the task by our chief to include at least one slum district in our tour. So I chose one of the most popular (according to mentioning in blogs) slums - Villa 31 (in Buenos Aires a slum is called Villa, or Villa miseria). When I told Anna about my choice she spoke of several rather pessimistic scenarios of what could happen to us and our equipment. The main argument for not going there was the fact that criminal inhabitants of the district had quite a good understanding of what drones can be used for. If they notice us they will shoot, said Anna, no matter who we are - policemen or photographers. Nevertheless, I could not bring excuses instead of photos. In spite of the resistance of the guide, we set off to Villa 31.

Overcast above the city center
© AirPano

Villa 31 is a city within a city situated between railways of Retiro station and the port. According to the official statistics, there are more than 40 000 people living in illegally built houses, and more than 100 000 according to unofficial figures. The streets are not mapped. Electricity and communications are taken illegally from the city. Police is not a frequent guest here. Villa 31 is the home for the poorest of the citizens, generally for immigrants. 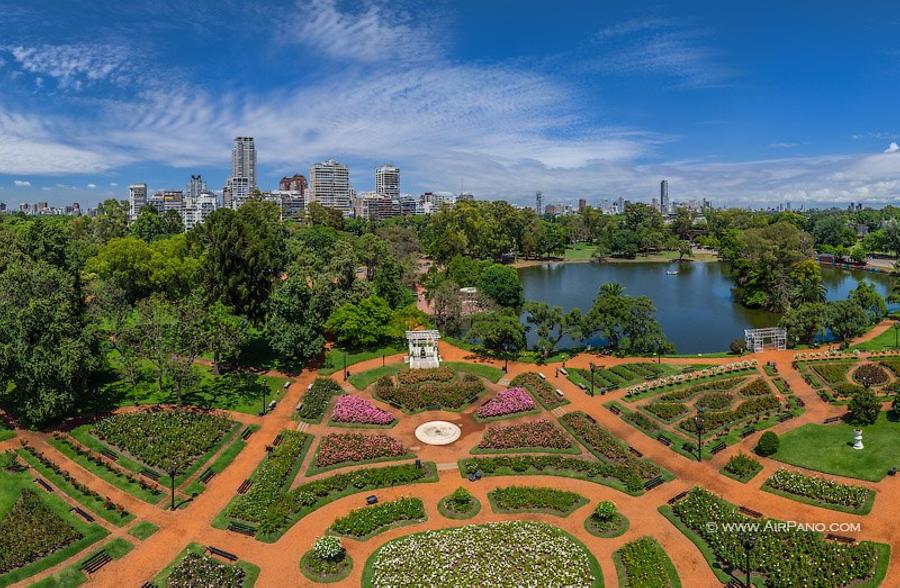 In 90s a broad highway was built, dividing Villa 31 into two parts. As far as Anna did not have any experience of visiting slums, we decided not to get into the midst of the district and try to launch our drone near railway on the border of the area. Moreover, on the over side of the railway there were several luxurious districts, so that we could create a stronger contrast in a panoramic picture. 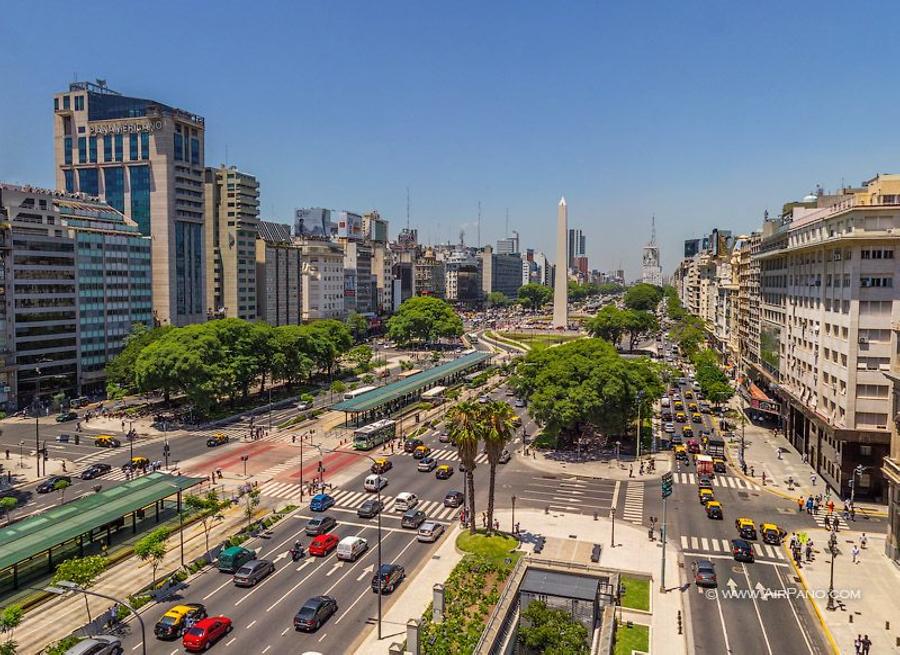 While Anna was on watch, I lifted the drone into the air and took a picture of an overall view of the area. It seemed that only railroad workers noticed our presence, so I went down and walked over the quarter using the highway as a shield. I suppose that because of the noise of the road no one could hear our drone, and, considering that it's quite difficult to notice the drone in the air, all ended well. Nevertheless, we had received a good dose of adrenalin before the drone landed. We felt a deep relief only when we were couple of quarters away from the slums. 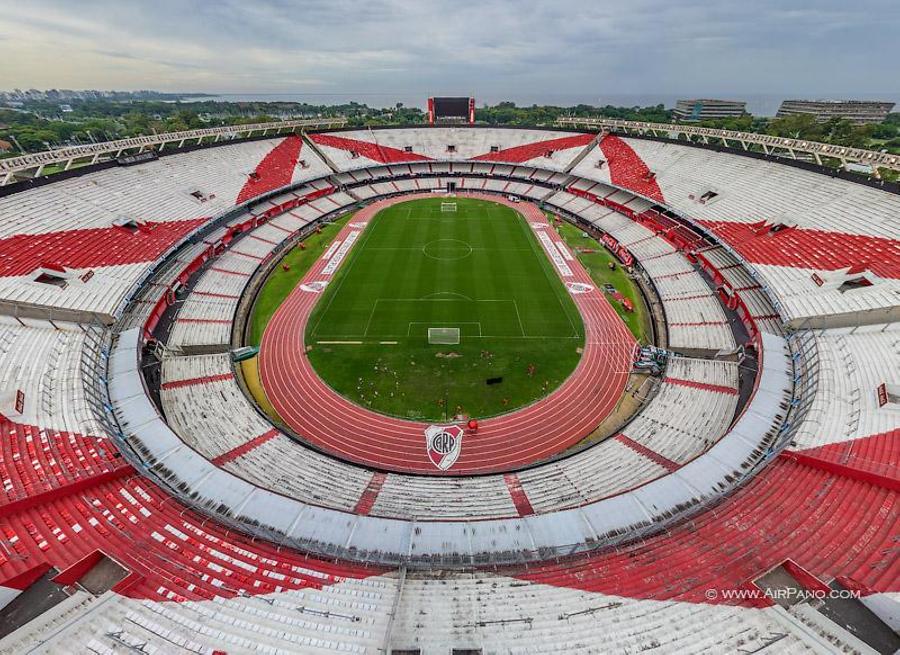 I was going home with a good impression of the city and the citizens. I really enjoyed walking through the streets of Buenos Aires, in spite of certain desolation. I was really impressed by Recoleta Cemetery and the suburb - the Tigre delta. Having returned to the cold winter in Moscow, I was looking through the shots and felt nostalgic for the warmth of the capital of Argentina. I hope you will feel a bit warmer after sinking into the atmosphere of a little summer in December 2014...