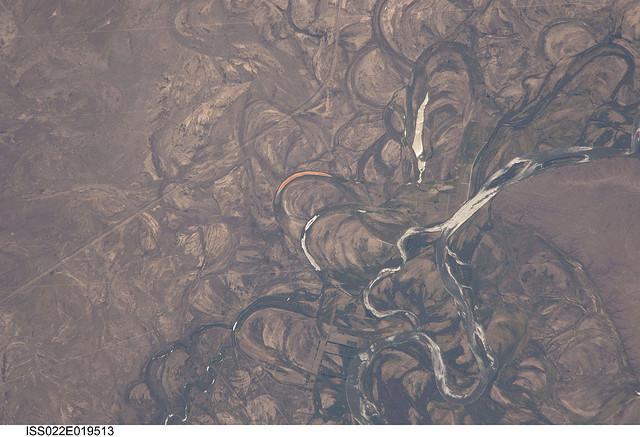 Image courtesy of NASA., under PD
The Rio Negro in Patagonia is recognizable from space as one of the most meandering rivers in South America. This phenomenon is well illustrated in this view, where the entire river floodplain (approximately 10 km (6 mi) wide) is covered with curved relics of channels known as meander scars.

The main channel of the river, flowing south at this point 60 km (36 mi) south of the city of Choele Choel (not shown) appears in partial sun glint at right. Sun glint occurs when light is reflected off a water surface directly back towards the viewer, imparting a silvery sheen to those areas.

When meander scars contain water they are known as oxbow lakes, some of which are also highlighted by sun glint in the image. Meander scars show the numerous past positions of river bends, produced as the river snaked across the plain in the very recent geological past.

The Rio Negro is a dramatic example of how mobile a river can be. The orange tint to the water in one of the oxbow lakes (center) could result from orange salt-loving algae.