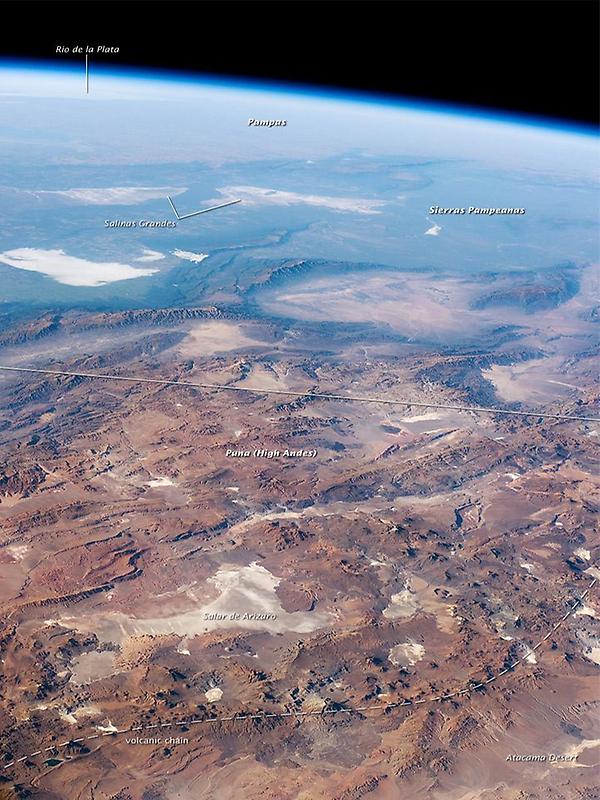 Image courtesy of NASA., under PD
This panorama looking southeast across the South American continent was taken from the International Space Station almost directly over the Atacama Desert near Chiles Pacific coast. The high plains (3000-5000 m, 13,000-19,000 ft) of the Andes Mountains, also known as the Puna, appear in the foreground, with a line of young volcanoes (dashed line) facing the much lower Atacama Desert (1000-2000 m elevation).

Several salt-crusted dry lakes (known as salars in Spanish) occupy the basins between major thrust faults in the Puna. Salar de Arizaro (foreground) is the largest of the dry lakes in this view. The Atlantic Ocean coastline, where Argentinas capital city of Buenos Aires sits along the Río de la Plata, is dimly visible at image top left.

Near image center, the transition (solid line) between two distinct geological zones, the Puna and the Sierras Pampeanas, creates a striking landscape contrast. Compared to the Puna, the Sierras Pampeanas mountains are lower in elevation and have fewer young volcanoes.

Sharp-crested ridges are separated by wide, low valleys in this region. The Salinas Grandes - ephemeral shallow salt lakes - occupies one of these valleys. The general color change from reds and browns in the foreground to blues and greens in the upper part of the image reflects the major climatic regions: the deserts of the Atacama and Puna versus the grassy plains of central Argentina, where rainfall is sufficient to promote lush prairie grass, known locally as the pampas.