by Dmitriy Moiseenko, members of the AirPano Team that is a member of the global-geography Consortium.

"Victoria" — is one of the most spectacular attractions of Africa and one of the most unusual waterfalls in the world. It is created by the Zambezi River that suddenly plummets into a narrow, 100-meters deep chasm. At the same time, Victoria — is the only waterfall in the world that is over one kilometer wide and over one hundred meters deep.

Its roar can be heard from 40 kilometers away, while the spray and mist from the falling water rises up to 400 meters and is visible from the distance of 50 kilometers. Even the rainbows are incredible here — they are of the "moon" kind: produced by the light reflected off the surface of the Moon.

The falls were discovered in 1855 by David Livingstone, the British doctor and a missionary, who named them in honor of Queen Victoria. Locals called this Nature's wonder "Mosi-oa-Tunya" ("The Smoke Which Thunders") and were afraid to even get close to it. Brave Livingstone was the first European who could cross the entire Dark Continent from the South to the North. His expedition, aimed at bringing Christianity to Africa, was accompanied by 300 warriors from one of the tribes, but only two of them dared to get close to the waterfall.

However, the traveler was not too happy about his discovery. For Livingstone, this wall of water was just an obstacle that prevented the Christians from reaching the tribes in the depths of the continent. 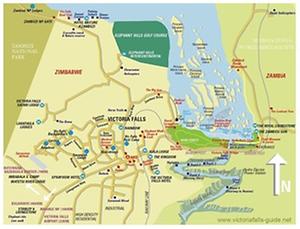 For a long time the waterfall remained practically without any visitors, until the construction of the railroad in 1905. Nowadays, this place is named a World Heritage Site by UNESCO. Locals from both Zambia and Zimbabwe have lost their fears of the "Smoke That Thunders" and they have successfully developed tourist business on both sides of the river.

Curiously, during the dry season that lasts approximately from September to December, water level in Zambezi river falls, and one can walk through the most part of the waterfall, jumping between the streams that are running down. However, at all other times, Victoria is a roaring machine, the power of which leaves an unforgettable impression.

One of the peculiar ways of entertainment at Victoria, hardly known to the mainstream tourists — is a natural pool, about ten meters wide, located right next to the cliff, next to the Livingstone's island. Just a narrow strip separates it from the deep precipice. No wonder that his place was called "Devil's Pool".

After getting into this pool the swimmer can feel how tons and tons of swirling water plummet nearby. This pool is closed during the high-water season, as the swimmers can be dragged by the current into the precipice, so the tours to this pool only start in autumn.

Victoria is not the tallest waterfall in the world (how could its 100-meter height compare with a 979-meter tall Angel in Venezuela). However, bungee jumping from "Victoria Falls" bridge is a very popular activity here. Anyone wishing to try bungee jumping is tied by the elastic cords, and then he or she plummets downwards, experiencing the thrill of the free-falling for just a few seconds. The cord stretches near the water, bounces back and about a dozen of times, and afterwards the jumper is brought up.

However, the safest way to admire the waterfall would be from the height of the bird's flight, which we offer you here.