Packing for my first trip to the Republic of South Africa, I didn't bother to research all of its sights beforehand. I thought it would be enough to focus on the most famous ones, such as Kruger National Park, Cape Town, Table Mountain, the Cape of Good Hope, and, of course, Victoria Falls easily accessible by plane, even though it's located outside the Republic of South Africa on the border of Zambia and Zimbabwe.

But, as it usually happens during trips, some things become clear only on the spot. Back in Cape Town airport I noticed huge posters with amazing mountain views entitled "The Drakensberg". I automatically switched to my "adventure photographer" mode and started searching Google for the name right away. 15 minutes later I knew that my anticipated week-long vacation on Durban beaches at the end of the trip would be cut short, because only 300 kilometers away from the ocean there was the Drakensberg National Park. They also offered helicopter tours there! 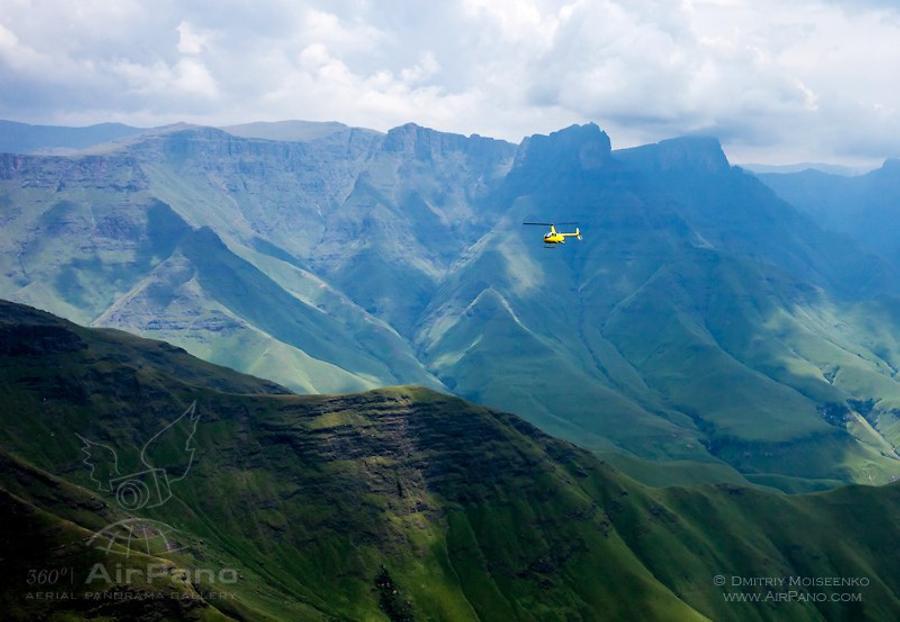 Helicopter above the Drakensberg

It's funny that most web pages dedicated to the Drakensberg have photos of a very extreme Northern end of Drakensberg range called Blyde River Canyon, which is not in the national park Kwazulu Natal. So pay attention and don't try to find that view here. 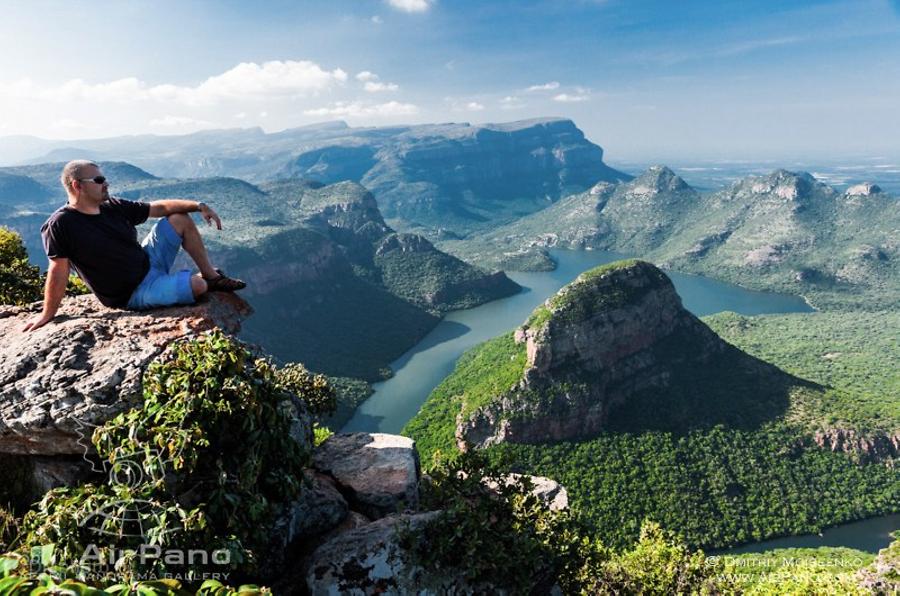 At the age of Blyde River Canyon

I don't know about the exact origin of the name, but according to one version, clouds and fog hanging over the slopes of the mountain are reminiscent of a hot steam exhaled by a dragon. They were right about the fog! Having woken up before dawn, I searched for a good shooting spot only to find a thick veil of mist that practically hid the entire mountain. The sun was rising, and the fog was slowly clearing up. It was time to go to a heliport. 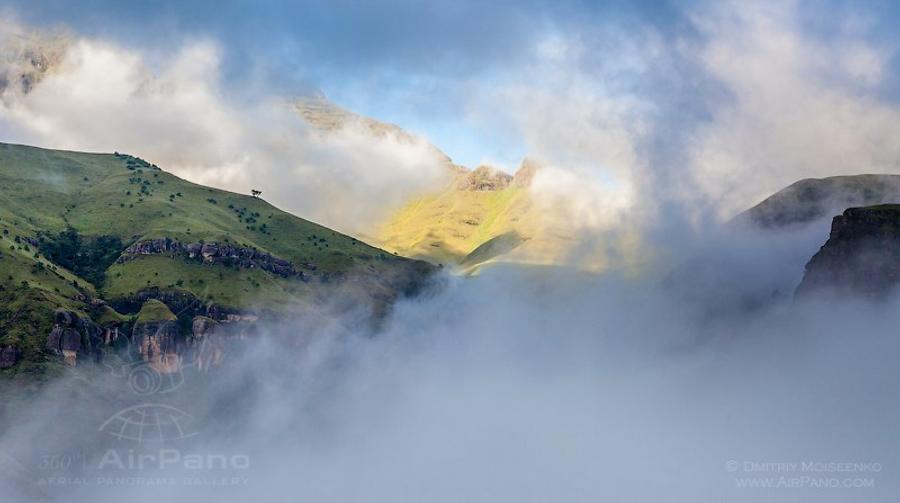 Fog at the mountains

The most beautiful sights of the Drakensberg are located in the uKhahlamba Drakensberg Park (there is no spelling mistake here! It is the ancient name of the mountains meaning "barrier of spears"). Some of its parts are accessible by a helicopter, with the only exception of Amphitheater, which is off-limits for some reason.

Flights are highly dependent on weather conditions. Having spent a few hours at the computer looking for holes in heavy clouds over the mountains (while it was bright and shiny at the foothills), the pilot and I decided to try our luck anyway. The only thing that worried him was accidentally crossing the border of Lesotho, a mysterious country located entirely within the Republic of South Africa, with borders running along the top of the mountains. However, it seemed that Lesotho citizens were too lazy to monitor their border — I didn't see any border patrol units or radar stations. 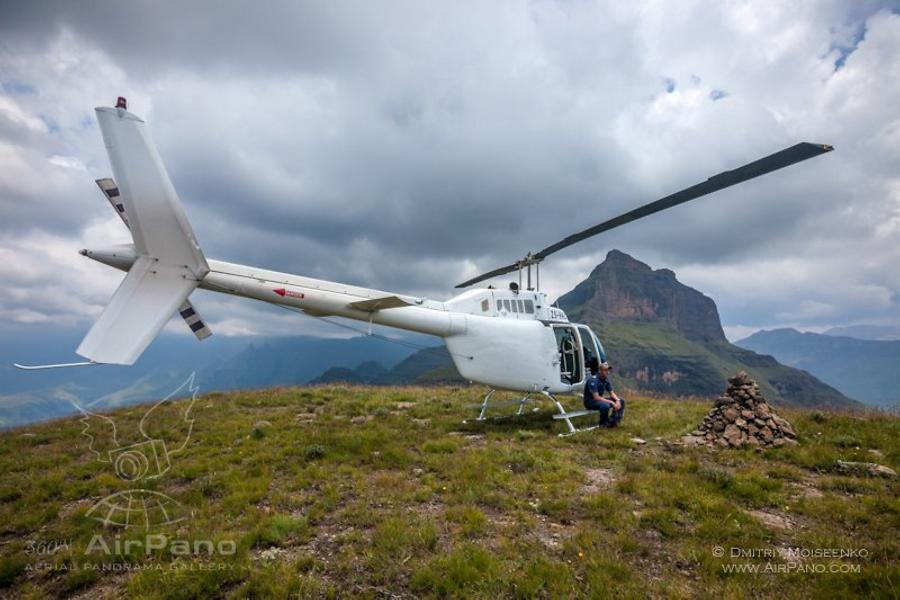 Preparation to take off

Looking for holes in heavy clouds, we took off. 10 minutes later we were flying over the mountains, quickly passing cloud formations, while the pilot was focusing on keeping the helicopter above the rocks in strong wind conditions. The view was very beautiful, but scary at the same time. Finally I realized why it was called the "Drakensberg" — located opposite to each other, there were straight rows of vertical cliffs cut by crevices. All together it looked like a huge beast's jaw with sharp teeth. Clouds covered the sun, and I felt really uncomfortable, so I took few panoramic photos and asked the pilot to leave this gloomy place. 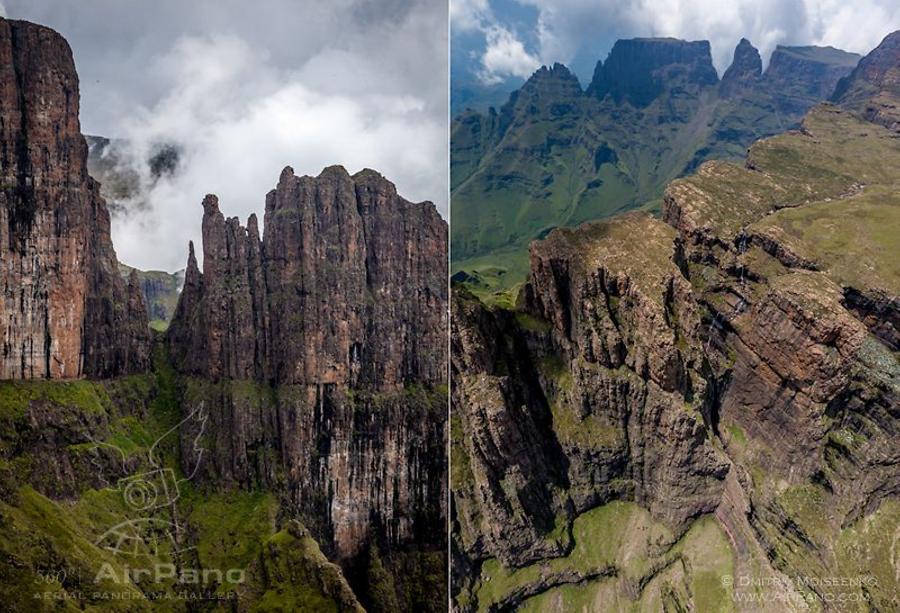 "If Amphitheater is off-limits, I'll just photograph something else," I thought to myself and took a car to the part of the mountains that was called Royal Natal National Park.

But Dragons mocked me! Evening sky was very cloudy, and only a weak sunray illuminated my path; and in the morning the sky was clear with bright sun, and beautiful Amphitheater. Shining sun means that I can safely fly over the mountains! A few hours later I was sitting beside an open door of a helicopter. Illuminated "dragon's teeth" seemed not so dangerous anymore, streams and waterfalls sparkled in the sun, and we didn't expect any attack on our aircraft from Lesotho territory. 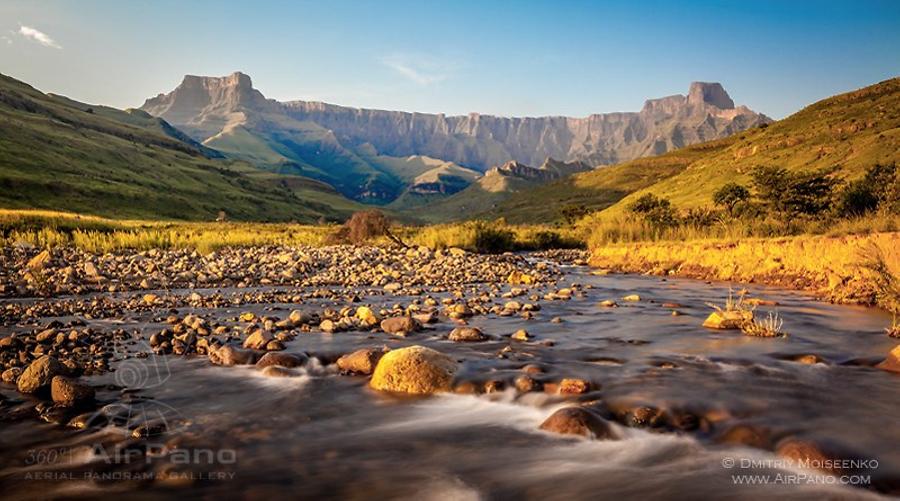 And here are few official facts about the Drakensberg.

AirPano team had previously photographed sights of the Republic of South Africa, including the Cape of Good Hope and Cape Town. Now we want to tell you about another outstanding monument of South Africa: the Drakensberg (Dragon Mountains).

It's one of the highest mountain ranges in the country. It has an average height of 2,000 meters; two of its highest peaks (Mafadi and Thabana-Ntlenyana) are 3450 and 3482 meters high respectively. The Drakensberg is situated on the territory of three countries: South Africa, Swaziland, and Lesotho. The latter one deserves a special mention — it is a unique enclave within the Republic of South Africa, and it's surrounded by the Drakensberg Mountains in the east and south. Moreover, local mountain trekking routes are considered to be the best in Africa.

Listed as a UNESCO World Heritage Site in 2000, the Drakensberg is a beautiful mountain range cut by numerous rivers. You can also see Tugela Falls that drops in five free-leaping falls from the eastern cliff. The highest of them (411 meters) drops water with an average speed of 1 cubic meter per second. The total drop in five free-leaping falls is 948 meters, which makes Tugela Falls the second highest waterfall in the world after Angel Falls in Venezuela. Tugela sometimes freezes and forms dazzling ice columns. Over the waterfalls you can see the Mont-aux-Sources Mountain, the source of Tugela River considered one of the biggest in South Africa.

They say that these lands inspired Tolkien, who was born in South Africa, to write his epic "Lord of the Rings" novel. 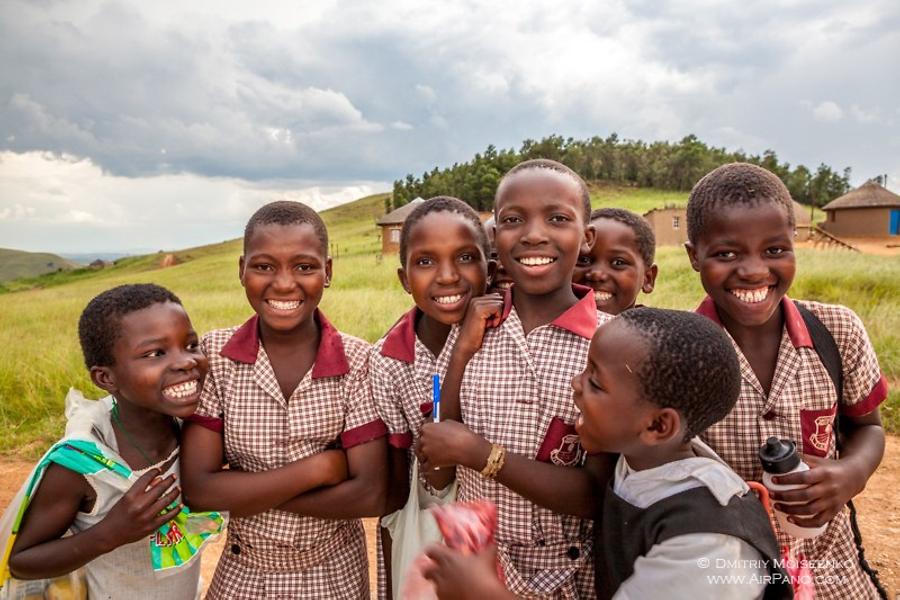 The Drakensberg Mountain in South Africa is not like any other mountain range in the world. Here one can find peaks next to completely flat tops, and rainforests next to meadows and savannas. Historically, this area was inhabited by the Bushmen (a collective name for indigenous African tribes). Little is known about the Bushmen of the Drakensberg. Their last group was seen here in 1878, and then they disappeared, leaving behind the only reminder of their existence — amazing rock paintings. The paintings are unique not only because of their good condition, but also because of the variety of subjects: hunting scenes, religious ceremonies, and peaceful life depictions reveal every little detail from the history of these mysterious ancient people.

Currently about 40,000 pieces of the Bushmen art were found in the Drakensberg. This is the largest collection of its kind in the world. 20,000 individual rock paintings are located within five hundred different caves and on the mountain slopes. It is hard to determine the exact age of the paintings based on used pigment, so it is believed that the oldest one was made about 2,400 years ago.

The Drakensberg is rich in various minerals: coal, manganese ores, tin ores, gold, and even platinum. Finally, nothing can compare to the Drakensberg's flora and fauna. Of 2,153 plants 119 are listed as endangered, and 98 are endemic, which means that they can't be found anywhere outside these places. It is a home to 299 bird species; and among unique animals there is endangered white rhino and white-tailed gnu.

It's not surprising that two million tourists visit this natural monument in South Africa every year. If for some reason you can't join their ranks, you have an opportunity to take our virtual tour. It will allow you to at least partially witness the beauty and grandeur of this famous South African landmark.

6 Panoramas of The Drakensberg - Dragon Mountains