The discovery of Cape of Good Hope — a geographic location with one of the most romantic names in the world — is due to Portuguese navigator Bartolomeu Dias. At the end of the 15th century Portugal was literally obsessed with discovering the seaway to India sending one expedition after another. In 1487 this task was entrusted to Dias.

His voyage, as well as his predecessors', was filled with adventures, shooting incidents with local tribes, and threats of mutiny from his crew. Dias ended up sailing only around Africa thinking that if one continues to sail forward, he would arrive to India sooner or later. After coming to this logical conclusion he turned around, and on his way home in May of 1488 he landed at what he thought was the southernmost point of Africa.

The debarkation was not easy — the storm almost wrecked their ship on the cliffs. As a result, Dias named this place "Cape of Storms" and returned to Portugal with peace of mind. But the King Juan the Second thought that the name was too shortsighted: who would want to discover India through such obstacles? So he changed the name to the Cape of Good Hope envisioning that the sea route to India would be well travelled one day. The expedition, led by famous Vasco da Gama, became a success. By the way, he owes his fame to this voyage as it made him the first European who sailed to India. On July 8th, year 1497 the expedition made a grand exit out of the Port of Lisbon and by November of the same year sailed around the Cape of Storms, or to be precise, the Cape of Good Hope. Needless to say that the storms continuing for days and days made it very difficult and caused a damage beyond repair to one of the vessels...

However, the heroic deeds of the explorers were not in vain, as now humanity possesses not only the sea route from Europe to India but also an outstanding tourist "attraction". Who wouldn't want to boast about standing on the most southern point of the African continent gazing at the vastness of the ocean and knowing that the only closest land is Antarctica?

Centuries later, with the development of cartography, it became clear that "the southernmost point in the continent of Africa" was not the Cape of Good Hope but the Cape Agulhas located 155 km southeast. However, by that time, tourists already made their way to the "imposter" discovered by Bartolomeu Dias so the government decided to simply change the plate to read "The Most South-Western Point of The African Continent"

Even this change didn't go without a trick! After arriving to Cape of Good Hope by bus tourists first ride the cable cars, then take a long walk to a high, beautiful, long stretching outbound cape with a panoramic view of the mirror-like ocean, where they take classic photos in "Me and The Most South-Western Point of Africa" style. However this cape, named Cape Point, is not really the most southwestern one.

The real most southwestern point of the African continent is actually situated several kilometers away — it's an unremarkable place by the water, with a small parking lot nearby and an official plate that reads "The Most South-Western Point of The African Continent" (see photo below). This location is hardly known and is visited by less than 10% of all tourists that come to the Cape of Good Hope 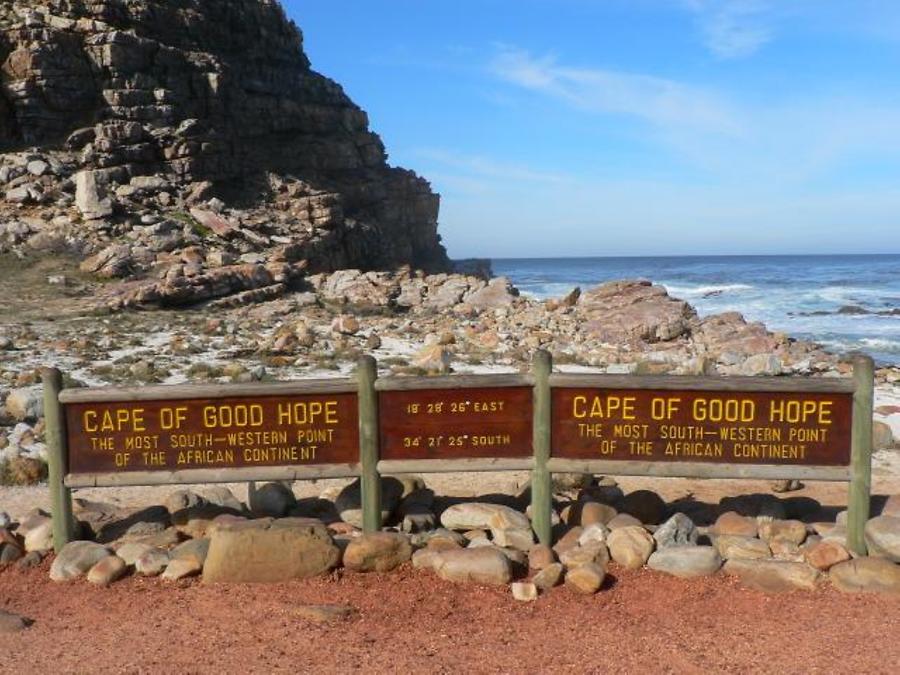 Visitor of our website has pointed that the official sign says wrong latitude (23 degrees instead of 33). Photo above with wrong sign was taken in 2003. We found photo in the web of this sign of 2006, there you can see that wrong coordinates have already been fixed.

3 Panoramas of Cape of Good Hope