The archipelago of Seychelles is considered to be a corner of paradise: summer reigns here all year round. During the "hot" season the temperature stays at +29?, and with the "cold" season it drops only a few degrees. 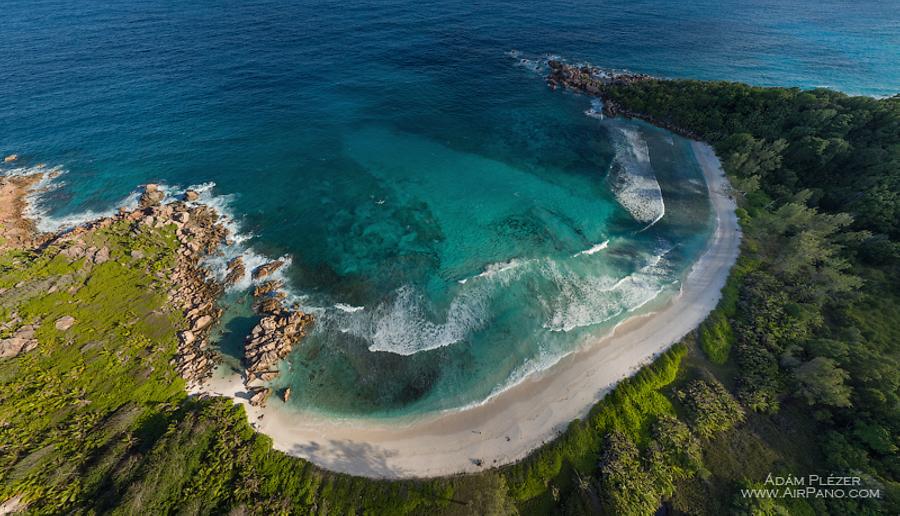 The mild climate, pristine beaches and picturesque landscapes have attracted tourists here since long ago. With the opening of the international airport in 1971, the number of visitors started to increase rapidly: in the end of the 20th century the number of tourists coming here annually was 116,000 people, and in 2015 their number rose to 230,000. At the same time, the Seychelles government keeps to a strict ecological position: any initiative regardless its commercial nature should be considered from the conservational point of view. Soon after the scientists had estimated the critical "capacity" of the islands to be around 150,000 people a year, all the resorts started to limit the number of available visits. In addition to that, the prices were raised so now the Seychelles is a place of the luxurious recreation where one can enjoy the harmony with nature. 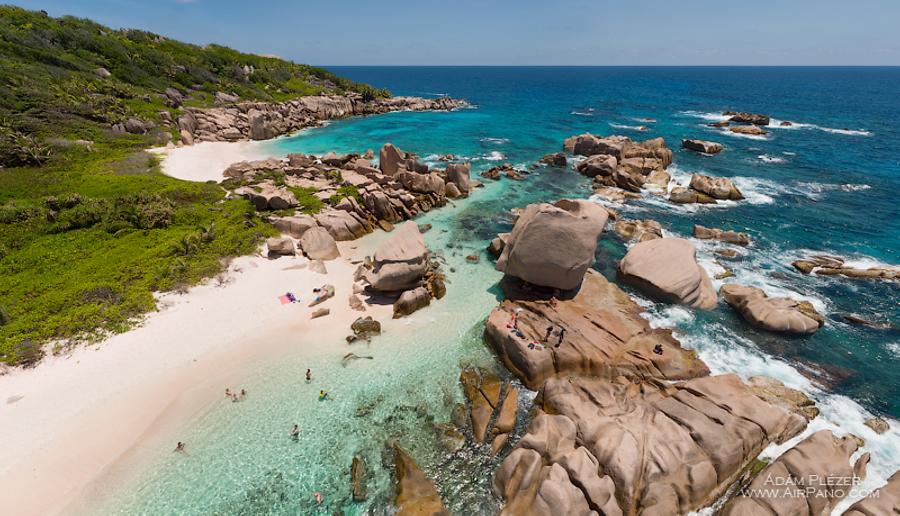 The archipelago consists of 115 islands with only 33 of them being inhabited. Some of them are granitic, but the majority of them are coral. Ádám Plézer has captured several beaches of this corner of paradise.

La Digue is the fourth largest granitic island of the Seychelles with the area of only 10 sq. km., but still having on its small territory a number of hotels and Veuve Nature Reserve. The beaches of this island are interesting for having granitic formations standing out of the water and making the coastline look unusual and enigmatic. The deserted, tiny and "secret" beach of Anse Marron (only 10x3 meters) is among them. The beach Grand Anse is a little bigger: 450x20 meters, but even this one is relatively "wild" so that not so many tourists come here. Anse Source d'Argent is a truly popular beach; it is a giant compared to other beaches with the area of 1,100x20 meters. One more distinctive feature of this beach is the coral reef, making this place even more attracting. 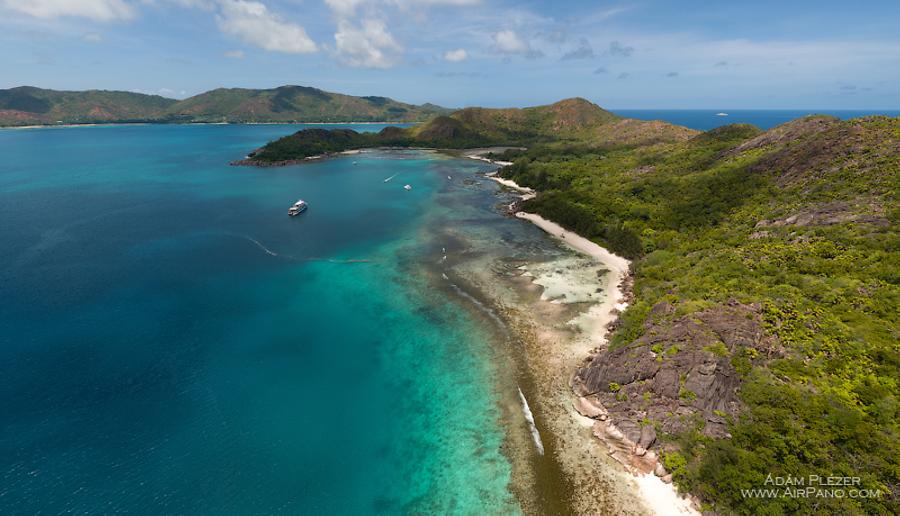 Anse Cocos, a beach situated not far from Grand Anse, allows seeing an absolutely different landscape, rather unusual for Seychelles: the complex of abandoned buildings. They had survived since the times when the tourism was not developed and the chief export of the archipelago was copra. Together with bright turquoise-coloured water and flamboyant vegetation, this abandoned village looks truly extraordinary. 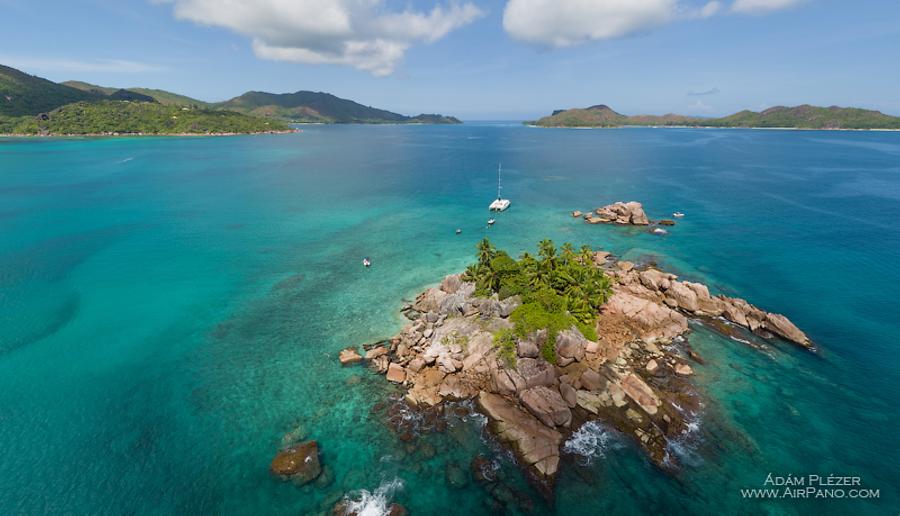 St. Pierre islet off the coast of Praslin. Seychelles
© AirPano

The second largest island of the archipelago is Praslin with its 38.5 sq. km. The beaches of this island compete with each other for being the most beautiful one. Among them, a popular beach Anse Georgette and a small island of St. Pierre that belongs to the waters of Praslin. The landscapes captured in this particular place more often than others are used in advertisements of the Seychelles recreation. 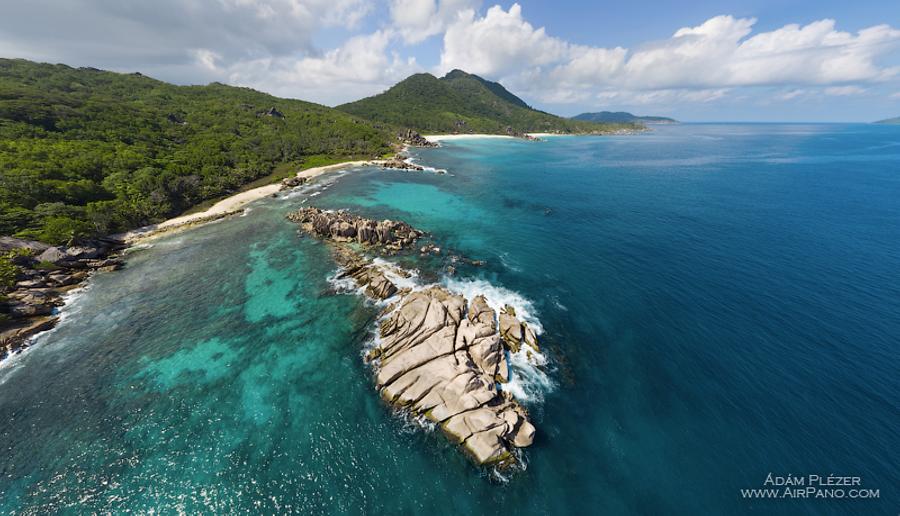 One of the most popular (and certainly one of the most beautiful!) beaches is Cote d'Or. Not far from it there is Mango Lodge. It gained its name due to its location: it is situated in a mango grove allowing to enjoy the marvellous seascapes and the beauty of the tropical trees. 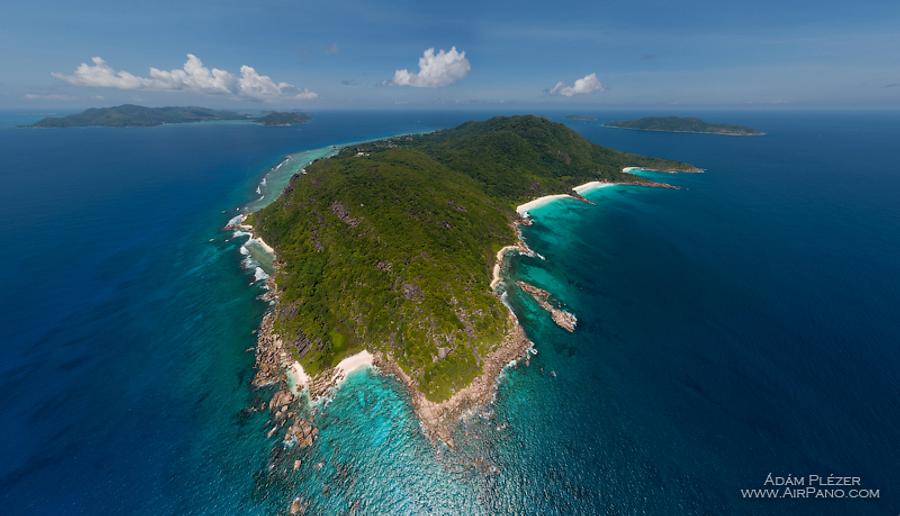 To the north of Praslin, there is a small granitic island of Curieuse. Here one can have a rest on a beach, do some diving, but in the first place, the island is famous for its nature. Curieuse is a home for around 500 giant tortoises and it is the place of hawksbill sea turtles coming out of the water. This animal lays clutches of eggs into the sand and then returns to the sea. Two months later baby turtles hatch out and crawl into the sea. So, the beach of Anse Papaie is one of the unique places where you can witness this miracle of life. 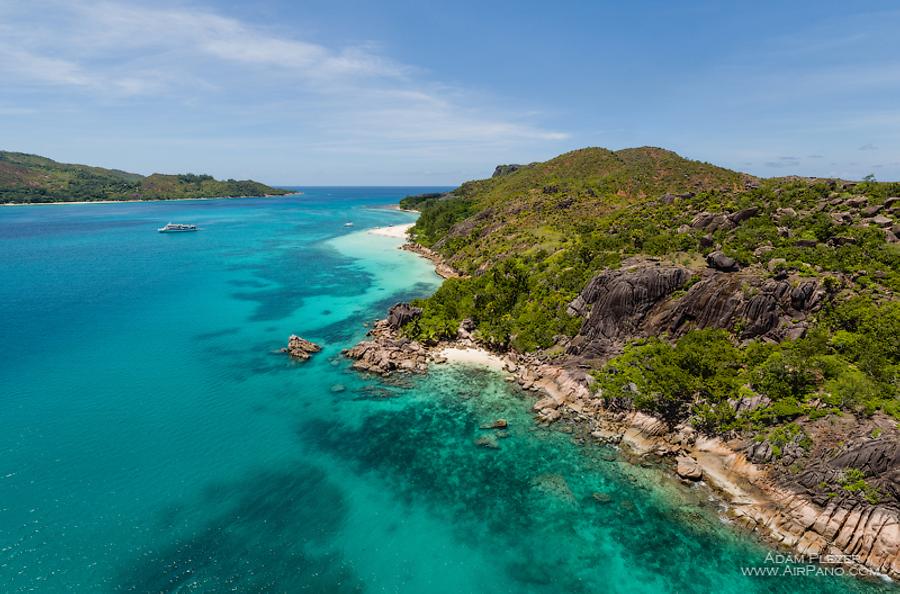 In addition, both the waters and the land of Curieuse are the habitat of rare representatives of fauna, so the whole island is the nature reserve. You can visit this and other marvellous places of the Seychelles without any harm to nature with the help of AirPano panoramas!