Aldabra and the Outer Seychelles#

Aldabra and the Outer Seychelles islands

When speaking about coral reefs, we usually imagine an underwater "kingdom" with colourful fish and sea stars scurrying around bright branchy corals. But there are also coral reefs existing above the sea surface. They are known as raised (or uplifted) coral atolls: they were lifted high above sea level by tectonic forces, then the wind brought soils that enabled species of flora and fauna to develop here. 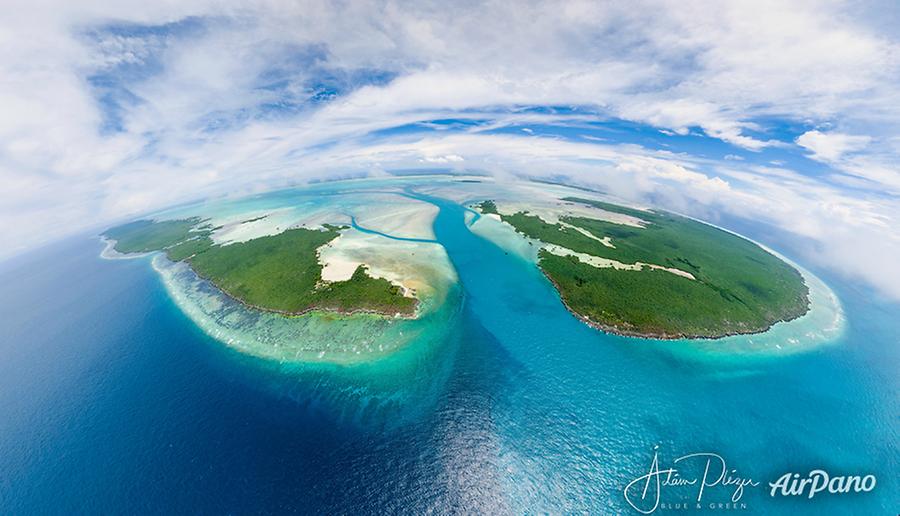 The largest formation of this kind reaches 8 meters in height: it is Aldabra atoll in the Indian Ocean. It is a part of the Outer Islands of Seychelles located in the south-westernmost point of the archipelago, but it doesn't look anything like other islands of Seychelles. The overall area of Aldabra is 155 sq km (34 km in length and 13 km in width) and according to these figures, it is the world's second largest coral atoll after Christmas Island in the Republic of Kiribati.

The atoll consists of 4 large and around 40 smaller islands located inside the lagoon measuring 224 sq km. There are no settlements in Aldabra, but there is a scientific station with 12 biologists working here while tourists can visit this place by a prior reservation only and their number is strictly limited. 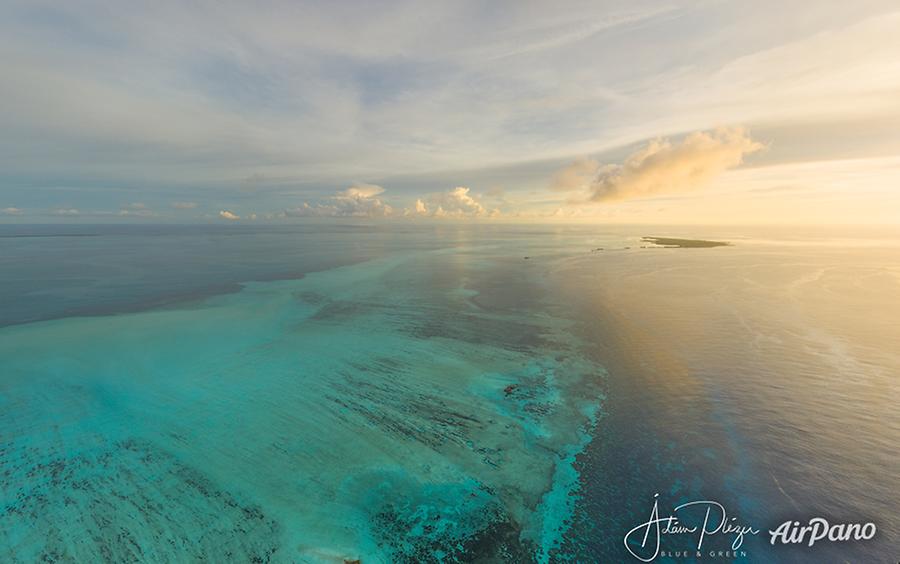 In fact, Aldabra is the only raised coral atoll that has not suffered a harmful human impact. This place is entirely in the power of nature. The overall number of plant and animal species in Aldabra is 307. This kind of diversity has provided the atoll with the title of "one of the crown jewels of the Indian Ocean". But once there was a danger of losing all this treasure: in the 60ies, the British planned to build a military base in this place. Fortunately, this project was not fulfilled, but even a short-term presence of people has caused certain damage: a number of invasive species (such as cats and rats) were brought here together with the arrival of people so that the most vulnerable plants and animals couldn't survive "turf battles".

In 1982, Aldabra atoll was designated a UNESCO World Heritage Site, so now the conservation measures are fully and strictly respected. The island possesses endemic species of orchid, lily, the rarest mangrove trees that are only common to this area and exist nowhere else on the planet. In addition, a very unusual mixture of grasses and herbs called "tortoise turf" can be found here and enables the existence of the largest population of giant tortoises that counts around 150,000 animals. The absence of people has also created conditions for a good living of crabs, blacktip reef sharks, stingrays, rare fish, birds, lizards, whales, turtles and other representatives of the local fauna. 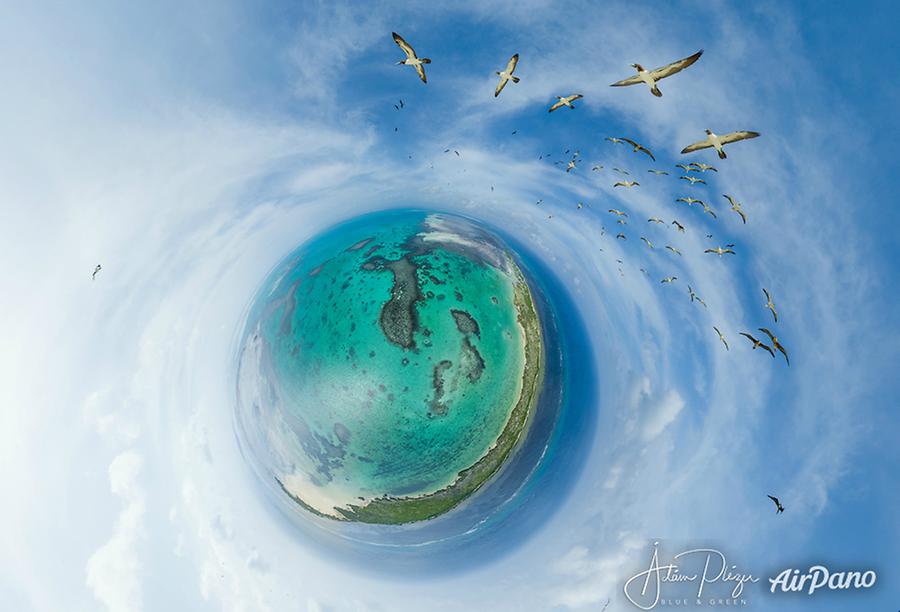 The virtual tour dedicated to the Outer Seychelles Islands was created by a friend of AirPano Adam Plezer. In addition to Aldabra atoll, it also includes the panoramas of Cosmoledo. This atoll measuring only 5.2 sq km is a home for the largest colony of all the three species of boobies that are common for Seychelles. As Cosmoledo is located close to Madagascar, it has also become a home for Madagascar endemic species, such as Malagasy white-eyes and turtle doves and Souimanga sunbirds. The atoll is also a nesting place for sooty terns, sandpipers, pied crows and other tropical birds.

630 kilometres to the north-east of Cosmoledo there is the Alphonse Island Group. Only 3 islands are hiding behind this majestic name, but all of them are homes for a great number of unique birds and crabs. The largest island of the Alphonse Group bears the same name and is inhabited by 300 people with the majority of them working in a conservation centre belonging to the neighbouring atoll that includes St. François Island and Bijoutier Island. 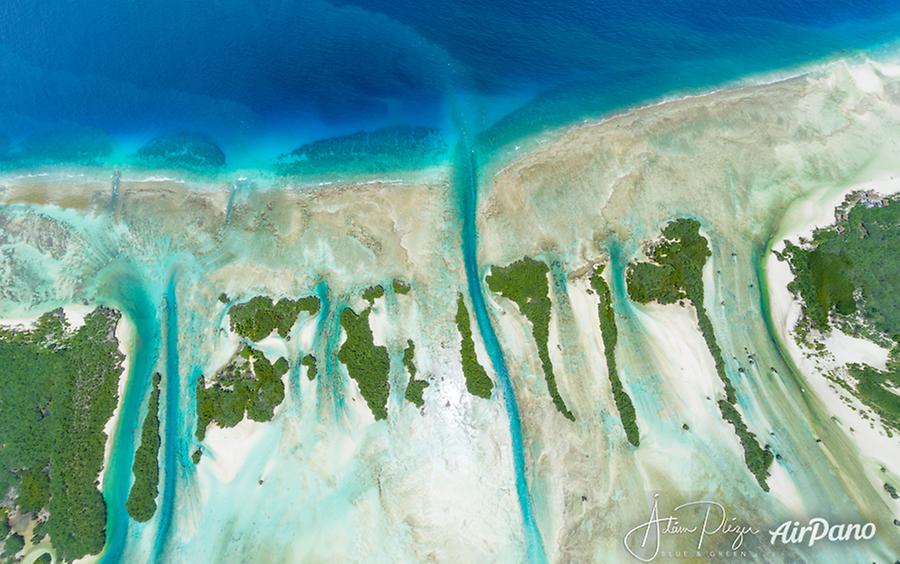 A little to the north, there is Desroches Island. Even having the length of only 5.5 km, it is still the largest island of the Amirante Islands. Desroches is covered with coconut palms, and its beaches are the place of laying eggs of two turtle species.

Another atoll which is a part of the Outer Seychelles Islands is Farquhar with high sand dunes rising at up to 10 meters high. This area is inhabited by turtles and lizards, while the largest bird colonies were created by terns and other birds. An interesting video was filmed by BBC reporters in this place.

Have a look at these wonderful places: remote and splendid!

18 panoramas of Aldabra and the Outer Seychelles