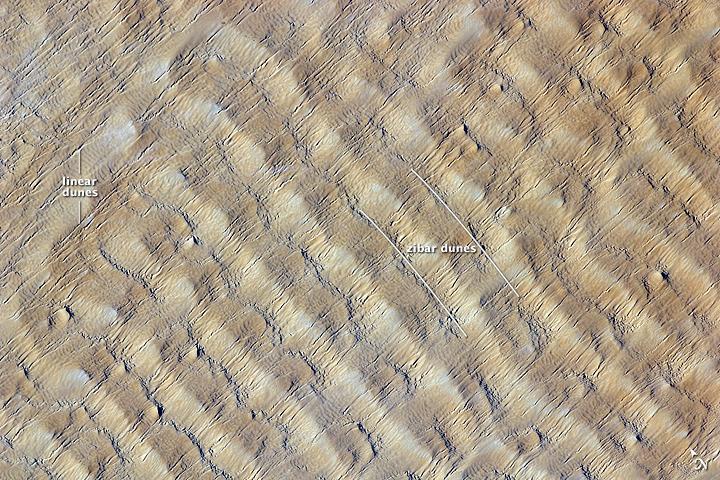 Image courtesy of NASA., under PD
This detailed astronaut photograph highlights sand dunes in the Fachi-Bilma erg (sand sea) in the central-eastern part of the Tenere Desert. The Tenere occupies much of southeastern Niger and is considered to be part of the larger Sahara Desert, which stretches across northern Africa.

Much of the Sahara is comprised of ergs; with an area of approximately 150,000 sq km (57,915 sq mi), the Fachi-Bilma is one of the larger sand seas. Two major types of dunes are visible in the image. Large, roughly north-south oriented transverse dunes - known as zibar dunes - fill the image frame.

This type of dune tends to form at roughly right angles to the dominant, northeasterly winds. The dune crests are marked in this image by darker, steeper sand accumulations that cast shadows. The lighter-toned zones between are lower, interdune "flats." The large dunes appear to be highly symmetrical with regard to their crests, which are composed of coarser sediments.

A second set of thin linear dunes oriented at roughly right angles to the zibar dunes are formed from finer grains in the same wind field as the larger zibars.