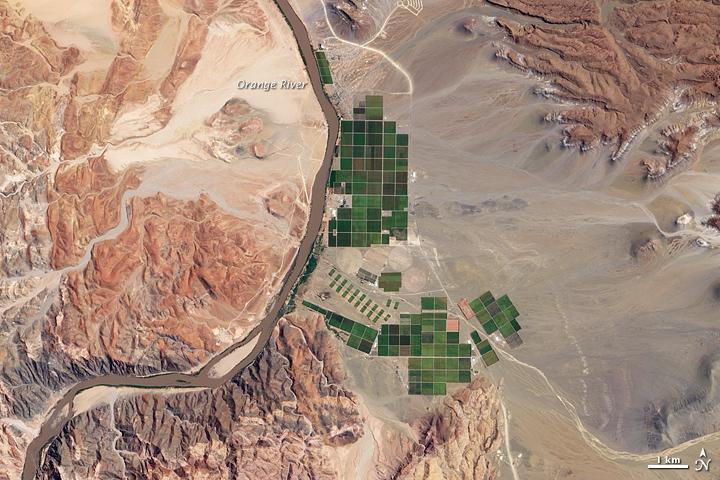 Image courtesy of NASA., under PD
The Orange River serves as part of the border between Namibia and the Republic of South Africa. Along the banks of this river, roughly 100 km (60 mi) inland from where the river empties into the Atlantic Ocean, irrigation projects take advantage of water from the river and soils from the floodplains to grow produce, turning parts of a normally earth-toned landscape emerald green.

A network of bright rectangles of varying shades of green contrasts with surroundings of gray, beige, tan, and rust in this true-color satellite image. Immediately south of a large collection of irrigated plots, faint beige circles reveal center-pivot irrigation fields, apparently allowed to go fallow. This Namibian irrigation project occurs along a section of the Orange River where the waterway turns north on its general westward path to the sea, not far from the eastern margin of the Namib Desert.

Due to local climatic conditions, grapes from Namibia, the primary agricultural product of this area, are often ready for market two to three weeks before those of the main grape-producing regions of South Africas Cape.