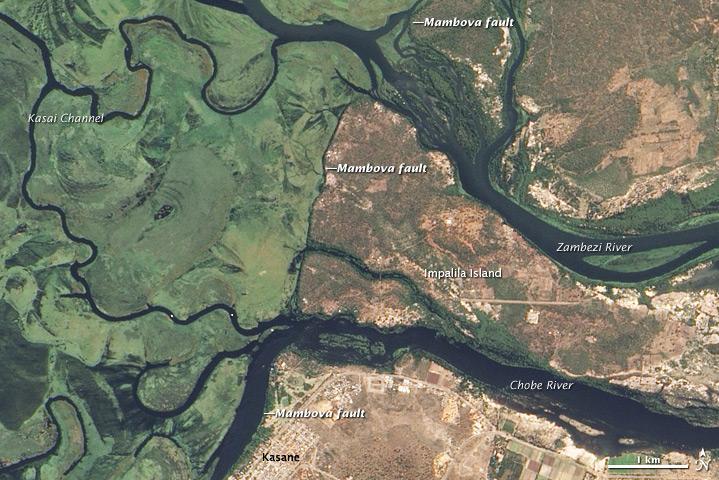 Image courtesy of NASA., under PD
The Zambezi River is one of the great rivers of Africa. Originating in swampy wetlands in Angola in southwestern Africa, the river flows 2,736 km (1,700 mi) across the continent to the Indian Ocean.

This highly detailed true-color satellite image shows the stark eastern edge of the floodplain. To the left of the edge, deep blue channels wind among green, shallowly flooded plains. To the right of the edge, the land is dry. The city of Kasane is situated along the edge of the flood plain near the bottom center of this image.

Floods on the Zambezi occur when heavy rains fall on the wetlands in Angola and Zambia. The water flows downstream and gets backed up at the Mambova fault. The river expands over the flat floodplain behind the fault until the waters meet the channel cut by the Chobe River in the south.

During the annual flood, the build up of water from the Zambezi River overcomes the Chobe, and water begins to flow south into Lake Liambezi.